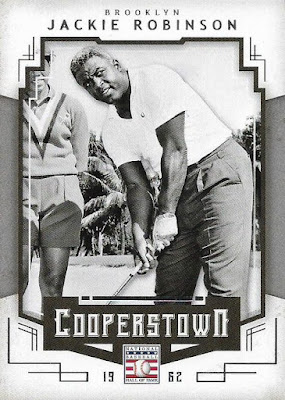 I've just returned home from attending my father's funeral and all the other family stuff that went along with it.

I'm hoping to get back to some semblance of regular living -- and posting -- at this point (although one of my busiest periods of work all year is about to smack me in the face tomorrow). But before I jump fully into "moving on" mode, I'd like to thank everyone who left their condolences for my mom and dad's passings.

I'm particularly grateful to those who reached out via email to let me know they were thinking of me.

Along those lines, I did receive at least one card package that showed signs of being a sympathy package, or what I would call a card care package.

Doug from Sportscards From The Dollar Store sent a bunch of nifty cards along with a note that said "thought you could use a pick-me-up." Wow, thanks Doug. Cards are the very best way of saying you care.

Per usual, this package from Canada's Ontario province spanned my three favorite teams for baseball, football and hockey. 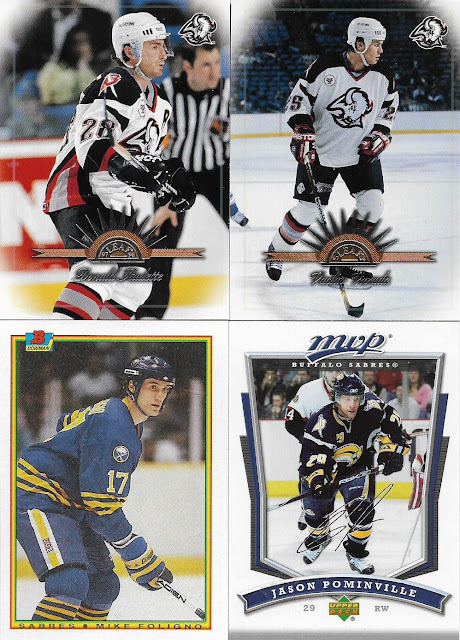 Just a small grouping of Sabres, which is cool because I just haven't prepared enough space for my hockey cards. 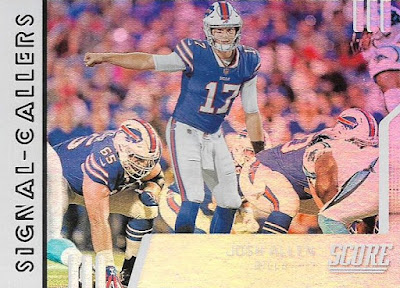 There were a few more Buffalo Bills, mostly from Panini's 2019 Score product. I don't fully understand issuing a football product in the early months of the year, but I'm sure it makes sense to the modern football card collector. 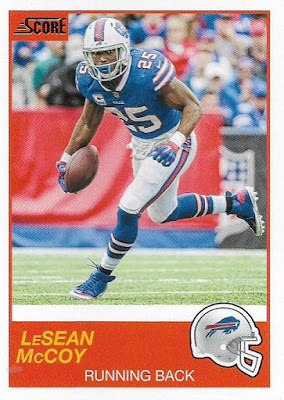 What I do like is Panini's design treatment of the Score brand. It's difficult for me to describe what makes Score "Score" from a design aspect, but this naturally appeals to me. It looks the way a trading card should look. 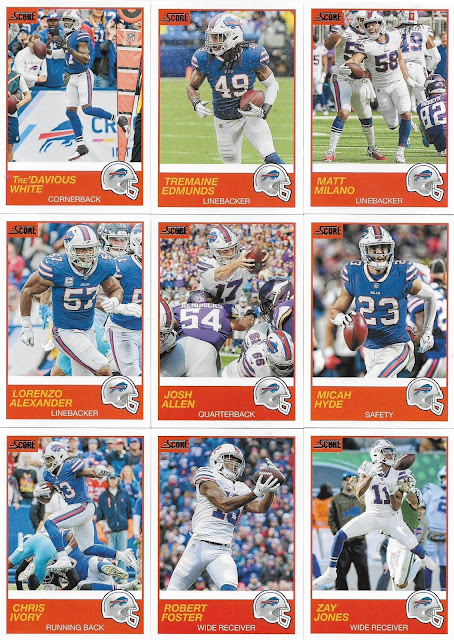 All of that together, isn't it great? Nothing complicated. But everyone knows it's a trading card. 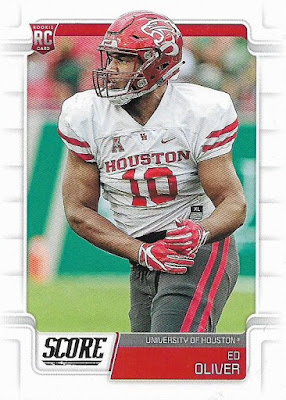 Panini felt obligated to interject a bunch of college football dudes into its Score product, which I wish it wouldn't do (if I actually collected football, I'd feel more justified in complaining about this).

A few more college football dudes that Doug is telling me have a connection to the Buffalo Bills. I'm reserving judgment until I see them in an actual Bills uniform during an actual Bills game. The NFL draft doesn't determine who is on the roster. 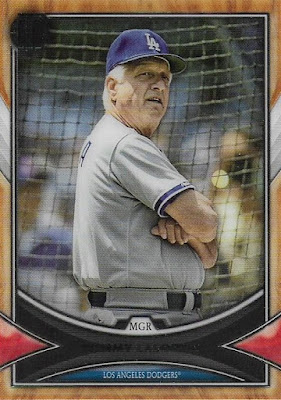 The rest of the cards contained a pleasant Dodger theme and a fancy one at that. This is a typically chunky Topps Tribute card of the notably chunk Tommy Lasorda. Still going strong. 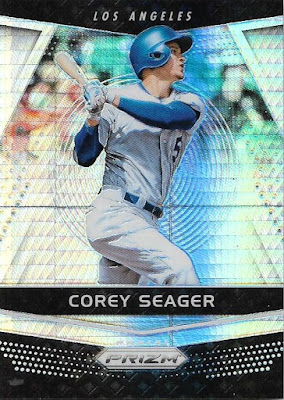 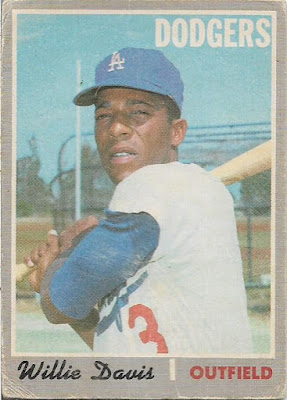 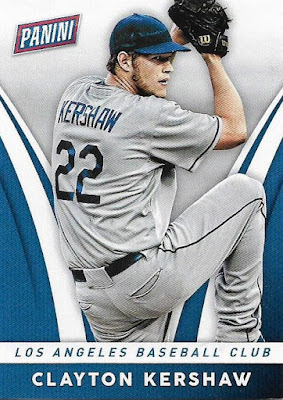 These three cards all need the reverse side to explain what they truly are. 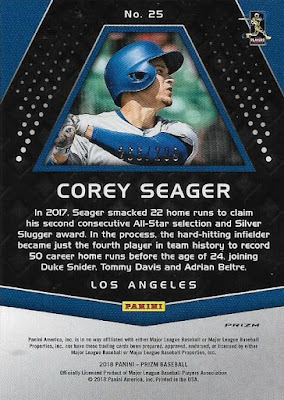 The Seager card is numbered (there on his arm). 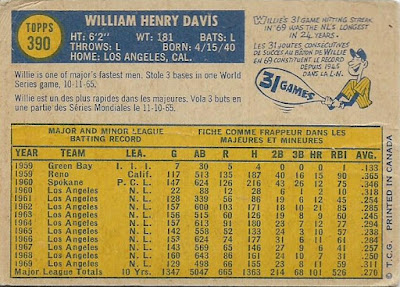 The Davis card is O-Pee-Chee. 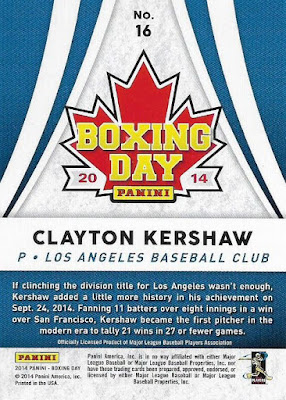 And the Kershaw card is some sort of Panini Boxing Day exclusive? I didn't know Panini made a special card for the most unpleasant day for American retail employees. 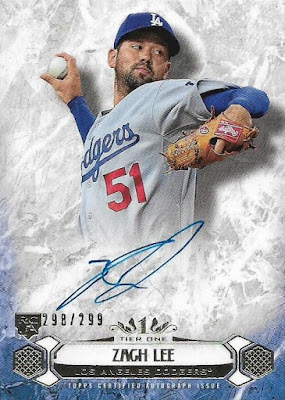 This care package also included some autographed Dodgers, including 2016's Dodger rookie poster boy, Zach Lee, better known as the player who brought Chris Taylor to the Dodgers. These days, Zach Lee is pitching for the Mets' Triple A team in Syracuse, which means I could catch a start by him in a matter of days if I wanted. 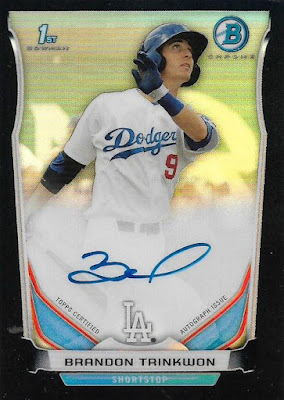 Here's my first autograph card of former Dodgers prospect Brandon Trinkwon, who I believe hasn't played in pro ball since the Dodgers traded Zach Lee. Check out that autograph. Brandon fancies himself as someone named "Bel," which is odd because there is no "L" in his name. 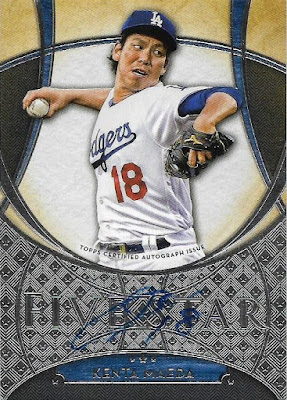 Somehow a Topps Five Star card has made it into my collection. Cool! Here is my first Kenta Maeda autographed card. The autograph is easier to see in person. The scan muddies it up. 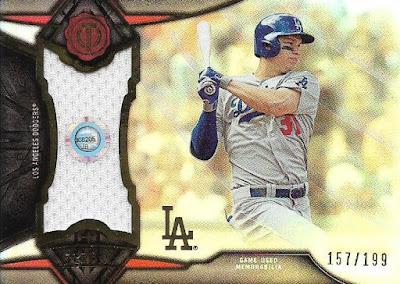 Lastly, more fanciness from 2016 Topps Tribute. This card tells me I have a "certified stamp of approval relic card." But why believe the back when Doug sent the actual certification:

I don't know what the point of the hologram is (sorry, I'm a base collector enamored by Score's designs), but I do appreciate Topps citing when the jersey was used.

The Dodgers beat the Braves during that game (three home runs in the eighth inning) and Joc Pederson had a team-high three hits, including a double.

Thanks everyone for your prayers and wishes. It's going to take me a little bit to fully get into my usual swing, probably into the middle of next week I think. But I'll get there.

Johnnys Trading Spot said…
bah humbug (RE: the Braves losing to them thar Dodgers). Some good stuff there Greg. What really stinks is that everyone of those Dodgers fit into my collection somewhere.
June 18, 2019 at 9:41 PM

BaseSetCalling said…
I have never thought about this until just now seeing those 2019 Score cards: does using italics give a sports trading card a little more visual oomph? i.e., as the text gets up and slants off to the right, does the viewer pick up on that and assign that motion to the pictured subject? I would say that seems to be happening, to me, with those brand new Score cards.

Fuji said…
The 2019 Score design is awesome! But that shouldn't be too surprising since the 1989 Score design is one of the greatest looking football sets from the 80's. As for those Topps holograms... I always liked them, because you got a chance to see which game the swatch was used in.
June 19, 2019 at 11:24 PM

Henry Blanchette said…
I like both the Willie Davis O-Pee-Chee and the Kenta Maeda autograph. Topps Five Star has some beautiful cards.
June 20, 2019 at 3:48 PM