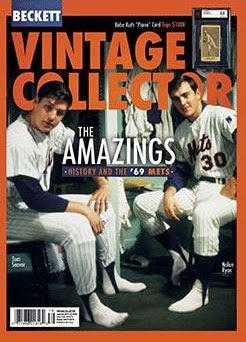 First off, thank you for all of the comments of support and especially the emails regarding my mom's passing.

I'm getting through, as I seem to have inherited my mom's reputation as one of the "rocks" of the family. But it's very difficult seeing how other people handle her loss and the various conflicts and issues that arise from that. Tomorrow will be exceedingly draining.

Anyway, as all of that happens, life still goes on. I've been told that the latest issue of Beckett Vintage Collector is out, the June/July issue, and that I have an article in it. I don't know this first-hand because I have to drive an hour to find a store that carries this magazine and being otherwise occupied, I can't do that. Perhaps this weekend I can find one. I'll write a separate post once I get my hands on a copy (or four).

But further proof that my second article has been published came in the form of a payment check from Beckett. I've decided that I will split these magazine checks so that at least half goes to savings and other needs and the other part goes to card purchases.

The check has been cashed and the cards are arriving. My COMC purchase is on its way, meanwhile I have the items that came off of ebay.

I mentioned that I bought one of these a few posts ago: 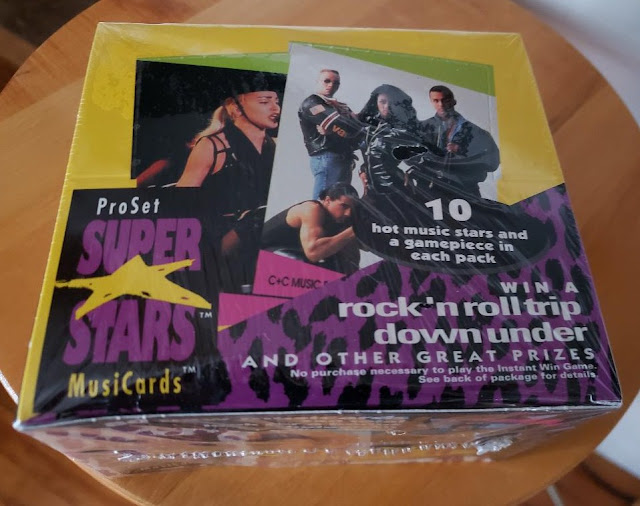 This is the latest in my continuing quest to complete all the 1991 Pro Set MusiCards sets. It's a 36-pack box of Series 2, which I believe was issued in 1992. 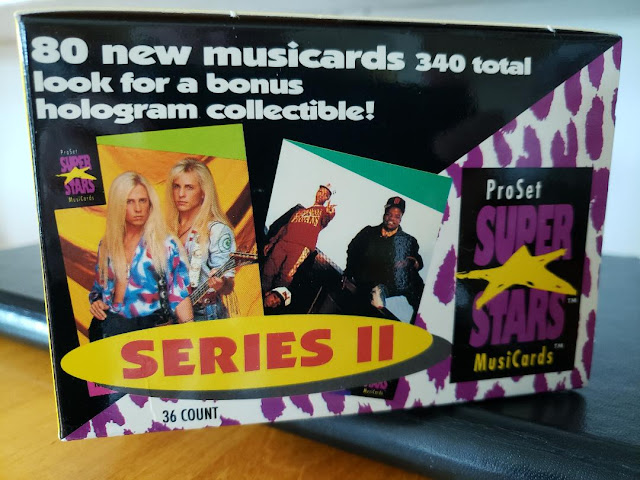 There you go, that's one of the sides, advertising Series 2 and some bonus hologram collectible that I didn't pull.

I've gone through the entire box, because I had some brief down time yesterday, and what an odd configuration to this set.

Yes, there are new Series 2 cards in the box (you can note the Series 2 cards because the card number on the back is red instead of black). But they are mixed in with plain, old Series 1 cards. So every pack that I opened featured three or four Series 2 cards and then the rest of the pack would be Series 1 cards, of which I have plenty already.

Also, the collation was not as friendly as the Series 1 box I opened recently. I thought with 36 packs to open that I'd have no trouble finishing off all of my wants, but as it stands I'm down to needing three Series 2 cards to complete it.

It's possible I have the Foreigner card already. Many of the bands/singers featured have more than one card in the set, making it confusing when you're keeping tabs on what you need.

I'll go into a more detailed description of the Series 2 box in a later post. I also want to see how many dupes I have because if anyone is collecting this set, I definitely have plenty of Series 1 extras now, and a small portion of Series 2 dupes.

The more notable of my ebay purchases was baseball in nature and vintage in nature.

It is a card that I've wanted ever since I became furious that it was going for so much a few years ago. It's a high-numbered card from a 1960s set that usually commands triple digits even though it is not rarer than any other high-numbered 1960s card -- in fact, it's not even one of the short-prints in the set. It has become one of those cards that has been hoarded by some collectors for reasons that aren't easy to determine, the only explanation is that it has some sort of "prestige," which seems to me an excuse to hike up the price on the card. And of course the card features a Dodger so it's been irking me for quite awhile.

But finally I have it. 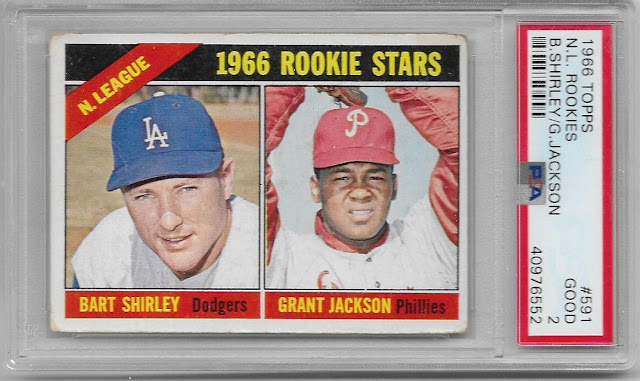 It's No. 591 in the set and if I can just get that high-numbered Ron Perranoski card next, then I will have completed the 1966 Topps Dodgers team set.

This card didn't cost me more than any single card I've ever bought but it came awfully close. It was sure nice to have an extra 100 bucks to play with thanks to the magazine article.

Yup, writing for Vintage Collector is a pretty good gig.

Johnnys Trading Spot said…
Greg, Congrats on the article. Thoughts are still with brother.
May 16, 2019 at 7:38 PM

Nick said…
Congrats on another article! I didn't get to shelve the magazines at work this week but I'm sure one of my coworkers unboxed it. I'll definitely be getting my copy.
May 16, 2019 at 9:11 PM

acrackedbat said…
Looking forward to the new article! What a great gig - being paid to write about baseball cards!! Still keeping you in my thoughts Greg.
May 16, 2019 at 9:13 PM

Fuji said…
This gives me a reason to head over to B&N and browse the magazine section again. Looking forward to buying this magazine and adding it to my "I know that dude" collection.
May 17, 2019 at 12:23 AM

Adam said…
I saw this issue on the shelf at my local Walgreens the other day and it reminded me that I never picked up the issue with your debut article. However, I intend on picking up this issue. So congrats on another writing gig. Also, my thoughts are still with you and your family in regards to the loss of your mother.
May 17, 2019 at 10:31 AM

CaptKirk42 said…
Congrats on the 2nd published article. Nice portfolio material. UGH series 2 Music Cards. Back in the day I spent who knows how much $$ and time completing series 1 (just US version I didn't know about the UK version til many years later) I thought that was complete but I'm not so sure, and I don't think I have many series 2. Been ages since I've checked the binder they are in to see what I have, or box if I transferred them to a card box to use the binder for baseball or football cards. At one time I was moving non-sport cards to boxes from binders to make room for sports cards.
May 17, 2019 at 10:45 AM

Stack22 said…
Nice pick up with that '66 "Bart Shirley." (Never heard of this Jackson character)

Mark Hoyle said…
Congrats on article two. I’ve already read it. First article I just jumped too. Great addition with the Shirley
May 18, 2019 at 7:30 AM

GCA said…
Kudos for the publishing and the GJax '66. Makes me feel a little better about it that you paid closer to $100 than $200 for it. I actually saw (one of?) the guys that have been hoarding them at a National a few years ago. He must have had 50 of them all graded and all ridiculously jacked up in price. A dealer I know well was familiar with the guy and says he's just got too much time and money on his hands, so he picks a random card and destroys the market on it.