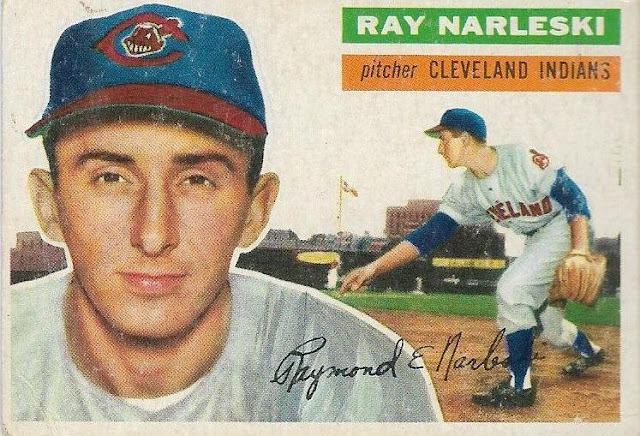 Got another package from eastern Texas recently from Commish Bob. It packed quite a punch because it was another round of 1956 Topps, which apparently can be found raining from the skies there in Houston proper.

Actually, I think he was digging these out of the show that he went to recently. I really like it when I get to benefit from other people's card show attendance.

It looks like there were some pretty good deals at the show, too, because the '56 cards I received contained quite a few name guys.

We'll start slowly with some lesser-knowns: 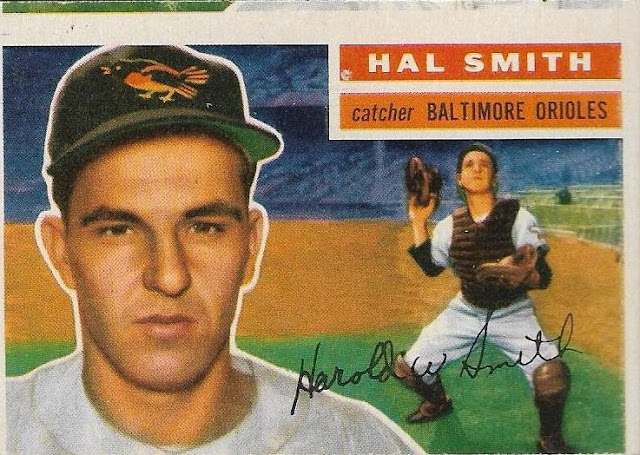 Hal Smith came out of the envelope drastically miscut. I don't think that's a strip of Mickey Mantle's card at the top so Smith will be replaced someday in the set. You ever notice how sharp the corners are on miscut cards? It's like kids didn't want to handle them if they were off-kilter. 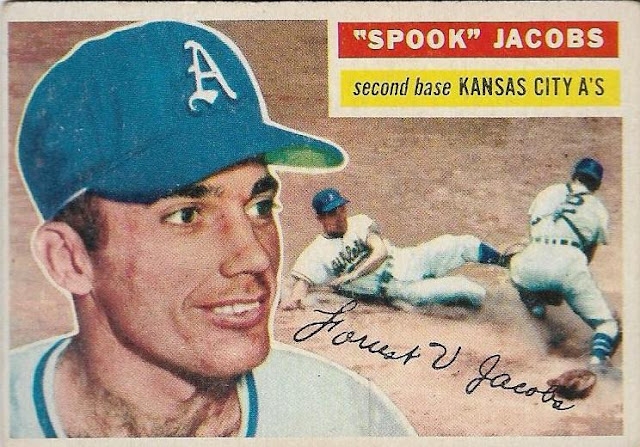 Forrest V. "Spook" Jacobs is known for his nickname and going 4-for-4 in his major league debut. His middle name is notable, too: Vandergrift. 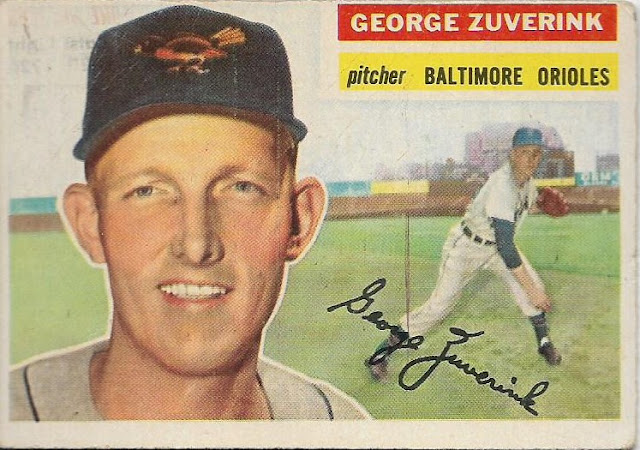 Those early Baltimore Orioles teams had some tough times. I don't recognize any of the O's in the 1956 set. 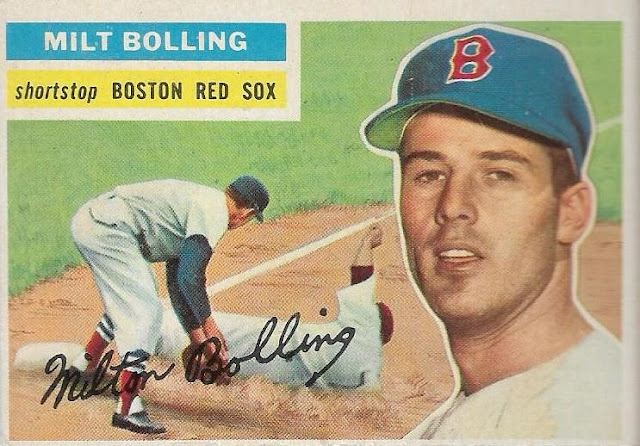 Milt played in just six games in 1955 due to a fractured elbow. He later played on the Tigers with his brother Frank Bolling. 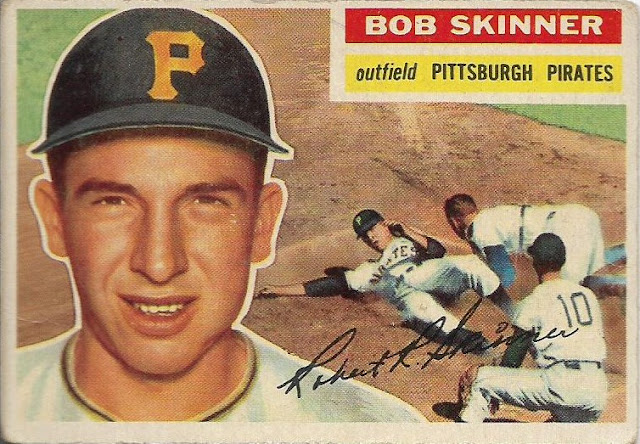 Bob Skinner was just coming up to the majors at this point but he'd develop into a solid-hitting outfielder for the Pirates for a few years and later become known as a manager and then the father of '80s player Joel Skinner and then they appeared together on a Father & Son card. 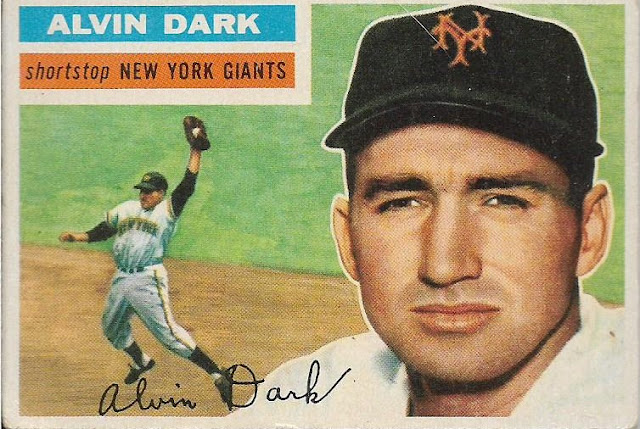 Another talented player who became a major league manager later. Alvin Dark has always been on the dark side (get it?) for playing for the Giants and then managing the A's over the Dodgers in the '74 World Series. I've had the opportunity to pull the trigger on this card a couple of times and then said, "nah, why do I want that guy for?" 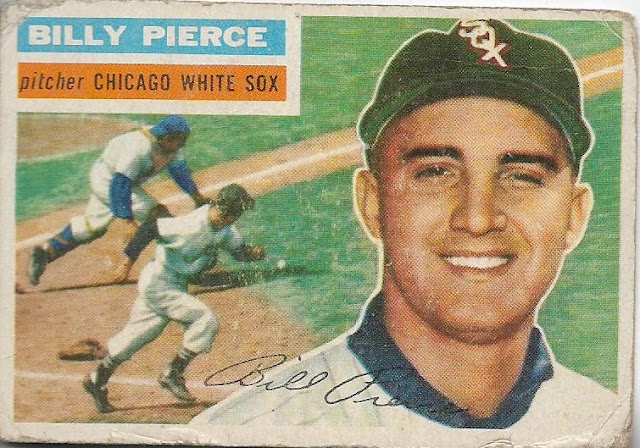 Billy Pierce from the Billy Pierce collector! Bill is a little rough around the edges as Commish noted but it's good enough for me right now. That action image has always been an interesting one. I think Pierce is out by a mile. He may not even have moved the runner. 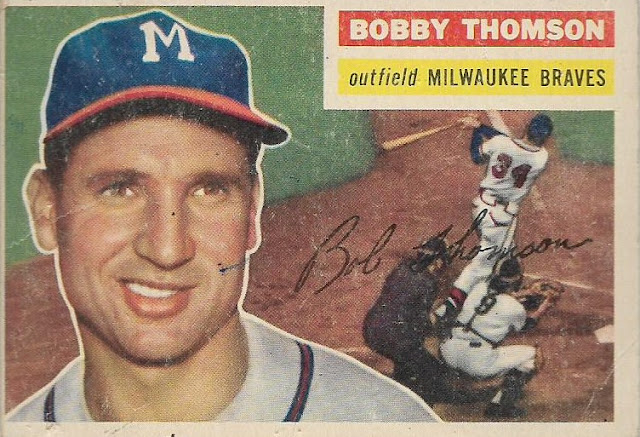 OK, another Dodger enemy. This is several years later after that nefarious deed and I like to think that Thomson was banished to the Braves, but that doesn't work because the Braves were good then. Anyway, cool to get this card. Is he striking out against his old team? 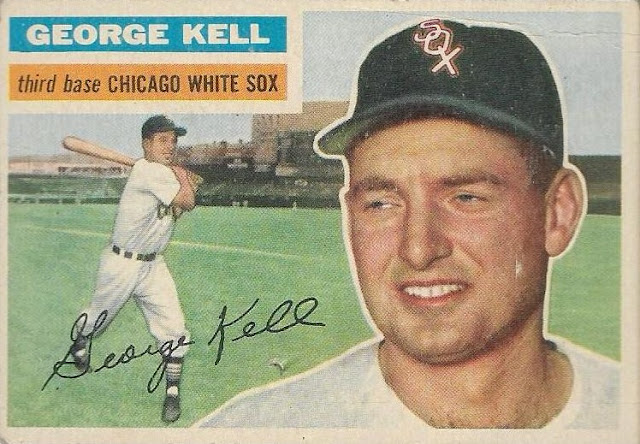 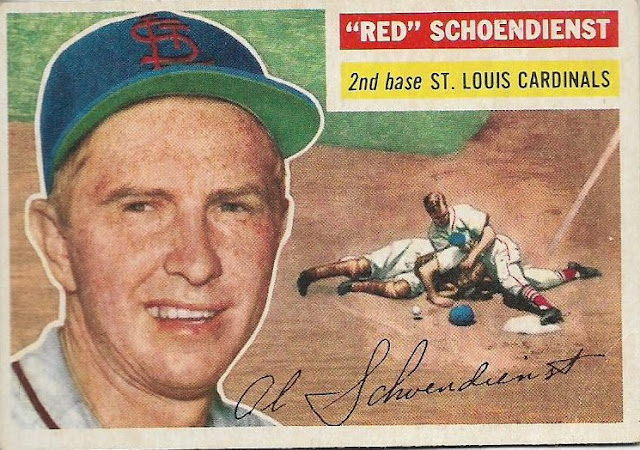 Finally, yet another Hall of Famer and Red appears to be applying a wrestling move on the catcher in order to score.

I've pondered picking this card up at a couple of different shows but then decided I didn't want to spend the cash.

This is the quandary that I am in with the 1956 Topps set. The number of high-priced stars that remain on my want list is so daunting that most times I can't get myself to make even small stabs at the set. The most recent COMC order contained exactly zero '56 Topps cards.

I have to get out of that funk if I'm ever going to complete this set. But, at least in the meantime, I have people digging through boxes to help me fill the set. It is appreciated.

Old Cards said…
Great looking cards. A nice pitching motion on Pierce's card would have made more sense. You 70's and 80's guys have to like these cards as much as y'all like action shots.
May 10, 2019 at 8:54 PM

Mike the History Teacher said…
I think the Pirates were the first team to wear a "modern" style batting helmet in the early 1950s. I wonder if the Skinner card is the first to picture a player wearing a helmet.
May 10, 2019 at 10:04 PM

BaseSetCalling said…
It never ceases to amaze that in just the 5th set Topps ever laid out, they hit the longest Home Run in terms of making exciting action cards in the highest quantities of any set. Since they are forever celebrating the x5th anniversary of every other classic set they have ever made, I really wish they would do a straight 100% copy of this set, in nice warm analog. Not an homage in this ‘style’ or some digital slap together copy-paste-crop job either. It’s time.
May 11, 2019 at 2:57 PM

Henry Blanchette said…
Glad to see that you're continuing to make progress with the 1956 Topps set, especially by picking up cards of Hall of Famers like Schoendienst.
May 11, 2019 at 5:21 PM