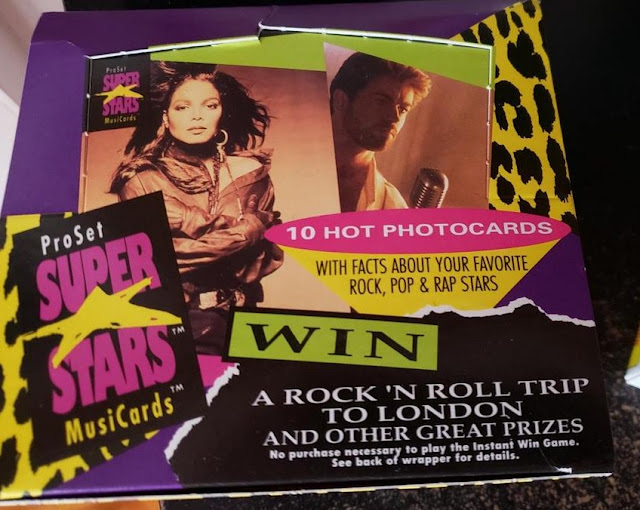 It's mostly a result of my hectic schedule in 2019, but also it isn't helping when Pro Set issued two sets of MusiCards, one here and one across the pond, with some cards the same but some different.

I opened a box of 36 packs of the United Kingdom version of the set last summer and came within one card of finishing it off. I'm still missing card No. 114, Cliff Richard. I haven't really made it a priority to find that card, but I'll get there.

Meanwhile, I decided to try to finish off the U.S. version when I purchased a very cheap box not too long ago. I took it along with me on my latest trip to my parents, because I definitely need some card down time on those visits to recharge my batteries.

Late in the evening I would rip open several of the packs in the quest to find the few cards that I needed. It didn't take me long -- just over half of the box -- to find those cards. 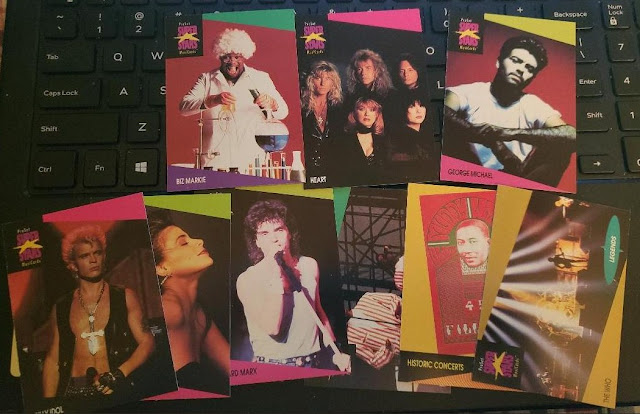 These nine cards finished off the U.S. set for me -- or so I thought.

It actually only finished off Series 1 of the set. There is an entire Series 2 that I didn't really know about ... well, I knew about it, but I thought they were just harder-to-find Series 1 cards. So I've taken care of that by ordering up a Series 2 box.

But, still, there was the matter of discovering a blank spot at card No. 52 after I placed the above cards into their respective sleeves.

Panic set in as it often does in this situation.

Fortunately, I had a whole box of dupes from opening 36 packs. I shuffled rapidly through all the familiar cards -- Belinda Carlisle, the Cromagnons, Tone Loc, Jefferson Airplane -- and started to get near the end before I finally found No. 52. 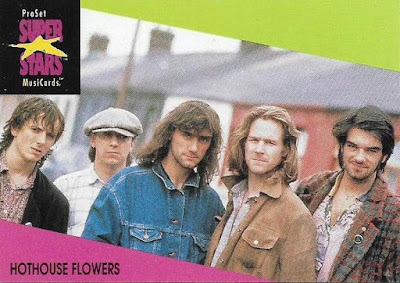 Hot damn, the Hothouse Flowers finally completed Series 1 of the U.S. set for me.

I was only in this position, though, because of an envelope I received recently from Rod of Padrographs. 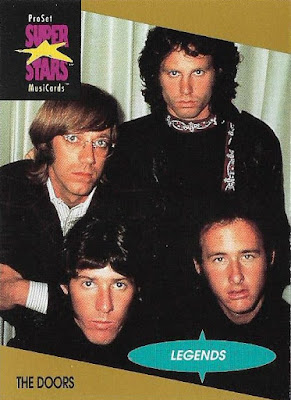 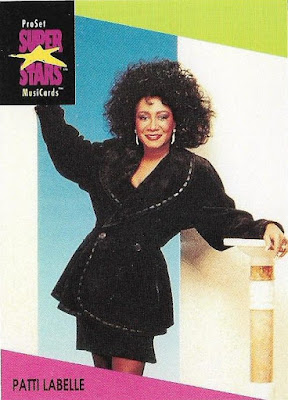 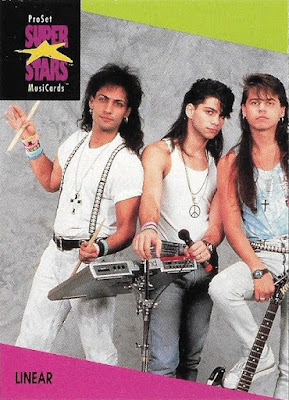 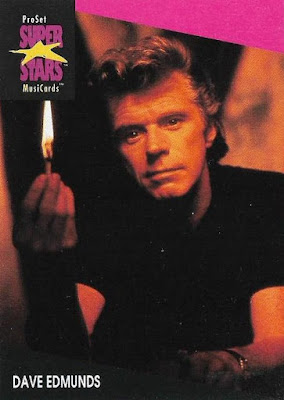 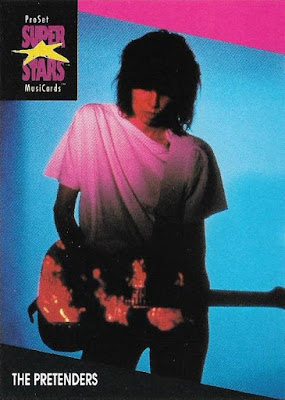 I especially appreciate the last two. (P.S.: that card of Linear is the most '80s thing I have ever seen).

Rod also sent some baseball card needs, too, in case you were starting to worry that I don't collect that anymore. 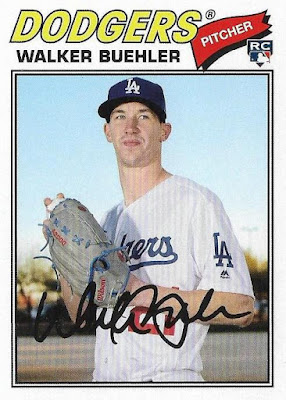 Why not? Let's take a third copy of the Walker Buehler Archives rookie card. I'll take them all! 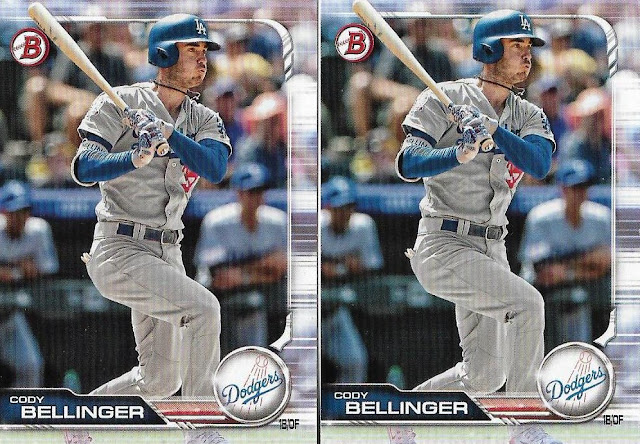 Rod also gave me my first look at 2019 Bowman with this double-shot of Cody Bellinger.

The design is distinct, which is not something I have been able to say about Bowman over recent years. You can see that Topps has continued its "half-border" theme from flagship over to Bowman. 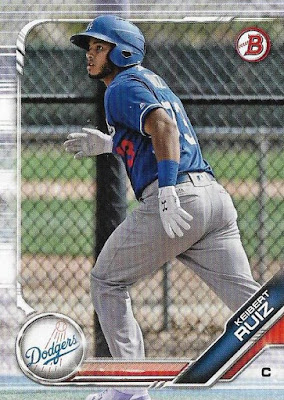 That is one of the prospect cards and for once I'll be able to tell them apart from the veterans at a glance because of that border -- which is on the opposite side for the prospects. 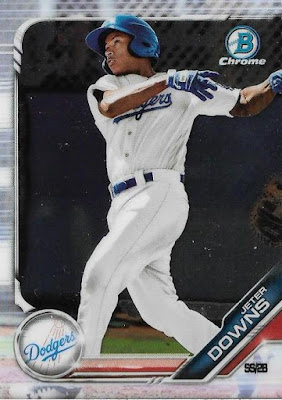 Here is my first jersey card of the Dodgers' broken closer.

Rod also sent a few cards that I didn't know I needed and, truthfully, probably don't. 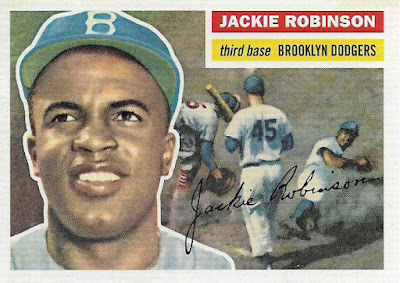 This is yet another Topps ode to the Jackie Robinson '56 card. Topps never tires of issuing these things, pretending as if no one remembers that it's done this already, several times. Maybe Topps is getting senile. 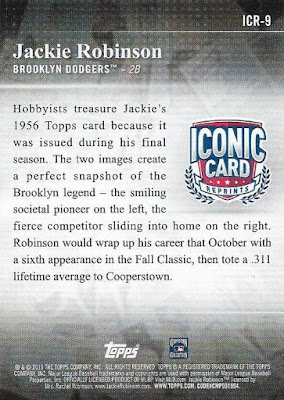 That is the back to prove I'm not just showing you some other '56 Jackie reprint. 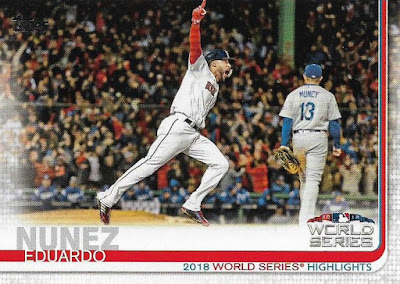 Rod either thought I'd think this was a Dodger card or is being the funny Padres fan and sticking me with this thing. I went until May without owning this ugly bit of history. 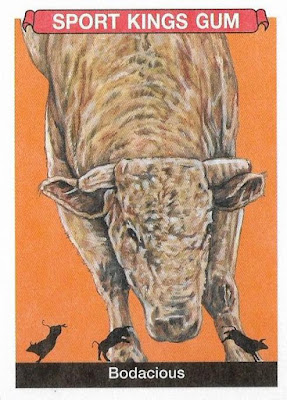 Finally this. I barely know what it is. But it is Bodacious.

Jason T. Carter said…
Someone should do a set blog for the Pro Set Musicards. Maybe after finishing a 1985 Topps blog.

acrackedbat said…
Linear - still sporting their mulletts after all these years. Who knew this was their secret to success?
May 8, 2019 at 8:40 PM

Rod (Padrographs) said…
Greg, don't buy Cliff yet I have a couple of boxes to open. Also Max Muncy is on that World Series Card. And just Bodacious.
May 8, 2019 at 9:04 PM

JediJeff said…
Crappy framing on the Linear card. I had to double and triple take to realize it was not miscut.
May 8, 2019 at 9:05 PM

BaseSetCalling said…
Dodgers so lucky they got yellow for the team name, and not the little pennant icon, on ‘18 Archives ‘77 cards. My team got the yellow, unreadable pennant icon and ruined several shoulda-been-great historical baseball cards.
May 8, 2019 at 9:13 PM

hockey kazi said…
I actually took guitar lessons from his brother Geoff---not quite as good though
May 8, 2019 at 10:40 PM

Billy Kingsley said…
I'm looking forward to seeing your series 2 box break. I don't have any of them and am not too familiar with them other than a quick look at them on the Trading Card Database.
May 9, 2019 at 11:11 AM

Bulldog said…
I love the Musicards and cheated and bought the sets on eBay. Great fun seeing these cards. Great fun.
May 9, 2019 at 2:36 PM