History of my card of the year 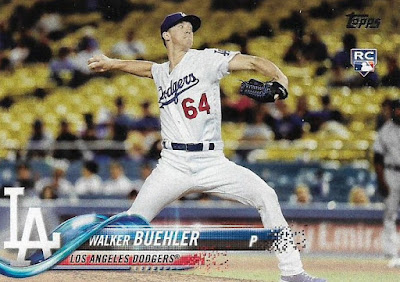 I've gotten my act together. This is my favorite card of the year.

Just under the wire, huh?

I was thinking a little too hard for this exercise. There was both a lot to choose from in 2018 -- in terms of photo quality, really the cards are better than ever -- and not enough to choose from -- I didn't buy a lot of cards in 2018, especially Stadium Club, which always seems to land card of the year. Combined, it all boggled my mind. How do I choose? Am I missing something really great?

But actually I've admired the Walker Buehler card from 2018 Topps flagship the entire year. It's not common that you pull a card of a rookie performer at the beginning of the year, enjoy it at that moment, continue to enjoy it as the player progresses through the season and then pull it out again in the postseason and feel that swell of pride that you own this particular card of a playoff hero on your own team. Plus, the card just looks good.

So that is why it's my favorite card of the year.

I used to name my favorite card of the year each year on this blog with little trouble at all. For the first three or four years, I posted a top 20 countdown of the top cards of the year.

That went by the wayside in 2012. That was the year that Topps issued a flagship set I didn't like and also did some things (recall the online-only Heritage High Numbers release) that caused me to pull away from modern cards and set up the mind-set that I currently have. I'm simply not loopy over modern cards. Certainly not enough to stockpile for the end of a year list.

But let's demonstrate this year by year: 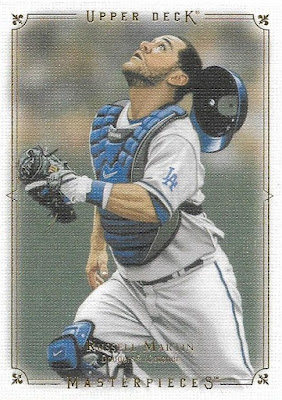 In 2008, the card of the year was the Russell Martin Upper Deck Masterpieces card. Pretty easy choice. The modern card scene was much different then. Lots of variety, lots of selection. 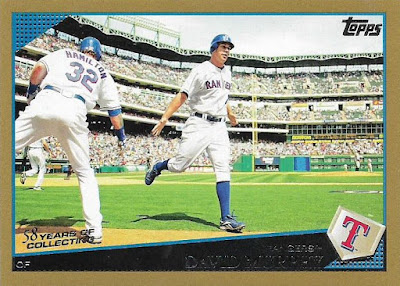 The first year of me counting down a list of the current year's cards on this blog. I also completed the Topps flagship set this year (and bought a bunch of A&G and Heritage and other stuff), so I knew exactly what the best cards were. This fine card of David Murphy was selected as the best card. It's one of the few non-Dodger gold cards that I've kept. 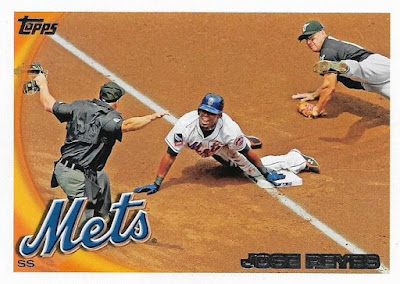 Another year of completing the flagship set, another countdown at the end of the year. Jose Reyes came out on top. Can you tell I love horizontal cards? Do it, Topps. An all-horizontal flagship set. Yeah, some binder people will complain. They can handle one year of sideways viewing for glorious horizontal photos. 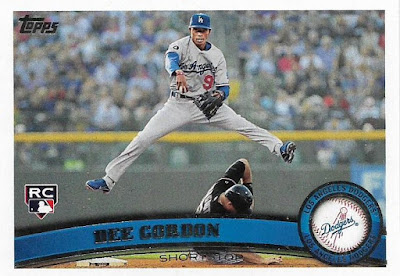 The last year of me counting down my favorite cards of the year. I did not complete the flagship set this year. In fact, my favorite card is from 2011 Update. Yup, I was all about Dee Gordon and not Mike Trout with that set.

In fact, I picked up a few parallels: 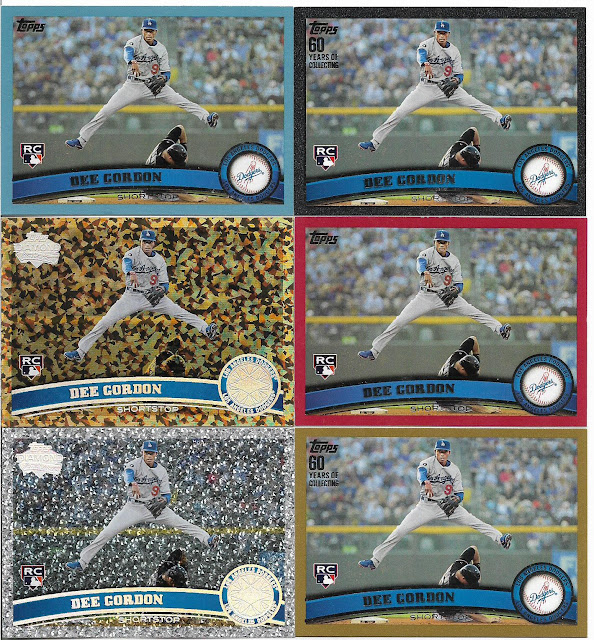 There are a couple I still need that I haven't thought about for a long time, mostly because the inflated cost of Trout is attached to anything related to the 2011 Update set. I'm just happy I was able to get to these before Trout mania struck. 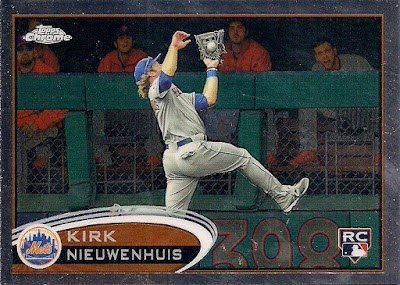 No set completion this year. No countdown. I spent the year pretty annoyed at Topps and didn't bother naming my favorite card from that year until ... May 9, 2014.

I knew all along that it would be the Kirk Nieuwenhuis Chrome card. It just took me awhile to get it. 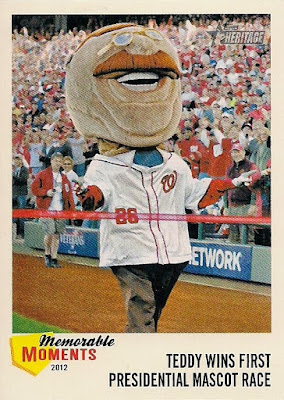 By this point, the favorite cards of the year for me were anything from any year that struck my fancy. Why place yearly limits? This card from 2013 Heritage cracked me up. It still does. I named it my favorite card on Jan. 19, 2014. 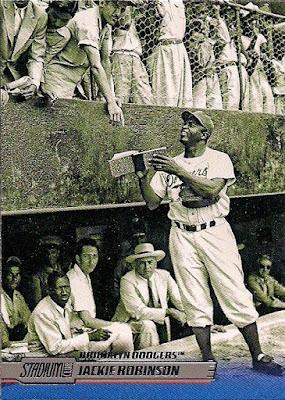 I started selecting my favorite card in the annual "Best/Worst" post that I do each year. Stadium Club also re-emerged in 2014, making the favorite card a no-brainer with this Jackie Robinson-goes-abroad card. 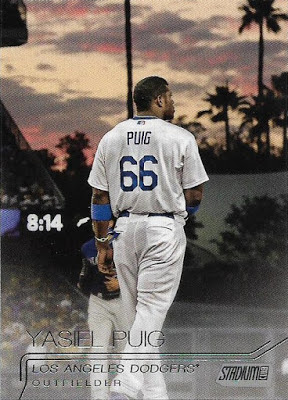 Another no-brainer from Stadium Club. I knew the minute I saw it, it would be the card of the year. 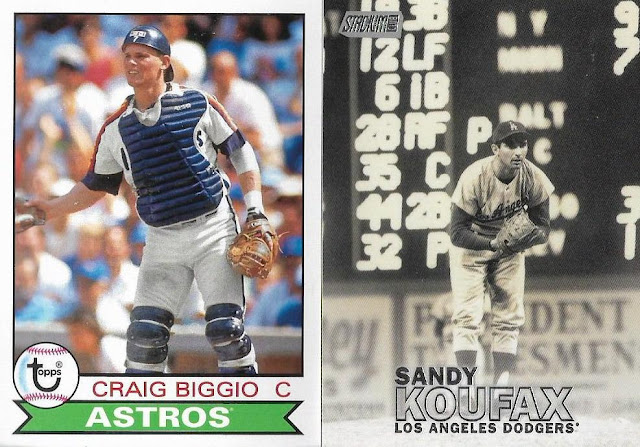 It got a bit confusing in 2016. This is the year that Waiting 'Til Next Year started his contest. And I started confusing "best" and "favorite". When you think about it, there is a difference between "best" and "favorite." But for purposes of selecting a card of the year, it's probably a good idea not to distinguish between the two. Or else, you get TWO cards instead of one. I called the Biggio Archives card my favorite and the Koufax SC card the best. 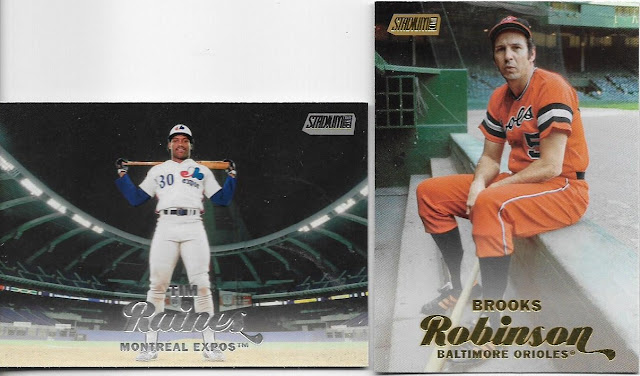 More confusion, although Stadium Club gets double-credit this time. The Tim Raines card was called my favorite and the Brooks Robinson card the best. I probably should have stuck with just Raines, but damn, that Robinson card.

And that brings me to the Walker Buehler card for 2018. I'm back to one card, as it should be.

The Buehler card is the first Dodger rookie card that I've named my card of the year since the Dee Gordon card. But I haven't gone bananas with parallels. 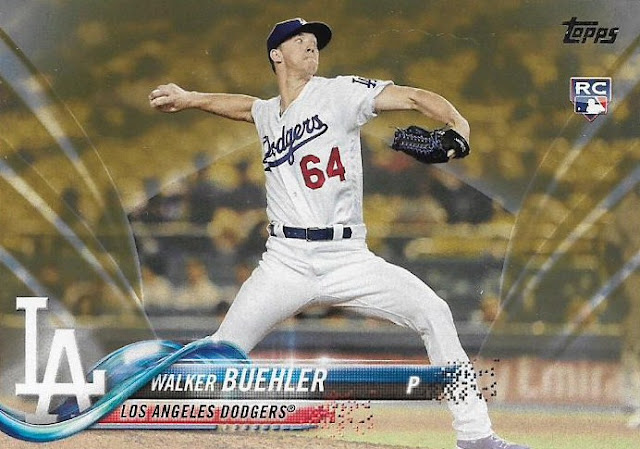 That's the only one I have.

I've stopped going crazy over parallels. I've stopped counting down the top cards of the year.

My favorites are from years that came before 2018. That's how I prefer it.

But a contest is a contest. And who doesn't like a box of new cards at the beginning of a new year?

Nick said…
The Buehler is indeed a beauty. Seems like one of the few Flagship cards I didn't pull from the reams of packs I opened, which is a problem since I just decided to start collecting the guy a few days ago.
January 6, 2019 at 10:20 PM

Fuji said…
Nice choice. I'll go ahead and assume the comment I left last week was the deciding factor in your decision ;)
January 6, 2019 at 10:52 PM

there was also a Look Ma, No Hair card in S1 that showed some detail of the inside of a catcher's helmet - Tyler Flowers; have never seen that before
January 7, 2019 at 10:31 AM

P-town Tom said…
Buehler is one of my favorite young arms in the game. But, my favorite of your favorites is that stellar Dee Gordon card. Thanks for participating!
January 7, 2019 at 7:58 PM