October 15, 2018
(It's the day of Game 3 of the NLCS and I am going to have to find a creative way to watch the game tonight since Fox has deemed it unworthy for basic cable. Or maybe I'll just monitor online. That's sometimes less agonizing anyway. Time for Cardboard Appreciation. This is the 275th in a series): 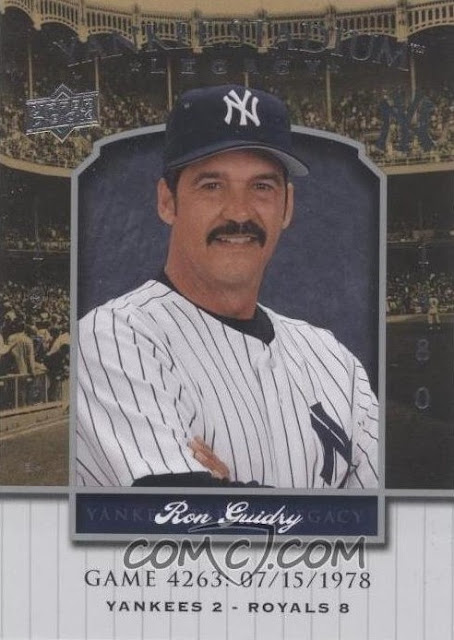 For the first time, I believe, I am showing a card on Cardboard Appreciation that I don't own.

I have had my eyes on this card for quite awhile but it's been out of stock on COMC the whole time I have been aware of it. I haven't bothered searching for the card anywhere else.

That's just the way it is with these Yankee Stadium Legacy cards. If you find one that fits into your collection, you're still not all that enthused about it. Let me explain why:

This card features the first game I ever attended in person. July 15, 1978. This is why I want this card. People collect ToppsNow cards because they represent a game that they attended. This is really the only card of a game that I attended that I want.

However, Upper Deck in its usual half-assed way has thoroughly messed up the presentation. Never mind the headache-inducing practice of putting the winning team on the right, but what the heck is Ron Guidry doing pictured on this card?

Guidry did not pitch in that first game I saw. The Yankees starter was Ed Figueroa. Upper Deck does explain it for you on that back: 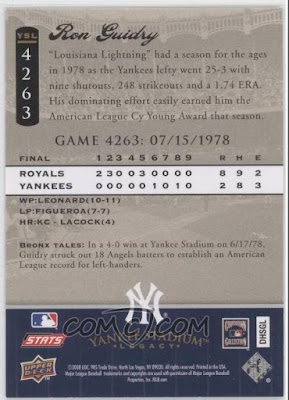 There you see the game details. Figueroa was the loser. Dennis Leonard was the winner. Pete LaCock hit a home run (that's right the first home run I ever saw in person was hit by Pete LaCock). Then there is some gibberish about Guidry, along with a completely different game on June 17, 1978. Isn't there a YSL card for that game? Why is it on this card?

Anyway, this is the only known card of the first game I attended. In actuality, I could produce a better card of that game than this. I have saved the boxscore, I know all the game details, I know that Thurman Munson started in right field. I probably should save myself the trouble of searching for this card and make one myself.

I'm not in the habit of making custom cards, but I'll make an exception here.

Don said…
That would be a neat card to own. My wife recently bought a game program from the first game I ever attended, 8/6/78. Well, it is unscored but from the same series. I will present it is from that game.
October 15, 2018 at 8:20 PM

Commishbob said…
Soooo..this set has a card for every Yankee game at YS? 6000+ cards and this is the first one I've ever seen and the first I've heard of the set. Interesting. I bet I can come up with most of the dates of games I attended there. My calendar puts Brett Kavenaugh's one to shame. ,-)

Fuji said…
99% of the time... I sit around talking about how much I miss Upper Deck baseball cards. This card definitely represents the 1%. I've never taken the time to double check any of the 2008 Yankee Stadium Legacy cards I have in my collection, but I'm tempted to see how many of them feature players who didn't even play in that game. Worst part about it... is Upper Deck missed the opportunity to put Pete LaCock on a trading card.
October 16, 2018 at 12:45 AM

AdamE said…
"I am going to have to find a creative way to watch the game tonight since Fox has deemed it unworthy for basic cable. Or maybe I'll just monitor online. That's sometimes less agonizing anyway."

I found that I sometimes would rather listen to games on the radio than watch them. I don't know why that is. (though Eckersly is excellent in the booth and he is doing the NL games) You might not like the radio now; I could understand whoever taking over for Skully being a let down. I may not like the radio once Castiglione is gone.
October 16, 2018 at 3:27 PM

GCA said…
I was gonna say, I should have a couple different Guidry YSL cards...

It's frustrating that they come up with ideas like this, but then the "do it now" beats up on the "do it well" mentality and you get things like this. If they had taken the time to do each game with the right people pictured (which would take eight times as long, I understand) then it would have been better. Same with YSL and Documentary. Great idea, cheesy half-baked execution.
October 17, 2018 at 1:03 PM