When I returned to Target, I noticed one blaster had been purchased, a couple of rack packs were gone, and the gravity feeder of loose packs was kind of manhandled. The hanger boxes were untouched.

But before I get to the blaster innards, I'm going back to yesterday's post and something that Big Tone pointed out: 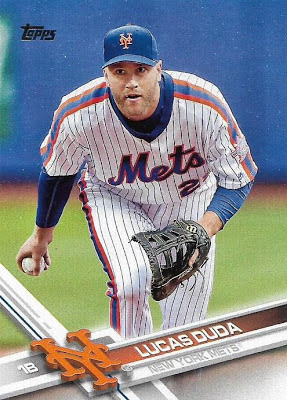 This is not a photo of Lucas Duda. It is a photo of former Met Eric Campbell. 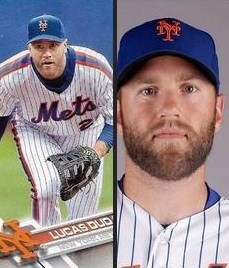 That is Eric Campbell in both photos. Notice the similarities. Somebody goof.

But enough about that, you want to be beaten over the head by the newest cards of the season again!

The blasters this year have a Jackie Robinson Day theme. You get five cards of players supposedly wearing Jackie Robinson No. 42 jerseys (more on that later), plus a commemorative logo patch card celebrating the No. 42.

Although these blasters have an overall Dodger theme, there really is nothing definitely Dodger about them (unless it's a Dodger in the photo). So, no, I won't be hoarding these blasters.

I actually found the contents of this blaster rather ho-hum and filled with doubles (the card season is only 2 DAYS OLD). So I'm just going to show what I found most interesting in the 10 packs in the box. 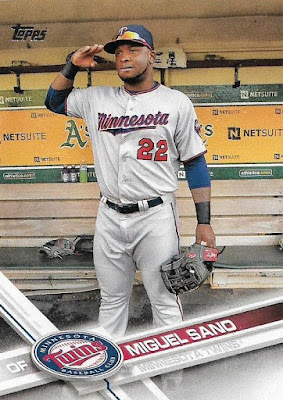 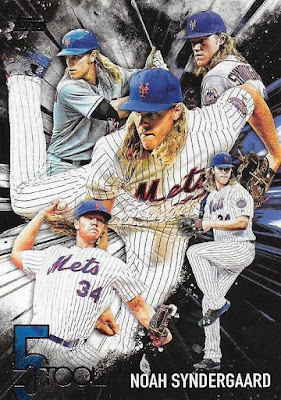 These 5-Tool inserts remind me of the "Fire" inserts from last year's Update set, although -- thankfully -- nobody's hands or other body parts appear to be disintegrating like with the Fire cards. 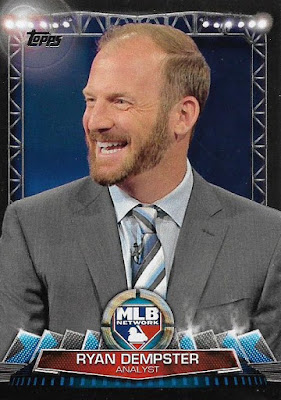 There is an MLB Network insert set this year. The cards are semi-difficult pulls (1:24) and really boring as hell (lots of dudes posing in ties). I wanted the Sean Casey card, but this is a better pull than some others that are available. 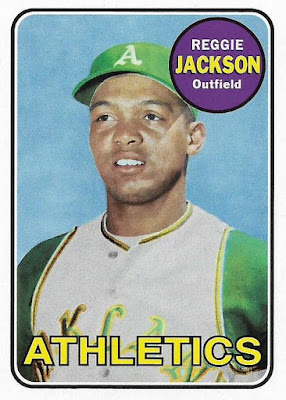 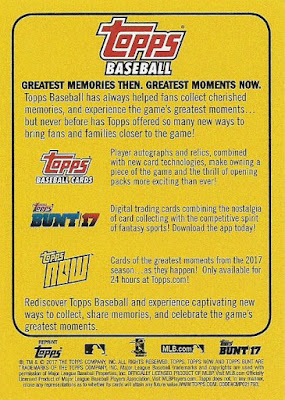 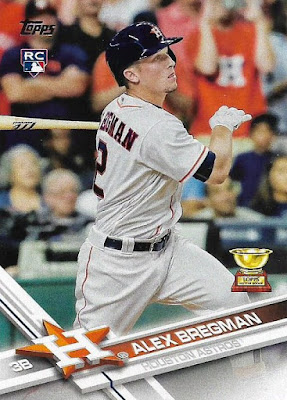 Oooh. It's the rookie we're supposed to flip out over so in five years some poor sap is trying to land Bregman's base card and it's 25 dollars. (Should have been a set-collector dude). 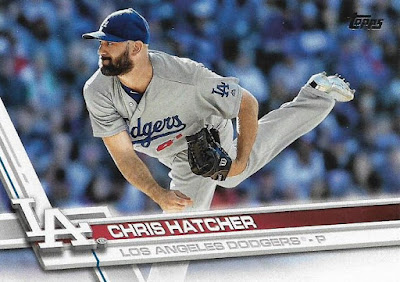 The only Dodger that I pulled that wasn't a dupe is a guy I wished would never appear in a game. Yup, it was that kind of a blaster. 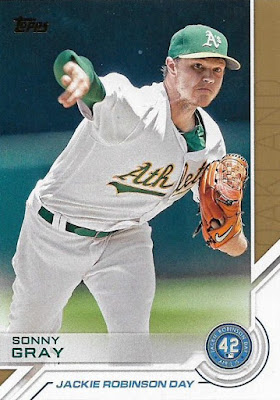 Here is one of the Jackie Robinson Day inserts that look a lot like the Father's Day and Mother's Day inserts (and another insert I'll get to soon). The thing about a lot of these is that you just have to assume the player is wearing the No. 42 because you can't see the uniform number in the picture. This photo could be from August 23rd. 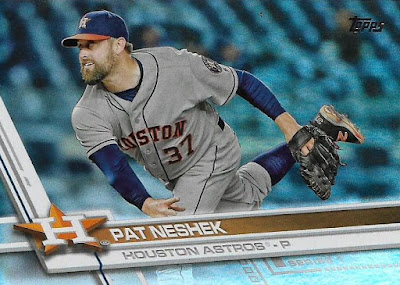 Shiny Neshek is the most exciting thing out of Pack 4. 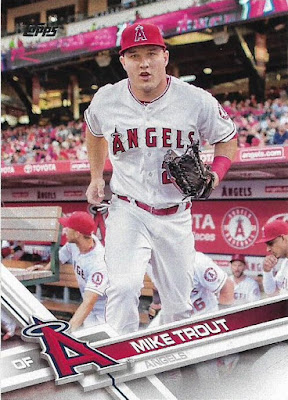 The golden boy. Staring deep into your soul. 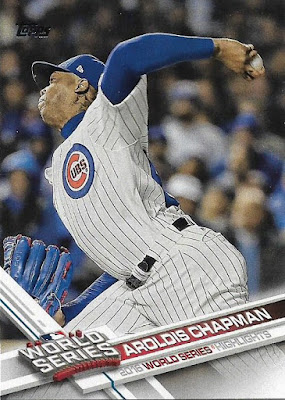 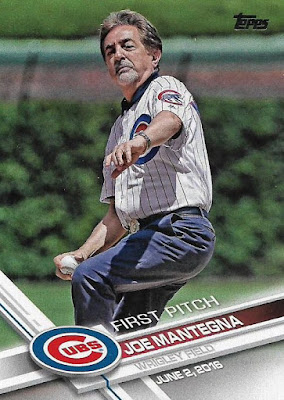 My first First Pitch card is one of those actors who is always hanging around the Cubs. Mantegna appears in a lot of crime shows/movies, which I rarely watch. 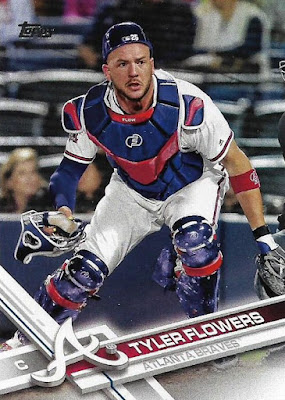 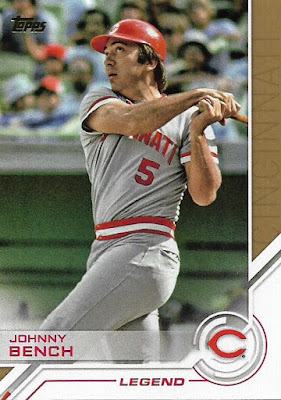 I do not know what this is. I don't see "Legend" card listed on the odds on the back and there isn't enough time to go looking online. There could be a Legends insert set, it could be some super short-print. You know what I say, err on the side of it being worth one MILLION dollars. 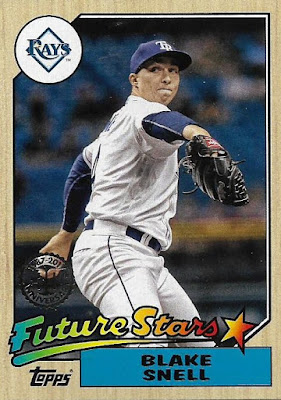 There were exactly 2 cards that I didn't have in Pack 8. Both inserts. The other insert was a really boring one of the really boring Buster Posey. You're seeing Blake Snell, Future Star. 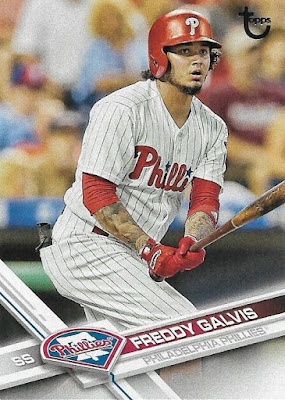 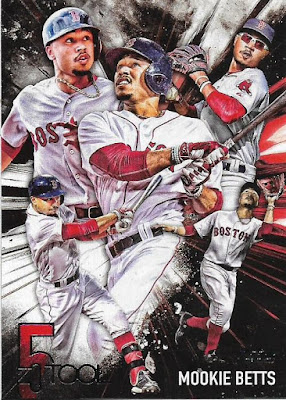 Mookie Betts is all over this set. And so is Mike Trout! Who doesn't want an ad featuring a five-year-old card of his? 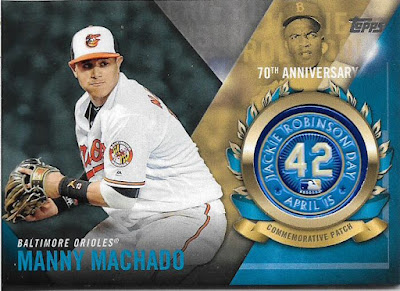 That was my logo patch card. It's not a logo patch though. It's plastic-y type thing.

That was my blaster.

This ends my plunge into 2017 Topps. I'll probably spend tomorrow counting up my dupes, and deciding what cards will go to what people. After that I'll only buy a pack here and there when there's nothing else interesting to buy.

The first days of the new cards are always fun. But they only last all year if the set is worth completing.

Hackenbush said…
I have what for me is a big player collection of (who else cares) Ryan Dempster. That may be his best card.
February 2, 2017 at 8:53 PM

Need More Cardboard said…
Tyler Flowers, a 30 year old backup catcher who played in 83 games last year is in Series 1? Seriously? Also, that's a shame that the manu-relic is made of plastic. They've always been rather boring but at least they used to either be metal or an actual cloth patch. Topps is getting cheap.
February 3, 2017 at 12:13 AM

Brian said…
If you are open to trading it, the Bregman is a want list item for my Rookie Cup collection... Just saying.
February 3, 2017 at 7:26 AM

Brett Alan said…
Inserts of MLB Network hosts? Reprints with ads on the back? A 5 Tool insert that seems to have no idea what the phrase means? (I mean, I love Thor, and he's very athletic for a pitcher, but no pitcher is a 5 tool player.) Not exciting me here, Topps.
February 3, 2017 at 7:48 AM

Fuji said…
That Tyler Flowers card is cool. But it would have been 3x cooler had Topps included his entire catcher's mitt. Close... but no cigar.
February 3, 2017 at 9:26 AM

GCA said…
When I got to my local Target's card aisle, there was already a young man there who had emptied the gravity feed of every single loose pack and piled them in front of him. I couldn't tell if he was done or just starting the molestation, but he put them all back in, looked at a couple other things, and left.
February 3, 2017 at 12:20 PM

Justin Drummond said…
The Mother's Day, Father's Day and Legend cards are all part of the same Topps Salute insert set (I believe there is a Rookie component to that set too).
February 3, 2017 at 6:19 PM

carlsonjok said…
Here is the thing. Jackie Robinson Day is on April 15. Sonny Gray has ever not pitched on that day during his MLB career.
February 5, 2017 at 9:19 AM

carlsonjok said…
Holy moly. Is that bad grammar or what? Sonny Gray has never pitched on April 15 during his MLB career.
February 5, 2017 at 9:20 AM

Cards That Never Were said…
I think you are selling Joe Montegna short. He actually has quite a long history with the Cubs. Although he is nationally known for his crime dramas, in 1977 he helped write and played in "Bleacher Bums". A local theater production that really captured the crowd at Wrigley in the '70s. I included a link to the local public TV broadcast of it from the early '80s. Worth watching for any baseball fan, Cubs or not, with a little time to kill.