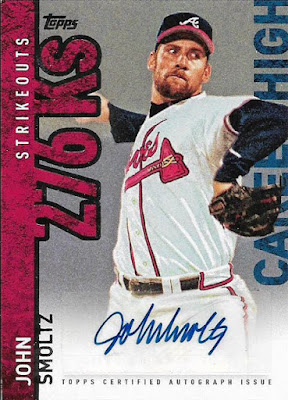 Remember this card? I pulled it out of a repack box that I bought with a gift card just after the first of the year.

As nice as it is to say, "I have an autographed card of Hall of Famer John Smoltz," uttering that sentence rings a little hollow if you know I'm a Dodger fan. And with all of the Braves fans blogging about baseball cards, I knew this wouldn't stay in my house for long.

The card is still in my house. But that's only because I'm determining right now if I want to trudge through the newly fallen snow to the post office before I go to to work. It's in a mailer ready to go, destined for John at Johnny's Trading Spot.

John wanted this card quite a bit and we negotiated for awhile until he struck upon some possibilities obtained at a card show, or wherever he turns up his marvelous finds (I get the impression that everywhere in the south are street-side stands that sell sportscards). He turned up some finds that I was interested in and even featured them on his blog just for little ol' me.

I'll dispense with any more words and show the card that got me to give up Smoltzie. 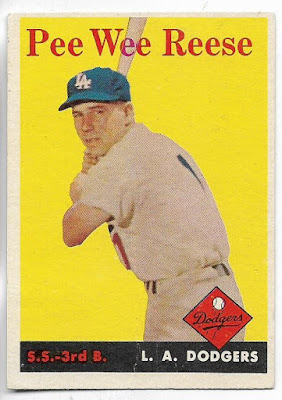 I know you might be numb to this card because it's one of those cards that Topps repeatedly issues in reprint form. But this is the genuine article, a 1958 Topps Pee Wee Reese. It's his final Topps card and I believe the only one issued during his playing career that shows him listed with the L.A. Dodgers.

This was one of three remaining Dodgers I needed from the '58 set. The other two are named Drysdale and Koufax. So it was a no-brainer to claim this card for Smoltz.

I will take a vintage card in a deal almost every time. That doesn't mean more current cards don't interest me. It's just that if you want me to jump at what you're offering, vintage is likely to do it most often.

The Reese card actually has a crease through it from top to bottom, as John informed me before we made the trade. The crease is so faint that not only is it difficult to see in the scan but you have to hold it up to the light and ... oh, there it is! 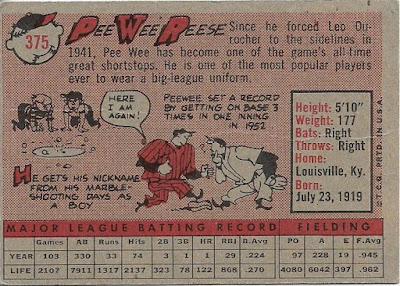 There's the back. You can see the crease a little bit more on the reverse side. But I'm too busy staring at the cartoon of the boys playing marbles.

Still, I figured another card in the deal would smooth over the crease just fine. 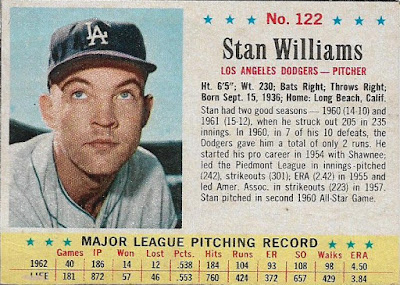 It's a 1963 Post card of Dodgers '62 playoff goat Stan Williams. Post minded its manners and didn't mention Williams' bases-loaded walk to let the Giants into the 1962 World Series, but it's kind of implied in a rather devastating way:

Meanwhile, I just love crossing off Post Dodger needs, there are so many of them. 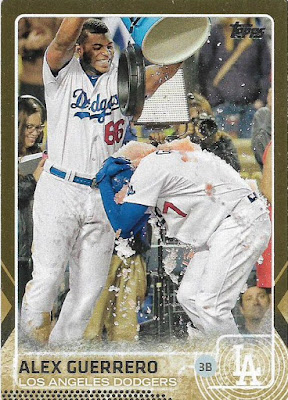 John also threw in this gold parallel from 2015 Update. Still don't know how Guerrero feels about Yasiel Puig getting star billing on his card, but Guerrero's not a Dodger now so it doesn't matter.

I'm finishing this post a few hours later after I started it and I'm pleased to say that I did send the Smoltz autograph out this afternoon.

It's much better that a Braves fan has it.

I can't complain about that at all.

Unknown said…
We don't have street side stands in the South, hell they gives free cards everyday no matter where we go, kidding of course
February 16, 2017 at 8:34 PM

Commishbob said…
I was going to comment on how your Pee Wee looks better than mine but I think that just sound too weird.
February 16, 2017 at 9:03 PM

steelehere said…
That's a horrible choice of photos for that Alex Guerrero card. If Topps put pictures on the back of the card, it would have been a perfect choice but not so much on the front.
February 17, 2017 at 1:05 AM

Johnnys Trading Spot said…
I'm so kind, LOL. Just remember I am the ONLY Braves fan that counts! Just kidding. Seriously, just kidding. Kemp is looking good all slimmed down. You know I had to throw that in, right?
February 17, 2017 at 7:18 PM

Fuji said…
I really enjoy collecting HOF autographs... but I would have went with the Reese too. Beautiful card!
February 18, 2017 at 9:39 AM