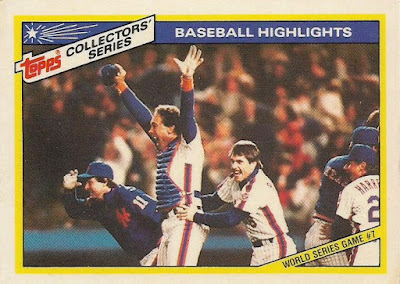 Tonight is the 29th anniversary of the famed Game 6 of the 1986 World Series (yes, I know the card refers to Game 7, trust me, Game 6 is mentioned on the back).

I just happen to be in the middle of determining which World Series feature night cards.

Obviously, not all World Series were played at night, so I can eliminate anything prior to 1972. And for the next five or so years that followed, it's still an easy task. Topps featured World Series cards in its base sets every year in the '70s up until 1979. (You can find my tired rant about what happened afterward). And there's a night card involved each of those years.

After 1978, it gets tricky. The '79 and '80 sets don't recognize the World Series. Any night World Series card I find from the 1978 or 1979 Series will have to come from some retro set that pays homage to a photo from that Series. I'm thinking of the Willie Stargell card in this year's Stadium Club, for example, which I believe is from the '79 World Series.

During the early-to-mid 1980s, Topps relegated its World Series recognition to sticker sets. Now, I have nothing against stickers, but you don't see sticker blogs for a reason. Stickers ain't cards. And the World Series is the grand finale of the baseball season. It needs to be on cards.

Fleer finally recognized this in the second half of the 1980s. It started issuing boxed sets and tin sets focusing on the previous years' World Series. (Topps also got in on the action with the above 1987 Woolworth's-Topps merger that showcased the World Series, as well as other notable players and events from the 1986 season).

By the early '90s, other sets like Stadium Club, Score and Upper Deck took it upon themselves to recognize the World Series.

And then, finally, near the turn of the century, Topps went back to its roots and began featuring the World Series in its base set again (as well as showcasing it in Heritage).

It is my goal to have a night card for every World Series from the 1971 World Series forward. I'll probably put some sort of want list up in the Awesome Night Card section, which desperately needs updating anyway.

Anything else, I'm sure I need.

In a perfect world, I'll be able to show an unbroken streak of World Series night cards reflecting every Series from 1971 to 2015. But again, that may be impossible.

So, yeah, these are the things you do when your team isn't in the World Series. Gotta be part of the excitement somehow.

David said…
I can think of one reason why you won't get a night card for each year between 1971 - 2015, unless you're not counting years in which no series was held.

Zippy Zappy said…
It's a shame that the MLB front office suddenly decided to cancel the 2015 season right before the World Series (not really).
October 25, 2015 at 10:42 PM

Big Tone said…
Do they have to be Topps?I've got the 2001 Fleer Tradition subway series set.There's bound to be a night card In there somewhere.Maybe we can work something out ;)
October 26, 2015 at 1:01 PM

Stack22 said…
Do you prefer day games or night games? While I prefer night due to mostly selfish reasons, having to work during the day and all, I think they should make the team with home field host one day game each World Series as a nod to tradition and perhaps offset home field a bit.

And it be an event, I could justify a day off and taking the kids out of school for one World Series game each year.
October 26, 2015 at 1:33 PM