This is all Al Kaline's fault

One of the unintended aspects of running a card blog is that you become an advertisement for Topps, or whatever card company you are featuring. I don't mind being an advertisement for card collecting -- that is one of the main purposes of this blog -- but as far as promoting Topps' latest product? That wasn't the idea.

But that's what happens and I realize that. Because sometimes I'll see the latest and greatest card product on someone else's blog and guess what? Suddenly it appears mysteriously in my hands.

I had no intention of buying any of the new Heritage High Numbers that is out now. I do appreciate that you can find it in retail instead of those all-in-one-shot boxes of HHN that they've been selling online the last few years. But I had been done with the 2015 Heritage design way back last spring, and seeing players -- half of whom are marginal figures at best -- on that design was not appealing.

Then, while traveling the blogs, I happened upon The Snorting Bull and his "greatest box of retail ever." In that box was a red-inked autographed card of Al Kaline.

I fully realized that the chances of me pulling such an item was beneath remote. And I realized that Snorting Bull had purchased a blaster, and there was no way I was doing that. But the seed had been planted.

So, yesterday, while searching for some cards to go with my box of Stadium Club, I saw the green HHN fat packs and instinctively grabbed one. Because, you know, Al Kaline.

Well, of course, I didn't pull an Al Kaline autograph. Or an autograph of anyone. Or a hit of any kind. Or even one of the 5 or 6 Dodgers in the set. Nope, it was just card after card of "eh."

So, all that's left now is playing a game of "have I heard of this guy before?" -- which is always appropriate with these update sets. 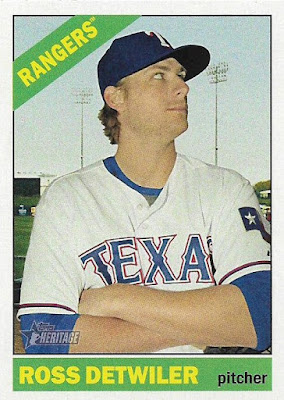 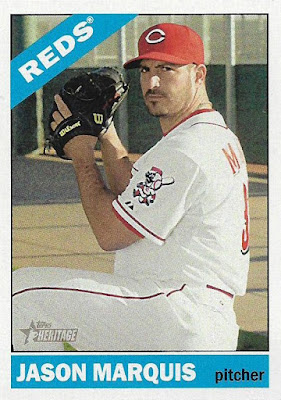 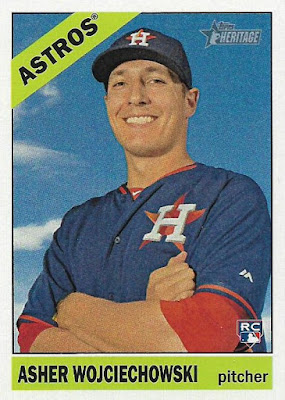 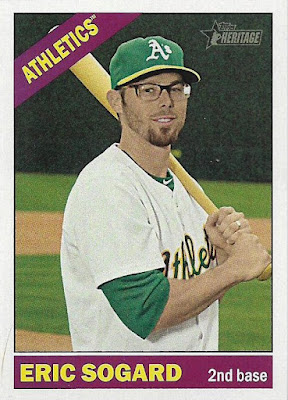 I'm fairly certain that Asher Wojciechowski is a Topps employee. The other three are well-known to me. Sogard, who has been with Oakland for five years now, is one of those unlucky individuals that Topps didn't see fit to put in the base Heritage set. 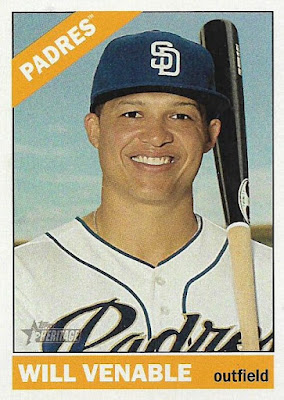 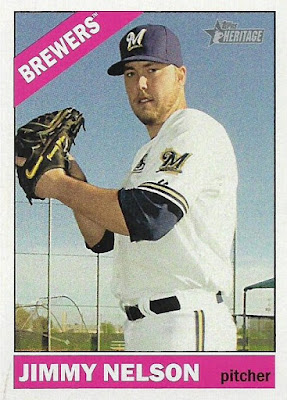 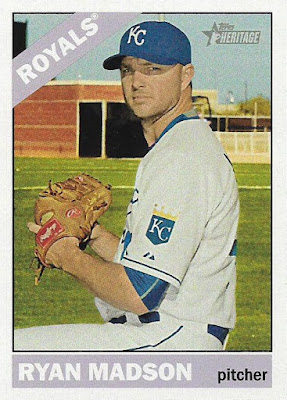 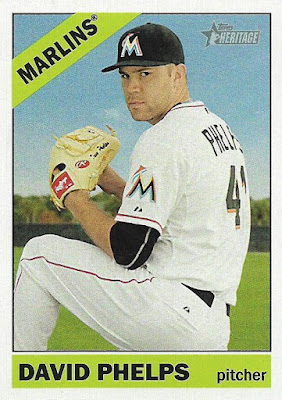 Yes, Yes, Yes and Yes. Hey! I've heard of all four (nice similar pitching poses there). Sure, I know Jimmy Nelson mostly because he sounds like the name of child on a 1960s sitcom, but let's not get into reasons why. 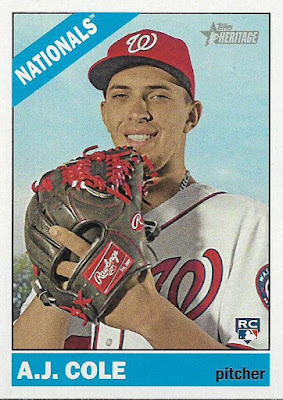 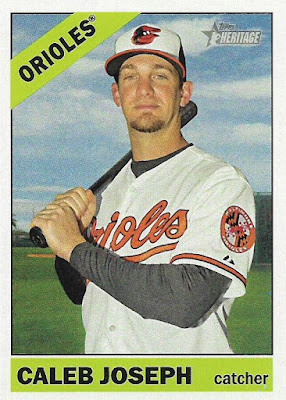 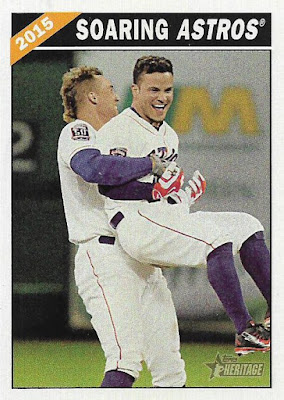 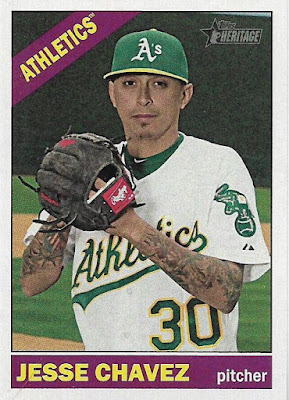 The Soaring Astros card shows George Springer and Jose Altuve. I appreciate that the insert stays true to form with the '66 design, which is to say it does nothing for me. 2016 Heritage/1967 design is just a few months away. 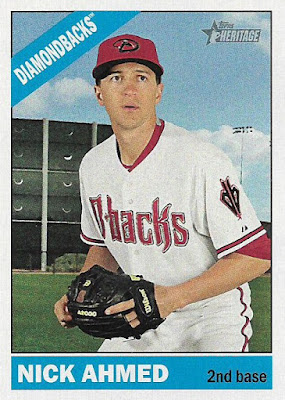 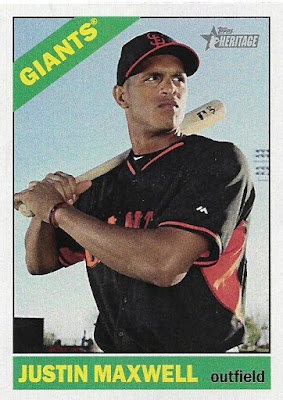 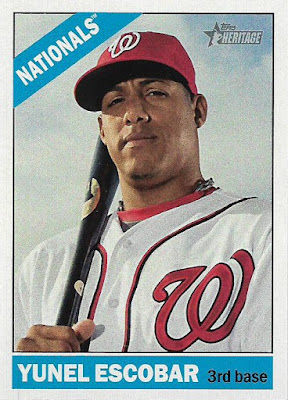 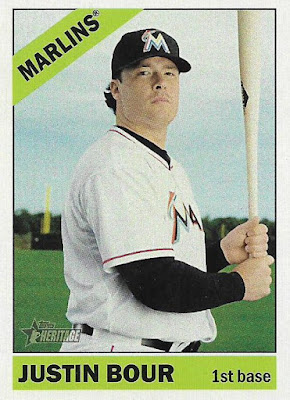 Another perfecto! I know Justin Bour because he seemed to pop up in every Marlins roundup I put in the newspaper. I admit I barely pay attention to the roundups -- other than to hunt for typos -- as I'm usually scrambling to piece them together at the end of the night. But there was that name again and again.

By the way, note all the Marlins, Nationals and Diamondbacks. These cards are stuck with me forever. 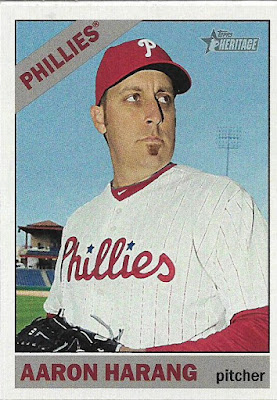 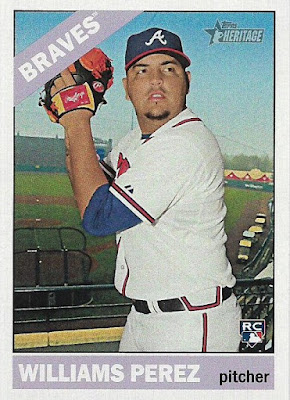 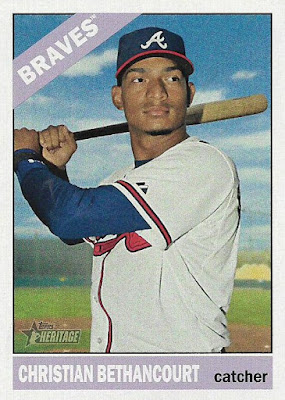 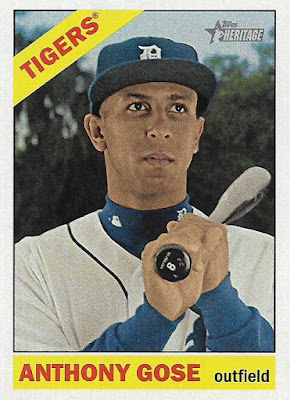 Williams Perez is the odd-man out. Anthony Gose is actually the subject of a future blog post if I ever get to it.

So the final tally is:

That's not too bad for someone with a family, job, mortgage, a few blogs and various other issues. Trust me, if you aren't there yet, you'll get there.

So, other than that little exercise, I think this might be the worst pack of cards I've opened all year.

This is all Al Kaline's fault.

It's all Snorting Bull's fault.

OK, that's not true either.

It's all Topps' fault.

All right, it's all my fault.

SpastikMooss said…
A.J. Cole is a beast of a prospect for the Nationals Not as good as Lucas Giolito, but still oughta be pretty good!
October 10, 2015 at 8:17 PM

Billy Suter said…
Don't let your bad luck here stop you. I pulled a Al Kaline red ink redemption card out of a blaster of 2008 Heritage..Hell, I pulled a Frank Robinson red ink card out of a pack of 2006 Heritage that I got in one of those $20 Walmart repack deals.
October 10, 2015 at 8:30 PM

Zippy Zappy said…
Asher Wojciechowski - A former first round selection by the Toronto Blue Jays back in 2010. The righty is equipped with a low-90's fastball, a slider and a change up. At 26 his time is running short, however the centerpiece of the JA Happ trade (aka the most boringest 10-player trade in history) finally made it to the big leagues in 2015. Whether or not he sticks is another question. Also his last name is pronounced Wo-Jo-How-Ski.

A.J. Cole was drafted by the Nationals back in the 4th round of the 2010 MLB Player Draft. Equipped with a fastball, change up and slider. He projects to be a solid middle of the rotation starter at best. He was traded to the Oakland A's in the Gio Gonzalez deal and the Nationals later traded for him back in the three team trade where they sent Mike Morse to the Mariners. The Nationals rotation could potentially lose Jordan Zimmermann to free agency so Cole could potentially fill the void.

Caleb Joseph is an Oriole. He's had his high moments and low moments as the Orioles catcher, filling in for Matt Wieters. His brother Corban used to be in the Yankees organization and was picked up by the Orioles after Corban was released.

Williams Perez is a Braves pitcher who was signed as an international free agent out of Venezuela in 2009. He's since climbed the ladder upwards. He uses a fastball, change up and slider to induce a lot of ground balls, which reflects how he managed to put up pretty good ground ball rates in the minors. In a rebuilding year where the Braves decided to throw everything against a wall and see what stuck, Perez was one of the pieces flung onto the wall and has a chance to stay.
October 10, 2015 at 8:39 PM

Jim from Downingtown said…
Q. What did I get recently?

madding said…
This set is destined to be repack fodder for years to come, but that doesn't mean I won't stop buying it. I have a problem.
October 11, 2015 at 4:58 AM

The Snorting Bull said…
I am glad I was blamed for causing you to buy cards. I like the Bethancourt. If he would stop clubbing all the time he could be a great catcher. Cannon of an arm.
October 11, 2015 at 8:48 AM