The shoebox is back 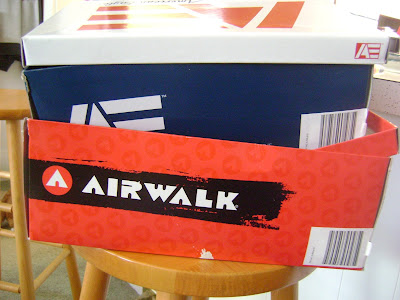 I received footwear for Father's Day.

Don't bother to ask about kind or brand names. I don't care about that stuff anymore. I'm a middle-aged man, far beyond the age of obsessing about what you see when you look down. I'm a forward thinker! Who also spends a lot of time looking backward! But at least I'm doing it in an upward fashion.

In fact, just as important as what was inside the box is the box itself.

As I was opening the package, I realized that these shoeboxes were much needed. I have just two shoeboxes that store cards and that has been the way it's been for quite awhile. Most of my cards are in binders or in those long card boxes.

But dupes are starting to pile up, and I have carved out enough space in a closet to fit in two extra shoeboxes. I can't wait to add some cards to them.

It takes me back to when I was a kid. Before binders and hobby-customized boxes, all of my cards were in shoeboxes. That's just what you did with cards, if you wanted to store them. Cards were in three places:

1. Stacked on shelf or desk or nightside table or front step or in the garage.

2. Spread out over the bedroom floor or basement until mom yelled at me.

3. In shoeboxes, where mom wanted the cards in the first place.

I still remember storing my shoeboxes first in the bedroom closet that freaked me out when I was little (the closet had incredible depth -- at least that's the way I remember it -- and you could walk into it for awhile, way back in there, until it got dark and someone shut the door on you). Then later, the shoeboxes went under my bed because I wanted them as close to me when I slept as possible.

It feels good to put cards in shoeboxes. It feels homey. It may not be the most efficient or careful way, but I like getting back to my roots.

The shoebox is back.

And here's a card for your trouble of me rambling about shoeboxes: 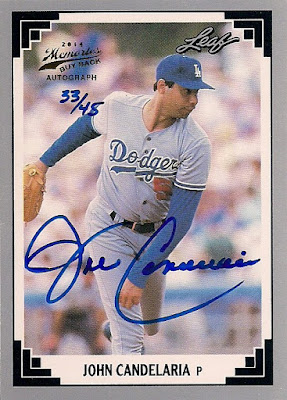 This is an autographed card of the Candy Man from Bob Walk The Plank! Isn't that cool? It looks like John had a little trouble writing the first letter in his name. Maybe too many funny cigarettes.

This card won't be going in a shoebox. There's a careful binder prepped and ready to go.

But right now I'm off to put some cards in a shoebox before anyone yells at me.

shoeboxlegends said…
I wholeheartedly approve this post! Grew up keeping my most prized cards in toploaders in a shoebox, hence my blog name. Also, that is a killer autograph! I love those Leaf buyback cards.
June 26, 2015 at 8:03 PM

Fuji said…
Love Candelaria's facial expression. He's like... what the heck Night Owl... who still uses shoeboxes to store cards? Just kidding. I just sold a huge collection of random sports cards at the flea market and there were at least three shoe boxes filled with cards.
June 27, 2015 at 9:25 AM

Swing And A Pop-up said…
I've screwed up the first letter of my signature too. I even spelled my name wrong once. How embarassing.
June 27, 2015 at 2:31 PM