June 15, 2015
(You ever have a post ready to go and you just don't feel like doing THAT post? This happens to me all the time. I probably shouldn't be admitting to that right here, right now. It's like announcing that the dinner that you've just put in front of someone is leftovers. But, whatever, I like this post, too. It's time for Cardboard Appreciation. This is the 226th in a series): 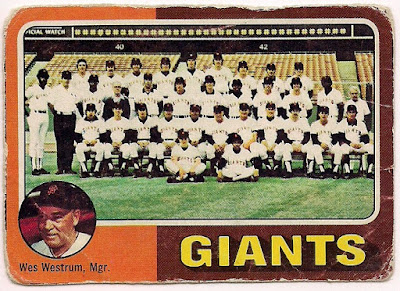 As mentioned in the comments on the previous post, I am quite familiar with the uncut sheet of checklists that were available to collectors in 1975.

That year, my brother and I, purchasing our first cards, cobbled together 40 cents and a Topps wrapper and mailed it off to the Long Island town of Westbury, N.Y., just like the directions said. 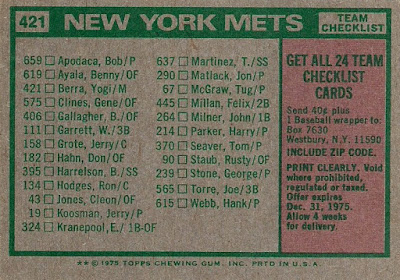 The directions were on the back of any team checklist card you pulled from a pack of 1975 Topps. There in brazen pink, Topps announced GET ALL 24 TEAM CHECKLIST CARDS.

Well that certainly got my attention. I was buying a couple of packs maybe once a month -- as a 9-year-old with an allowance, that's all I could afford. The thought of getting ALL the checklist cards seemed like some luxurious benefit reserved only for kings. And for 40 cents? I knew I would have a terrible time waiting the 4 weeks for delivery.

I still remember the day when the team checklist cards arrived in the mail. It was waiting for us after school. It arrived in a large tube, like something that would contain a poster. My brother and I took it into our shared bedroom and opened it up.

We were disappointed with what we saw ... well, I don't know what my brother thought, but I was disappointed.

The cards were on an uncut sheet, rolled up. And since it had to be rolled up, the cards weren't printed on the cardboard that we knew and loved and had been pulling out of wax packs since the spring. It was printed on some skinny white paper.

The card backs weren't gray, they were white. Weird.

We didn't know what to do with an uncut sheet -- our objective was 2 1/2-by-3 1/2 cardboard. So we carefully cut them up. I don't remember if we distributed the cards between us. I just know that I wasn't crazy about them, and little by little those flimsier, white-backed cards disappeared out of my collection, until I had just one left.

The Giants checklist, of all checklists, is the one left. 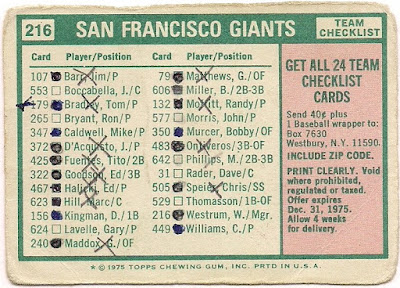 Notice the bright whiteness. Also notice my 9-year-old inventory system. Filled-in boxes mean I owned the card. A line next to the name meant I had the card, but traded it away. A scribbled-out line next to the name meant I got the card back again -- or realized I never traded it away in the first place. The Xs mean that my previous system was stupid and let's figure out how many of these cards I really have.

(By the way, we were highly amused that the checklist cards we ordered still contained the "Get All 24 Team Checklist Cards" ad. We weren't going to try to get them again, silly!)

This was one of my first experiences with getting items through the mail -- and that they may not be what you thought they would be.

I cast a wary eye at future Topps offers.

But Topps continued to trumpet that all the checklist cards were available through the mail the following year. 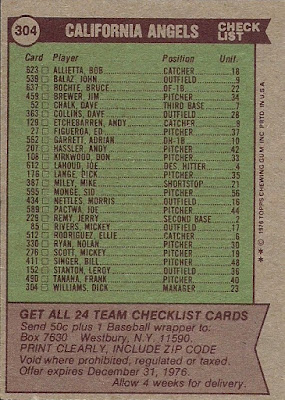 I didn't bite. It wasn't because the price had been raised to 50 cents. It was because I didn't want thinner versions of the real thing that I had to cut out with scissors. I wanted cardboard cards!

So out of principle, I went without having all of the 1976 team checklist cards even though they could be had for 50 cents.

I must have regretted that decision the following year because for the longest time my collection featured a very thin and ghostly white 1977 Topps Pirates team checklist in my collection. It could be only the kind that was part of an uncut sheet of team checklists.

I don't remember ordering the sheet, but I think that I did. I just couldn't bear the thought of all 24 checklists being there for the taking and not grabbing them. 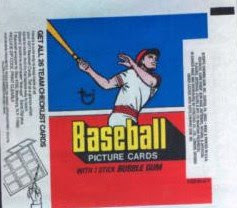 In 1977 the advertisement for the checklist cards was moved off the back of the actual checklists and onto to the wax wrapper. As you can see it was now "26 checklists" for the addition of the Blue Jays and the Mariners.

By the way, 1977 Topps wrappers advertised all kinds of things -- checklist cards, T-shirts with a card on it, and the famous "card locker".

But all I knew was cardboard.

Of course, now, a whole uncut sheet of all 24 1975 Topps checklists would be a thing to behold. But as a 9-year-old kid, I knew what I liked, and it wasn't that size or that thickness.

It's always been about the cardboard.

Anonymous said…
That's really interesting, I did the same offer in 1974 and I got a legitimate cardboard sheet of checklists, folded in half and mailed in a manila envelope. Maybe since my mailing address was a half-hour's drive away from Westbury, NY, the fulfillment people said "Hey, here's a Long Island kid. Let's send him one of the good ones, and use the other ones for the outta state kids who don't know no better".

...And I feel really guilty about not having posted about that sheet already... I'll try to get mine posted soon, and I'll give you the appropriate credit for acting as a catalyst.
June 15, 2015 at 8:27 PM

Swing And A Pop-up said…
My parents weren't exactly encouraging my baseball card habit because they were always all over the floor. (I was always looking at them, why put them away?) So I never got into the mail order stuff, but I would have been disappointed with that purchase too.
June 15, 2015 at 9:43 PM

NPB Card Guy said…
I ordered this as well and was also disappointed with the paper versions of the cards. What was worse for me was that living in the Bay Area at the time, all my 1975 cards were minis but the checklists were full sized. I had all my cards organized by team and each team was wrapped with a rubber band so the team cards ended up wrapped around the rest of the cards. Actually that probably helped protect the other cards from rubber band damage...
September 14, 2015 at 8:20 AM