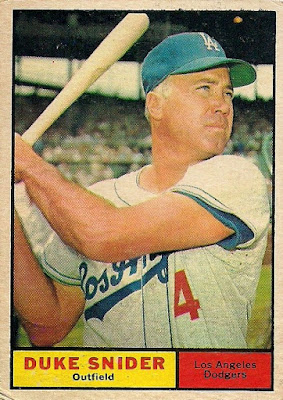 I haven't been doing very well with card packages recently. There just isn't the time there used to be. Two or three years ago I was on a once-a-week schedule for packaging and sending out. But that's become every three weeks or four weeks, or whenever the work gods deem me worthy of free time.

Consequently, packages have been slow to arrive at the home (although I do see three in the mailbox as I write).

I was in this state of card package limbo over the weekend, when I got the mail on Saturday. As a U.S. citizen, you must know by now that nothing but nothing good ever shows up on Saturday.

I shuffled through three flimsy looking envelopes, fully expecting an ad or a bill, and there was one small white envelope, in the shape of a greeting card, that I looked over.

It was from R.C., who has sent me some excellent cards in the past. In fact, on two separate occasions, he has sent the above 1961 Topps Duke Snider card.

But I had to the shake the cobwebs on the who and the what because you know how the brain fogs over when busy days turn into busy months.

I pulled the item out of the PWE. It was a top-loader, wrapped in some orange note paper, which included the following message:

But considering what was obviously one card traveling in a PWE, I didn't expect much more than a forgotten want list item or maybe something a little vintagey.

I forgot this was R.C. I was talking about here. 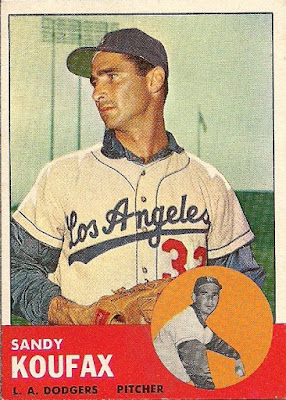 That takes both guts and generosity, my friends.

I don't have to say that made my Saturday.