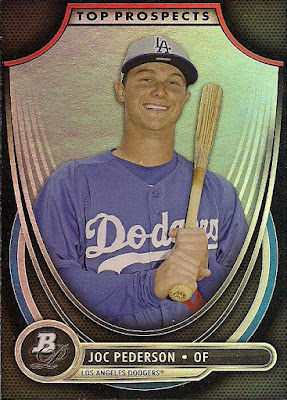 In the calendar world, the number 31 represents the maximum number of days in one month. It is the title of an upcoming slasher movie that I will never watch. And, if you were to hit a home run once a day for an entire month, the most you could hit is 31.

Joc Pederson hasn't done that -- yet -- but he is already more than halfway to 31 for the season just two months into the season with two homers again last night and four in his last four games.

Pederson wears uniform No. 31, and it's about time. Thirty-one was a once-proud numeral in the Dodger world as one of the best players of the mid-1990s wore it. But since that awful time when he was mistakenly traded, the number has never been the same. 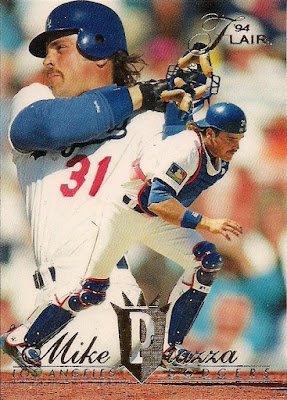 After he was traded to the Marlins, and then the Mets, the Dodgers didn't give the number to anyone else for several years, which seemed appropriate. Then they did give it to someone and what a slippery slope that was.

The No. 31 was worn by several Brooklyn Dodgers, but none most people have heard of -- names like Wilson, Moore, Kampouris, Webber, the Mad-Men-esque Dick Whitman, and Hank Behrman, whose relic card is in my collection.

So the first Los Angeles Dodger to wear the number was utility infielder Don LeJohn in 1965. 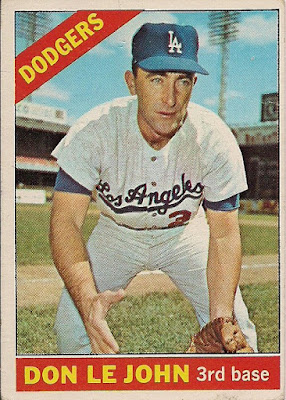 Trust me, there is a "1" somewhere on that jersey. LeJohn wore the number for one year. And so did backup catcher Jim Campanis (1966) and part-time outfielder Ted Savage (1968). 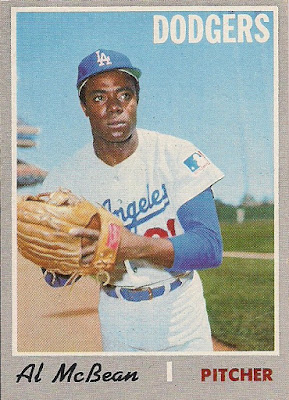 Reliever Al McBean (love that name) stretched the No. 31 over two years (1969-70) before it was picked up for a year by a couple of rookies, Gary Moore (no, not the "Dream Weaver") and knuckleballer Charlie Hough. 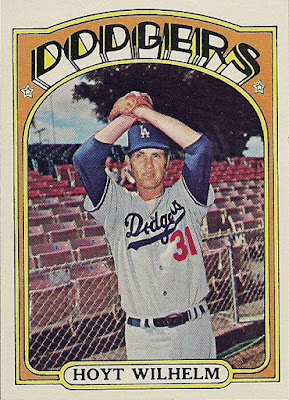 Hoyt Wilhelm kept the number in the bullpen through 1972 for the close of his career, and then the number stayed in one place for eight whole years. 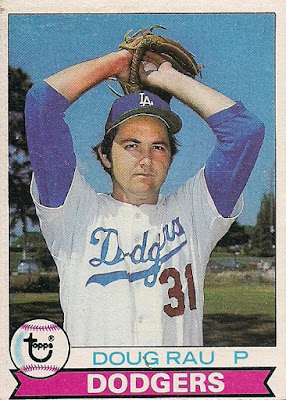 No. 31 during my childhood was starting pitcher Doug Rau. He was the Dodgers' No. 4 starter (behind Don Sutton, Tommy John and Burt Hooton) during the Dodgers' World Series years in the late '70s. He's now known mostly for getting into an argument with manager Tom Lasorda on the mound during the World Series. But at the time I had high hopes for Rau to be one of the Dodgers' greatest pitchers.

Unfortunately, he ran into arm issues. However, he had brought No. 31 to heights it had never seen in a Dodger uniform.

During the 1980s, the No. 31 was worn by a combination of role-playing outfielders, backup catchers and relievers. 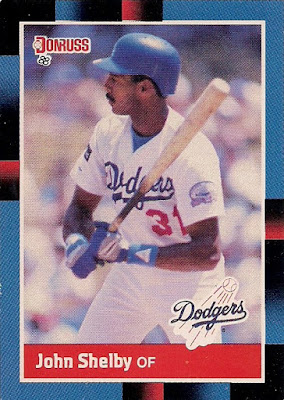 John Shelby took the number to center field, where it remained from 1987-90. Shelby wasn't the greatest hitter, but at least the Dodgers won a World Series with Shelby wearing No. 31. 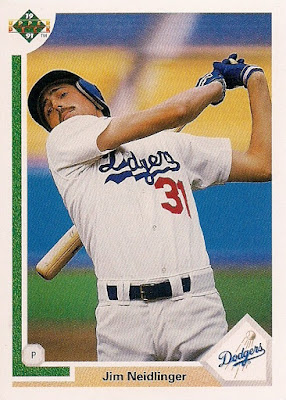 The early '90s kept No. 31 in the bullpen. Jim Poole and Jim Neidlinger and Roger McDowell meant that 31 was hanging out with the zanies. 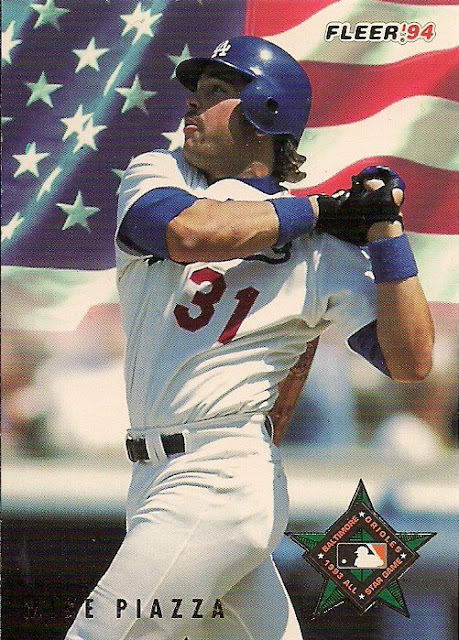 It took Mike Piazza to give 31 new respect at the plate. From that point, No. 31 could mash and bat above .300 and go to the All-Star Game. No. 31 could be Rookie of the Year and go out with starlets and make guest appearances on TV.

The '90s were the best of times for No. 31, until the Dodgers freaked out that they wouldn't be able to re-sign Piazza and traded him for Gary Sheffield and company in the hopes that would get at least something out of Piazza's departure.

When it finally resurfaced, it appeared on the best pitcher the Dodgers had at the time. 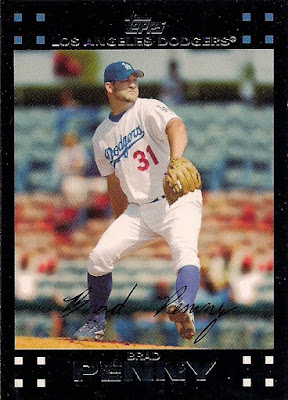 OK, so it wasn't Mike Piazza. But Brad Penny did start an All-Star Game and had a couple of good years for the Dodgers. It's what happened afterward that undid much of the work that Piazza achieved with 31.

First, No. 31 appeared on Dodger pitching hopeful James McDonald. But McDonald was sent to Pittsburgh a couple years later. Then Jay Gibbons, desperate to hang on to the final shreds of his career, wore No. 31 in 2011 after wearing it in the minors. 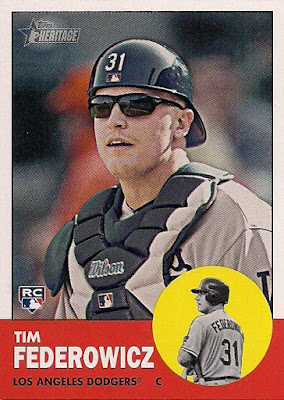 Then the number returned behind the plate, but Tim Federowicz wasn't going to remind anyone of Piazza. He wore it for just one year before No. 31 hit rock bottom. 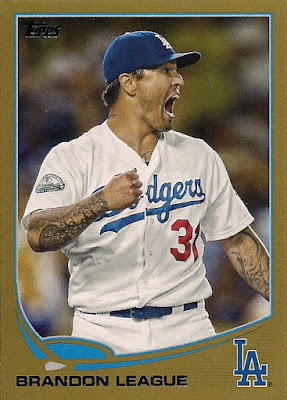 For two miserable years, No. 31 clothed the tattooed chest of fire-starter Brandon League. League's appearances could take down an entire forest and not a single Dodger fan wanted to see No. 31 on a mound.

Last year, No. 31 was on the back of backup catcher Drew Butera, until Joc Pederson said "GIMME THAT!" 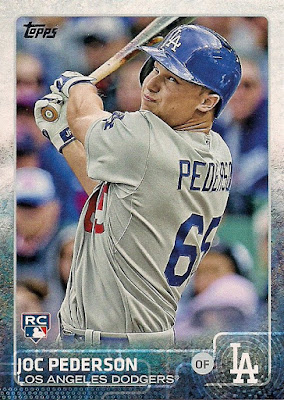 I don't have a card of Pederson wearing No. 31 since all of my Pederson cards feature photos of him from prior to 2015.

But it's only a matter of time. At the rate Pederson is perfoming, I fully expect there to be at least a dozen cards of Pederson in next year's Topps product.

Whether I have a shot at any cards of Pederson wearing No. 31 is another story. I just read a very interesting article that concludes by saying that Mike Trout, Bryce Harper and Joc Pederson are "some of the best hitters of our time."

There goes the affordable Pederson cards.

Zippy Zappy said…
Given how Pederson's potential was always second fiddle to Corey Seager's, I'm getting excited to see what the rest of the Dodgers farmhands on their way up can do.
June 3, 2015 at 8:03 PM

steelehere said…
Ugh, the Piazza trade was wrong in so many ways. The worst of which are the me-first center of the universe New York fans that discovered Piazza after the Marlins trade and think he deserves to go into the Hall of Fame wearing a Mets Cap because he's their best catcher ever (my apologies to the Expos Hall of Fame cap wearing Gary Carter). Nothing in his Mets stats compares to what he did as a Dodger (unless facing Roger Clemens in a World Series his team lost counts).
June 3, 2015 at 9:48 PM

SpastikMooss said…
On my fantasy team, I have Pederson, Kris Bryant, AND Corey Seager on my bench. Needless to say, I'm good.

BobWalkthePlank said…
The Dodgers future is so bright. Now that they got people who understand how to put a team together the sky is the limit. Pederson is a fun guy to watch. That swing is so fast and powerful that he could easily hit 40 homeruns.
June 4, 2015 at 7:57 AM