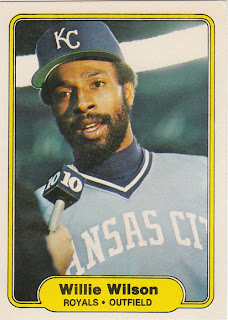 While leafing through my collection of 1982 Fleer to track down some cards for another trade, I couldn't help but notice two of the elements that define this problem child of a set.

The first is blurry photos. It's probably the first thing many collectors think of when '82 Fleer is mentioned -- that, or the cavalcade of errors.

The second thing is off-center photos. There are some beautiful disasters in that department. Hal McRae, Dickie Noles. A whole bunch of shots where apparently the sky is the protagonist in the photo. ("Step aside Mr. Brett, I just spotted the most incredible CLOUDS in my viewfinder!")

But the third notable aspect of 1982 Fleer is something near and dear to my heart: night cards. It's the reason why I have a soft spot for the set while virtually everyone else smirks at it. I didn't really realize until recently how many night shots exist in this set. It's not a lot, but considering the era, it may be the first set with more than a handful of night shots.

(Also another key aspect: a bunch of the card photos are taken in Dodger Stadium).

The card of the Royals' Willie Wilson up top is one of my night card favorites. I enjoy how the photo captures Wilson in mid-postgame comment while the blur of stadium lights blaze in the background. I also like cards that show players being interviewed, even if it is some TV dude doing the interview.

I have a few other '82 Fleer night cards to feature, including another one of my all-time favorites.

I never thought '82 Fleer was such a bad little set. It's not bad at all, really. Maybe it just needs a little love.

madding said…
I think the early '80s Fleer and Donruss sets get a bad rap. I like that they're funky looking, flawed, and cheap. For the most part they were a more affordable alternative to Topps and finally introduced options to a baseball card market that sorely needed it.