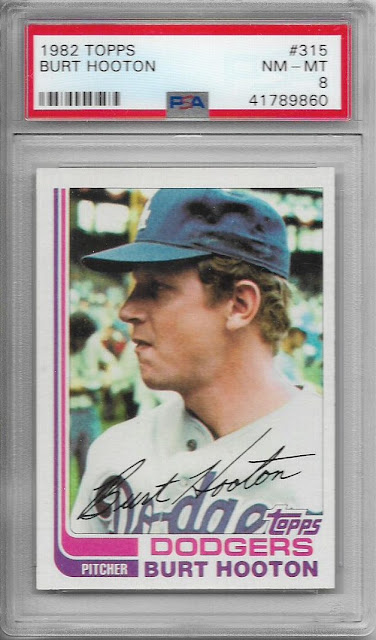 It is interesting to me how card collectors seem to have so much in common, as far as interests, personality tendencies, how their brains are wired, etc., and still can be so different.

But, I'm thinking, somebody grew up in a period when everyone was grading cards and that, yes, even commons should be graded because, you know, they could, uh ... they could, you know ... they could ... just do it, OK??

There is no reason to grade this card.

And, also, there is no reason for me to break this card out of its case. This item was sent to me by Max of the Starting Nine for the sheer novelty of it. As far as non-graded 1982 Topps Burt Hootons, I have plenty. There's one in my Dodgers binder. There's one in my 1982 Topps completed set. There have to be at least five or six in my giant Dodgers dupes box.

But this is my first graded 1982 Topps Burt Hooton.

So, uh, that's something. I guess. 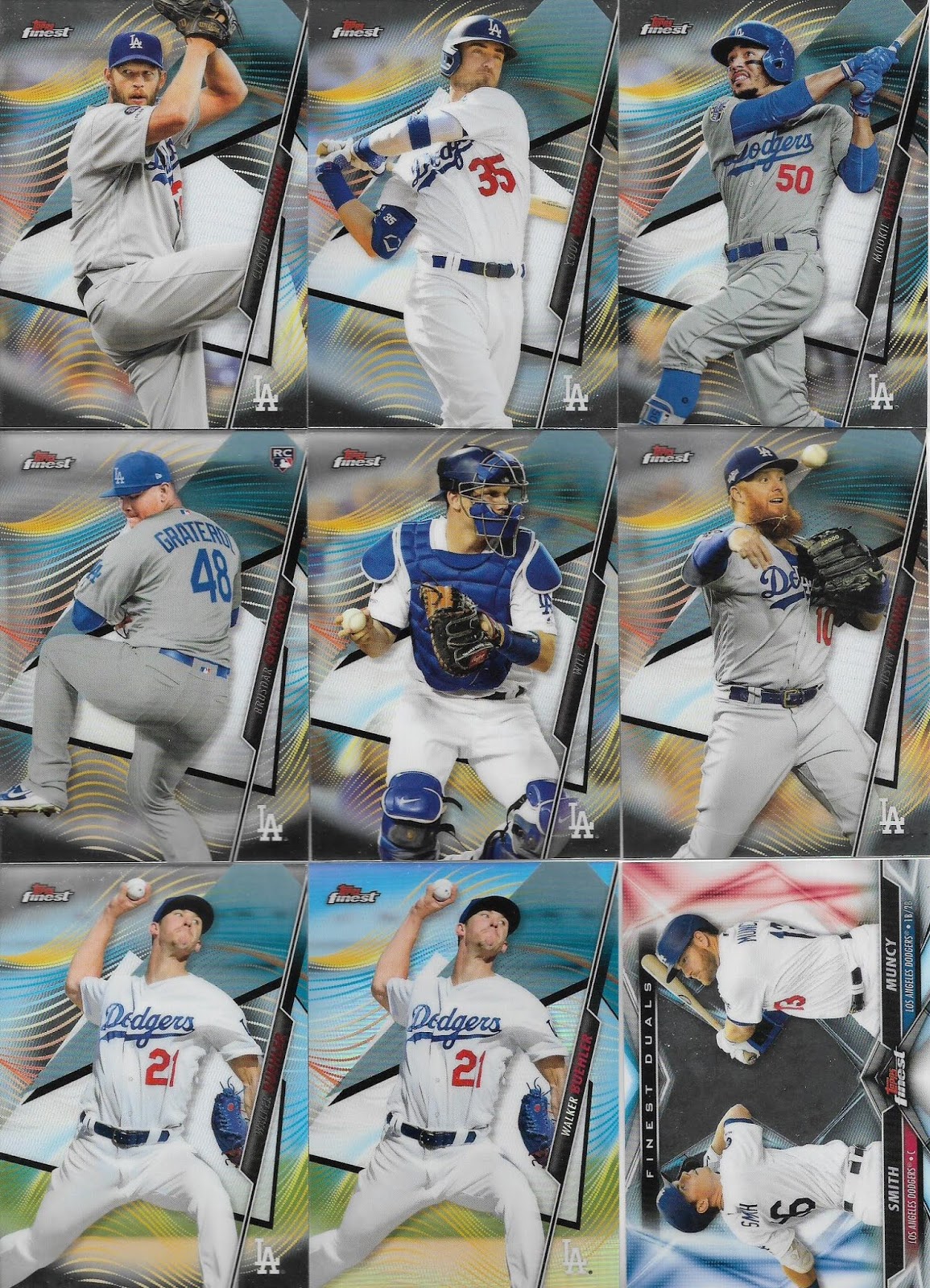 That is all of the 2020 Topps Finest Dodgers, except for rookies Lux and May, plus an additional refractor of Walker Buehler.

This is most welcome because, with Finest -- even though I like the brand -- I end up gathering my Dodgers needs from the set about 10 years later because I can't buy the cards down at the retail shop. I feel very fancy owning almost all of the 2020 Finest Dodgers in the very year they were issued. 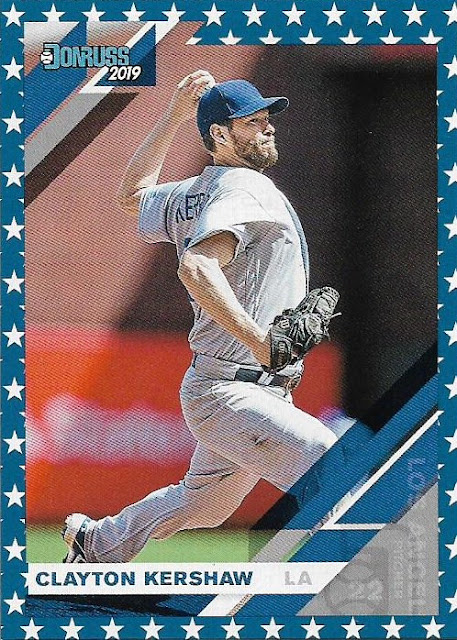 I suppose I should feel fancy with this card, too.

It's one of the bajillion Panini Donruss parallels from last year. I believe this is the Independence Day parallel, which has some sort of dignity to it. At least it doesn't seem as silly as the Baby Shark or On Fire parallels that Donruss wants you to chase this year. We team collectors do a lot things that don't exactly make us proud, but I think putting the Donruss "Look at This" or "100" parallels on our want list is pretty embarrassing. At least to me. If Donruss is doing stuff like this, the border parallels could be infinite. Think of any image to strip around a photo and that's a parallel. There could be thousands and thousands of parallels of one player. 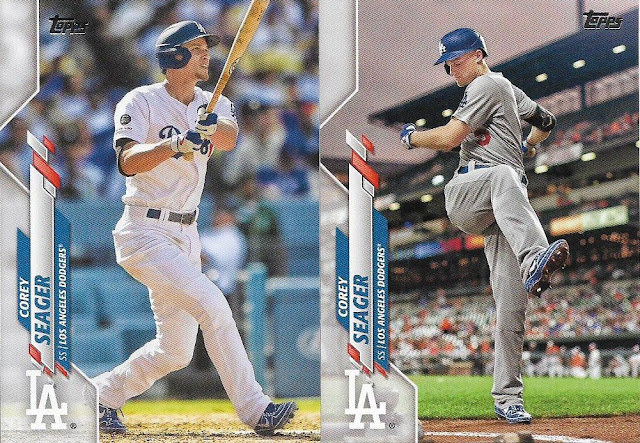 Let's bring it back to something that sort of makes more sense ... maybe. 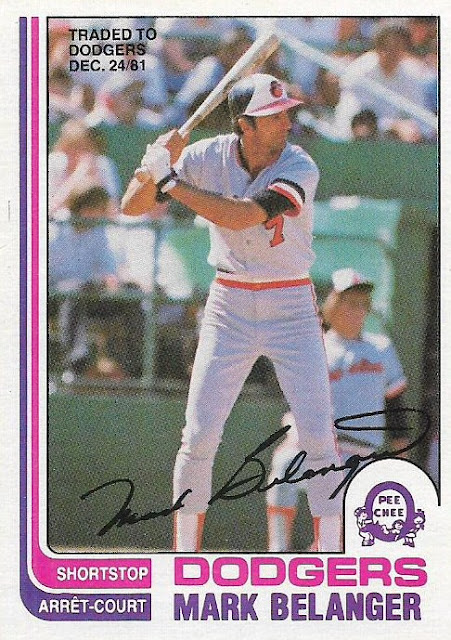 I own this card already. But it's a significant upgrade over the one in my collection and besides it's so gosh darn fun to show, so here it is again. Is there anything more French than a guy named "Belanger" on an O-Pee-Chee card? 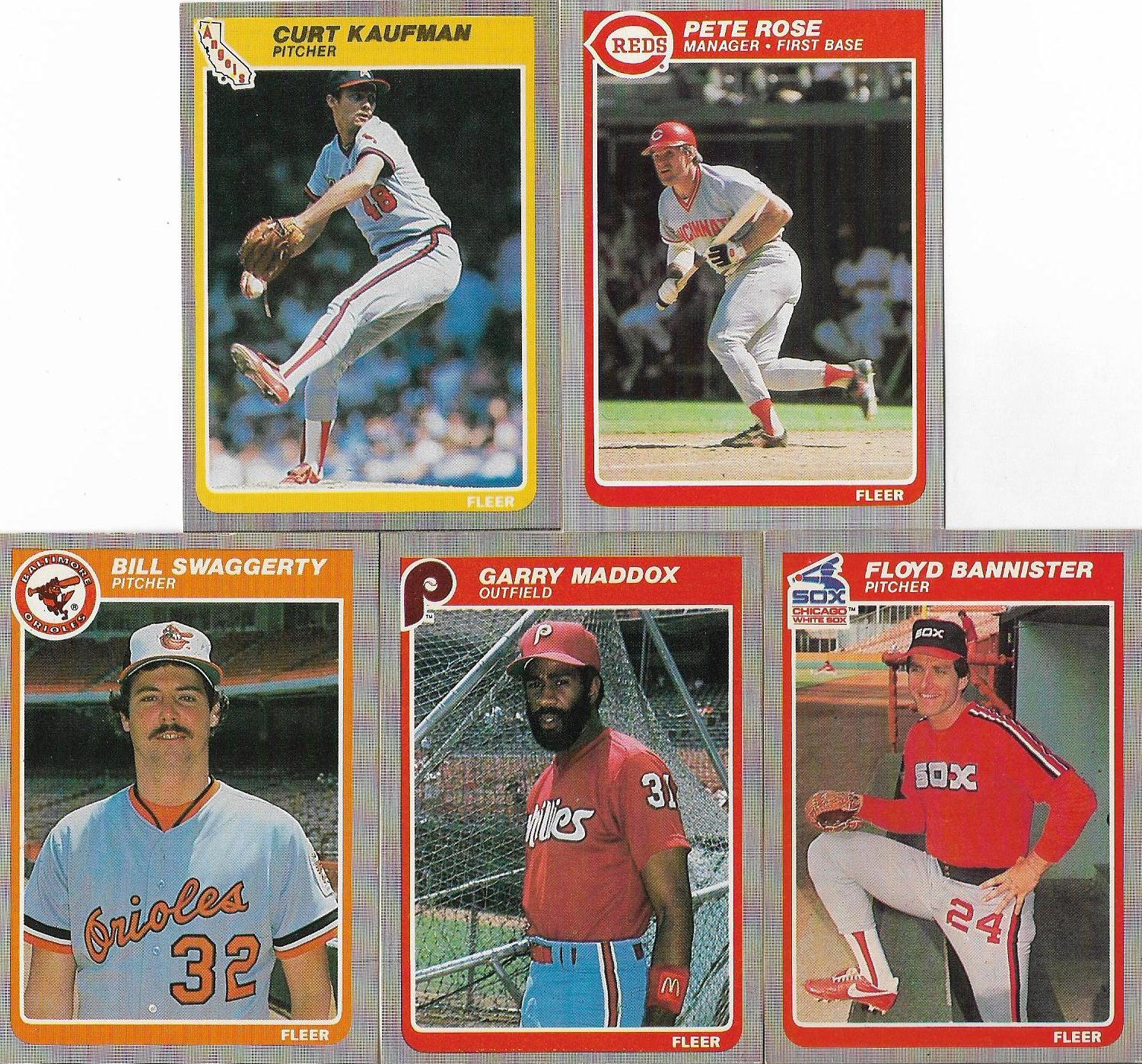 My quest to complete the 1982, 1983 and 1985 Fleer sets has been overshadowed by several other set completion tries lately. Maybe by the fall, I'll focus my attention on these more, but meanwhile, I welcome your charity, especially if it's going to include Pete Rose or any of the other '80s stars I happen to be missing.

Coincidentally, another collector recently sent me a 1985 Fleer Pete Rose, too. So, where I once had none, I now have two.

No. I'm not going to grade it.

Peter K Steinberg said…
I'm going to have nightmares about the hundreds of thousands of possibilities that there are for bordered parallels in Donruss.
August 9, 2020 at 7:46 PM

Collecting Cutch said…
I'm sure some people think that Supercollecting a player is weird and I agree with them. There's some people who prospect and I think that is weird because why pay thousands of dollars for a teenager who hasn't played a single professional game yet? Didn't Brien Taylor teach us anything?
August 9, 2020 at 7:53 PM

jacobmrley said…
Best part about that Hooton card? It was sent to me in an altruistic package that I still have yet to identify the sender of. It was a box full of eclectic things, both vintage and recent, and it came with a note that said "I look forward to your business" but I looked through every transaction I've had on every platform and cannot find that person. So hey! If you are the weirdo that sent me a fun package that included that PSA graded 1982 Hooton card, let me know! Oh, and I apologize that I pawned it off on a different card collector.
August 9, 2020 at 8:06 PM

gcrl said…
I hadn't seen the finest cards yet - they look sharp. And at least that hooton is from 1982. Somewhere in my collection is a graded 2013 topps jered weaver card that someone sent to me for some reason.
August 9, 2020 at 8:09 PM

Jeremya1um said…
I think even if I grew up in the past 2 decades, I would be shaking my head at the stuff you showed like grading worthless cards, endless parallels and SPs. I’m waiting for Donruss to make a poop emoji parallel.
August 9, 2020 at 8:50 PM

Elliptical Man said…
I like the Rose from his brief manager / player stint.

Fuji said…
I'm so glad my scanner isn't the only one that has issues scanning 1985 Fleer. I just scanned a card a few days ago and was wondering what the deal was. As for graded cards, I personally would never submit a card like that Hooton in either. But there are team collectors who are obsessed with building graded team sets. There are player collectors out there that are equally obsessed. And it wouldn't surprise me if there's at least one person who is trying to build a graded 1982 Topps baseball set.
August 10, 2020 at 1:19 AM

Why, you ask? Well, I was at a certain playoff game at Wrigley Field in 2003 and a fan infamously reached over the railing for a foul ball, preventing the left fielder from catching the ball.

I'll give you three guesses who the left fielder was and the first two guesses don't count. That card is the ultimate memory berry for me.

Troublewiththecurve.net said…
What makes the Hooten submission even more curious is that you can CLEARLY look at it and see that it would not grade out at a GEM MINT 10. I guess that would be the only reason to grade it. There are some crazy collectors out there who find a set that they like and then decided to collect nothing but "10's" of each card. I am not one of those guys.

The '85 Pete Rose is a beauty. I've always loved that card.
I also love the Seager SP. Topps does a nice job with the SP/Variations each year. I try to collect as many as I can.

@Fuji - my scanner does weird things as well. I scanned a bunch of pristine '94 Fleer Ultra cards for a post a few months ago and all of them have vertical lines on them. Can't figure it out.
August 10, 2020 at 8:40 AM

Troublewiththecurve.net said…
@Collecting Cutch - I DO remember the Brien Taylor craziness. Sometimes I can't help but wonder if we may see a touch of that with Ohtani. Remember when his Chrome Superrefractor sold on Ebay for like $75,000? (Or something like that)

bryan was here said…
That graded Hooton kills me. It reminds me of when I was at a card show back around 2006 and a guy whose stepdaughter I used to date had a table. We were catching up (I hadn't seen him for many years) and as we were talking,I was looking at his merch. He had a graded 1982 Donruss Tony Perez among a bunch of graded '90s junk era cards. He probably paid more to have them graded than what they were worth.
Oh, and thanks again for reminding me that anything DonNini is trash.
August 10, 2020 at 4:02 PM

Captain Canuck said…
The Set Registry for PSA is HUGE for the new set collector. I know more set collectors on PSA than I do for non graded cards. So, you get 82 Topps PSA graded Hootons.