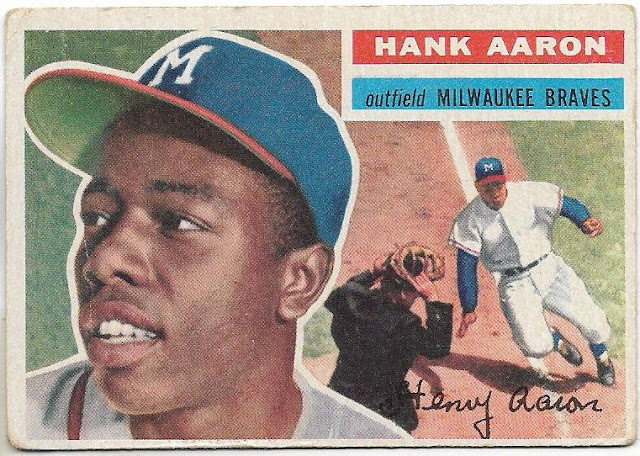 Even though I have been collecting the 1956 Topps set for more than a decade now, the pursuit has never felt real to me.

I wouldn't even be collecting this set if I didn't receive a jump-start back in the early 1980s when my dad brought home a grocery bag filled with mid-1950s baseball cards, mostly 1956, that he received from a co-worker. I ended up with around 110 cards from the set without doing a thing. Although I didn't add a single card to that stash for years, I held on to them and always thought "someday."

Then, over the past dozen years, as I added a card here and there and fellow collectors sent me a card here and there, I became acquainted with exactly what I needed to do to truly commit to collecting the set. I would need to buy cards of legends who I had only read about in books and magazines. Mantle, Mays, Koufax, Williams, Clemente, Berra. Just ridiculous cards.

So the set was always "up there" and "out there," and I could easily dismiss it with a wave of a hand. I'll get to it. Someday.

I now own the Sandy Koufax card. I own the Ted Williams card. I own Whitey Ford and Bob Feller and Ernie Banks and Jackie Robinson.

And I own the Hank Aaron card.

I obtained the Aaron card last month with birthday cash from my sister-in-law. I teased to my triumphant acquisition during my last 1956 of the Month post a month ago. In it, I said that the player on the featured card, George Zuverink, was a set-up for my next '56 of the Month post. Zuverink is the third-to-last name listed in a complete alphabetical rundown of every person to play major league baseball. Aaron, meanwhile, is tied for the second name (with his brother Tommie) in that alphabetical list of every major leaguer.

I almost always purchase cards around my birthday thanks to cash and gift cards. I've generally been a quantity-over-quality shopper at these times just because I see SO MUCH quality and it's too enticing to ignore.

But with COMC delaying shipments for months, my traditional birthday site was off limits and I've learned to shop in other ways, sometimes reacquainting myself with old shopping site friends. And now, quality over quantity is the way to go. 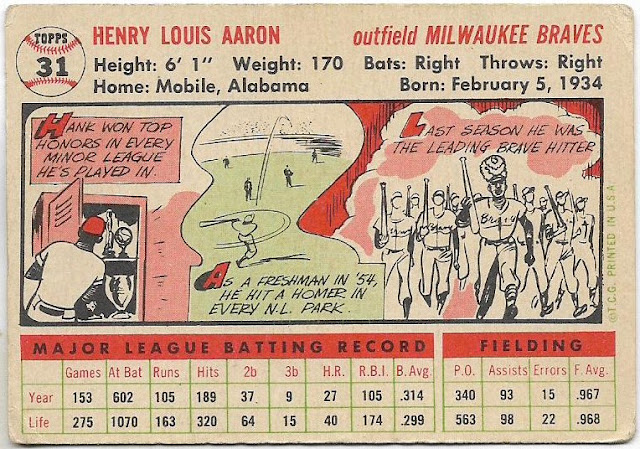 Good stuff. Not a lot of excitement here but a lot of big numbers. Just like Hank.

So, when you need so many superstars from a set, how do you choose which one to chase when you have cash to burn?

A few '56 cards are still a little bit too intimidating, namely Mantle and Clemente. So I scratched those off my list. Then I simply went with someone who meant something to me and someone I could find for the right price.

Even though the bulk of Aaron's career occurred before I became a baseball fan, he is still a large part of my formative collecting years. Hank Aaron's first Brewers card appeared in the 1975 Topps set, the first set I ever collected. And I pulled Aaron's card that year in a pack I shoplifted from a drug store (oops!), before trading it to a friend later that year for Ron Cey's All-Star card in what some would say was a subconscious act of guilt.

So, Aaron on cards has meant a lot to me right from the opening bell.

Adding his card to the '56 collection means I'm down to 20 cards left, plus the two checklists. Yeah, there is still Killebrew and Aparicio and Mays out there, along with some of the others I mentioned earlier. And, yeah, I'm still going to take my time on this. Birthday money shows up only once a year.

But things are moving a little bit faster now that I'm in the midst of "someday." 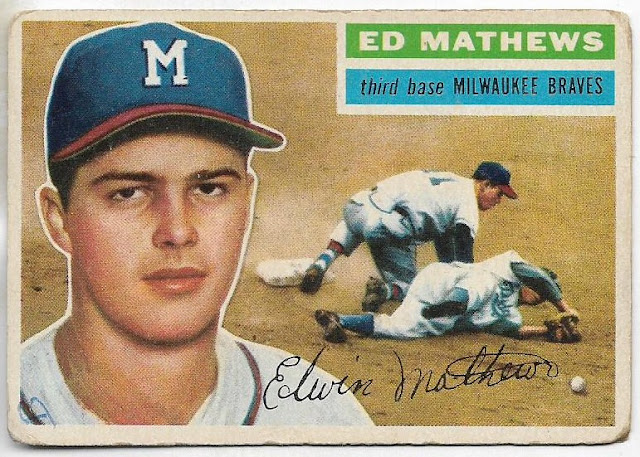 Aaron's old teammate joined him in the collection not even a week ago.

Jeremya1um said…
Wow. Congrats on getting the Aaron!
And here I was going to guess you got a David Aardsma card.
August 3, 2020 at 7:49 PM

Old Cards said…
Great looking cards of two excellent players. I was fortunate enough to see them play and collect their cards during the 60's and 70's(Aaron). Impressive that you have acquired Ted Williams and Koufax. I am relatively sure that your biggest outlay of cash will be for the Mantle (when he is added back to your list), even if you have to settle for a low quality one. Best of luck to you on your quest for completion.
August 3, 2020 at 9:52 PM

Mike the History Teacher said…
Nice acquisitions! It's fitting you added both Aaron and Mathews to your set at around the same time. They hold the record for most career home runs by two teammates, a few ahead of Ruth-Gehrig.
August 3, 2020 at 10:10 PM

gcrl said…
the 56 aaron is such a great card - congrats on adding it to your collection! i am sure it is fun to look back and see how receiving those first 1956 cards set this pursuit in motion. the mathews is great, too - i won't be tackling this set, so i put mine in my lurker collection thanks to pee wee getting bowled over.
August 3, 2020 at 10:45 PM

shoeboxlegends said…
What a tandem there! Congrats! I scored a '55 Aaron earlier this year, but that beautiful '56 is still on my list to target. You got a great copy.

Fuji said…
Congratulations on crossing that one off your list. That grocery bag filled with 50's cards sounds awesome. So does your set build. The last 56 I picked up was the Cardinals team card (w/Musial) and that was last year. Maybe this post will inspire me to end the drought and buy one this week.
August 4, 2020 at 11:58 AM

gregory said…
Your "WOOOOOOOOOOOOOOOOOOOOO!!!!" label is quite appropriate. I see you also used it when you completed the 1956 Dodgers team set. Well done, Night Owl!
August 4, 2020 at 1:45 PM