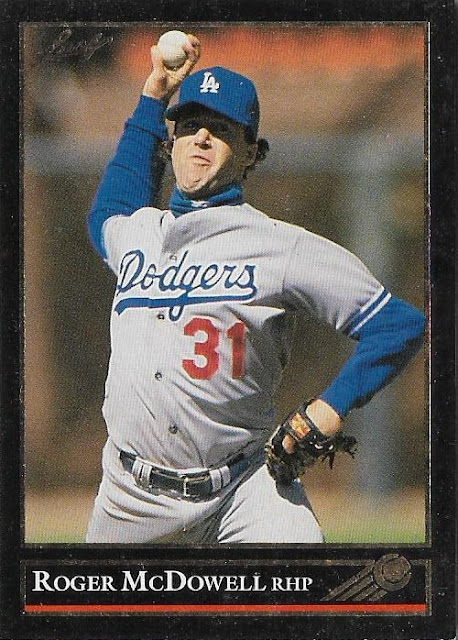 A couple of weeks ago, I completed a task that has been going on for longer than I've run this blog.

I've always wanted to know how many cards I own, but since I delayed counting them by like 30 years, it took a few more years -- and years and years -- to catch up, and then to add all of the incoming cards. And add the fact that I was doing all this on an obsolete Microsoft spreadsheet and it's been a painstaking process that requires large breaks to preserve my sanity.

But I stuck with it and finally completed the "A to Z" portion of my collection with the final tally for Ivan Zweig (one card). Totaling everything up, the program spat out: 81,385.

Now, I know that's not right. How far it's off, I have no idea. But I catch mistakes in my cataloging all the time and just think of all the mistakes I don't catch.

It's also not the complete total. Because I haven't totaled any of the league leader cards, or postseason cards, or SuperStar Specials, or team cards, or checklists, or all the random cards in which Topps, or whoever, throws three guys together in one photo and says "that's a card."

I also haven't totaled any of the non-baseball cards. So I have to add football and hockey and all the music cards I own. Oh, and there are the Allen & Ginter non-sports cards that, for whatever reason, I didn't include in my count for the first five years of A&G.

And I continue to add cards almost every day. The new total is now 81,904.

Although the total isn't completely accurate, it does give me a good idea of how much the Dodgers influence my collection. I have a separate count of the Dodgers in my collection, which is listed on the sidebar of my blog. Right now, that total -- which is somewhat more accurate than the grand total -- is 23,076.

That is a little under 30 percent of my total collection. That's pretty good for someone who defines himself first as a set collector.

I have so many Dodgers cards that my duplicates are perpetually overflowing. Recently, I offered up my Dodgers dupes to people who wanted them. A handful of people took me up on my offer and I've sent them out. Some have received them, some should be getting them any day now.

But I still have so many left. I'll be preparing a package for my fellow Dodger buddy, Oscar, in the next week or so. Anybody else?

Because while I was shipping out those Dodgers extras, another large box of Dodgers cards, generously donated by reader and collector Bill, as a "thanks for the blog" gesture, arrived at my door. Easy go, easy come!

He wrote a nice letter documenting his trip through collecting (been at it for longer than I have), he has seen it all. And when he heard I was distributing Dodgers dupes, he wondered whether I wanted the cards, but then he realized, as all collectors do, nobody can truly have too many cards!

I counted about 900 cards that he sent. And, I will say, I needed about 80 of them. Yes, that's how many Dodgers I have. But it is all good. All good. Because some of those extras were already distributed, and let's focus on the only thing I'm focusing on: 80 Dodgers cards I didn't have!

I'm going to break these up by brand just because it's notable what company or companies had the most cards that I needed. 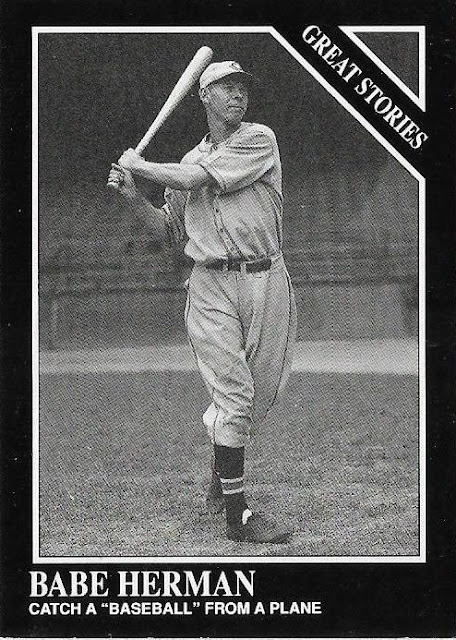 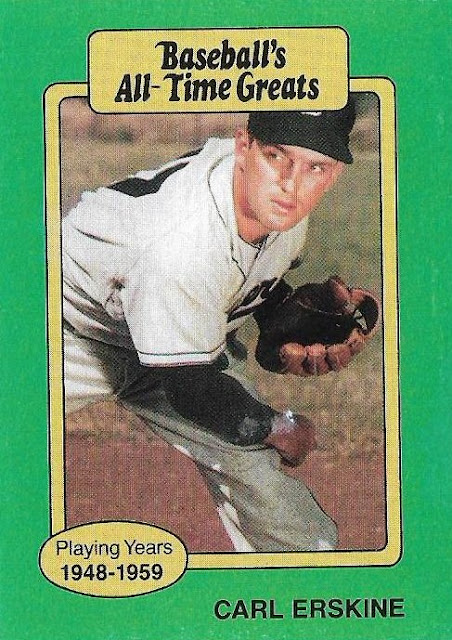 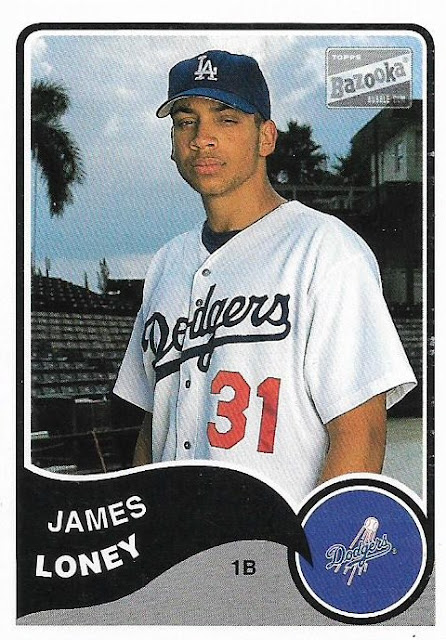 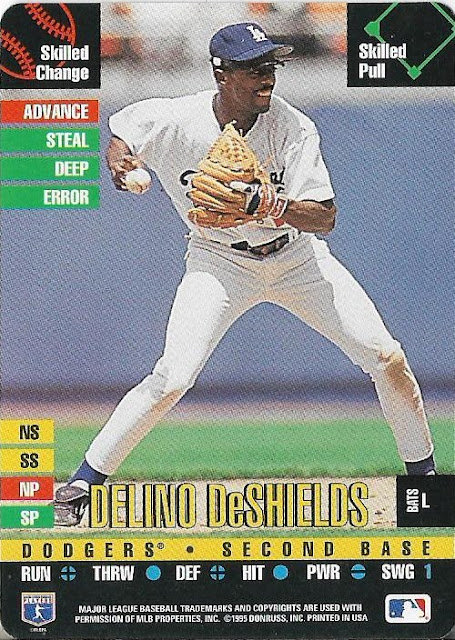 A few one-card-only items from four sets. James Loney is mad at me for scanning his card crooked. The Erskine Hygrade leaves only Don Drysdale as the non-variation needs from that set. 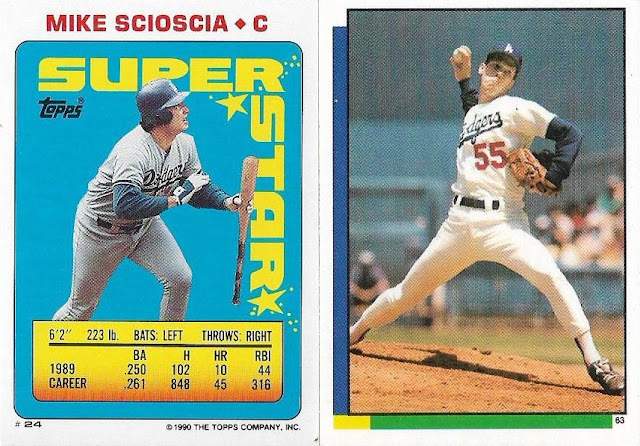 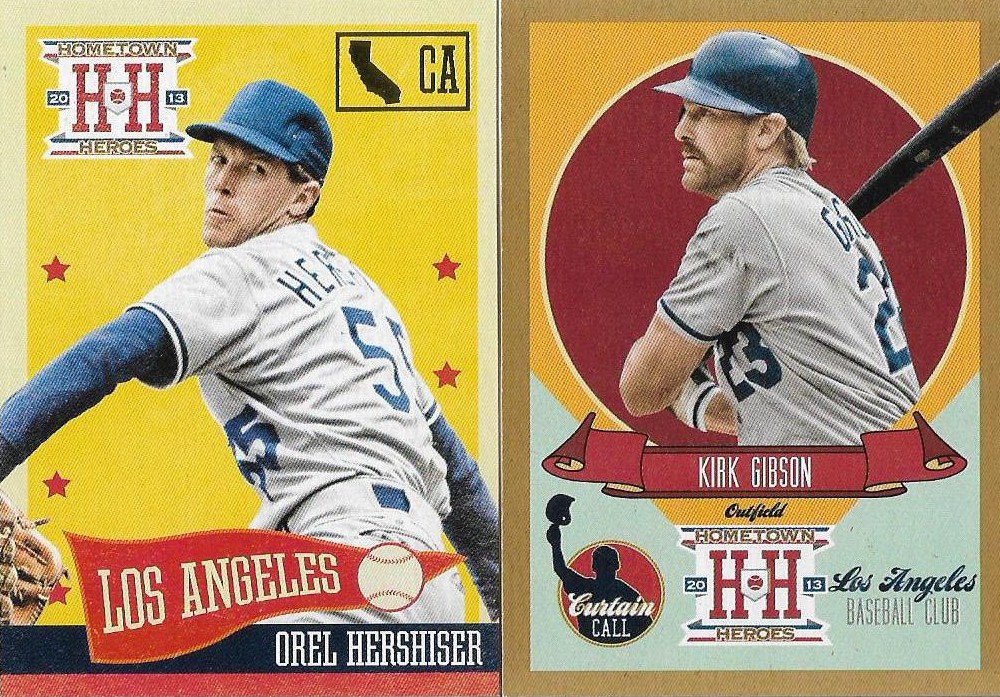 The late '80s stickers, I admit, I don't pay much mind. Those are two of the overlooked. Who knows how many others I need. 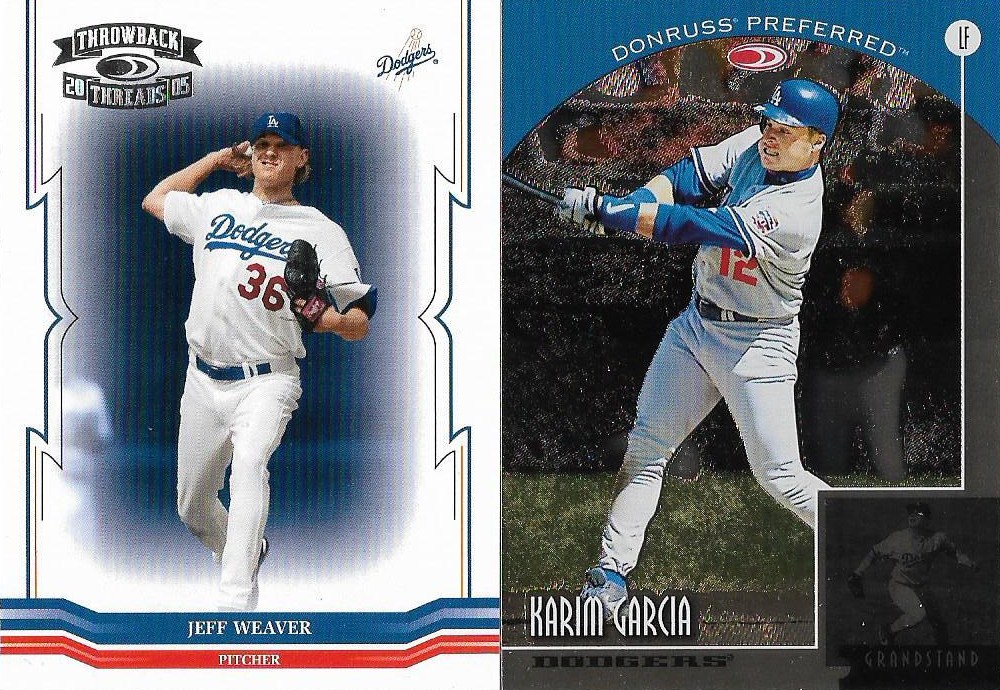 Donruss experienced a great deal of difficulty cracking my Dodger collection. Just two cards. But if it makes Bill feel any better, I did allot some of the '88 and '89 Donruss Dodgers to the main set collecting bids for both. (Although they're really not bids, don't send me any!) 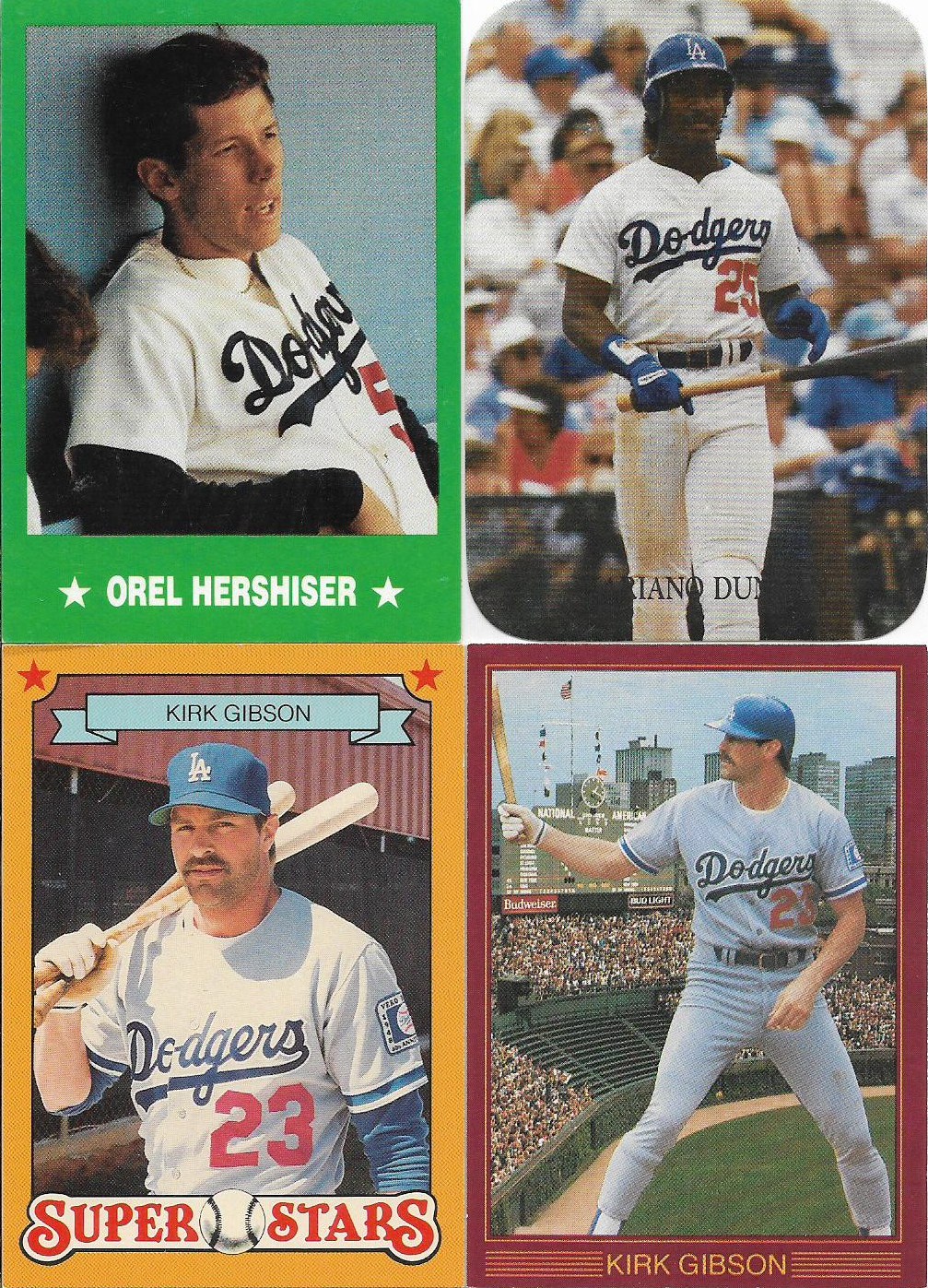 Wild. I love late 1980s Broder cards probably more than I should. They're just so damn interesting. Just look at those two Kirk Gibsons! Tell me there was anything like that of Gibby from the main card companies at that time. 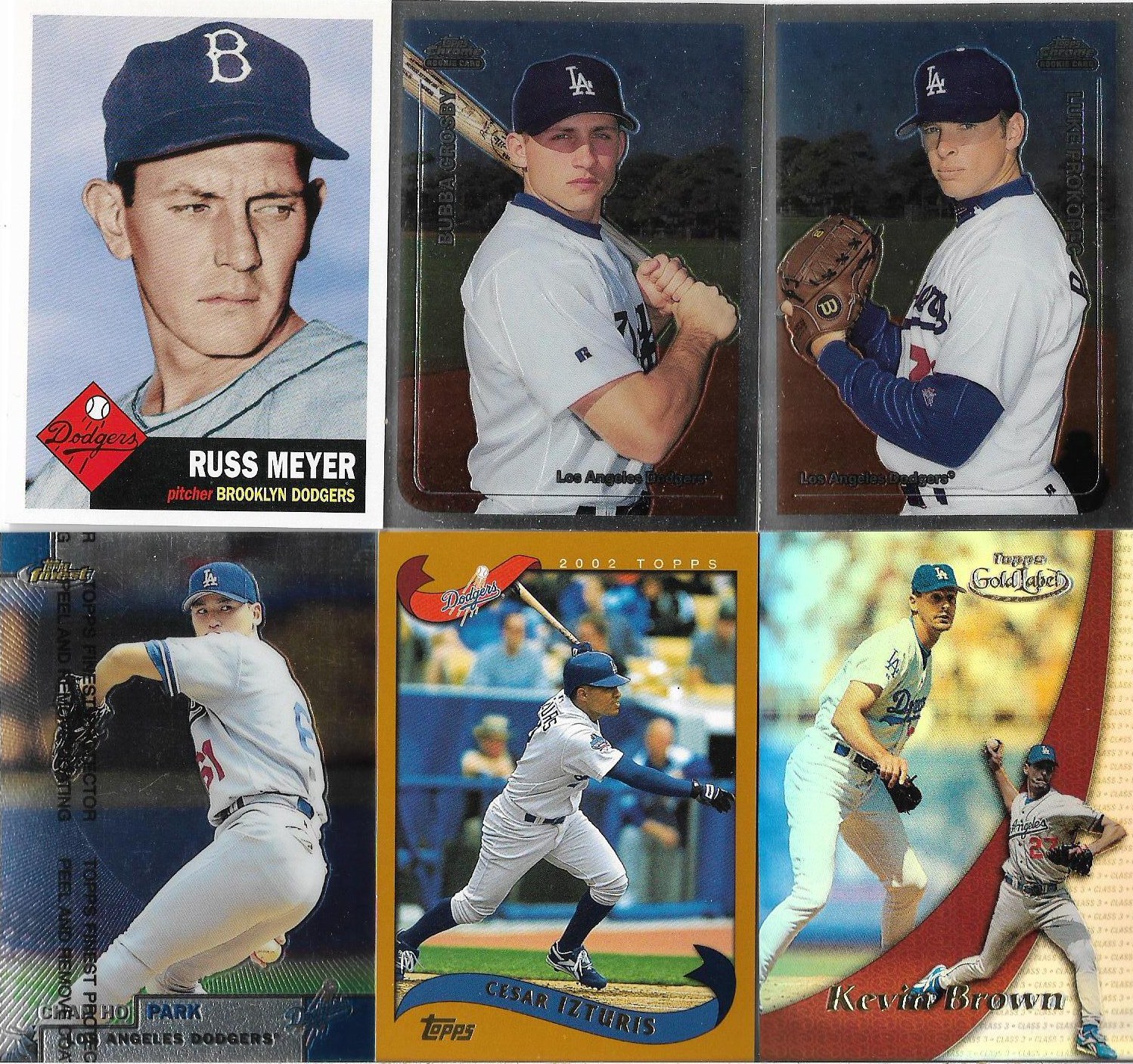 Topps is next. I'm sure I have more Topps cards than from any other company. I am not crazy enough to split up those totals though. Something about Bill's shipment made me realize that neither of these Heritage leaders cards were in my Dodger binders. It stunned me for a moment.


OK, now we're at the final two companies that featured the most cards that I needed. The only hint I will give you is neither of those two are Upper Deck. Not a single Upper Deck card broke through. I don't know what that says. 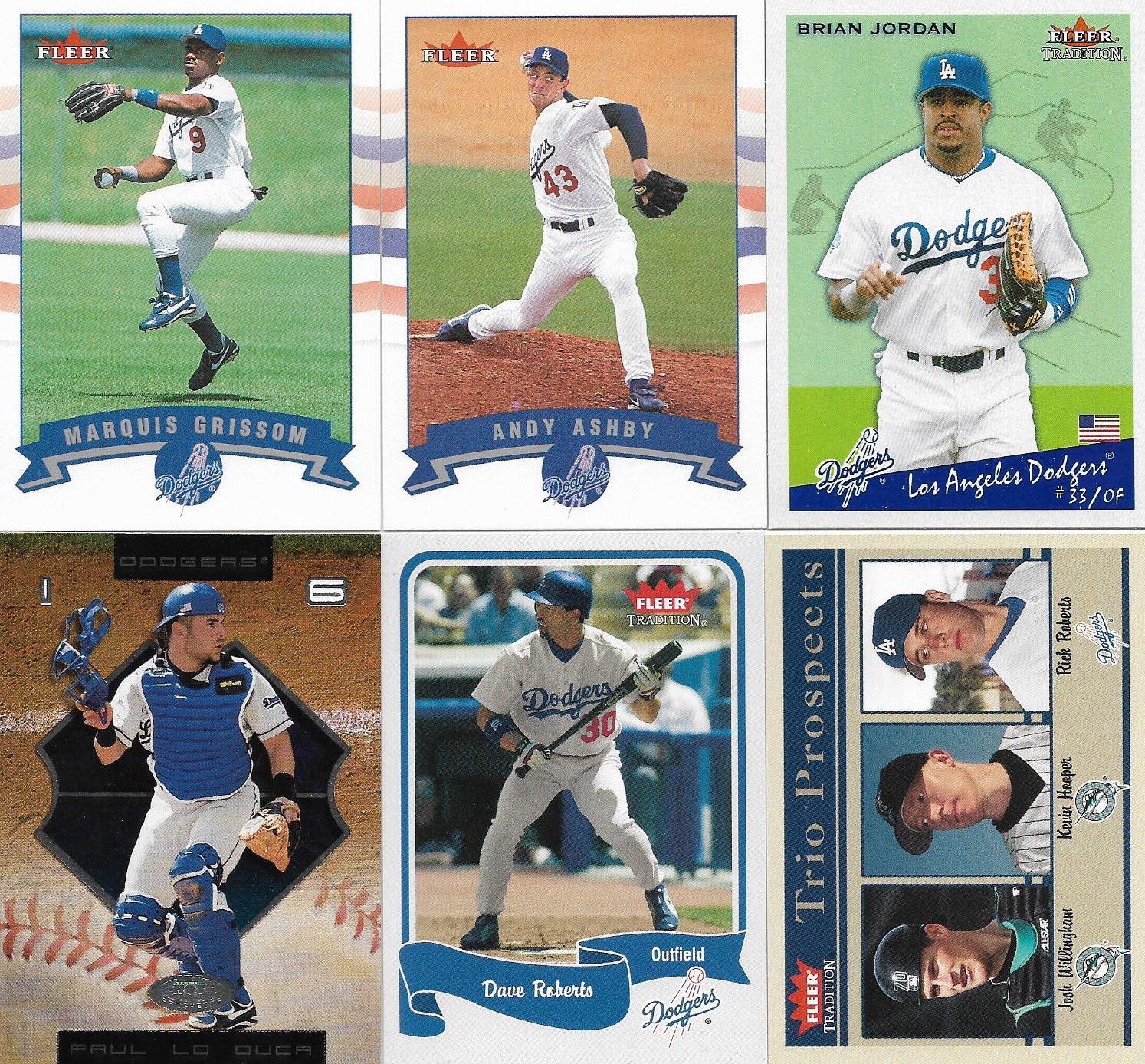 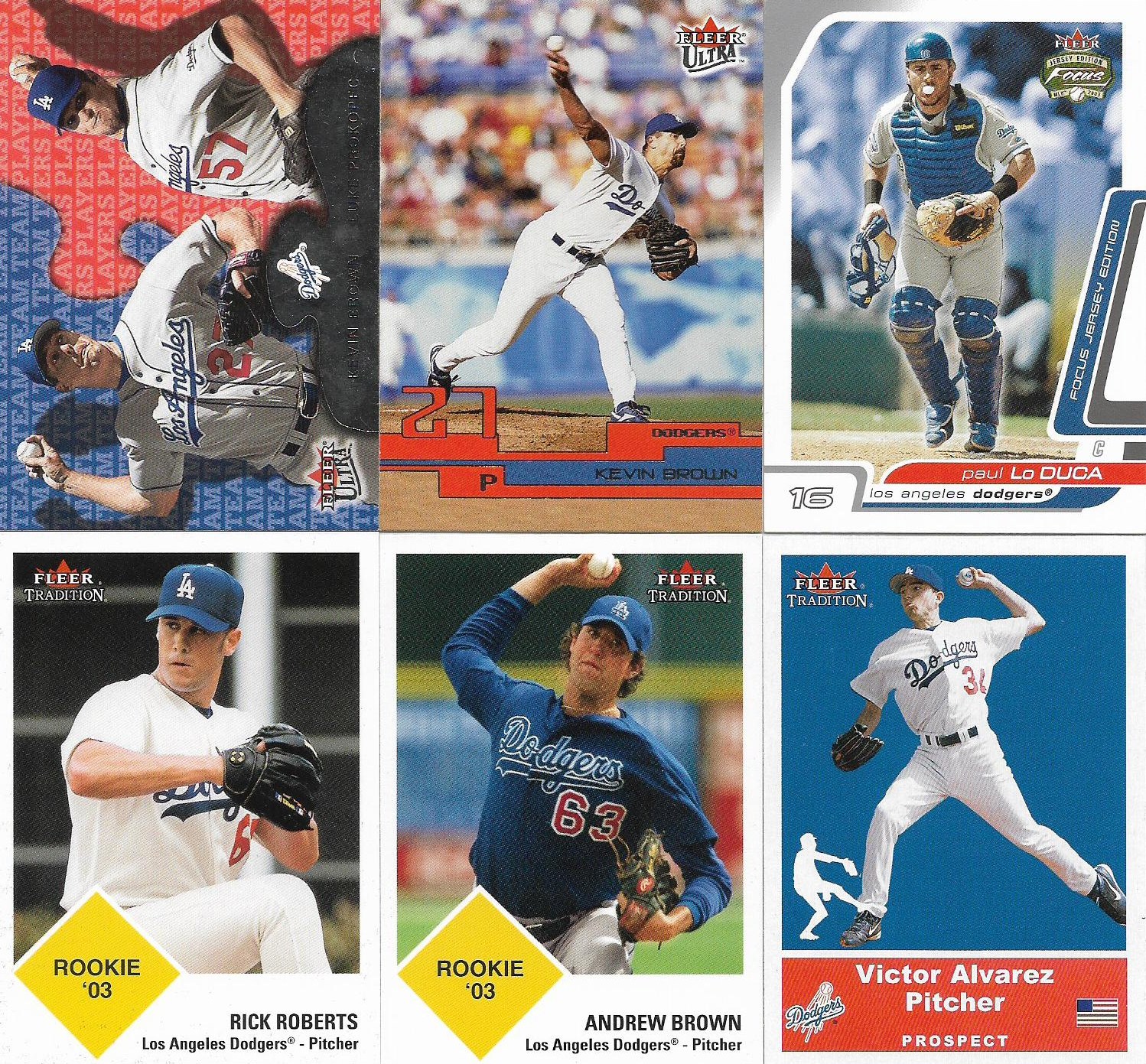 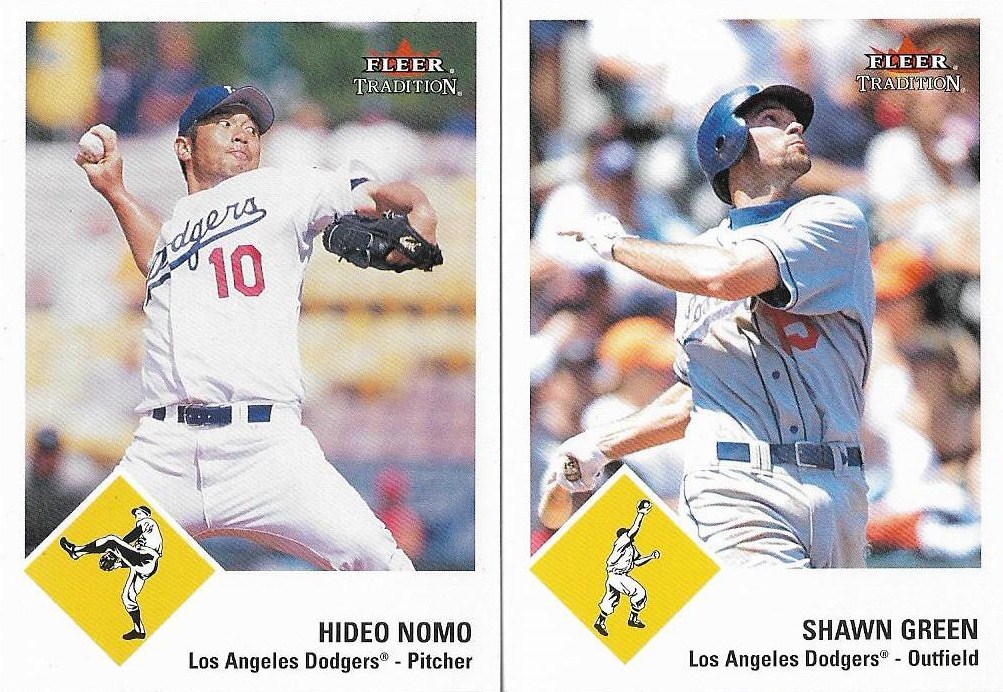 A lot of these cards had been elusive for a long time, particularly the 2003 Fleer Tradition. There were so many of those that I shipped several off to gcrl. 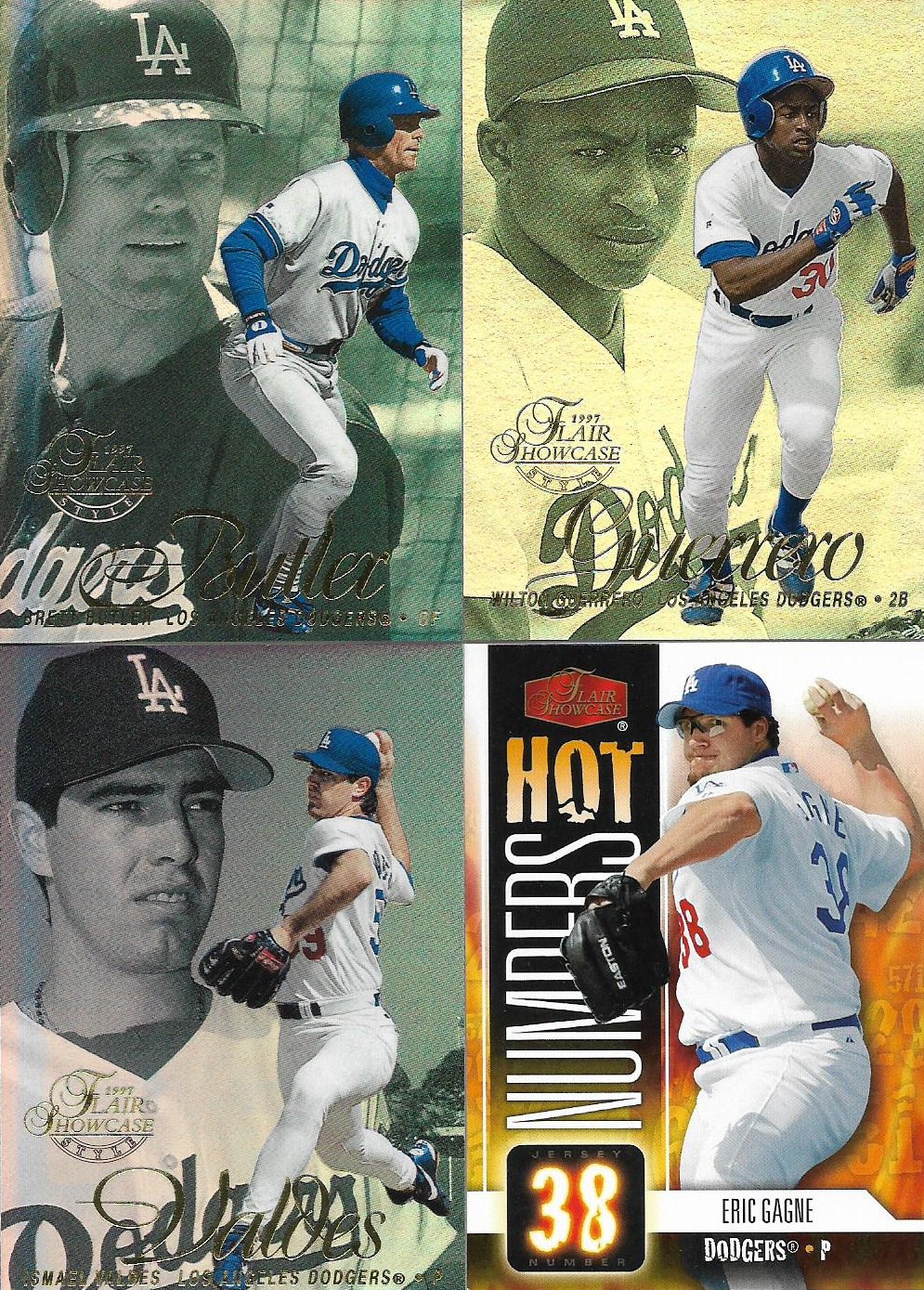 And I've got to throw in Flair with Fleer. Love that Gagne insert.

Finally, the one company that appeared the most by far and also featured the most cards that I needed ... 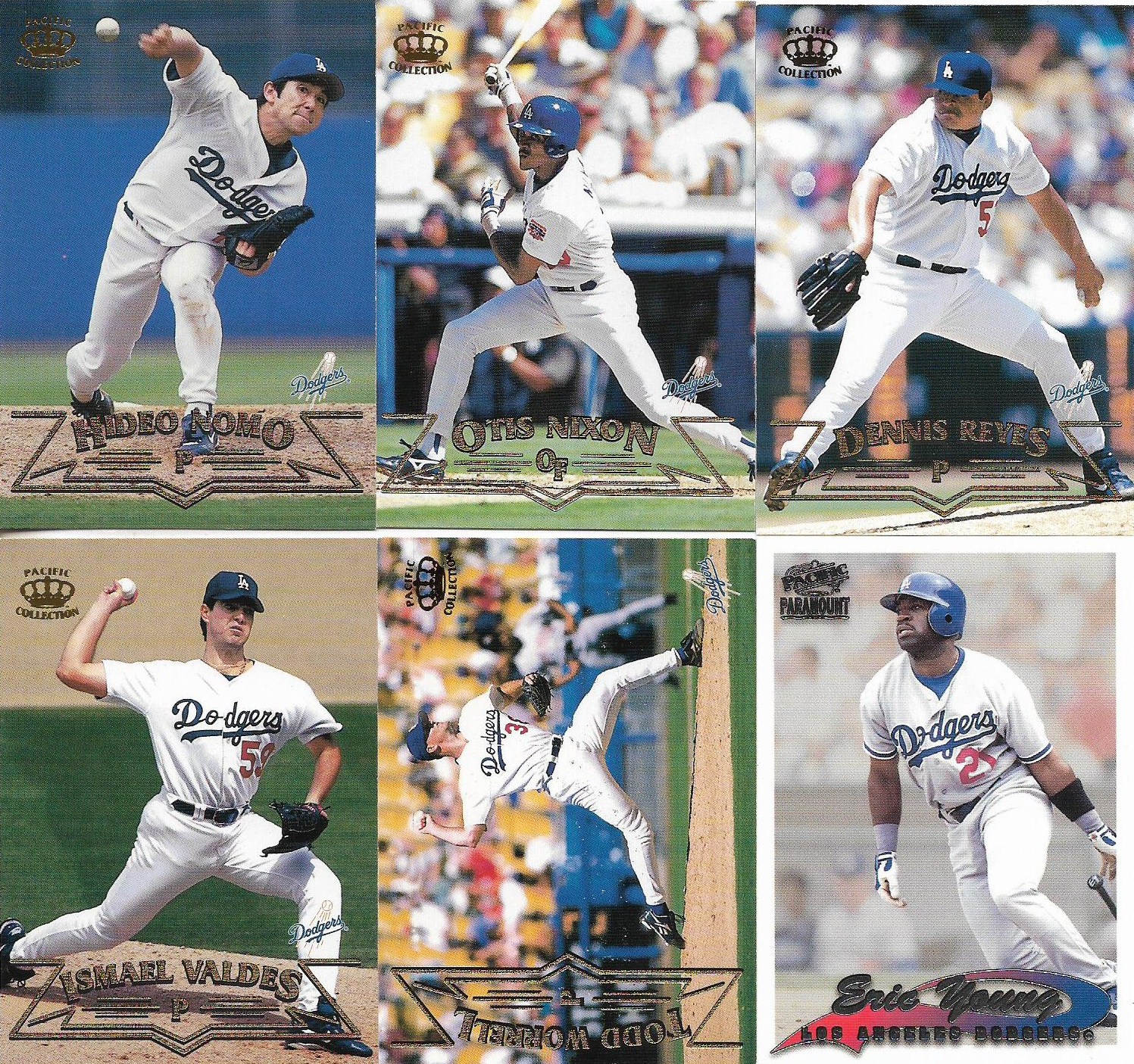 Listen, I'm not at the stage anymore where every card issued in the mid-to-late 1990s/early 2000s is new to me. Twelve years of blogging will do that to a person. But it's simply amazing how many Pacific cards there were then. 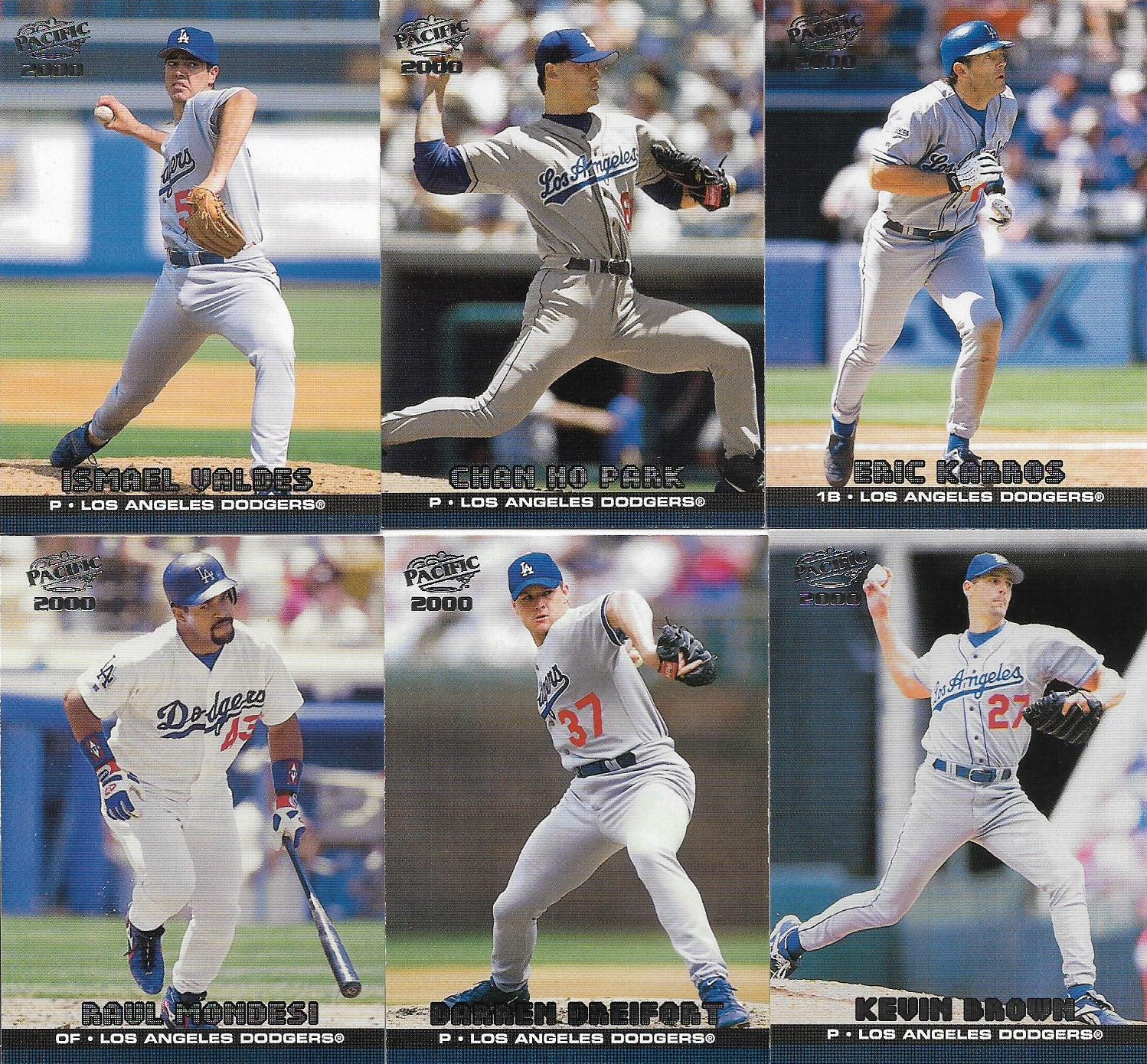 Some welcome Pacific needs from 2000. 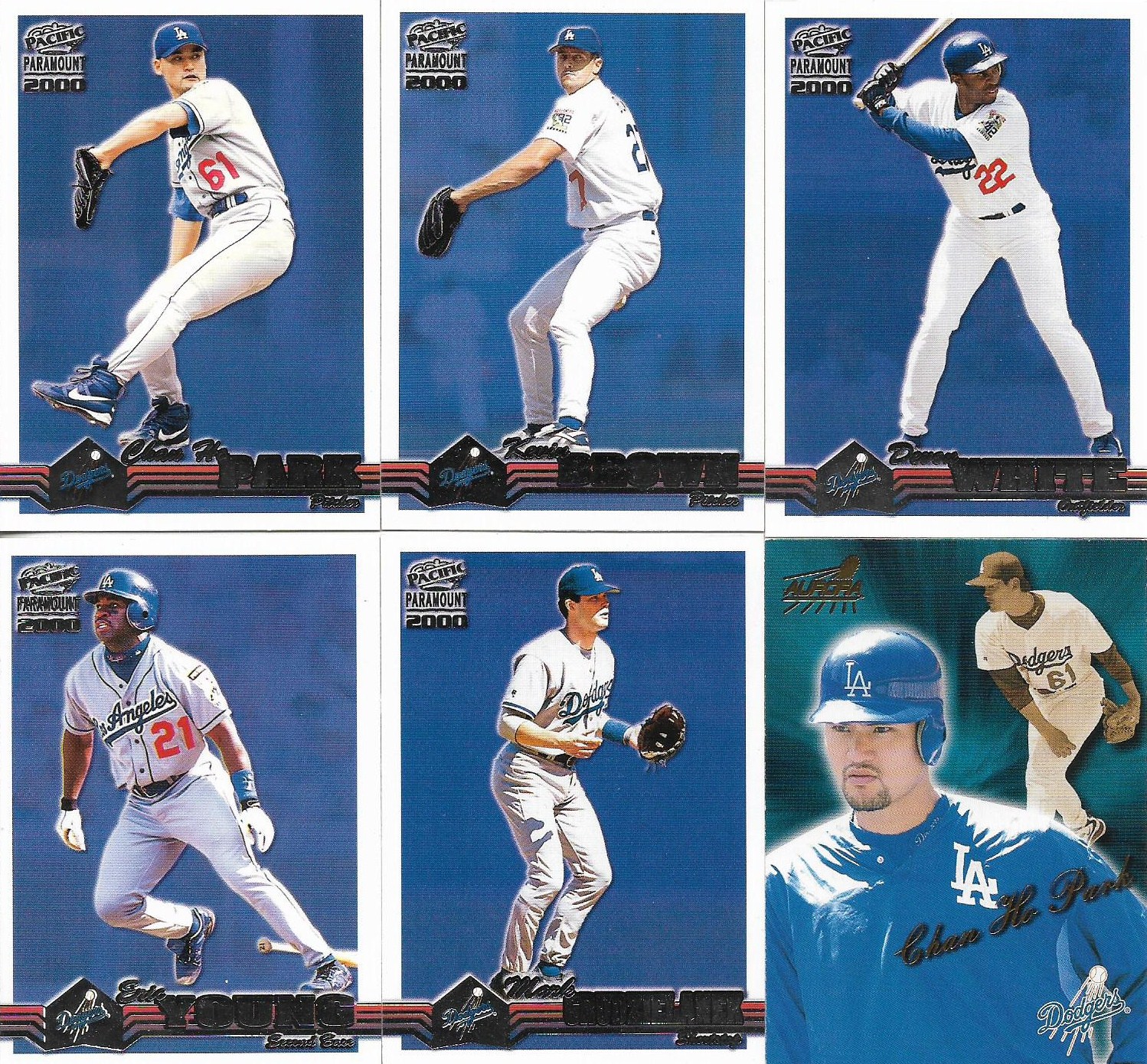 Pacific in its blue period. 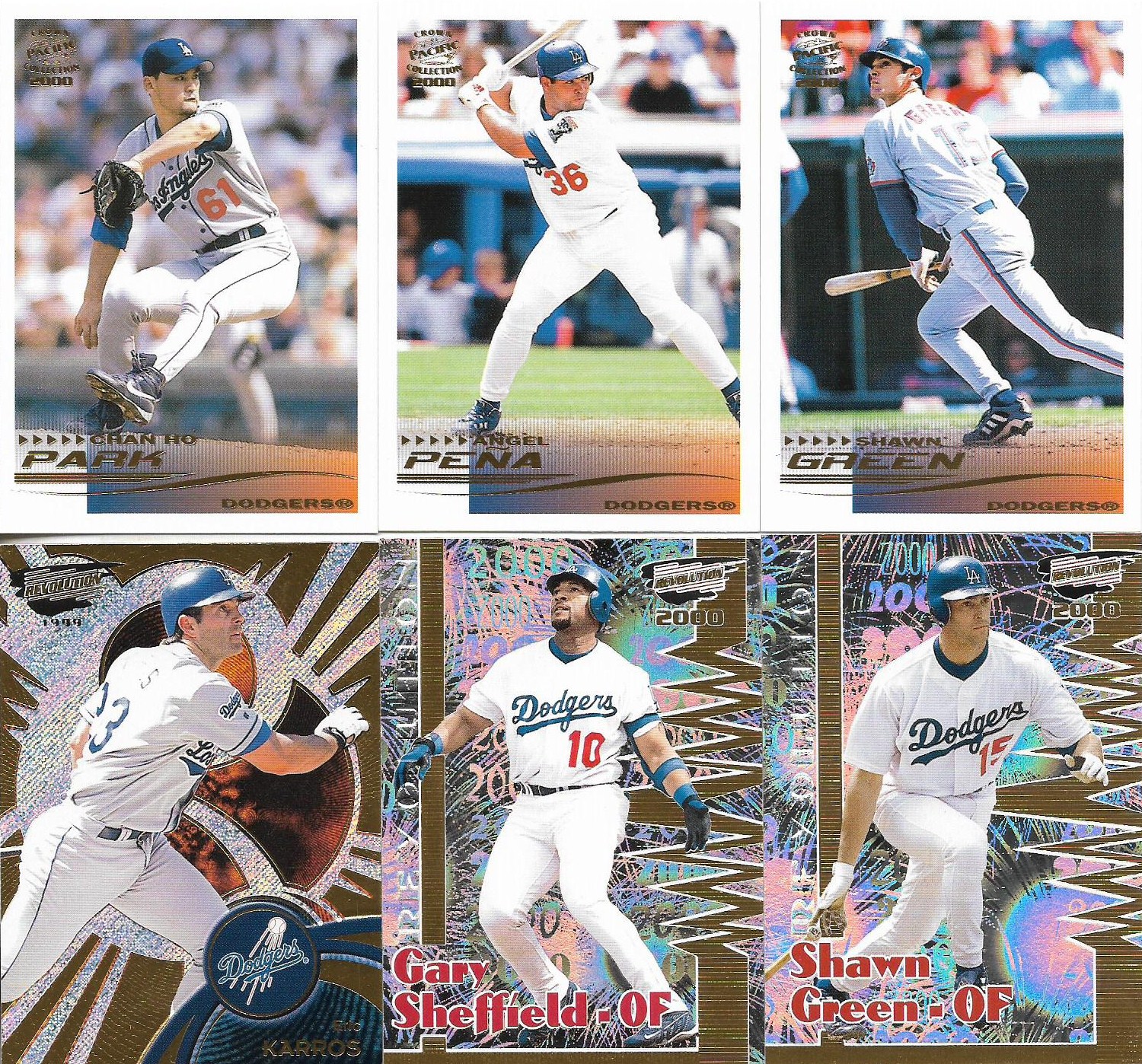 Pacific during the day and Pacific at night. 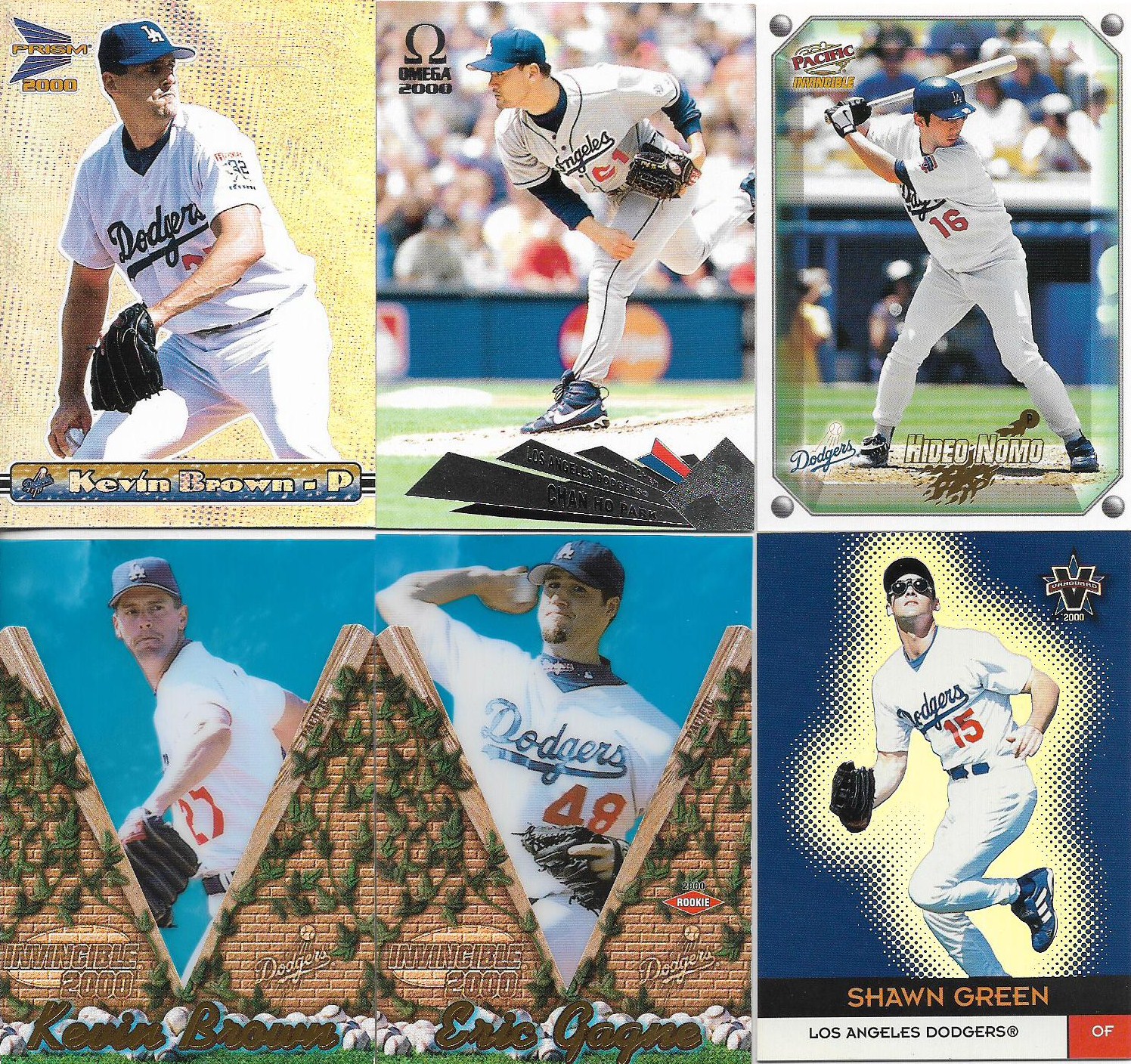 Wild and out of control Pacific.

A few more I forgot. 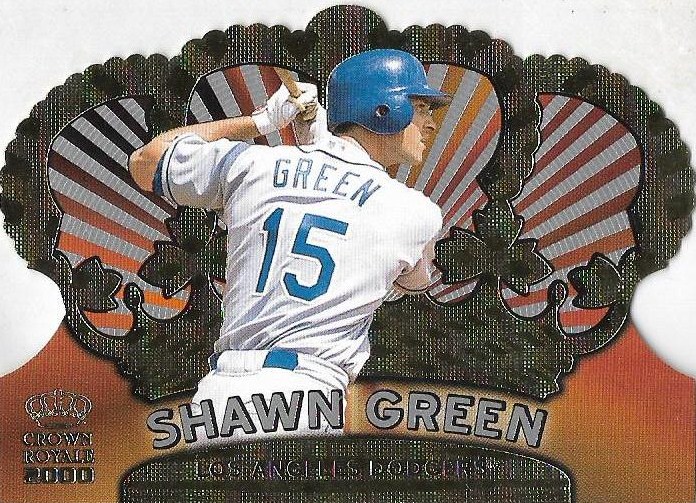 OK. One more I forgot.

So, that was delightful to go through, as well as quite the process as I matched up cards, many from areas that aren't etched in my brain, like stuff from the '70s and '80s.

But I'm used to long, drawn-out projects when it comes to my collection.

Bo said…
I didn't reply last time, as I figured the Dodger fans would want the cards, but if you're really trying to give them away, I'm always happy to take cards off of someone's hands, regardless of the team.
Thanks!
Bo
August 15, 2020 at 1:56 AM

kcjays said…
I would suggest adding your cards into Trading Card Database. It is time consuming, but can’t be much different than the spreadsheet you’re using. I enjoy using their database to keep track of my Royals collection.
August 15, 2020 at 10:58 AM

Nick said…
Had a feeling Pacific would be #1! I'll never come anywhere close to having all the Pacifics I need, and I think I've gotten to the point where I'm okay with that.

I've been meaning to count my cards for years. Should probably get on that soon, because I'm really interested in knowing how many I have.
August 15, 2020 at 11:31 AM

RWDsr said…
Getting back into collecting and would appreciate any cards sent my way-thanks
August 15, 2020 at 2:42 PM

David said…
One way I look at my collection, as a fellow set collector, is percentage of Topps flagship cards that I have, from the base sets. I know, this is just a small subset or what is out there, and I do have other sets and interests but if you look at Topps sets from 1952 to 2020, excluding all inserts, variations, traded/update sets and parallels, I think there are 44,582 cards. I have 29,870 of them, or 67%.

gcrl said…
I agree with you - outside of a couple certain 1989 upper deck cards, kirk Gibson's dodger major manufacturer cards from his playing days are pretty uninspired. Looking forward to cards in the mail. Thanks!
August 16, 2020 at 5:20 PM

GCA said…
Wow, I kinda figured (from your want lists and posts) that Dodgers was a much larger percentage...
Would love to put my stuff in the TCDB, but it would take me years.
August 17, 2020 at 3:57 PM