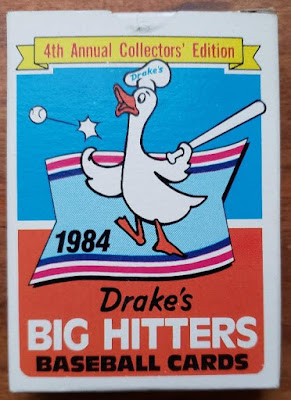 With all of the 1980s boxed sets that are now in my possession, I've thought a little bit on how to best present them on this blog.

I have a couple of ideas, but they would require me going through all the cards and there's no time for that now. What do I do in the meantime?

Well, I thought I'd present my "Joy of a team set" series but with a little twist and make it "joy of a boxed set."

Today's boxed set is one of my favorites from the ones reader Alan gave me. Love the Drake's. And I love that duck mascot. Why a duck? Did you know the Drake's duck mascot (his name is Webster) was created by a consumer poll in 1981? Did you know that was the very first year Drake's Big Hitters baseball card series was released? I now wonder whether the duck was created specifically for the card set.

Anyway, this is the 1984 Drake's series and I am without my trusty scanner. So you're going to have to put up with poorly-lit pictures. 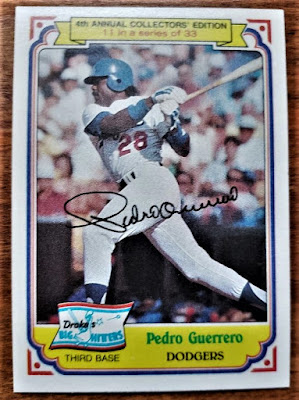 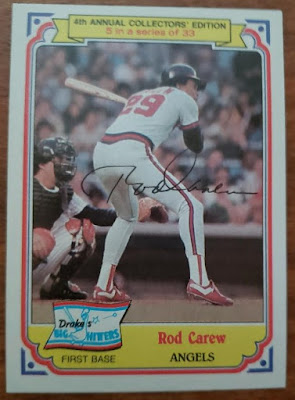 Second-favorite image in the set: Rod Carew. Nobody talks about Carew's batting stance anymore (or his magnificent signature).

Players I've talked to: Sadly, none. 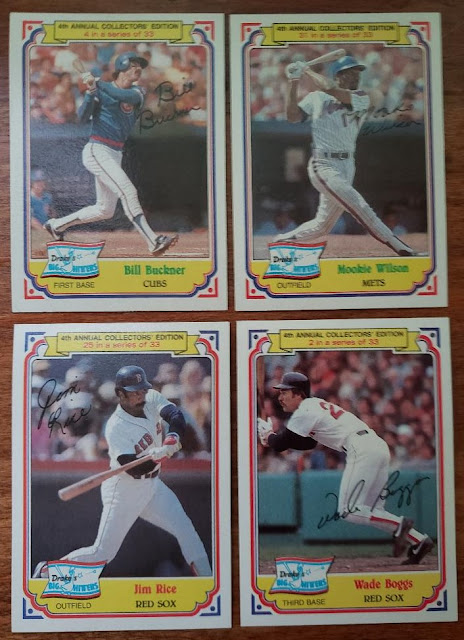 Players I know who have been in my home county: Bill Buckner, Mookie Wilson, Jim Rice, Wade Boggs. All four were interviewed at one point or another for a story in the newspaper where I work. 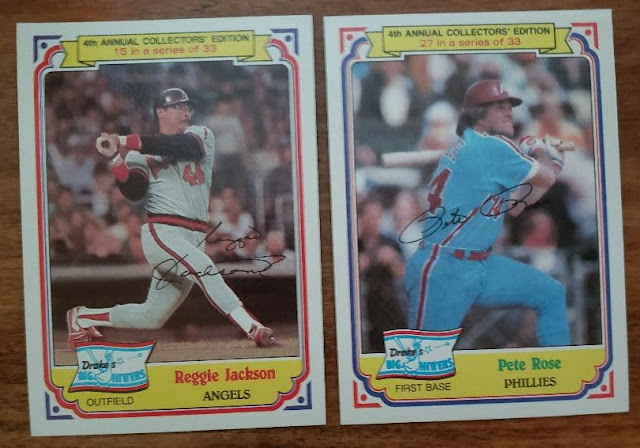 Cards I received an unexpected thrill pulling: Reggie Jackson and Pete Rose. I would not say I was a fan of either one of these players when I was a kid. In fact, I positively despised them. However, there is also no doubt that they were two of the biggest names in baseball during my childhood. It was always a thrill pulling them and I got that same charge when I opened this box. This is why I open 35-year-old cards! 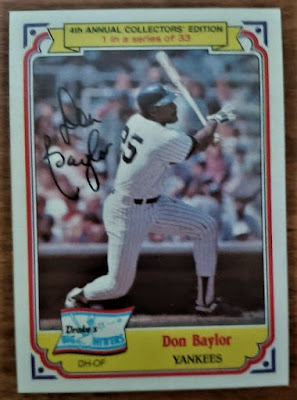 Best display of old-school card feature: The facsimile signature seems more and more an aspect of a bygone era every day. I even thought to myself "hey, yeah, they used to do that" when I spotted the inky display on the left of the Don Baylor card. 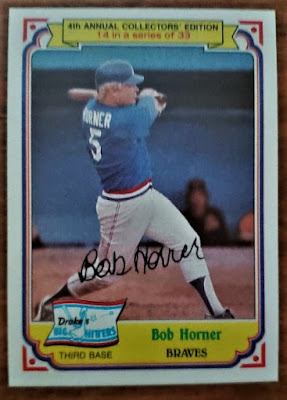 Best visible sign they built ballplayers different back then: Get a load of Bob Horner. How in the hell did he get around on that? 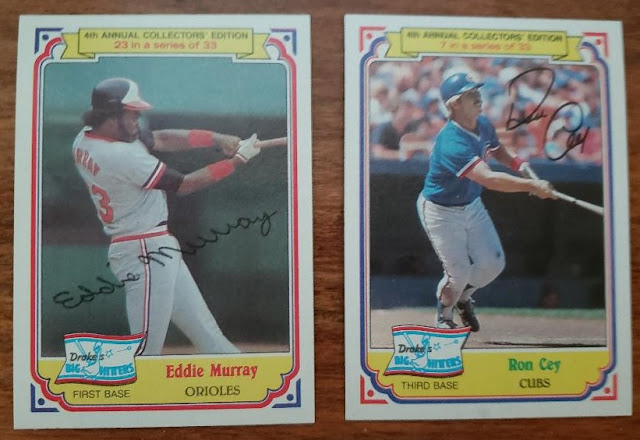 One of the more interesting things about the Drake's sets is that every photo is of a batter. Long before specialized insert series, this was an almost bizarre look. In fact:

Set's claim to fame: This is the last Drake's set that exclusively included hitters. Pitchers were added in 1985.

Thank you for joining me for Joy of a Boxed Set. I'll try to replace these photos with scans if I get a chance.

Nick said…
That Carew might be my all-time favorite Drake's card. That classic stance didn't get enough airplay on his baseball cards.
April 13, 2019 at 9:05 PM

Funny you should post this today. I noticed a display in the grocery store last night...Drakes Coffee Cakes. I don't pay much attention to snack cakes nowadays so I was surprised that Drakes is still around. Drakes Yankee Doodles were who our post-paper route reward most afternoons back in the day. They were perfect with our 16 oz RCs.
April 14, 2019 at 12:14 AM

Mike the History Teacher said…
I love that Reggie card. That's the image I think of when I think of Reggie Jackson. You can't be sure if he just hit it 425 feet or if he just swung at strike three. (My guess is the latter since he's not looking up and admiring the outcome.)
April 14, 2019 at 12:24 AM

Angus said…
This card set is the one that jumped out at me when you opened the box last weekend. I'm glad you showed it.

gregory said…
Great set! I just finished putting together a 33-card Kay Bee set through trades. Definitely fun. Also, here's the nerdy statement of the day: A drake is a male duck.
April 14, 2019 at 7:14 AM

Fuji said…
Always thought these were distributed in packages of snacks or something. Had no clue they came in boxes. I think the Jackson and Carew are my two favorites from this lot. Both are beautifully cropped. And holy cow... did Reggie have one of the most photogenic swings off all-time or what?
April 14, 2019 at 10:29 AM

AdamE said…
I grew up in that era and I never heard of Drake's. (Outside of the cards I have received over the years) Maybe they are regional. Then again my mom didn't allow much sweets in the house so maybe it was there all along and I just didn't know.
April 15, 2019 at 12:19 PM