April 25, 2019
(I am posting this during the time of the NFL Draft, which probably isn't a wise programming move. Even though we will play up this event in the newspaper, I still can't figure out why people get so excited about the draft. It is bizarre that fans set aside time to watch people sit around and make picks. But then second-guessing has become a full-time online industry so I suppose it makes sense. This is Cardboard Appreciation and this is the 281st in a series): 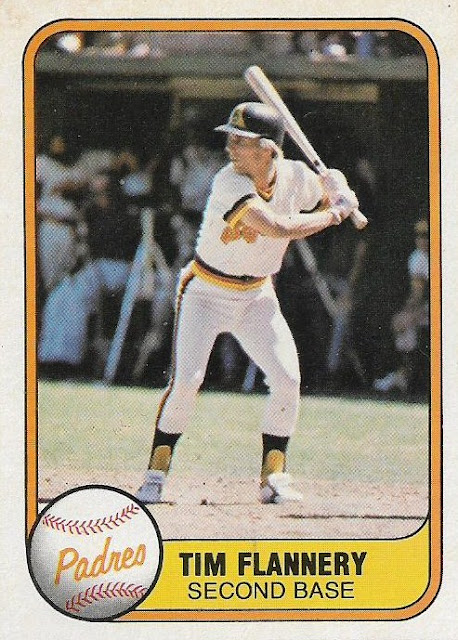 I'm sure many of you have seen the Yahoo series "Old Baseball Cards," hosted by Mike Oz, on youtube or maybe on the Yahoo Sports site.

It's an interesting few minutes of Oz and a notable baseball player or manager opening packs of baseball cards from the '80s or '90s and then they trade some cards. You aren't going to learn a lot about cards -- I sometimes get annoyed by how little the player and Oz know about the packs and the cards they're opening, but then they don't run a baseball card blog. But often the players offer interesting nuggets about past teammates, opponents, etc.

First of all, Rose opened five different packs during the video. Most players open just one and sometimes you can tell they want to get out of there. Rose wasn't in any hurry (still in the business of shilling himself) and they opened packs of '81 Fleer, '83 Topps, '86 Topps, '85 Donruss and '82 Fleer. He knew many of the players and he had factoids and stories about a lot of them.

The thing that impressed me most is that I learned something about a baseball card from Pete Rose.

Rose selected 1981 Fleer as the pack he wanted to open first, an excellent choice. (Oz picked 1983 Topps, another excellent choice). He had stuff to say about Tommy John, Willie Wilson, Jerry Koosman, Larry Herndon, Jeff Leonard, Hal McRae and even Julio Gonzalez. He also told a story about Davey Concepcion getting stuck in an operating dryer.

Then he pulled the card of Tim Flannery. But it wasn't the card shown at the top of this post. This was the card: 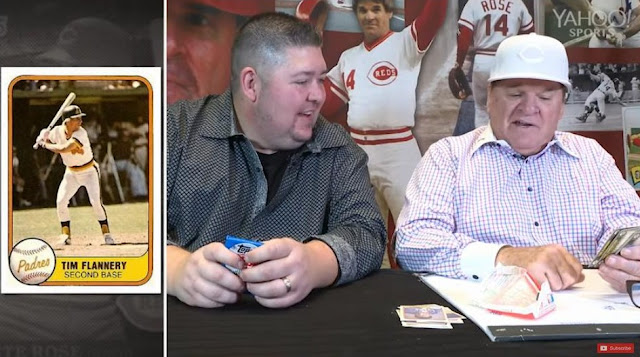 The image of Flannery on the card is reversed, which Rose caught right away. "I don't know what Flannery's doing with that right-handed stance, he was a left-hander," he said.

Oz didn't know anything about it, but checked the back, where Flannery was listed as a lefty and then checked the background and noted that the image was reversed as the lettering on the uniforms was backwards.

That's when I discovered that the error had been corrected and there were two versions of the card. I have the corrected version. Rats.

Rose later blew away Oz with detailed information on a three-home run game off of Nino Espinosa, and that Randy Moffitt is Billie Jean King's brother (come on, Mike, every baseball card collector should know that).

I don't know if this was the best "Old Baseball Cards" episode. I just watched the one with Dave Winfield and that was pretty good, too. The Craig Counsell and Dusty Baker ones were great. (Also, Rays manager Kevin Cash has an impressive card collection). I've noticed that in the more recent episodes, the guests have gotten more into the spirit of the show.

But for a player to teach me something about a baseball card, that just doesn't happen very often.

Old Cards said…
Reading your post is far more interesting than watching the NFL draft. I'm not an over zealous Pete Rose fan, but I like him. He added a lot of interest to the game. The 1981 Fleer, in my opinion, is the best Fleer issue, but once you get past 81, cards are too plentiful and too repetitive to be appealing.
April 25, 2019 at 7:58 PM

Jason T. Carter said…
I love this series of videos. I have spent way too much time binging (bingeing? binge-ing?) them.

Big Tone said…
The Lee Smith error card with the reversed cubs logo on the back always stands out to me when I think about 81 Fleer.
April 26, 2019 at 8:27 AM

Fuji said…
I know there are people who will never forgive Pete, but when it came to playing the game there are few who played it harder. I vaguely remember someone telling me (or maybe I saw it on a video too) that he was very knowledgable about the game as well. Your post just confirms it. I understand memorizing which handed our favorite players batted... or even the biggest names in the game. But it takes a big time baseball guy to memorize that Tim Flannery was a left-handed hitter. Okay... I'm off to go watch that video and see what else Pete knew about his colleagues...
April 26, 2019 at 10:11 AM

AdamE said…
Even worse than watchting the draft on TV is the thousands of people that go to the live event to watch. I didn't watch the draft on tv but I heard that it was raining in Nashville and thousands not only stood outside to "be part of the draft" but they did it in the rain. (I did keep checking in on the draft until the Steelers picked, but I didn't watch)
April 26, 2019 at 12:28 PM

gregory said…
Good episode! I could have listened to Pete Rose talk about baseball for another couple of hours.
April 26, 2019 at 12:54 PM