There are no crystal balls at card shows 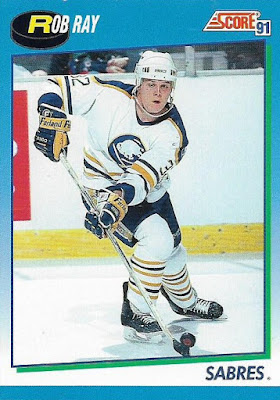 A card show is about as perfect an experience as I have in my life. Virtually nothing goes wrong during a show and happy bunnies dance overhead during my entire stay.

I suppose something could go wrong. Perhaps you unexpectedly spot an expensive item you've been wanting for years and don't have the money for it. Maybe somebody buys a card right before you were going to buy it.

But, in short, just about my only concern at a card show is that I will buy cards that I have already.

It happens almost every time. Fortunately, it almost always involves little discount box purchases that don't amount to much cash. I'm on guard for this regular occurrence at shows and brace myself for it. But what I never of think of at shows is "what cards are on their way to me while I'm at this show?"

We "trade-through-the-mail" collectors think we're so smart, but sometimes that can backfire.

One of the items that I bought at the card show a couple weeks ago was a bunch of Dodgers from this year's Heritage set. 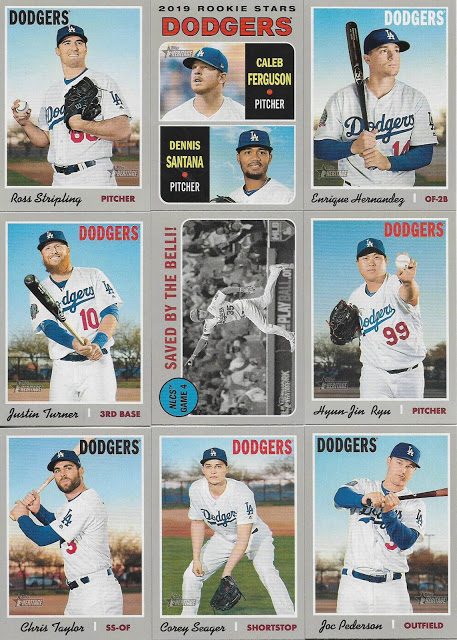 I like taking care of modern-card wants like this at shows. It's very efficient. It prevents me from buying too many retail packs. I mentally pat myself on the back for making a purchase like this.

However, if there was a crystal ball at the card show, I would know not to buy any of these cards and that buying them would be a waste of money.

That's because en route to my abode at that very moment of purchase (well, maybe not that exact moment, I think the postal service takes Sundays off) was this: 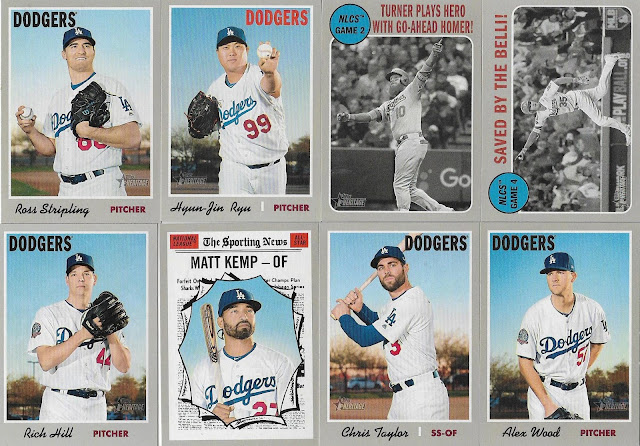 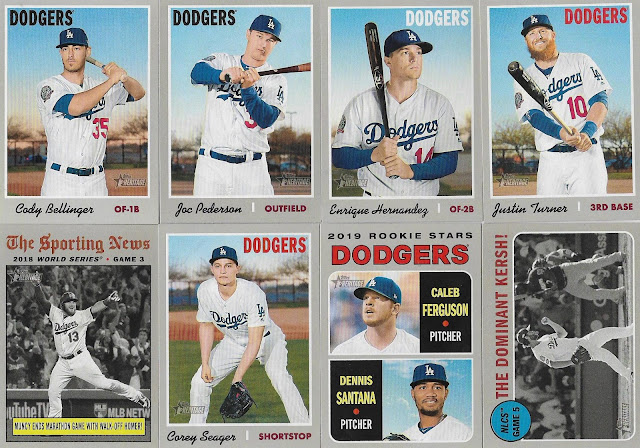 These were sent to me by Doug of Sportscards from the Dollar Store. It almost makes me want to try to complete the 2019 Heritage set just to have a use for these, but I'm not going to do that.

I guess if I wanted to avoid scenarios like this, I'd avoid buying any current-year cards because the chances are greater that they'll come your way than cards from other years. But that kind of efficiency is just not going to happen in my favorite hobby.

At best these cards are trade bait or will find their way to other collections (that Muncy card is the night cardiest of night cards, probably the deepest into the night a card photo has ever been taken). But really I don't mind seeing a bunch of Heritage Dodgers a second or third time. The postseason cards are always fun.

Of course, Doug is too much of a quality collector to send me just a bunch of dupes. And even his dupes show he's paying attention. 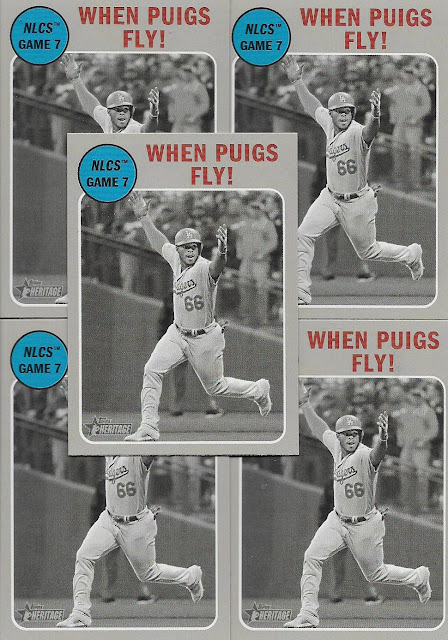 So far, this is my favorite card of 2019. I've mentioned that I wouldn't mind accumulating a number of these. Doug has given me a terrific head start. 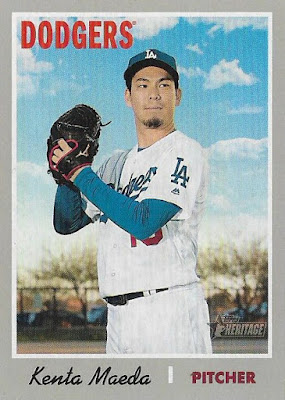 He also helped me knock out one of the high-number Dodger cards with Kenta Maeda here. With the Heritage Maeda and Kershaw already in my collections I should be done with the Dodger high numbers. But Topps thinks five Dodgers in the high number portion of the set is perfectly logical so I'll be trying to complete the 2019 team set for a bit longer, thank you very much lone baseball card licensee. 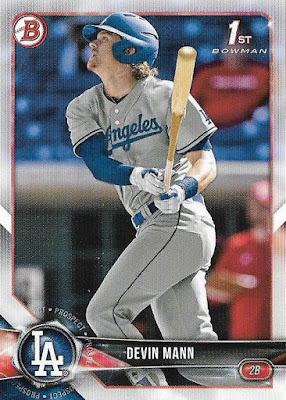 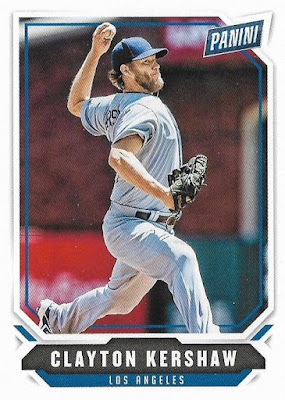 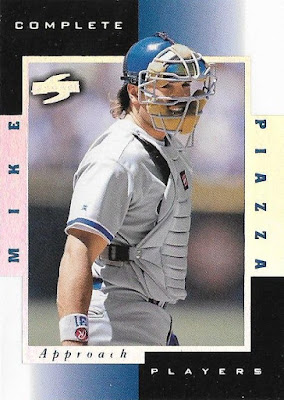 Some non-2019 Dodgers that I need. Updating my Mike Piazza card collection is as tedious as any of the other '90s Dodgers with way too many cards, but he's got so many snazzy ones.

The Kershaw card is yet another one of those Father's Day Panini issues, I think Kershaw appears on them every year and they instantly become the most boring Kershaw cards ever made.

The Bowman Draft card reminds me that I never posted a Dodger list for last year's Bowman draft (or probably 2016 or 2017) and have no idea who is in it. 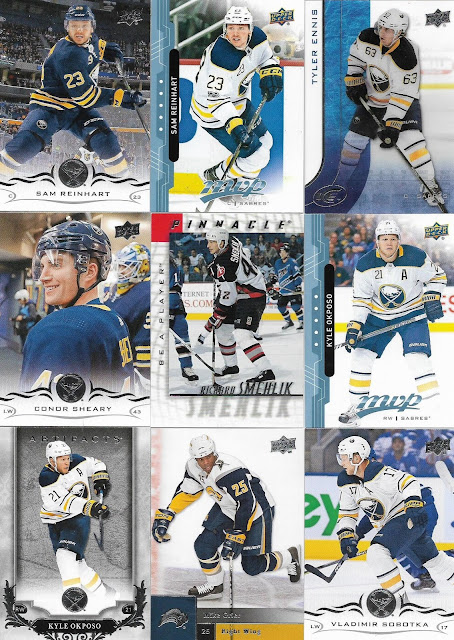 Doug also sent a host of Sabres cards. My Sabres collection has suddenly lost its appeal after Buffalo found a way to squander all that November excitement and NOT EVEN MAKE THE PLAYOFFS.

I am not one of those people who think Phil Housley should have been fired. The Sabres did improve this season. But, geez, how the heck do you miss the postseason with that start? 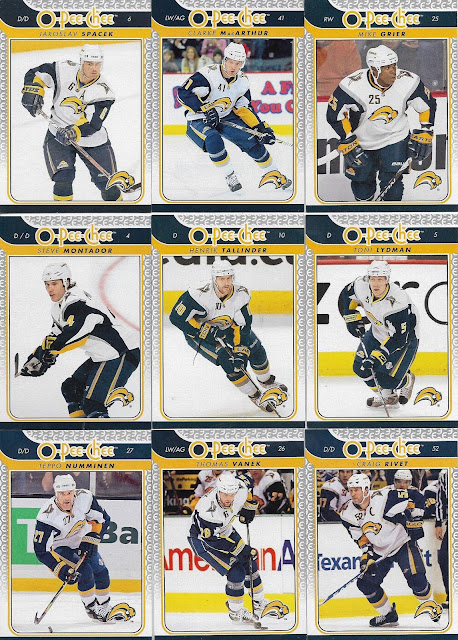 Some rookies from when these guys were rookies (and Sabres). 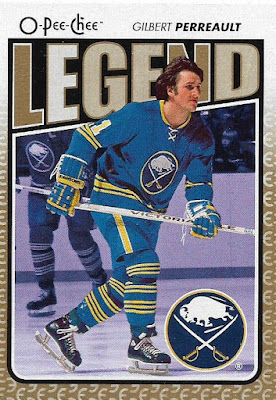 And always good to get a Gil Perreault card.

Thanks for all the cards, Doug. I guess timing is everything, even in sending card packages.

Commishbob said…
That batch of Sabres cards proves something I've always believed...their original blue/yellow look, with the swords and buffalo, is classic and they should never go away from it.
April 22, 2019 at 8:08 PM

acrackedbat said…
Sabre Legend is a right-on design! It's new to me anyway, making me want cards I don't need and have no room for. I see another Piazza I don't have, which happens often here, in your space.
April 22, 2019 at 8:22 PM