As this is published, the Buffalo Sabres are either en route to their ninth straight victory or their first loss since Nov. 4th.

I'm not used to this kind of success for my favorite hockey team. I don't follow hockey as much as I did in the 1990s and part of the reason for that is because the Sabres -- except for that red-and-black blip in the late '90s -- have been consistently mediocre-to-bad for years. They haven't made the playoffs the last seven seasons.

During the 1970s and '80s, the Sabres were consistent contenders. I didn't really collect hockey but I knew who the players were. Then the Sabres and I gradually went our separate ways until the point that if you told me Richard Smehlik was still on the team, that would totally make sense (FYI: Smehlik is 48 years old and retired in 2003).

This Sabres' win streak has convinced me to start paying attention to the team again. Yes, I'm a fair weather hockey fan. Sorry not sorry. I have a full-time job following my Dodgers. A few days ago, I sat down to watch the Sabres play the Penguins. Pittsburgh took a 4-1 lead after two periods and this just reminded me of all those other Sabre years. Then Buffalo tied the game and won in overtime! Holy crap. Then they crushed the Flyers. Yikes. Then they beat the Canadiens in overtime. OK, OK, I'll get some hockey cards!!

I'm off to a good start because I received a Zippy Zapping recently from Torren Up Cards. And it was full of Sabres, both card and sticker variety. 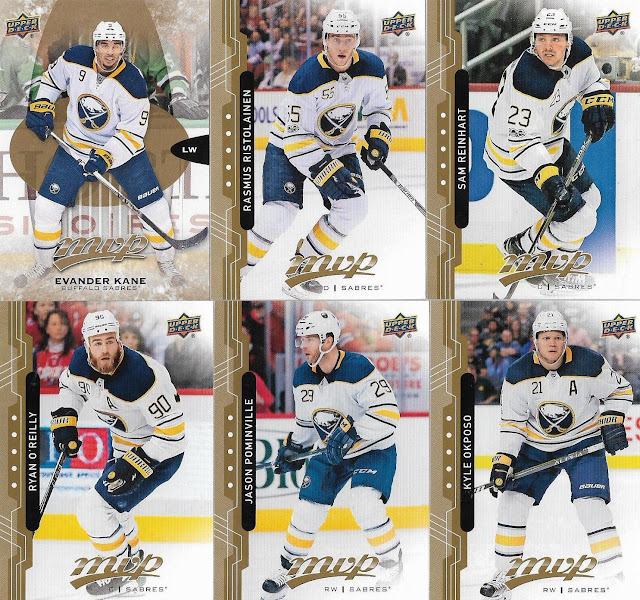 I actually know all these guys! And they're like good and stuff!

As I reacquaint myself with hockey cards, I'm not impressed with Upper Deck. Upper Deck's style is just not mine. It leaves me cold (Ha! Get it? OK, never mind). 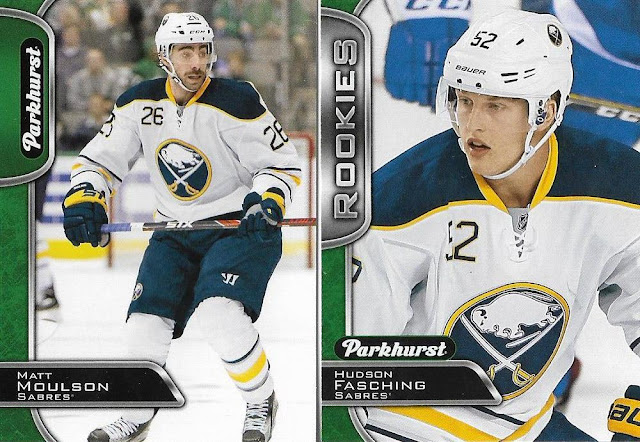 Two cards from this year's Parkhurst set, which is also produced by Upper Deck. Again, not feeling it.

I already know I'm an O-Pee-Chee guy when it comes to hockey. It features an old-school look that should still be in effect (what do modern card-designers have against colorful sets?). Hockey photos are already two-thirds white ice, throw a bunch of color on the borders! 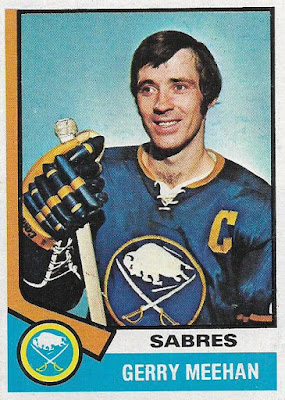 ZZ also sent this super-sharp 1974-75 Topps card of former Sabres captain Gerry Meehan. The 74-75 design looks ancient -- like something out of the 1960s -- but, man, were the Sabres good then. Stoopid, evul Flyers.

The combination of these Sabres cards and the team doing so well prompted me to put some sort of order into my Sabres cards. What a disaster they've been. Stacks of cards in the basement and then others stuffed into an all-inclusive binder that features my 1977 Topps football set build, random football cards, random hockey cards, random tennis cards, cards of people I've interviewed. Come on, the Sabres have won at least eight in a row! Get some order!

So I took out all of my Sabres cards from the binder, found the hockey cards in the basement and sorted them all. This is no minor feat, because I am not familiar with most hockey brands and the '90s were just as insane in hockey as they were in baseball. Plus half of hockey sets are referenced by calendar year and the other half referenced by seasonal year (2018-19), which is confusing as heck when you haven't collected hockey cards for two decades.

I am in need of some extra binders, so the sorted cards went into a box. But it feels good to have them in order.

I also separated out my Bills cards to do the same thing. But I can wait on that. The Bills are a miserable team who think they don't need a quarterback to win games. So they can stew a bit. 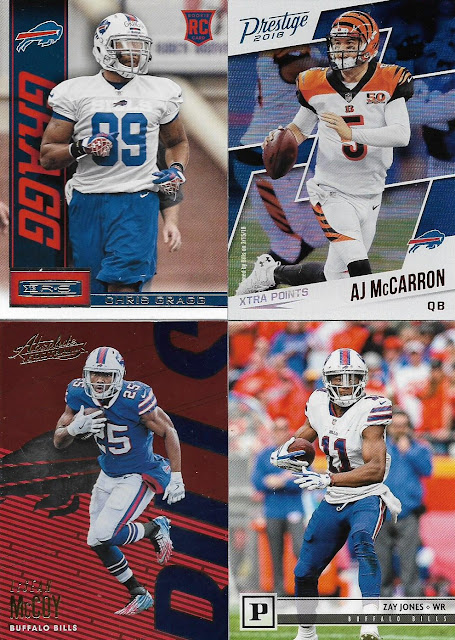 But ZZ sent some Bills cards, too, to assist when I do feel like sorting them. I had no idea that he collected football cards. 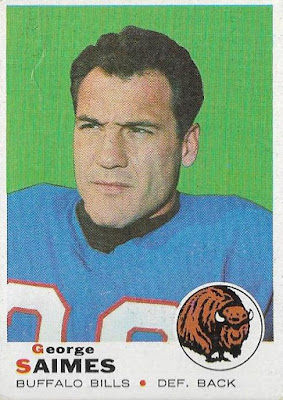 What the heck? A Bills card from the '60s? This is some Zippy Zapping. 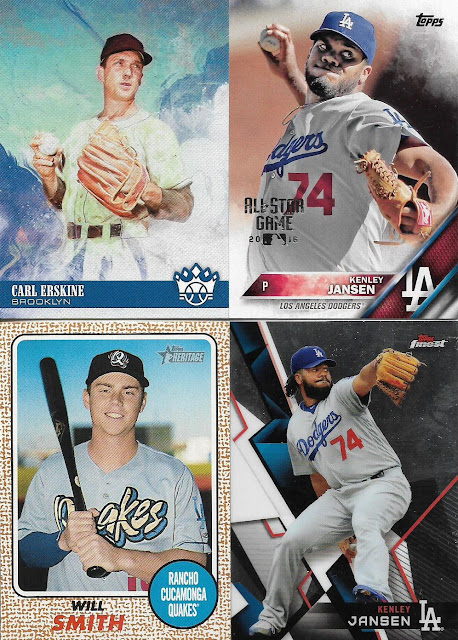 As for the baseball cards in the Zapping, these four survived the "Have It, Have It, Need It" ritual. It is not a fledgling collection when it comes to baseball.

I won't collect hockey like I do baseball. I'll probably be interested in modern Sabres from current sets, especially anything OPC. And I'll probably focus on some key Sabres cards from around the 1999-2000 era, as well as anything from 1991-92 Pro Set.

This will be a just-for-fun side-project as I hopefully watch the Sabres handle teams that have given them issues for years, like the Penguins and Bruins and other detestable meanies.

There's also room for cards like this, also from ZZ: 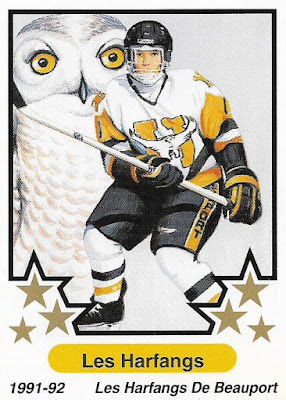 A card with a looming 6-foot owl!

This card features a player from the former Quebec Major Junior Hockey League team, the Beauport Harfangs (Snow Owls). It's already one of my favorite hockey cards.

Chris said…
For a second I thought "Les Harfangs" was the player's name.

John Bateman said…
I think the first hockey card I ever saw was a 1972-73 Topps Don Luce. My first memory is opening a 1972-73 pack I got from my Uncle's store. I am almost positive it was a Sabre who was looking to his right on the card and his stick in his left hand. Luce is only Sabre that fits the bill.
November 24, 2018 at 8:28 PM

Billy Kingsley said…
That playoff draught will end this year...I am watching them right now, as I type this, beat up (literally, they are fighting right now) on the Red Wings.
November 24, 2018 at 9:37 PM

Zippy Zappy said…
Glad you got a kick out of the Sabres now than you might've in years past. They just beat the Red Wings (which I kind of saw coming because Detroit is legitimately bad and even worse than my Rangers). The Sabres have to face the Sharks and Lightning now though, both bonafide contenders. I think those will be true tests for the Sabres to see if they're real or not.
November 24, 2018 at 10:15 PM

Fuji said…
Considering it's impossible finding any Dodgers you need laying around my place... it's good to know that I can send you some Sabres instead. Look forward to seeing the Sharks face off against your team. They've been so unpredictable this season... but I feel like they're going to get things rolling sooner or later.
November 24, 2018 at 11:47 PM

The Shlabotnik Report said…
I sometimes watch NCAA Hockey on one of the cable networks, and a couple of years ago a Boston University player caught my eye... That guy was Jack Eichel, who is now my favorite current hockey player; however, given that the NHL is largely dead to me - I didn't realize that the Sabres were playing well until I saw one of your tweets - "favorite current hockey player" means that I made an modest effort to find a card of his on COMC.

The Snorting Bull said…
I miss Jeff Skinner in Raleigh. Any chance the Sabres send him back?
November 25, 2018 at 9:52 AM

Jafronius said…
The Sabres were my team when my college roommate wanted to play NHL97 on the old Playstation...Because of Miroslav Satan. I mean, there was a guy named Satan skating around?
November 26, 2018 at 3:59 AM

Hackenbush said…
The Owl card is cool. Congrats on the Sabres resurrence. My team, the Blackhawks, are in major decline. Not sure how they're going to turn it around. It was a good run though.
November 26, 2018 at 5:58 PM