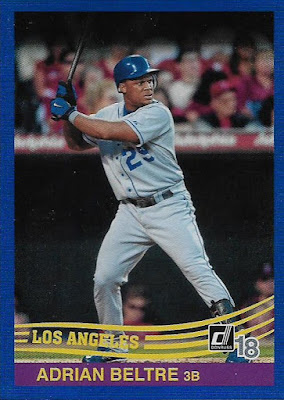 This is the last card of Adrian Beltre that I acquired before he announced his retirement.

Is it any wonder he retired?

Beltre is one of the select few greatest talents I have ever seen on a baseball field. He's on the short list that includes Rickey Henderson, Gary Sheffield and Dwight Gooden. There's a reason the Dodgers signed him as a 15-year-old and he was the youngest player in the majors in 1999.

That's why it's extra painful that Beltre will go into the Hall of Fame as a Texas Ranger. Until this past season, Beltre had spent equal time -- seven seasons each -- with the Dodgers and the Rangers. He is another player the Dodgers should have never let go. Right up there with Pedro Martinez and Mike Piazza.

It's painful not only because of the number of third basemen the Dodgers employed between Beltre's departure to the Mariners and current corner man Justin Turner. It's painful because Beltre was a genuine pleasure to watch and to cover, not just because of his awesome talent but because of his whimsical personality and all of those stories about ghosts and refusing to wear a cup and going after anyone who touches his head (don't touch his head!)

That was a great deal of fun during his Dodger days. But Beltre loosened up as he got older and better examples of his personality were displayed while he was with the Rangers.

The problem is I have like 7 cards of Beltre as a Ranger. I have close to 300 of him as a Dodger.

If I'm doing a proper tribute on a card blog, there's no question I need to show my favorite Dodger Adiran Beltre cards. A base card from 2017 Topps just won't do.

So here are 21 Adrian Beltre cards -- for his 21-year major league career -- in no particular order, to fit the unusual, one-of-a-kind, awe-inspiring, now-retired Beltre. These are a lot better than that Panini card I showed. 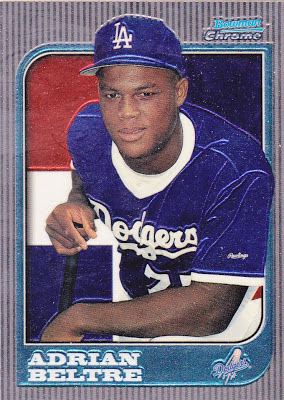 The holy grail of Adrian Beltre rookie cards is Beltre's Bowman Chrome refractor from '97. I ain't got that one. But this is close enough. It's a pretty terrific card of a prospect that everyone knew was going to be a big deal. 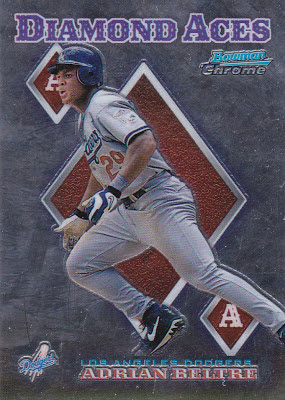 It's interesting how Topps/Bowman treats its superstars. If they're a phenom from the start, they'll get plenty of cards and also plenty of snazzy inserts. This is one. Then, when the player begins to establish himself, the number of inserts and extras goes down. It takes a huge season -- like Beltre had in 2004 -- to draw the attention of the insert-makers. But more on that later. 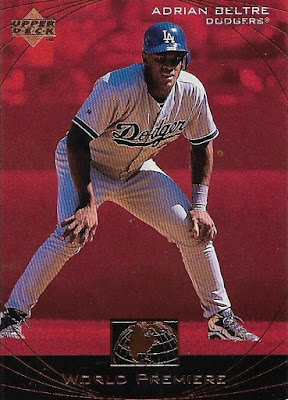 I love the red filter. This was the card era where companies preferred gold and cold, metallic colors, unless you were outrageous like Circa. So cards like this really stand out. 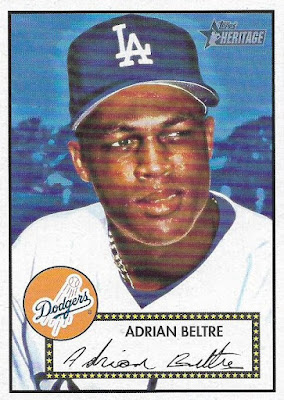 Just a stately and classy card. Beltre looked remarkably the same throughout his career. I'm not talking about his physique as it's obvious he got bigger. But his face never seemed to change. 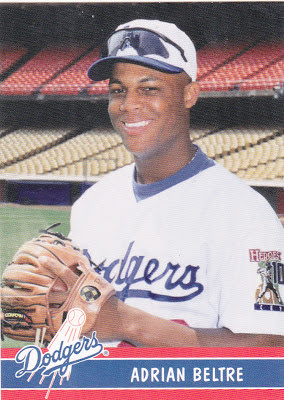 Why would I show those ghastly white Dodgers' caps? Well, because Beltre is also displaying on his upper arm that his hero was Ron Cey! 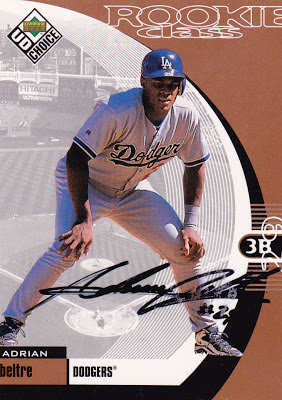 This is my only autographed Adrian Beltre card. It showed up at my house just over a month after I started Night Owl Cards. It was from Dave of Tribe Cards -- the second time he had sent me cards in less than two months of blogging! And it was a freakin' card autographed by Adrian Beltre. Good gawd. 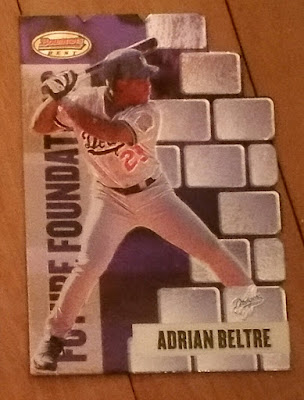 Woooo! Numbered to /3000!! I'm not quite the sucker for diecut cards that '90s card fans are but I do like them quite a bit. The unfortunate thing about cards like these is that neither scanner nor camera can capture how spectacularly shiny this card is. 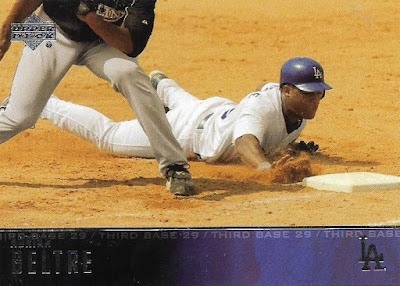 Not counting inserts or relics, there aren't a lot of horizontal Beltre cards in my collection. I don't know why that is, because I bet he could make some awesome horizontal cards. This one isn't bad. 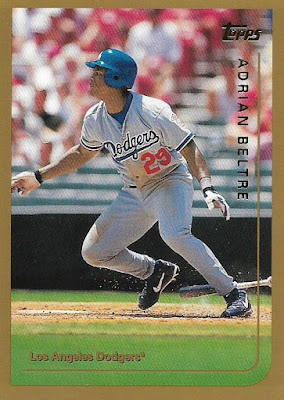 This looks like a plain, ordinary Topps base card. How spoiled are collectors from post-1993? This happens to be Beltre's FIRST Topps base card, something that would make young collectors like me swoon back in the 1970s. This is a special card, if only to me. 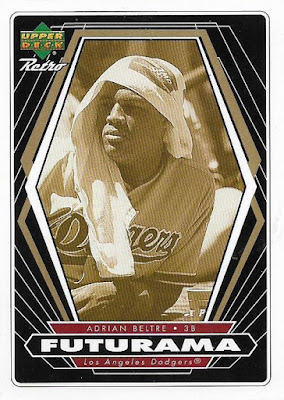 Not even out of his teenage years and we had a glimpse of what Beltre was all about. There may have been no more determined a player out on the field, but he always liked to have fun. 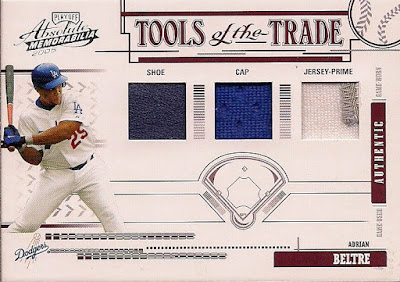 This relic card had to go and top all my other relic cards. It laughed in the face of my Beltre bat card. It scoffed at my Beltre jersey and bat card, it snickered at my shoe, cap and plain-old jersey card. No this card had to play the patch card (although if I'm being honest, some of the other relic cards I just mentioned look nicer than this one). 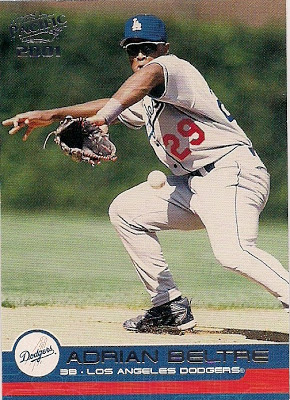 I am naturally awed by great-fielding third basemen. Maybe only right fielders impress me more. I have no doubt that despite the contorted mess Beltre is in, he threw the runner out. 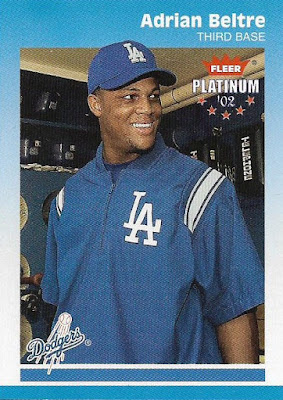 I was excited for a moment because I though this was a photo of Beltre at his locker. Those photos have been few and far between since the 1980s. But it's merely Beltre near the bat rack, which admittedly is still pretty cool. 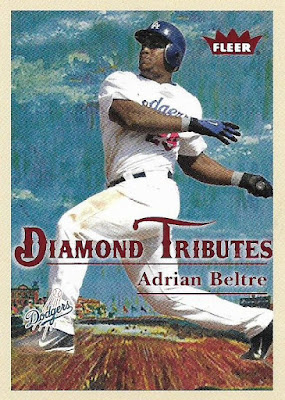 Beltre had shoved off to Seattle by 2005. This was unfortunate, as I mentioned, but also because after Beltre's monster year in 2004, there should have been a full-out assault of Beltre inserts and other odes to the MVP runner-up. Instead, we had some sets showing him as a Dodger, some showing him as a Mariner and some just leaving him out altogether. Sad times. At least Fleer knew what to do. 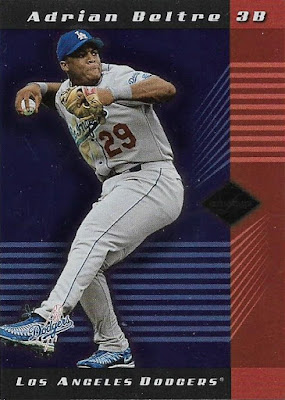 Beltre's throws to first base were quite different. Because his arm was so good, he would barely take a step forward and just use his entire upper body to get it there. I don't know if this picture is a great representation of that, but it sure looks unique to me. 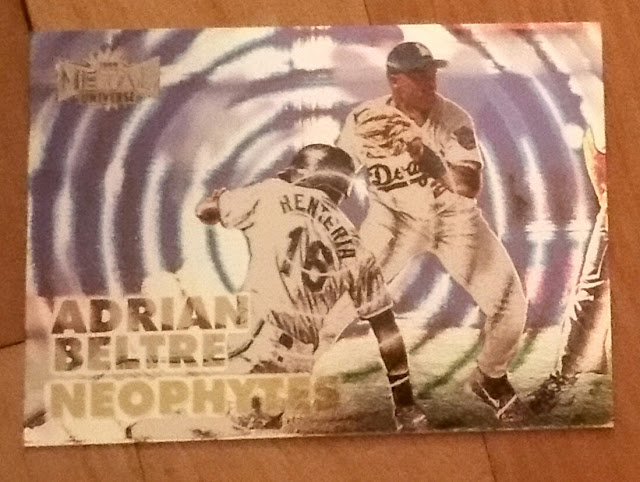 Another card I had to shoot instead of scan. It's really a wild card. And the title is wild, too. Such big words! 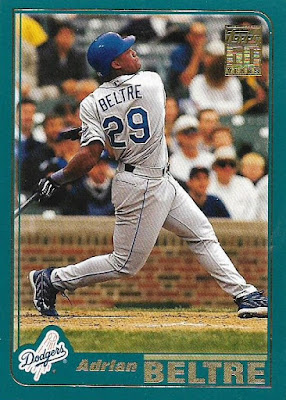 The card I think of when I think of Adrian Beltre cards. It just seems to sum everything up. That prodigious swing. All that power is captured in that photo. Beltre looked intimidating. That's a fact. I can see why people might be afraid to approach him, but really it was all show. 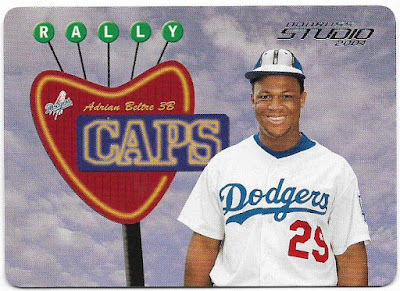 Finally, a card that lets Beltre's personality shine. I love this. I love the way Beltre played. He was goofy without letting it overwhelm him. Thanks, Adrian. 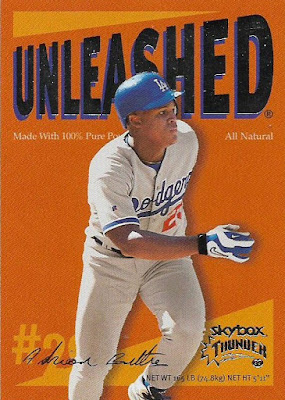 I wouldn't wish Skybox's prose on anyone. But this is an outstanding insert. Adrian Beltre is bolting off the front of a cereal box! Plus, the audacity of Skybox writing "All Natural" in the middle of the steroid era. Yikes! 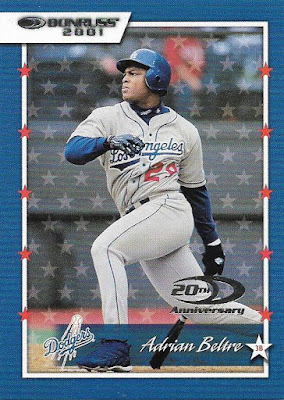 What a card. Makes me want to stand up for the Pledge of Allegiance. 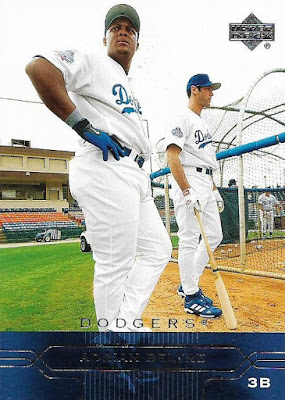 Because Beltre wasn't even 30 when he left the Dodgers, there aren't many "regal" cards of him, in which he looks like the experienced titan of the diamond. I like this one because the photo does revere the guy and also because it shows him next to another Dodger power guy at the time, Shawn Green.


So, those are 21 of my favorite Adrian Beltre cards. There are a lot more that I like -- I know because I pulled more than that. But overall, I think he deserved even better cards. Players of his era, like Pujols and Ichiro, received a lot more card love. But I'd put Beltre up with them in terms of talent.

And as far as being a gentleman and a fantastic teammate? I don't think anyone is comparable.

P-town Tom said…
I could watch Beltre highlights (and his antics) all day long. One of my more recent favorites is when he moved the on deck circle by an umpire on a power trip.
November 20, 2018 at 10:27 PM

BaseSetCalling said…
So glad the Tributes card ended up in the right place - with all the other bestest Beltre cards.
November 20, 2018 at 10:45 PM

Fuji said…
Cinderella was right. You don't know what you've got till it's gone. He had such an amazing career... and was so entertaining. I'm truly going to miss seeing the highlight reels of Andrus messing with him. Great selection of cards. That 2001 Heritage is pretty amazing.
November 21, 2018 at 10:20 AM

Defenders50 said…
I honestly hoped he would keep going, Bartolo Colon-style, well into his 40s. He seemed like so much fun. You know you've had a career when you appeared on licensed Pacific products!
November 21, 2018 at 1:06 PM