I have waited for this card for a long time 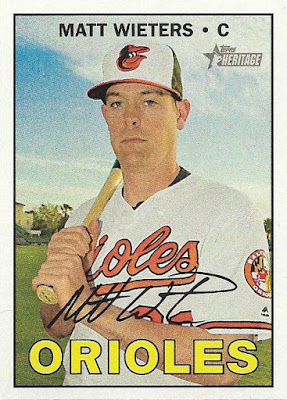 The Orioles do not appear on my radar that often. They are my youngest brother's favorite team, so I suppose they're not as ignored as the Rays or Twins. But since they are an American League team with no real ability to offend me, I pay little attention to them.

I definitely do not build my collection around them.

However, I have waited for the above card for a long, long time.

As a set collector at heart, I am fascinated by the notable players who were not included in Topps sets because the two sides didn't have a deal. I've mentioned many of them before -- Maury Wills, Jason Varitek, Barry Bonds, Alex Rodriguez, Rusty Staub, Ichiro. And there are a bunch of others: Kevin McReynolds, Chris Short, Joe Adcock, Tony Horton and many more.

Each of their stories interests me, because since I was a child I have been under the impression that Topps chronicles every player from every year. There are all kinds of flaws with my impression, but it's difficult to shake. When a set is 792 cards, you believe that just about everyone is in the set, certainly the star players. And if a player is not in the set, he's a non-entity. There have been cases back when I was a kid where I didn't know about a player for years, just because I didn't pull his card.

Matt Wieters, more than 2,711 at-bats into his major league career that began in 2009, is appearing on his first Topps cards this year. News broke of Topps signing him to a contract in June. And I believe Wieters has appeared on a ToppsNow card or two already.

But this Heritage High Numbers card is the first Topps Wieters card issued in a traditional pack, as far as I know. Before this point, if you acquired a Wieters card, it was either an early eTopps card or something from Razor (the company Wieters signed with exclusively back in 2008) or Upper Deck or Panini. Just about all of those cards did not have a license with MLB, so Wieters appeared on them without any sign that he was Oriole. No happy bird on the cap, no Orioles script, nothing.

You know what I think of nonlicensed cards, for the most part ... ick. They're not worth having in most cases. So that means Wieters has continued to be a non-entity for me six years into his career.

I know if I was an Orioles fan, this would be the end of a long nightmare.

The least Wieters could do is look a little happier about it.

You're a cardboard somebody now!

Metallattorney said…
As a HUGE fan of Jason Varitek, that always bugged me. I'm just glad they got that whole thing figured out before Upper Deck (and others) lost their MLB license. My Varitek collection stands at 890 cards, it could be well over 1,200 if Topps made cards of him from 1998-2006.
October 19, 2016 at 7:42 PM

Commishbob said…
NO doing an Orioes-centric post! Wonders never cease. Honestly I was happy to see this happen, even if it is more than likely just in time for him to Wieters on. I honestly wasn't aware of the fact that he wasn't in Topps sets until I tried to find a card of him for my fantasy baseball collection. I ended up with an eTopps card which is actually a pretty nifty card.
October 19, 2016 at 10:28 PM

Unknown said…
Huh, had no idea he just finally had a Topps card card until the Heritage Hi Numbers. Glad you landed this one!
October 20, 2016 at 12:17 AM

Scott Crawford said…
To get the pedantry out of the way, before people speculate too much:

Pre-Heritage High Matt Wieters in Topps checklist (not counting Bunt, which he's been in since '12, because JPEGs):

And that's it as far as releases he's actually named on. Has anyone gone through the trouble of checking to see how many cards he's backdoor showed up on in the Topps stuff yet? Plays at the plate, hugging a pitcher, etc.? There's gotta be someone, as there are some Orioles collectors and there also are a lot of pedants in our ranks.

Even beyond the Topps cards (proper or not), there are fewer than 300 unique cards, total, for a guy who's been getting cards since 2005, and who was a pretty hyped prospect. A lot of those cards are autos, numbered, etc., too, so it's gotta pretty tough being a Wieters collector.

Even if I'm not one (I hang onto his cards when I get 'em, but they're few and far between and usually parts of sets I'm building, so I wouldn't call myself a capital C Collector of his stuff), I'm very glad that he'll be in my Heritage High set when Stubby sends it up to me (he broke a case, so he's probably got a couple of Wieters cards).
October 20, 2016 at 1:26 AM

Jeremya1um said…
You would be surprised at the names of star-caliber players missing from Topps sets. I'm working on finishing Varitek's career Topps run (only missing his '06 and sunset card), and one of my readers Richard has made a '07 Topps Wieters Draft Pick card, which I believe I've posted.
October 20, 2016 at 4:51 AM

Bo said…
Danny Jackson, Neal Heaton and Glenn Davis all refused to sign Topps contracts for a while in the early '80s. In Davis's case it was religious objection to their Garbage Pail Kids cards.
October 20, 2016 at 11:01 AM

mr haverkamp said…
Very interesting parallel between Wieters and Wills...no Topps cards in early years of their careers, and then their initial appearance is in a high #'d 1967 (or 1967-tributed set)!
October 20, 2016 at 1:48 PM

Fuji said…
I can't believe it took me over thirty years to figure out that McReynolds doesn't have a Topps card featuring him in a Padres uniform.
October 20, 2016 at 10:27 PM