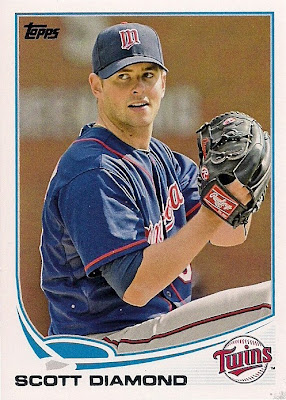 Not much stood out from the Series 2 cards that I bought last week, other than the individual things I mentioned on the earlier post.

But while leafing through those cards that I bought in what will be my only flurry of Series 2 purchasing, I did notice one thing that reminded me that I have noticed it before.

It has something to do with this:

A lot of sameness on the pitcher's mound.

This has been going on for a few years now. After the mid-2000s, in which there were a lot of Topps base cards featuring teeny tiny images of players, the sets suddenly adopted a "get you close to the action" philosophy. Super tight shots of pitchers -- and batters -- in action. Lots of grimacing and gaping.

I can appreciate that to a degree. It's just that it gets a little repetitive after seeing it year after year. Or, in the case of the hanger box that I opened, card after card. 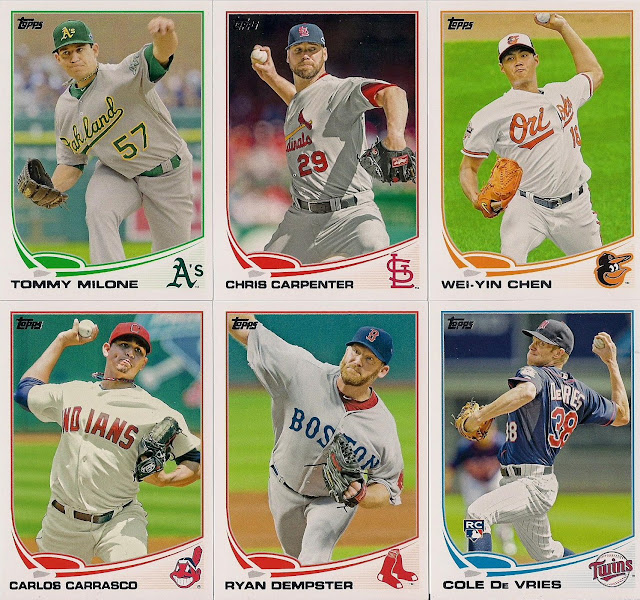 The first row of cards I pulled consecutively. Milone, Carpenter and Chen all at various stages of wind-up.

The second row of cards I pulled consecutively, as well. Carrasco, Dempster and De Vries each propelling a pitch plateward.

I admit I thought "what is going on here?" And seeing the same basic shot repeatedly got a little boring.

But there is a tendency, especially with people of my age, to view every new item as some sort of signal of the decline of civilization. "Back in my day" and all that.

I am super conscious of this, and although I do believe that certain things were better 30 or more years ago, I try not to apply this viewpoint to everything. And I try very much not to do this with cards. I know that there are decent things about cards today. If I bashed on modern cards incessantly, I'd be nothing more than a certain one trick pony that I know (and most of you know, too). I don't want to be like that.

And this is what I saw: 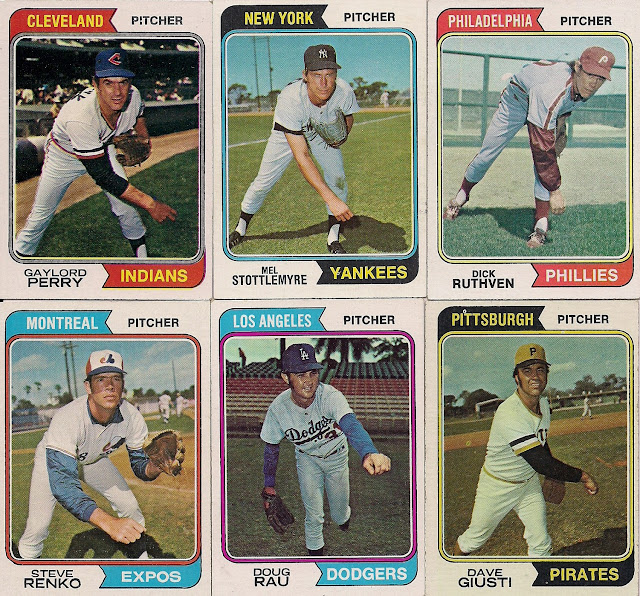 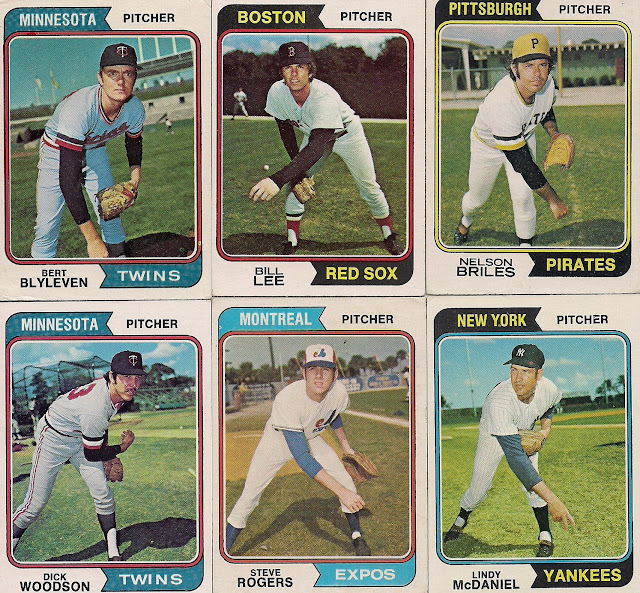 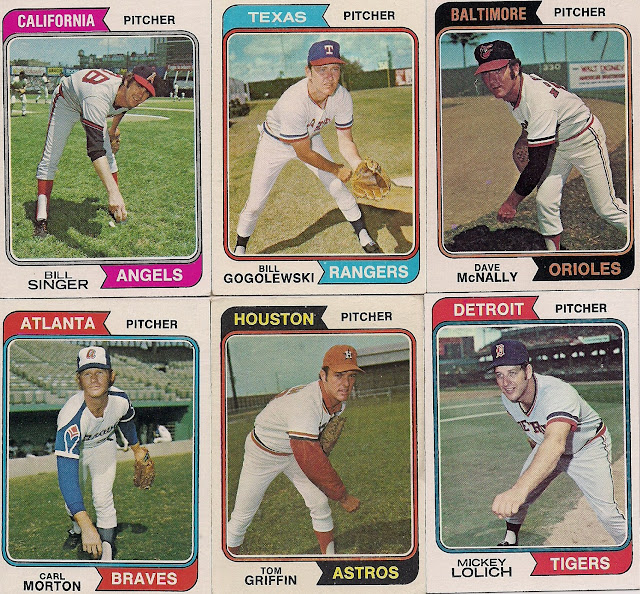 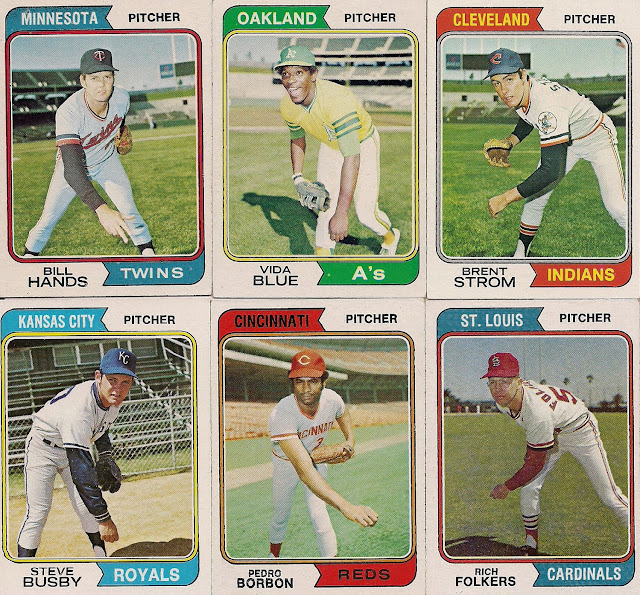 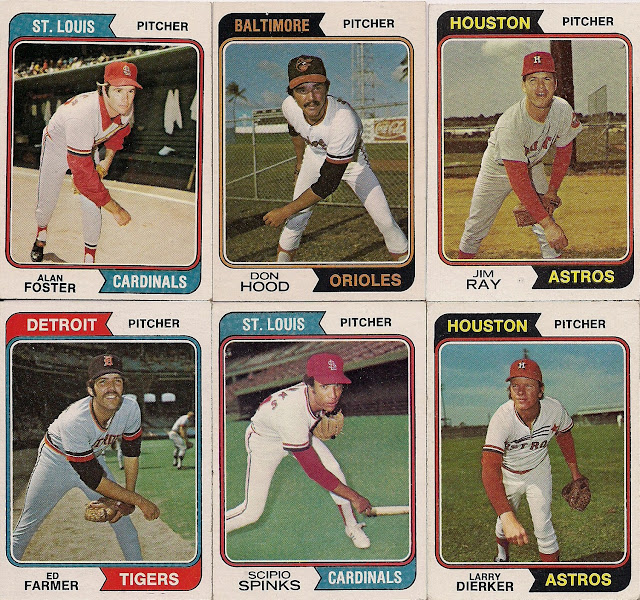 That's not even all of them.

And you know something?

We didn't mind this then.

So why mind it now?

I know I'm a hyper-critical 40-something adult who demands the very best in lots of areas in life. But sometimes, you've just got to put your instincts in check and wonder if every last thing on earth deserves to be analyzed with a critical eye.

Can we let just some things be?

I think we can do that a little bit with cards.

At least I can anyway.

Does that mean I'm going to stop being critical about current cards?

But I am going to pick my battles a little more carefully. 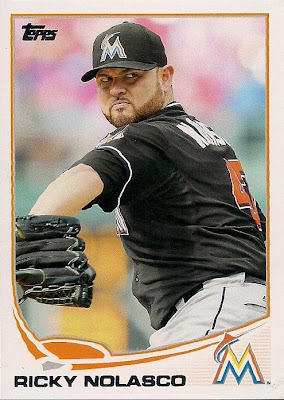 GOGOSOX60 said…
I'll take the posed shots at spring trainiong all the time...thats why the 1985 Topps archives portait shots are down right awesome.

deal said…
Agreed, not a fan of the repetetive shots - but if your making 1000 cards(times about 25 product lines) there will be repeats.

That however makes the pix that are a bit different stand out. regardless Topps still could put a few more of the standout shots into base.

being to tight to the subject also removes some of the interesting factets like stadiums and which teams are playing - random "guests" etc.

petethan said…
I'm with ya. It's all about the cropping. The tight shots have the advantage of letting you get a good look at the player's face. But it tends to reduce the photo's "baseballness." You need to pull back further, especially with pitchers in motion, to get a shot that actually looks like a pitcher pitching, which I think is more interesting than seeing if they have a mole on their lip, or something. But that's just me.

Check out the '86 Leibrandt on my blog today to see how I think it should be done...

Commishbob said…
:::::But there is a tendency, especially with people of my age, to view every new item as some sort of signal of the decline of civilization. "Back in my day" and all that.:::::

Yup, N.O., I plead guilty to being one of those kind of guys at times. I'm guilty of thinking like that too often. I try and catch myself but a lot of it does come though.

Roy-Z said…
There's only so many shots to show of a pitcher. But I noticed as well that many of them were consecutive in packs, which I thought was odd.

Anonymous said…
I wonder if the current batch of sameness has to do with the fact that they're buying photos from Getty Images instead of individual photographers? I'm just speculating on that because a photographer who's taking photos only for Getty might try to get different shots than someone who says "Well, I'll take this type of photo for the news services, and maybe get a couple of others I can sell to Topps or Upper Deck".