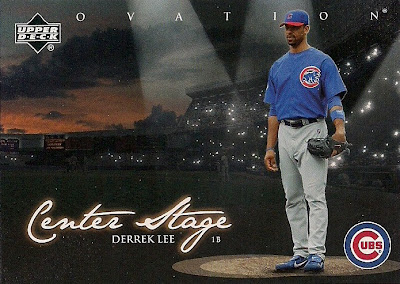 I received a rare night-card only package from William at Foul Bunt the other day. I really enjoyed going through them now that I have my night card binder ready to go. Instantly, I evaluated each one to see if they would be inducted into binderdom.

And instantly I ran into an issue.

This very nice-looking 2006 Ovation card of Derrek Lee demonstrates a recurring problem with frankensets: inserts. How does a fine card like this one go in the binder if it has no number on the back?

This card is "numbered" CS-DL. That's really the fault of the stupid filing system used for this set, not the fault of the frankenset system. But no matter where the blame lies, I still have to figure out whether I'm putting this card in the binder.

While I mull that over, here are a few other cards from William that may or may not make the binder: 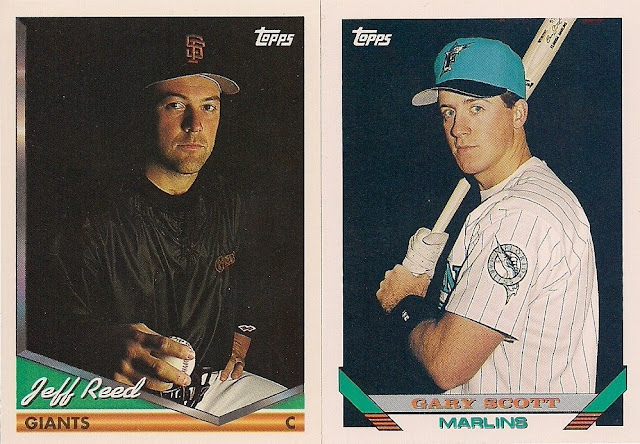 Do they make the binder?

No. I can't be sure that they are night cards. For all I know, a photographer brought the player into some room in the basement of the stadium, set up a dark screen behind him and snapped a picture. It could be a night card, but it also could be a "The Basement Is Dark And Scary" card.

I can't have that on my conscience. 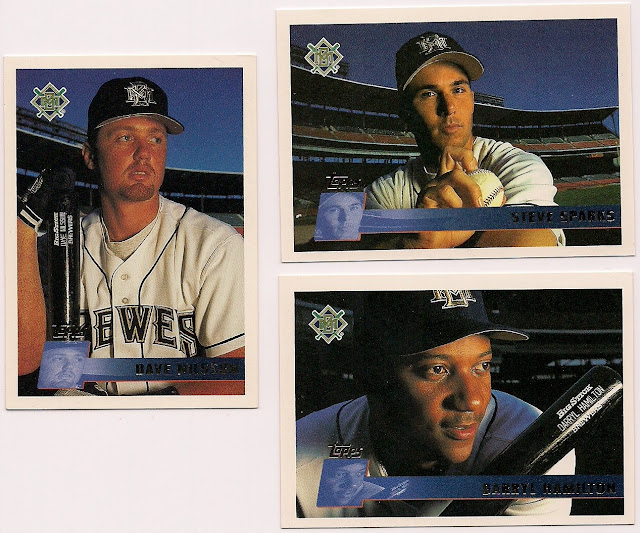 Do they make the binder?

No. It looks like these Brewers three are posing in the late afternoon, perhaps dusk. Dusk cards are cool and all, but they're not night cards.

Never fear though. I welcome all mid-1990s cards because I have so few of them. They will go in with my woefully incomplete '96 set, just as the previous two cards will bolster my feeble 1993 and 1994 sets. 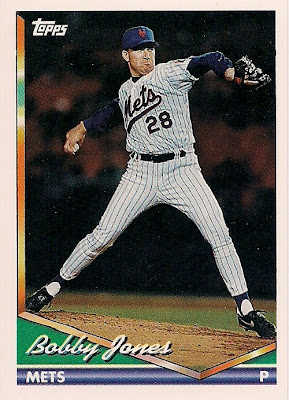 Does it make the binder?

You bet. I have this card already and have been waiting for the right moment to show it as an Awesome Night Card. Well, today is the right moment. Not only do I have a double now and can safely put one in the binder and one with my 1994 set, but today is also Bobby Jones' birthday!

Jones is one of those interesting pitchers who had a handful of decent seasons and then disappeared forever. "We Hardly New Ye" Players like Jones or Jeff D'Amico fascinate me.

Don't worry, I'm not starting another collection. I have plenty.

And that brings me back to this card.

Does it make the binder?

Yeah, I think it does. I'm going to have to create a spot in the back for a page or two of inserts. Inserts are here to stay, you can't ignore them.

They just look too cool.

Night Card Binder candidate: Bobby Jones, 1994 Topps, #539
Does it make the binder?: Yes. And save me some birthday cake.

Bo said…
Bobby Jones and Jeff D'Amico both had namesakes who pitched at the same time as they did but had shorter careers. We knew them even less...
February 10, 2013 at 10:22 PM