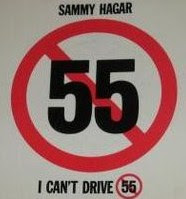 One of my stupid "you can't keep everything" moments was when I slipped all of my 45s* out of their protective sleeves, stacked them in a box for easy storage, and chucked all the sleeves.

Those sleeves were ART. I threw out ART.

I hate it when I'm in Throw Away Mode.

Anyway, one of my most favorite record sleeves was for Sammy Hagar's song "I Can't Drive 55." You see the image of it here. It's so simplistic. So direct. So in your face. I love it.

It also amuses me that the song came about after Hagar was stopped going 62 miles an hour on a north country road headed to Lake Placid. I'm somewhat familiar with the state troopers in the north country.

Of course, now the speed limit is 65 in New York state and the song is hopelessly out-of-date. But the sentiment of the song still works, and for my purposes with Dodger uniform numbers, it works, too. I think.

I associate the No. 55 with a single Dodger. Orel Hershiser. He's a New York state-born guy, just like me. 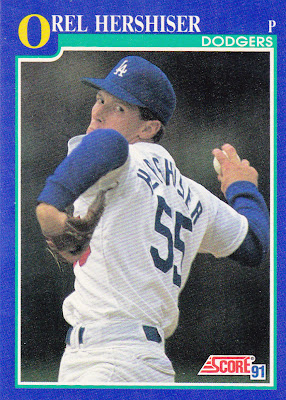 Hershiser wore No. 55 from the time he came up with the Dodgers in 1983 until he departed after the 1994 season (he also wore No. 55 for the Indians and Mets and again when he returned to the Dodgers in 2000. Fortunately, he wore a different number when he was with the Giants. Good thinking, Orel).

For me, Hershiser was the only Dodger who could drive 55.

Up until that point, the No. 55 appeared sparingly, as numbers that high weren't often in use. A pitcher named Jackie Collum wore No. 55 for Brooklyn and Los Angeles in 1957 and 1958. 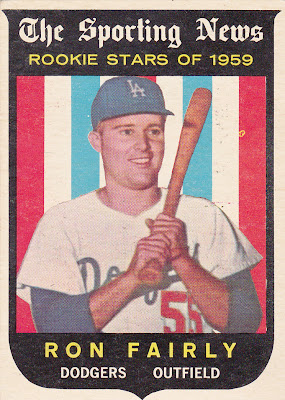 A young Ron Fairly wore the number briefly in 1958. He would later switch to the No. 8, then the No. 44, before settling on No. 6 during the rest of his Dodger career.

But between Fairly in 1958 and Hershiser in 1983, No. 55 only made it onto the field when a backup catcher named Sergio Robles played six games for the Dodgers in 1976. Yeah, I have no idea who he is. He appeared in 16 games total in the majors. 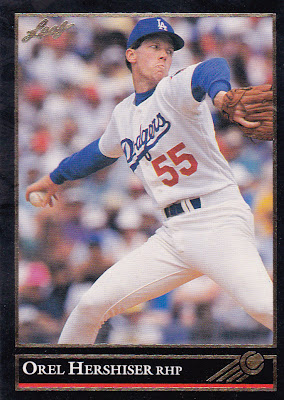 It took Hershiser to make the number cool, even though he was just a prospect and a relief pitcher in 1983.

But he made the double nickel his, finishing third in the Rookie of the Year voting in 1984, third in the Cy Young Award voting in 1985, establishing a record for most consecutive scoreless innings, and leading the Dodgers to a World Series title in 1988, winning Cy Young honors and Series NLCS and MVP awards.

Throughout his 13-year career with the Dodgers, Hershiser became associated with that number.

Yet, when he left as a free agent to play for the Indians, L.A. didn't wait another eight years to give 55 to someone else. 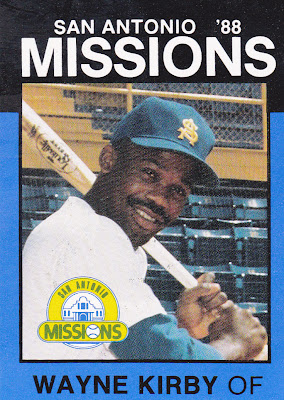 Wayne Kirby, a Dodgers draft choice who came up through the minors before signing with the Indians as a free agent (and coming close to winning Rookie of the Year honors for Cleveland in 1993), was the first to wear the number after Hershiser. 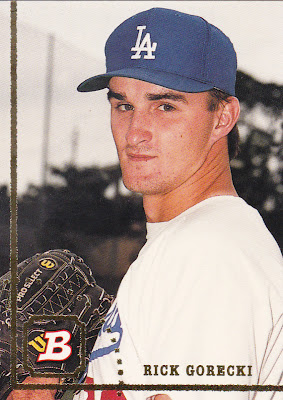 Bowman darling Rick Gorecki assumed the number in 1997. The majority of the Gorecki cards that I have are Bowman, basically because Gorecki pitched in just four games for the Dodgers and seven games total for his career. 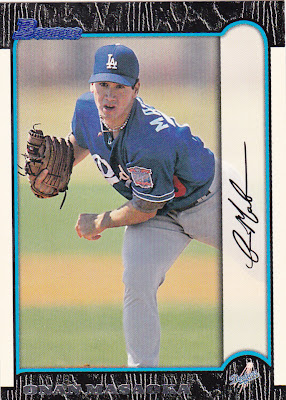 After a year break, No. 55 returned to the mound in 1999 on the back of Hawaiian reliever Onan Masaoka. He appeared in 54 games that year, but relinquished the uniform number to Hershiser in 2000 when Hershiser came back to the Dodgers. It would be Masaoka's final year in the majors. 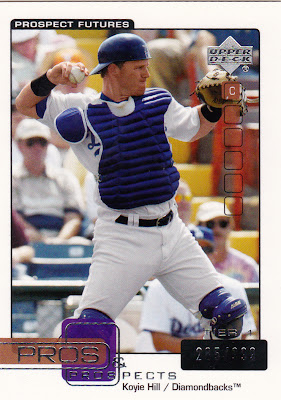 Hershiser had made the number cool, but the players who followed were doing their best to put it back on the shelf. Dodger catcher Koyie Hill wore it briefly in 2003. 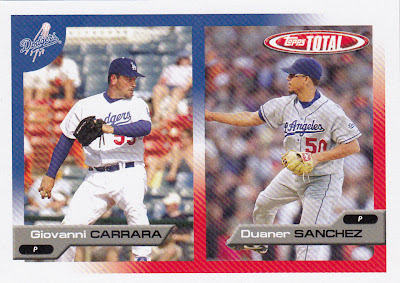 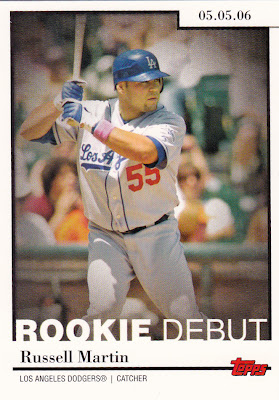 Finally, Russell Martin inherited No. 55 in 2006 and wore it through the 2010 season. To those too young to remember much about Hershiser, No. 55 was Martin's number, as he's the only one besides Bulldog to wear it for at least five years. 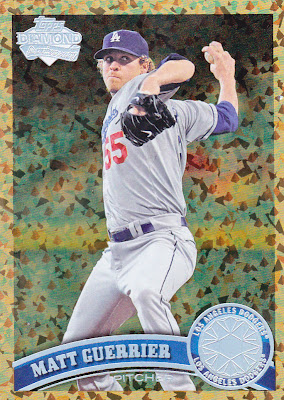 As of now, for me, Hershiser is the only No. 55. Martin had a couple of All-Star years but then fell apart. Word is he's slumming it in a home run friendly park now.

For all the others, this is their lament:

*45s, children, are 45-rotations-per-minute records. Please don't ask me what a record is.

Stealing Home said…
dude - last thursday night i went to the 'mark and brian christmas show'. they're the morning drive time DJ's at our local rock station.
they always have an all-star band - made up of serious rocker all stars - and who else but sammy hagar and chickenfoot played a set.
i got to see your - really one of our - favorite rocker anthems live !! they punched it out, and convinced me why joe satriani was recently named number 8 greatest guitarist ever.
we all sang it for you - I CANT DRIVE FIFTY_ FIIIIIIVE !!
December 20, 2011 at 3:21 AM

All I could think is I wrote and stored several semesters of term papers on those things.
December 20, 2011 at 8:09 AM

It's sad when technology has advanced so much in our lifetime that we actually have to explain things such as that to our youth.

Mark Aubrey said…
Please don't ask me what a record is.