Every card collector has to grow up 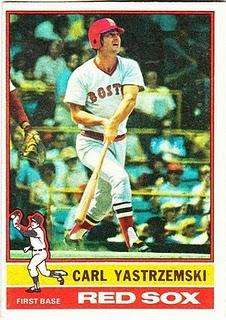 I am relieved to report that the 1976 Topps Carl Yastrzemski left the other '70s Yazzes in his dust during the just completed poll.

Twenty-two votes went to what will now be known as the best Carl Yastrzemski card of the 1970s. Forty-five total votes were cast, which is a respectable number. I guess. For a non-chick poll, anyway. 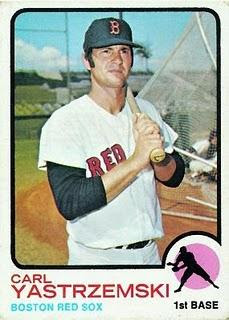 I don't fully understand the interest in this Yaz. But the 1973 card brought in seven votes. 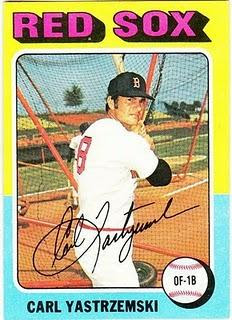 The 1975 Yaz finished third with four votes.
Meanwhile, the '76 Yastrzemski has taken its place on the sidebar with the other "Best of" selections. As always, thanks for voting.
Now, I've mentioned how much certain Yaz cards mean to me, like the '76 and '78 cards. (The 1980 card is very cool, too. I agree). But there's another Yaz card that marked a key moment in my development as a card collector. 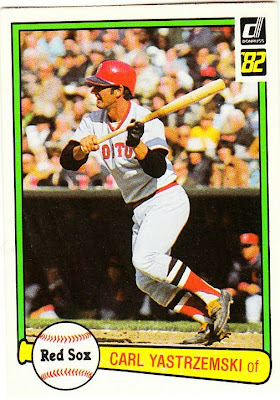 It is the 1982 Donruss card. I pulled this card when I was 16 years old. Sixteen-year-olds grew up a lot more slowly than they do now. So I hope you won't snicker too loudly when I say that this card was my first indication that card companies may not always use a current photo on their cards.
This is common knowledge to us savvy collectors. We can cite numerous examples from the 1960s all the way to present day Topps and Upper Deck. And, oh, do we hate it. But for the first eight years of my collecting life, I thought all of the photos were as current as Casey Kasem's Top 40. Why would anyone use an OLD photo?
But that Yaz, he tipped me off. He pulled me aside and said:
"Son, I have something to tell you. Sit down.
This may hard for you to hear, but I haven't worn a red batting helmet in four years. I wear nothing but blue helmets and caps now.
Also, I haven't worn a pullover jersey in four years either. We wear button-down jerseys. They're a lot more comfortable. We've worn them since 1979. And see those stripes on my socks? We stopped doing that in 1978.
I'm afraid, son, what you've got on your '82 Donruss card is at least a four-year-old photo of me."
I didn't want to believe it. But when I turned to my '82 Donruss Dave Stapleton for reassurance, he just spoke the words that I didn't want to hear: 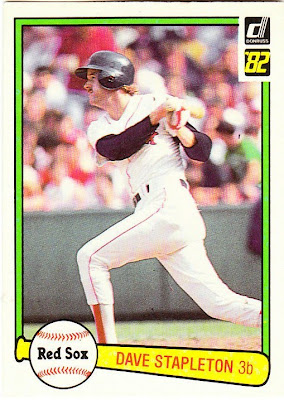 "It's true, Night Owl. Carl is right. He's the captain, you know. Listen to him.  ... Oh, and McNamara should have put me in as a defensive replacement for Buckner."
The thing is I missed the red helmets. When I first became familiar with baseball, in 1975, the Red Sox wore red helmets. It made sense. Red Sox, red helmets. I didn't even realize that it was a completely new thing that probably threw off a ton of Boston fans.
When Boston went back to blue in 1979, I was disappointed. When I saw the '82 Donruss Yaz card, I was thrilled to see the red helmet again. An old friend returned. But I knew that something wasn't right.
From that point on, I looked at card photos suspiciously. And sure enough, I found many other examples of photos that were not on the up-and-up. I may have already known about airbrushing by then, but I really began to look for it after that.
The 1982 Donruss Yaz is to blame. Or maybe it gets the credit. A card collector found his cynical side that day.

Play at the Plate said…
I like the '78 uni better than the '82. It's unfortunate, but cynicism creeps into all of our lives at some point as we age. Baseball cards shouldn't be a part of that in my opinion, but the companies are run by people and people are flawed.
May 27, 2010 at 4:12 AM

AdamE said…
While the red batting helmet was before my time, (not actually just before the time I paid attention to baseball) I always liked seeing them on baseball cards. I think it looks nicer than the blue ones.
May 27, 2010 at 8:16 AM

jacobmrley said…
The 1973 Yaz is featured in an episode of the Simpsons, #49 on this list:

AdamE said…
I think that everyone saw my comment about how 73 was the best and went along with it.

For some reason every time I went to your blog it let me vote again so I got 7 votes.