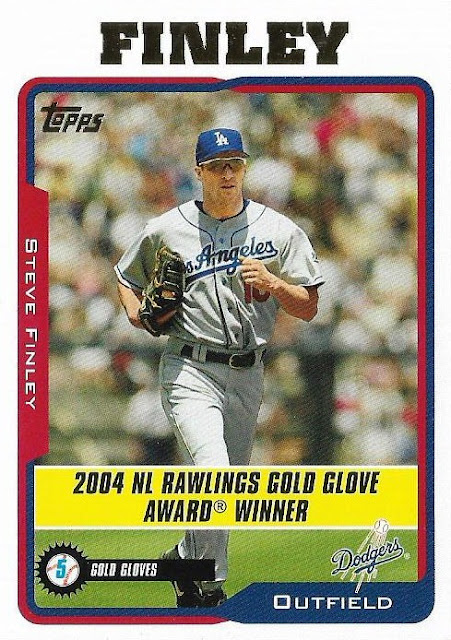 Some card blogs, for whatever reason, do not show up on my Blogger reading list. To find them, I must go to the blog roll on my sidebar.

This causes me to miss some posts from blogs that show up solely on my sidebar, only because I've been in the habit of checking my Blogger reading list since 2008. So apologies to Cardpocalypse,  Diamond Jesters, CrazieJoe's Card Corner, Collecting Cutch, Wrigley Roster Jenga, A Cracked Bat and a few others. I do get to ya, but often it's only after I discover I haven't seen ya lately. (I think it comes down to whether you have the Followers option on your sidebar, but that doesn't explain why wordpress blogs show up in my Blogger reader).

Anyway, one of those blogs that appears only on my blog roll is Highly Subjective and Completely Arbitrary. This becomes an issue during Brian's weekly Friday contests.

Not only does HSACA not show up on my reader, but it does this weird thing where it won't be listed with an updated post on my blog roll and then suddenly it's there, about three blogs down, mentioning that a new HSACA was posted an hour ago.

I've got to get to that contest!

And then I go there and two-thirds of the prizes are gone.

Fortunately, a few contests ago, I wanted something that nobody else wanted. And when I showed up late, it was still there waiting for me.

The item that jumped out at me was six cards from 2005 Topps, plus an '05 Opening Day card. 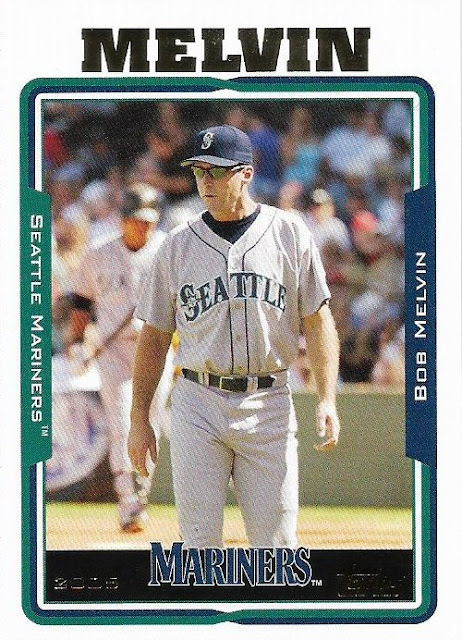 2005 Topps is one of those sets I am collecting secretly.

What do I mean by that?

Well, I don't really want anybody to know I'm collecting it.

Yeah, I know I just told everybody I'm collecting it. Sometimes you have to make sacrifices for blog posts. But, really, go back to what you were doing. There's nobody talking about collecting 2005 Topps here.

The reason I want to collect this secretly is it's not a set or collecting goal high on my priority list. Surely you know what I'm talking about. I see your want lists with "high priority," "medium priority" and "low priority." I do the same thing with sets.

There are a lot of sets I'm collecting on the down low.

1982 and 1983 Donruss. These are "someday sets." I will definitely be collecting them. And, actually, I won't care if you send me cards from those sets right now.

1969 Topps. Someday, in the distant future. Again, not complaining if I get some.

There are others. Lots and lots of others. But the names will be withheld to protect the innocent -- me -- from a bombardment.

So, let's return to 2005 Topps. Why is this a set I'm collecting stealthily? 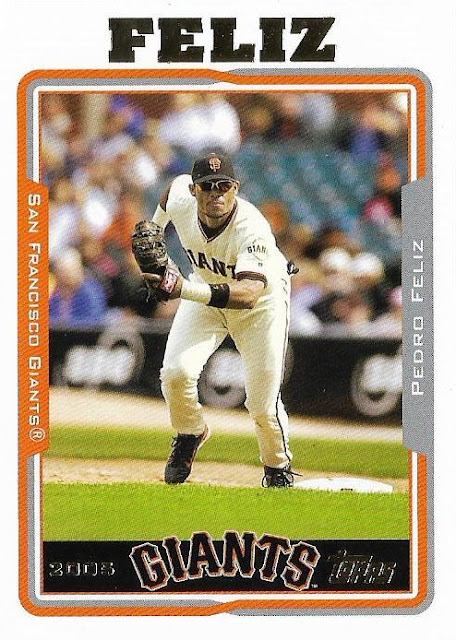 In a good way.

The design seems to come out of nowhere with its weirdness. Let's review:

The border around the photo covers a significant amount of territory. And the player images continue the trend from 2004 in which some are exceedingly small.

Finally, 2005 Topps does what I wish every set that was ever made had done: print the year of the set on the front.

That's why it's a stealth collecting goal for me. 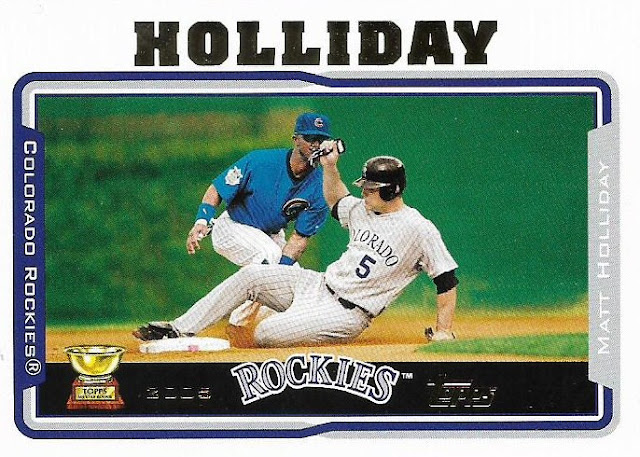 There is no want list for this set. Honestly, I have so little idea of what I need and what I don't that some of these cards from Brian could actually be dupes. 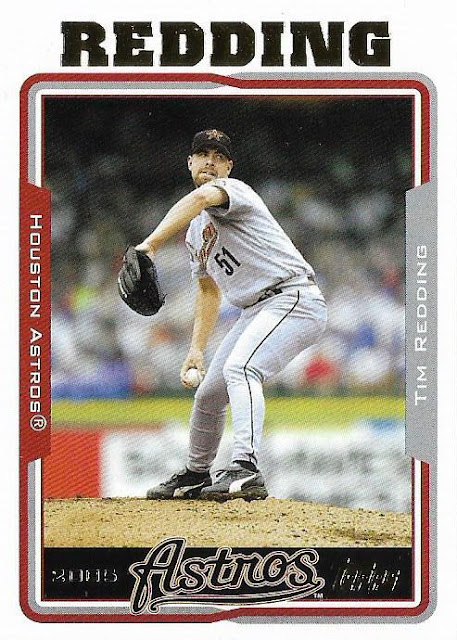 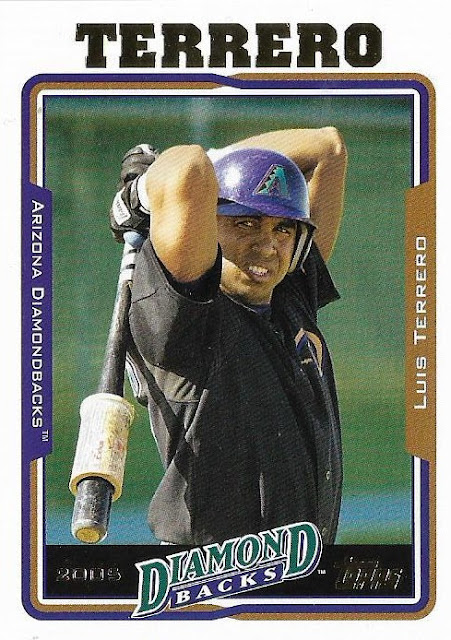 I was casually following baseball in 2005, as I slowly pulled out of my baseball malaise from the late 1990s (currently in another one of those, by the way).

But that year I was on the edge of following more enthusiastically. I was collecting again, finishing off my 1975 and 1974 Topps sets, and I had discovered the Topps All-Time Fan Favorites cards in Kmart. The very next year -- 2006 -- I would return to collecting modern cards.

So, yeah, that's the reason why I jump on '05 cards periodically when the mood strikes. 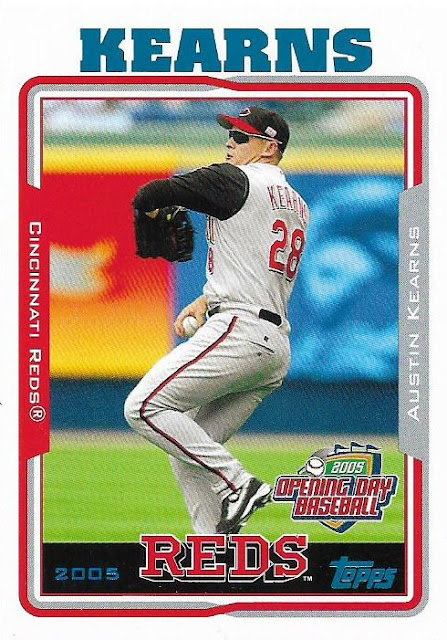 Because I think I like that even more than 2005 Topps.

Alex Markle said…
2005 is one of my favorite sets as it coincides with when I really started getting into collecting. I suppose it's one of those nostalgia sets for me.

My blogger reading list has been weird lately as well. None of the newer blogs I've followed show up, so, like you, I have to go to the blog roll on my sidebar. Strange.
June 8, 2020 at 7:59 PM

Billy Kingsley said…
I don't understand the concept of not working on every set at the same time. 90% of my collection, I would wager, I got by being in the right place at the right time. I would have missed out on so many great cards if I only made time for one or even a handful of sets.
June 8, 2020 at 9:58 PM

It's simple really: I prioritize sets because we all have a limited time on this earth. I want to make sure the ones I like best are completed first.
June 8, 2020 at 10:30 PM

bbcardz said…
Love the blogger.com blogroll format. I wish I could make my Wordpress blogroll work like that.

btw, what's up with "J.B.Trading Sportscard Blog" on your blogroll? I clicked on it once and it seemed to be some kind of movie spamming site--definitely not a card hobby site. I hope somebody didn't somehow hack your blogroll.
June 8, 2020 at 10:32 PM

night owl said…
No, it's likely some former card blog who let the blog domain name expire and some spammer took over the blog. It happens from time to time. It's not the easiest thing to remove blogs from the blog roll but I found it and removed it.
June 8, 2020 at 11:08 PM

Commishbob said…
1) I'm not sure of the difference between Blogger Reading List and the blogroll over in the right-hand sidebar. But I do know that Blogger does some very weird things. I've never been able to get consistent notifications of comments being posted (not that I get many). I ALWAYS get an email notification when I post a comment ON MY OWN BLOG. Like I need to be notified of that.

Michael Ott said…
The blue foil on Opening Day makes reading a bit easier in my opinion. Topps came out with a few interesting designs during my collecting hiatus. The big team name in 2005 evokes memories of 86, 75 and 64, all of which I'm quietly chasing ;)
June 9, 2020 at 8:52 AM

Matt said…
My reading list seems to have just Blogger blogs that I have followed. I have one of those by the way - maybe I'll show up on both of your lists if you press that little blue button! ;)

What I find weird is that not all of the blogs on my reading list show up on my blog roll as well as vice versa. I'm not quite sure what's going on there.

Any other Blogger users go to the new format yet? Does your reading list make you click on a "you're leaving this site" link before taking you to the blog, or is that just me?
June 9, 2020 at 10:40 AM

night owl said…
Yup, I hadn't hit that button for you. Done!

Yes, I receive the "you're leaving this site" link on the new Blogger format. One of several annoying things about the update.
June 9, 2020 at 11:06 AM

Nick said…
Aside from '03, 2005 Topps might be my favorite Flagship set of the aughts. It's well done looks almost nothing like any other Topps set ever made. Plus I bought A LOT of packs of it as a teenage collector, so it's got the nostalgia thing going for it, too.
June 9, 2020 at 5:49 PM

Nick Vossbrink said…
I like 2005 as well except that I hate the DRAFT PICK and PROSPECT cards which replace the player name and screw my brain up. Oh and right there with you on "casual" set building. They eventually hit a point (quantity or encountering a deal) where they become active but until then I'm content to let them roll along (1989 Donruss is one I'm currently doing that with)
June 9, 2020 at 11:55 PM

Scott Crawford said…
I'm pretty sure I've got '03-'05 Topps for you, if you change your mind on this, and come up with a bunch of Superstars MusiCards for me. If nothing else, it'd make it a lot easier than either of us trying to figure out the rest of each others' want lists. I've got some stuff ahead of all this, and of course, sing it with me, there's kind of a pandemic happening right now, but let me know, because I think I can make something work, if you want to admit to yourself that you're collecting any of it.
June 19, 2020 at 5:14 AM

night owl said…
I'll go through your Superstars MusiCards wants or at least send you a list of what I have. Then you can reply at your leisure.
June 24, 2020 at 6:43 PM