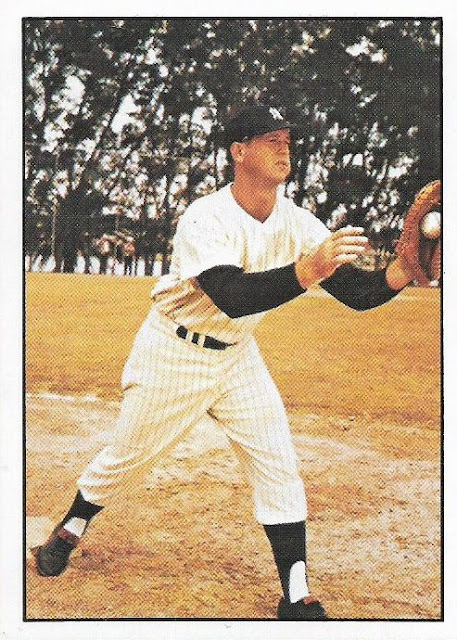 I've been doing fairly well adapting to life without baseball games to watch.

There are some baseball players for which you remember them because of their association with sudsy goodness. In fact, if you had to come up with one fact off the top of your head about one of these players, something having to do with beer would probably be in the top five of the first things you utter. In some cases it would be the first thing.

Here's one example of that: 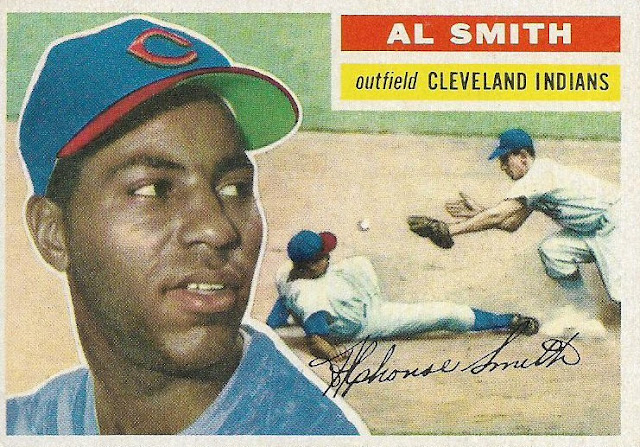 A lot of people these days haven't heard of Al Smith. He was a solid-enough player for the Indians and later the White Sox who was noted for his fielding above all.

Above all, except for one particular moment: 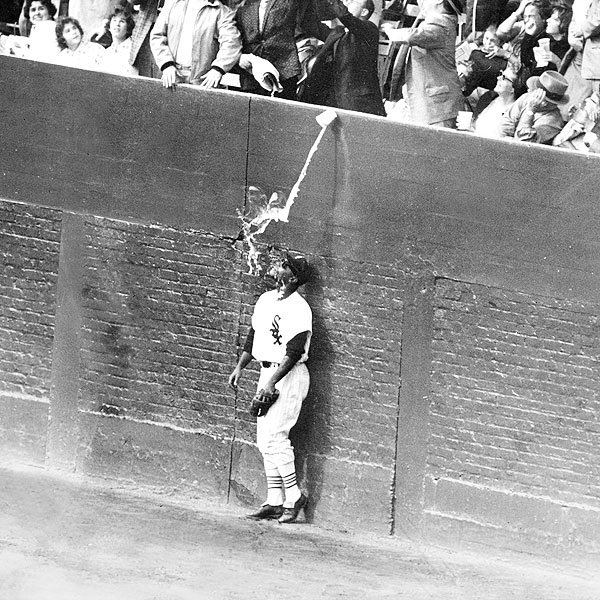 That's the famous photo of Al Smith being doused by a cup of beer while looking up at a home run by the Dodgers' Charlie Neal in Game 2 of the 1959 World Series.

Smith was drenched accidentally by a fan who was attempting to shield the ball from his boss' wife, according to this story. The photo, taken by Ray Gora, was picked up across the world and Smith became an instant celebrity for nothing but having beer splashed in his face. 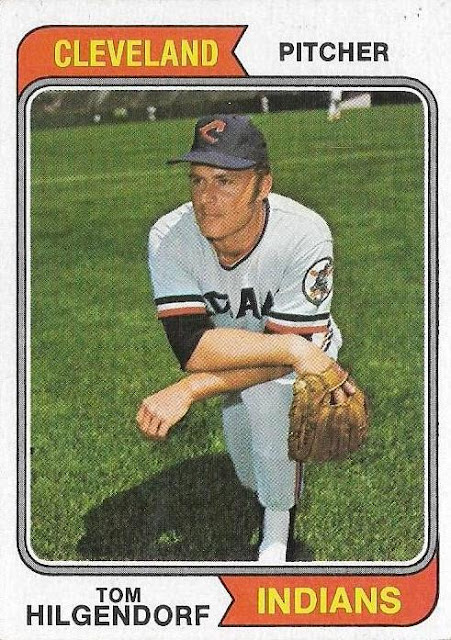 Here is another example of a player who immediately immerses fans into a beery haze.

Many players received the brunt of the chaos, getting pelted with all kinds of things from the stands, but Hilgendorf received the worst by getting beaned by a metal folding chair because fans were actually throwing METAL FOLDING CHAIRS.

The first Hilgendorf cards I ever saw as a kid were his cards from 1975 and 1976 Topps. In each example I thought he looked at least 48 years old. It's no wonder. He was recovering from getting bashed by a metal folding chair! 1974 Topps Tom Hilgendorf has no idea what's coming. 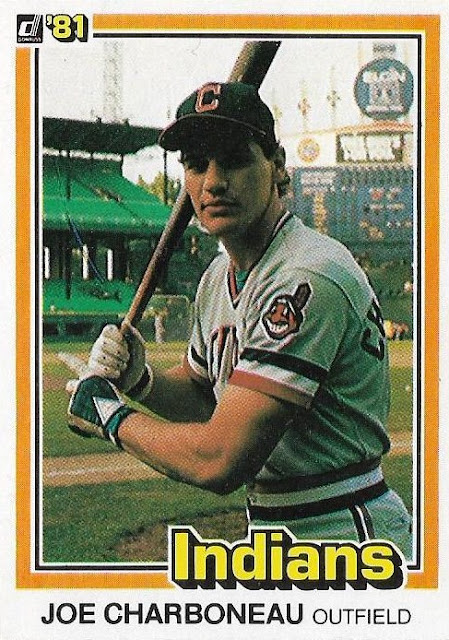 Another example and the third straight Indians card I've shown. What's that all about, Cleveland? Hmmm.

I've already written about this particular card. But if you weren't around then, let me fill you in:

The scoreboard behind Joe Charboneau on this card reads "This Bud's For You".

The scoreboard is serenading Super Joe Charboneau, who was known during the height of the rookie frenzy about him in 1980 as an eccentric chap who, among other things, enjoyed opening beer bottles with his eye socket. He also could drink beer through a straw from his nose.

My goodness, 14-year-old me was thoroughly impressed.

Many years later, when Charboneau's name comes up, that's one of the thoughts immediately surging to the front of my brain. The guy opened beer bottles with his eye socket! I can't even open a beer bottle with my hand sometimes! 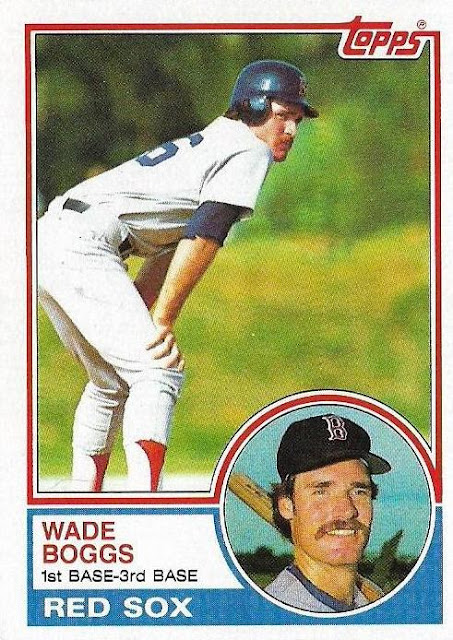 Until about, oh, seven or eight years ago, all of the stories about Wade Boggs and consumption revolved around chicken.

That's all we heard about during his playing days. Boggs ate chicken every day during the baseball season. It helped his batting average, he said. People started sending him chicken (who does this?). And he earned the nickname "The Chicken Man".

But then, a few years ago, people began to tell stories about Boggs' beer drinking. Depending on who you talked to, they said Boggs told them he drank anywhere between 60 and 107 beers in a single day. One Hundred Seven.

Once I heard that, the chicken, the Hall of Fame career, riding onto the field on a horse, Margo Adams, all of it faded into the background, drowned out by a wave of 107 beers.

OK, maybe not exactly. Boggs is no Al Smith or Joe Charboneau. He's still one of the best hitters I've ever witnessed. And doing it while consuming all that chicken and beer may be the most impressive career feat ever. 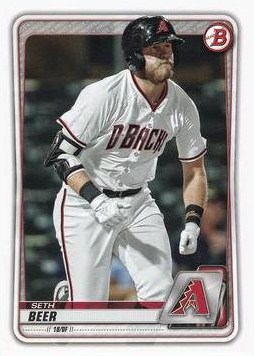 But until I do, Seth Beer will make me think of beer first.

I'm a little surprised I haven't heard him mentioned. Beer started appearing on cards with Panini's USA sets and he's started popping up in Bowman, first with the Astros last year and now with the Diamondbacks. He played in Double A ball last year.

Beer's top skill is hitting for power, which sounds promising for someone named Beer. 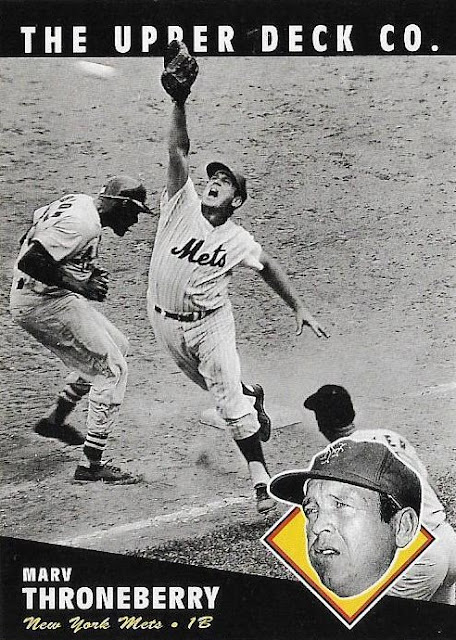 My introduction to Marv Thronberry didn't come when he was with the Yankees, as shown on the TCMA card on the top of the post. I wasn't alive then.

It didn't come during his futile ways with the 1962 Mets. I still wasn't alive.

No, I first heard the name Marvelous Marv Throneberry watching the Game of the Week on NBC on Saturdays and viewing this comical man on Miller Lite Beer commercials.

Miller Lite introduced me to so many sports oldsters. Folks like Ben Davidson, Joe Frazier, Tommy Heinsohn, Bubba Smith, Dick Butkus and Nick Buoniconti were introduced to me through Miller Lite commercials.

Since Throneberry's appearances on beer commercials, I've come to know more about his career, I will always think of the beer commercial first before anything he ever did in the field, legendary bumbling or not. 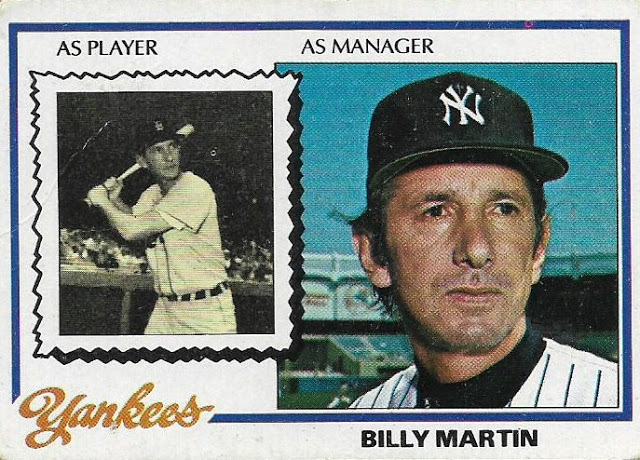 Then Martin was killed in an auto accident on Christmas Day about seven miles from where I grew up. He was coming home from a bar with a friend. To this day, there are conflicting beliefs in who was driving the vehicle when it crashed. But either way, drunk driving was probably involved.

And so beer -- I'm assuming it was beer -- became forefront in my thoughts when I think of Martin.

Kind of a sad way to end it, I guess.

But there are probably other, happier, player associations with beer that I missed. So if you know of any others, shout them out!

Meanwhile, I'll hit "publish" on this post, which is a bit disappointing just because this is kind of fun:

Zippy Zappy said…
Seth Beer is a former first rounder for the Astros who was traded to the Diamondbacks in the Zack Greinke trade. He was the best name/player in that trade (Greinke included) but we'll see how his development fares now that he's away from the Astros who are "somehow" able to produce good prospects and in Arizona (who are not).
June 28, 2020 at 7:52 PM

Swing And A Pop-up said…
I love those old Miller Lite commercials.

Fuji said…
After figuring out the direction of this post, I immediately thought of Billy Martin and Bob Uecker.
June 28, 2020 at 10:51 PM

Brett Alan said…
Following up on what Fuji said, when I think of the Lite Beer commercials, I think of Uecker ("I must be in the front row") and Boog Powell ("Hey, you're Boog Powell!").

Lots of stories here I didn't know--guess that comes from being a teetotaler! That really is a great photo of Al Smith; what a thing to be known for!
June 28, 2020 at 11:02 PM

Commishbob said…
Apropos of nothing, my first baseball glove was an Al Smith model.

Old Cards said…
Good stories. The only one I knew was Al Smith and you provided some details about his story that I didn't know. As a teen I tried to be cool and drink beer, but hated the taste ans still do. But there is no doubt it is tied to baseball as you have demonstrated so well.
June 28, 2020 at 11:36 PM

Comatoad said…
And of course, there were the athletes involved in the old Miller Lite commercials of the late '70s (Remember, "Less Filling,"
Taste Great?"), with athletes like Boog Powell, Bob Uecker, Mike Ditka, and others such as Mickey Spillane? Those use to be pretty darn fun!
June 29, 2020 at 12:03 AM

bbcardz said…
As entertaining as those old beer commercials were, they were unable to make me a beer drinker. I'm so glad, too. Many loved ones would still be alive today if they had made the decision not to drink. Here's a hashtag I've never seen on Twitter: #AlcoholIsOverrated
June 29, 2020 at 2:00 AM

Adam said…
Waite Hoyt is another person I associate with beer, mainly for his association with Burger Beer while he was the Reds radio announcer. (which is funny considering he was an AA member for most of his life).
June 29, 2020 at 9:41 AM

bryan was here said…
Ahh yes, Super Joe Charboneau. A shame injuries derailed his career, he could have been the stuff of legends.
I remember all those Lite Beer from Miller (what it was called back then) commercials. In high school, during the basketball games one half of the student section would shout "TASTES GREAT" and the other side would respond, "LESS FILLING!"
June 29, 2020 at 8:18 PM

acrackedbat said…
Draft. That's worth a chuckle! A toast to you, Night Owl. Your ideas and creativity never ceases to impress me.
June 29, 2020 at 9:15 PM