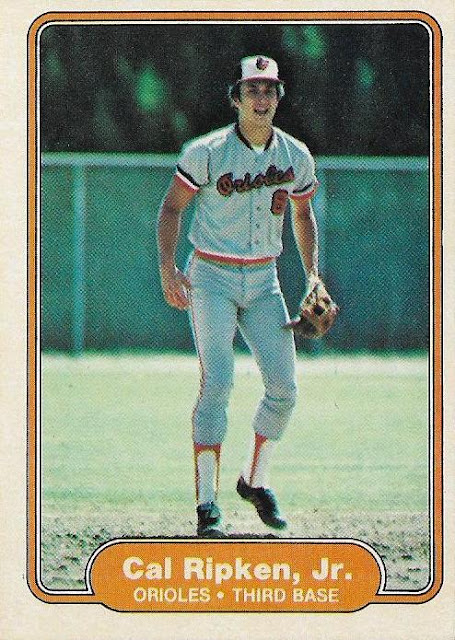 Last month, Beckett published a list of the top 100 baseball cards of the 1980s.

The list tried to reflect the era of the '80s, i.e., which cards best defined the time period between 1980-89. Naturally, the vast majority of the 100 cards were rookie cards.

This will not be the case when I compose my top 100 cards of the '80s later this year (I swear, I'm going to do it). But I get it. If you're going to try to sum up collecting in the '80s, you're going to have to cover rookies and error cards. That's all anyone talked about in the '80s.

Since I'm not that kind of collector, I wondered how many of the cards on that top 100 list I actually owned. I didn't expect to do very well, even though I was collecting, off and on, through the whole decade.

It turns out I have 50 of them -- better than I anticipated.

Since I am primarily a set collector, and that was especially the case in the '80s, most of the cards I own from that list are tied up in sets. And most of the ones I don't own are in sets that I don't have or haven't completed.

Here are the key sets that I don't own that include multiple cards in the top 100:

The obvious No. 1 card, the Ken Griffey Jr., is an '89 UD card. So is the reverse negative Dale Murphy and the John Smoltz. I have a small amount of '89 UD, but none of those cards.

Boy, did I wish I picked up that set back in '84 when I was collecting. But I was only half-assing the hobby then and traded sets weren't on my radar. Now, try to get one of those sets. Thanks to the Roger Clemens and Kirby Puckett and Don Mattingly cards in that set, among others, it's not easy.

I have maybe 25 cards from '87 Donruss that aren't Dodgers. It's not a set that I am interested in collecting, Greg Maddux rookie or not.

Substitute '87 with '86 and Maddux with Canseco and the thought's the same.

This is another set I wish I picked up back then. But my collecting was at its lowest point of the '80s in '86.

I'm not terribly heartbroken about not owning those cards or some of the others (I didn't even know there was such a thing as 1989 Bowman Tiffany until I read this list).

Most of the cards on the list that I do wish I owned are involved in sets I'm currently collecting.

The 1982 collecting season was an active one for me and I have owned the Ripken rookie for Topps and Topps Traded since 1982. But I never pulled the Fleer rookie in 1982 and I'm pretty sure I traded the Donruss rookie that year to my brother, who is the Orioles fan.

So it's about time -- 38 years later -- that I get those other Ripken rookies!

The Ripken card was the 50th one from the top 100 list that I have acquired. I do expect to go over the halfway mark before the year is out. If I want to complete the 1985 Fleer set then I'll need to snag the Roger Clemens card.

Most of the other sets featuring cards on that list don't interest me. I won't be picking up a 1989 Donruss The Rookies set or a 1986 Fleer Update set unless it falls in my lap. And I sure won't be cherry-picking cards from sets just to own a Fred McGriff or Roberto Alomar rookie. I don't play that game.

OhioTim said…
The 1982 Fleer Cal Ripken Jr was the first of his rookie cards that I picked up for my player collection of Ripken. And like your post from earlier this week, I got this card for a steal. I got in 1997 at a card show outside Detroit for $5 because the dealer was going out of the card business after that show.
May 22, 2020 at 7:54 PM

Brett Alan said…
If anyone cares, I bought a wax pack box of those Fleer cards at a show in 1982. Must have been a good deal, because I think it's the only time I bought a whole box like that back in the day. Luckily there were two Ripkens inside, one of which is the one NO just received. I couldn't think of a better home for it.
May 22, 2020 at 9:23 PM

Fuji said…
Thanks for sharing that link to Beckett's list. I love 80's rookie cards... so I'm excited to see which ones made the cut. By the way... I need a haircut too. I was so jealous when I read that GCA got a haircut this morning. I've come close a few times to shaving my head, but I've gotta meet with students three more weeks and by then... I think barber shops will reopen in my area.

Nick Vossbrink said…
This looks like the same list they published a year and a half ago. Or if it's not is functionally identical in terms of the boringness of the choices. I may like 1980s cards but seeing a list of all the hot rookies is a reminder of why I got bored with the hobby the first time around.
May 23, 2020 at 1:02 PM

Jeff B - Wax Pack Wonders said…
I think I have roughly 27 from that list. Wish they would have dug some more for non rookies to feature. And not sure why they felt compelled to choose the Tiffany versions for some.
May 23, 2020 at 9:27 PM