May 07, 2020
(Today marks exactly one month of working from home. I have no idea why I couldn't have started doing this 10 years earlier. Time for Cardboard Appreciation. This is the 292nd in a series): 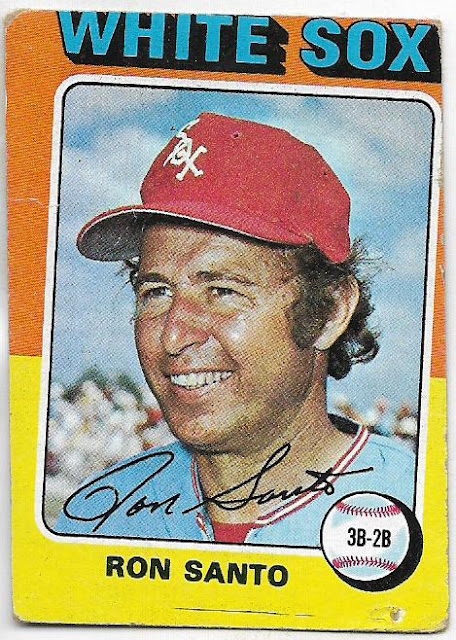 This is how I came to know him. Mini-sized. The most diamond-cut of all diamond-cuts. And a member of the Chicago White Sox.

That's what I knew of this Santo fellow. He played for the Chicago White Sox. And he appeared on strange-looking cards. I pulled this card out of a pack in 1975, having no idea that he spent the vast majority of his major league career with the White Sox's city rival, the Cubs.

Eventually, probably many years later, I re-associated Santo with the Cubs. However, when his name pops in my head -- and that happens very rarely -- he is a member of the White Sox. On a crooked card. You just can't destroy the power of first associations. You can force it down, way in the subconscious. But you can never kill it. 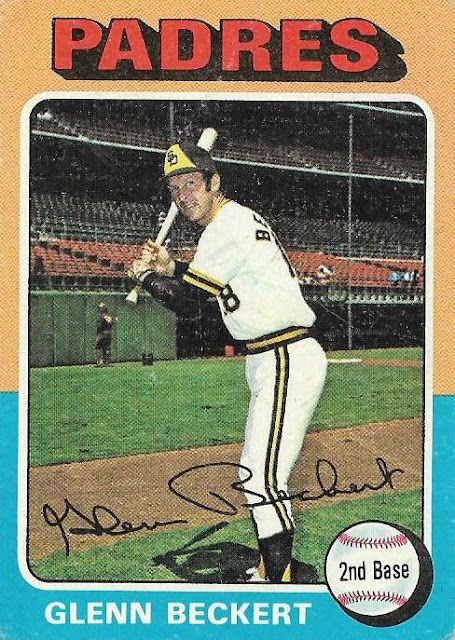 Here's another former Cub in the 1975 Topps set, the recently departed Glenn Beckert. This is how I first got to know him, as a San Diego Padre.

I later figured out he was a key member of the Cubs' 1960s infield, just as Santo was. But, again, if I'm pulling out the first Glenn Beckert card because someone has a gun to my head with that very bizarre demand, I'm going straight for Padre Beckert.

This may enrage a Cub fan or two, but I consider it payback for all the times a Cubs fan has told me that they consider Ron Cey a Chicago Cub first.

Cey's Cubs career was a speck compared with his time with the Dodgers, where he became a multi-year All-Star and a World Series hero. No chance of the same happening with the Cubs. Even worse is when someone tells me, "I think of Ron Cey as an Oakland A!" OK, you just be quiet with your nonsense. You don't have to say EVERYTHING.

But first associations are a funny thing and a product of when someone grew up. As much as I don't think Nolan Ryan should be consider a Texas Ranger first -- his career was clearly on the downswing during those years -- that's when an awful lot of collectors came to know Ryan.

And so it goes. Wade Boggs for me is a member of the Boston Red Sox. Others say -- weirdly -- that he's a Yankee or a Devil Ray. To me, Jack Morris is a Tiger. Others say he's a Twin. Fernando Valenzuela is without a doubt a Dodger. Then some contrarian will announce cheerily, "I only remember him as an Oriole!"

Well, good for you.

But I do the same thing when I bring up Chicago White Sox Ron Santo.

One day, many years from now, people may have forgotten all about the time that Bryce Harper was a Washington National -- that is if he stays with the Phillies for the rest of his career. Perhaps no one will think of Gerrit Cole first as an Astro or a Pirate.

The only way to avoid such confusion is for a player to remain with the same team for his whole career. But there are very few Brooks Robinsons, Tony Gwynns and Stan Musials. As much as Angels fans refuse to accept it, there could very well be people, probably not even born yet, who will announce proudly: "I know Mike Trout as a Seattle Mariner!"

Anyway, this whole topic came about because the Padre Beckert was one of the cards I claimed from The Collector's free card giveaways. I received the smattering of cards just the other day. 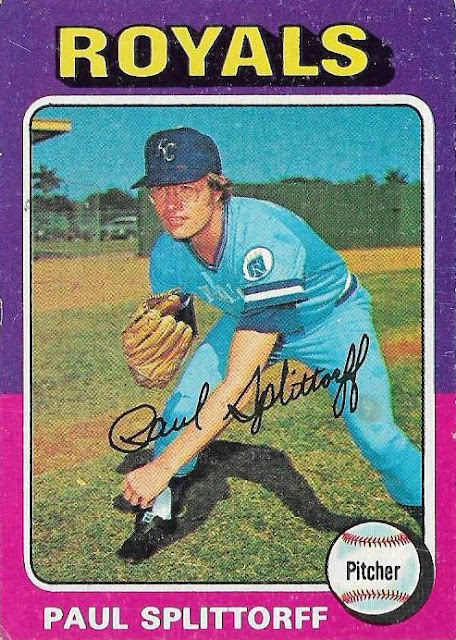 I claimed a couple of 1975 Topps cards up for grabs. As you know I've completed this set. I did it about 15 years ago.

But I just can't bear to see '75 Topps cards go unwanted. Plus for someone who loves the set so much, I never seem to have anything to send people when they say they're trying to complete it. Shouldn't a '75 aficionado have '75 extras spilling out of every window and door? 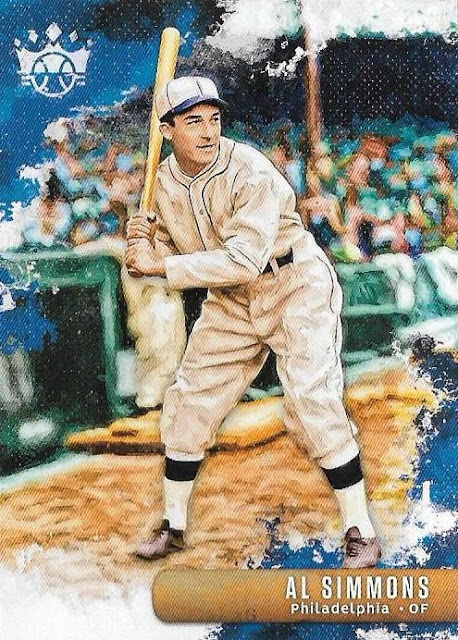 These are about the only players that make sense in Panini's Diamond Kings series. Make them as old-timey as possible. I have so few cards of Al Simmons. This is my third. I like that better than having two. 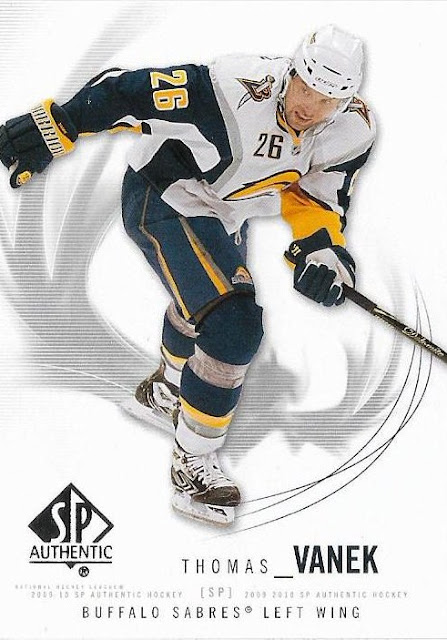 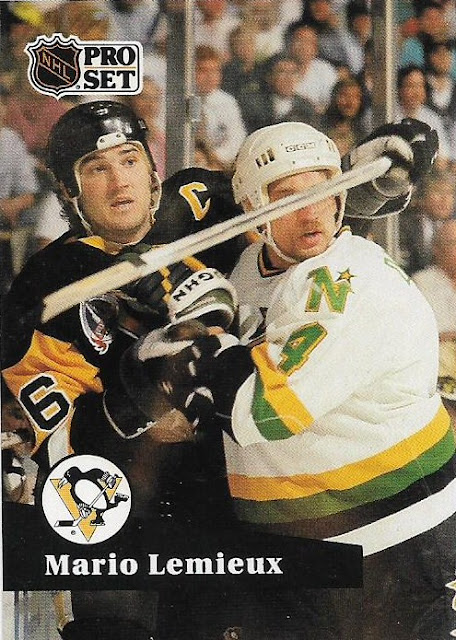 A couple of hockey dudes to close things out.

I remember when Thomas Vanek was the best player on the Sabres. Now, people probably say, "I only know him as a Red Wing," or "a Minnesota Wild".

The Mario Lemieux is for the slow-and-casual 1991-92 Pro Set hockey pursuit. I still don't think people believe I'm serious about acquiring these cards. I expected to be buried in them by now. But that's cool. I'm totally out of binders these days.

So, thanks, Chris for the cards.

And if anybody has any team first associations that drive them crazy -- or they drive others crazy with -- feel free to mention them.

Mike the History Teacher said…
Don Kessenger was the Cubs' shortstop for more than a decade in the 60s and 70s and played alongside Santo and Beckert for most of those years. But I knew him first with the White Sox after he came to the South Side late in 1977, my first season as a fan. He was the Sox' player-manager for most of 1979 before resigning and being replaced by rookie skipper Tony LaRussa. Kessinger has the distinction of being the last player-manager in the American League.
May 7, 2020 at 8:51 PM

steelehere said…
I’d imagine you putting together a second 1975 Topps and 1975 Topps Mini sets would give you more satisfaction that most of the sets on your want list.
May 7, 2020 at 10:47 PM

jacobmrley said…
I was reading your slightly blasphemous opening and all I could think was "well, I am of the age that I knew Ron Cey as a Cub not a Dodger" and you BEAT ME TO THE PUNCH! That's quality writing.

Fuji said…
One that I struggle with is Rollie Fingers. He's played for the A's and Padres (my two favorite teams... yup... I'm that guy) but I always picture him with the Brewers. And the one that bugs me is when people remember Rickey for his time with anyone outside of the Athletics.

Comatoad said…
Nice Glenn Beckert card. As for a player remaining with the same team his entire career, I have to go with Gwynn. In fact, he would have turned 60, tomorrow, May 9. MLB TV is airing a couple of Gwynn features and a couple of his best games.

Adam Kaningher said…
Edwin Jackson has played for almost half the teams.