The best Dodger card for every year I've collected: update 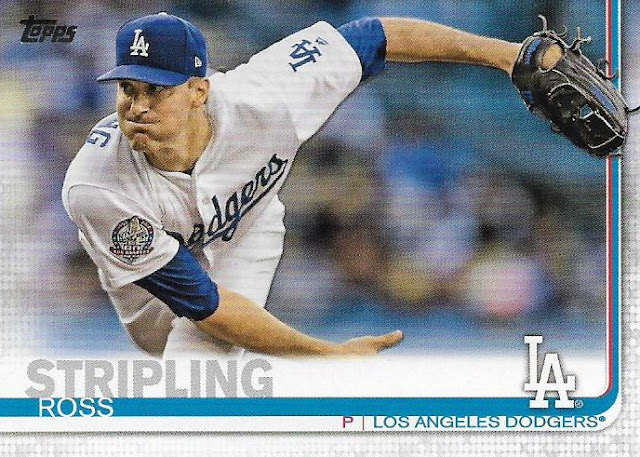 Next year will mark 45 years since I first started collecting cards.

Now don't worry. That doesn't make me feel old. When it's been 50 years, then I'll feel old.

A couple of years ago, I wrote a post to track my favorite Topps flagship Dodger card for every year since I started collecting. I make a selection in my head every year so it was about time I documented it somewhere.

I still haven't accumulated every Dodger card from this year's flagship. I came up empty with the packs I bought yesterday and I'm still three cards short -- Bellinger, Buehler and Ryu ... hmmm, isn't that funny, only the three players doing the best for the Dodgers this year.

But I've seen the card images for each and they're nothing but run-of-the-mill action shots. Nothing that will be in contention for 2019's best Dodger card. 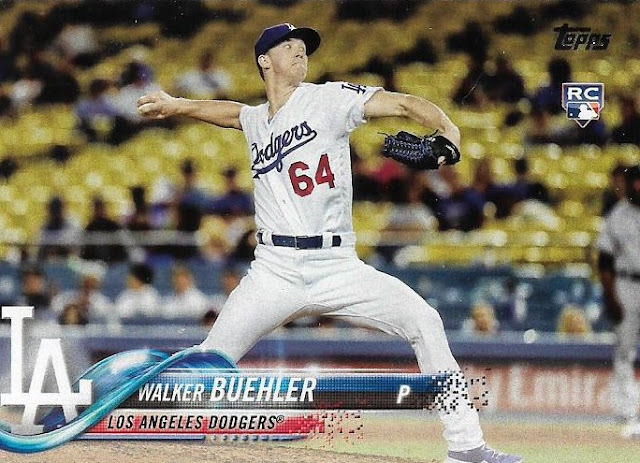 Now we're at 2019 and I'll run through the candidates.

The Ross Stripling card above is a candidate just because it's a rare close-up action shot with an atypical crop. It's also the only one of the candidates that breaks through the design, which I like a lot. But the throwing hand is cut off and it annoys me just a little so I'm not selecting it. 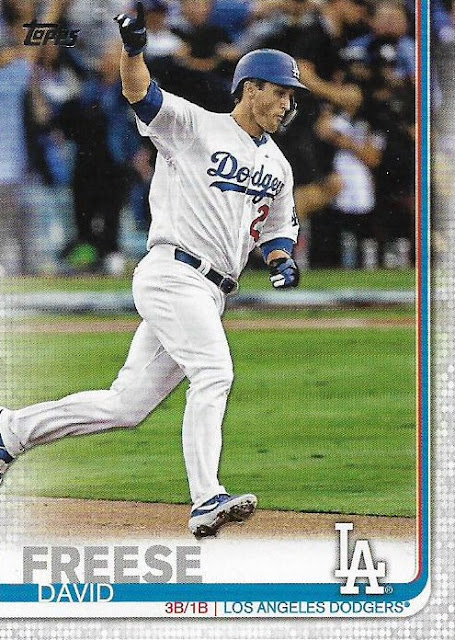 Candidate 2 is David Freese, gesturing as he rounds the bases after hitting a home run. The last two years of Dodgers cards have been heavy on postseason images and this is one of them: Freese's first-inning home run in Game 5 of last year's World Series.

But we all know how that ended and the home run didn't even get the Dodgers the lead so painful memories regardless of the celebration. 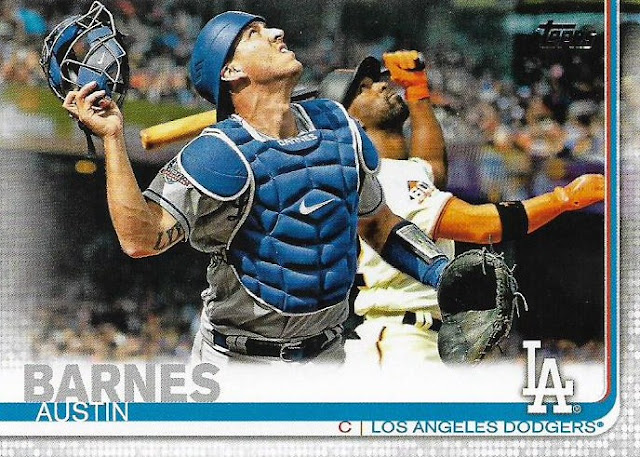 Third candidate. Fun card. A particularly fun card for a Dodger fan if Barnes did indeed catch the nasty Giant's pop up. (It actually looks like it's out of play).

This potentially could have worked better as a vertical card (although the original photo is cropped as a horizontal) and all I think of when I see this is how marginal Barnes is as a major league player. So this isn't the best either. 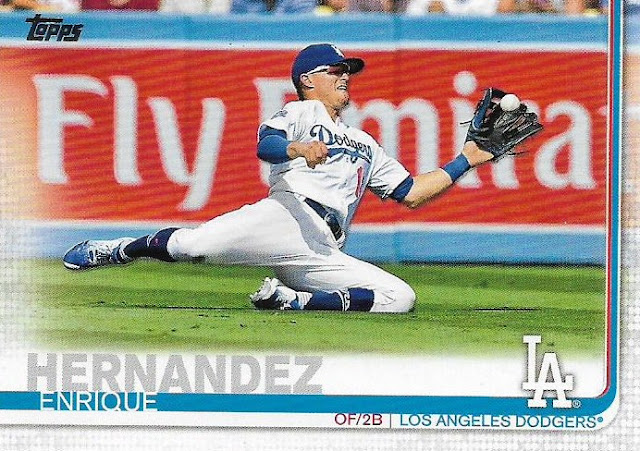 By process of elimination, here is my favorite flagship Dodger card for 2019.

It's not a strong choice. Even though Kiké Hernandez made a terrific sliding catch on this ball against the Angels in July of 2018, there's an awkwardness about it when cropped down to the area of a baseball card. Still, Hernandez will never be known as the most graceful player, so this is the winner.

And now it's time for a rundown of the best for every year:

You can see that nine of the last 10 favorites have been from landscape cards. As long as Topps continues to include horizontal shots and rely on Getty Images for photos, I don't see the traditional vertical card photo breaking through too often in the future.

OK, I'm off to grab those last three 2019 Dodgers needs -- hopefully from someone pleasant enough not to make me pay a buck fifty for a flagship card of Bellinger.

John Bateman said…
I thought you were going with the Austin Barnes card - that one is pretty amazing and reminds me of a 1950's posed photo.
September 10, 2019 at 8:08 PM

CrazieJoe said…
Nice how the 2009 design, instead of just a close up of the pitcher, getting the batter in the shot as well makes a huge difference on how interesting and better the card is.
September 11, 2019 at 6:39 AM