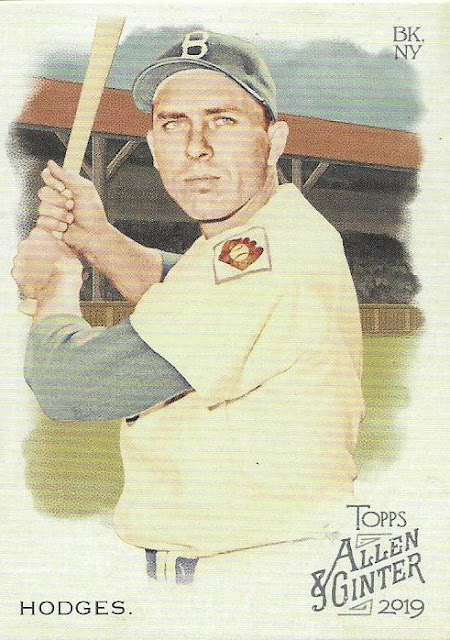 The Dodgers have been flexing their farm system prowess the last couple of years and seem to be ramping it up most recently, calling up instant successes like Alex Verdugo, Matt Beaty, Will Smith and Gavin Lux, which followed other very recent rookie success stories like Walker Buehler, Cody Bellinger, Corey Seager and Joc Pederson.

There is nothing I like more about my favorite sports team than their ability to churn out talent. Not only does it help lead to a consistent winner, but it's my go-to argument against fans of other teams who whine about the Dodgers' big-market ways. Granted, you need money to sign and scout players and develop them, but that's just part of being a fully functioning franchise. If you can't create your own quality farm system, then, well, you deserve to be the Tigers or Padres or whatever incompetent, every year. Don't accuse my team of doing something wrong or unfair.

To me, the ability to produce your own superstars indicates there is more than just luck or physical talent or even cash involved in your success. It means there is brains behind the operation, people who can think and work and basically aren't dumb-asses.

The Dodgers -- with the exception of those horrible McCourt years -- are known for creating homegrown talent, underlined by their record number of Rookies of the Year. Here is the list as a reminder:

That is a source of immense pride for me, someone who has absolutely nothing to do with any of it. But I just love that about my favorite team.

I was reminded of this by a couple of Allen & Ginter envelopes that arrived from fellow collectors. The first came from Jeffrey of Cardboard Catastrophes, who sent the Gil Hodges card I just showed. Hodges hails from the days when player development was about all a team had. There was no big free agency signing to boost your team. You needed players in your system and thank goodness the Dodgers featured the father of that kind of thinking, Branch Rickey.

Hodges was signed by the Dodgers in 1943 (after turning down an offer from the Tigers, interestingly enough) and after a brief period in the minors was with the big club for an extended run of success with the Bums.

But mostly I was reminded about the Dodgers' player development by an envelope from Matt of Bubba's Bangin' Batch of Baseball Bits, a noted A&G collector if I've ever known one. This is what I saw when I pulled out the cards: 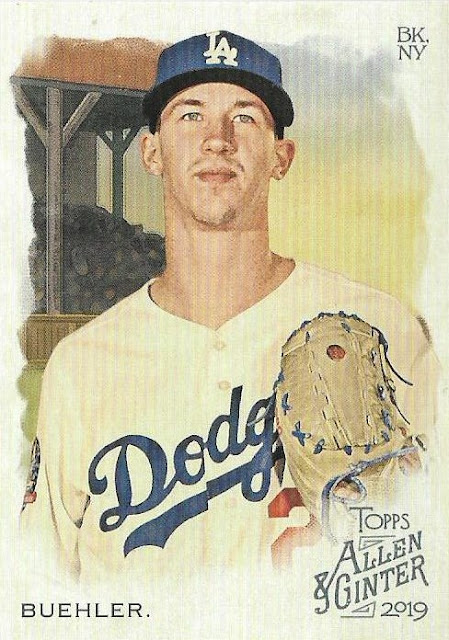 Walker Buehler. Drafted and signed by the Dodgers out of Vanderbilt in 2015, after declining a Pirates offer out of high school. 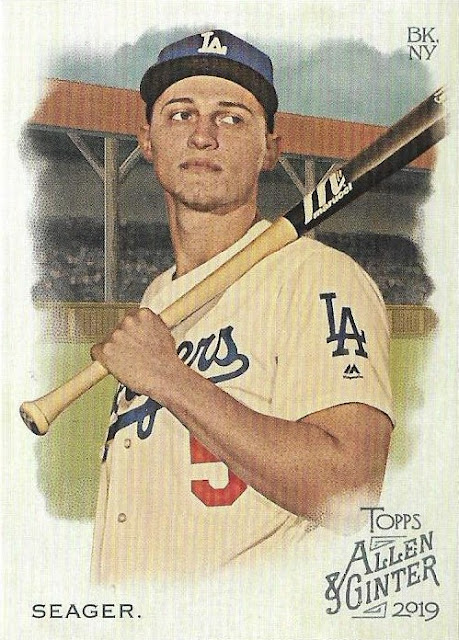 Corey Seager. Drafted and signed by the Dodgers out of high school in 2012. 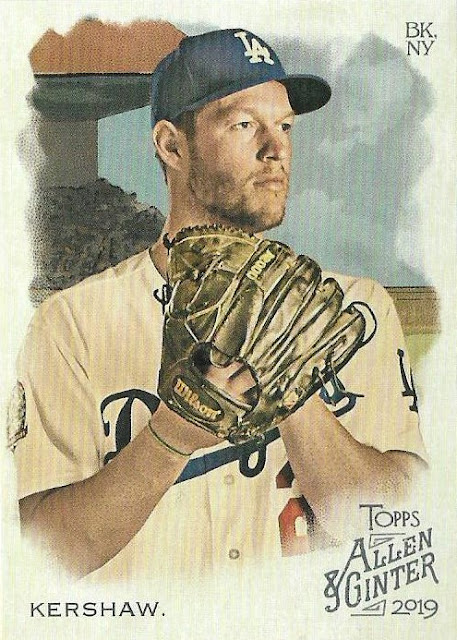 Clayton Kershaw. Drafted and signed by the Dodgers out of high school in 2006 (this is a case where the Dodgers benefited from being lousy in 2005 as they had a top 10 pick and Kershaw was regarded as the top pitching talent in the draft. But still, that by itself, Brien Taylor, guarantees very little). 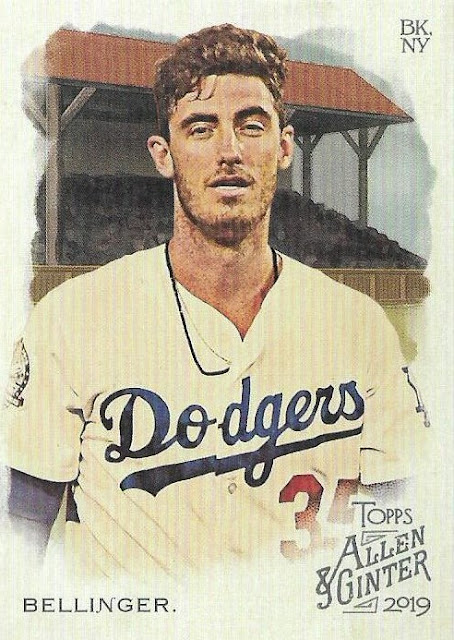 Cody Bellinger. Drafted and signed by the Dodgers out of high school in 2013. 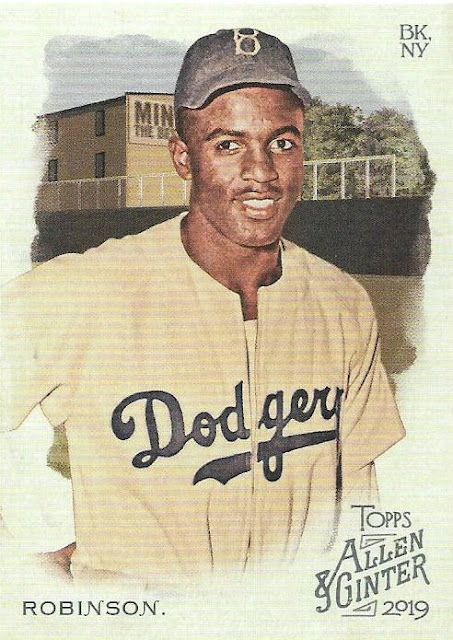 And Jackie Robinson. You know his story already. But it's all Dodgers all the way.

This doesn't mean that the Dodgers don't go the free agent route or trade for players, etc. Of course they do. Now, more than ever, the Dodgers are known for trying to uncover finds that slip by other teams and that's why the Dodgers have: 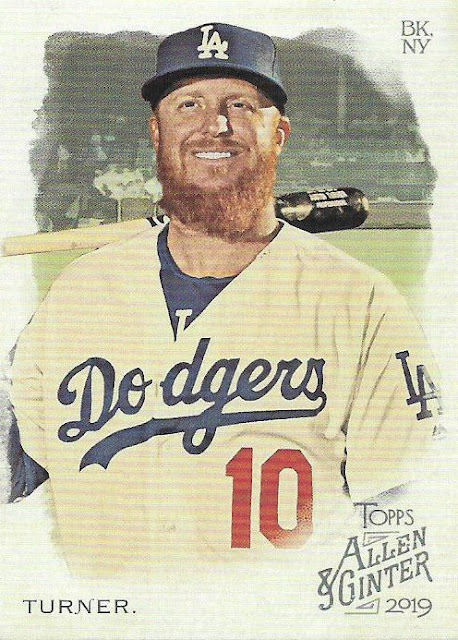 Justin Turner (from the Mets) 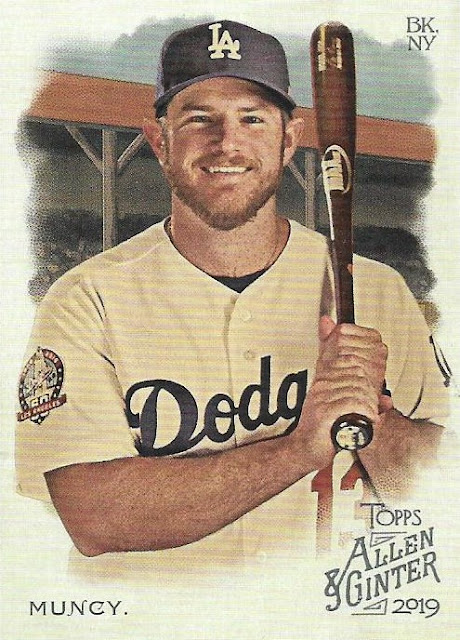 And Max Muncy (from the A's)

The Dodgers do make dumb deals and decisions and I can cite several of them by rote. But they're still one of the smarter teams when it comes to developing players and that will always take you far. No guarantees of winning that World Series though. 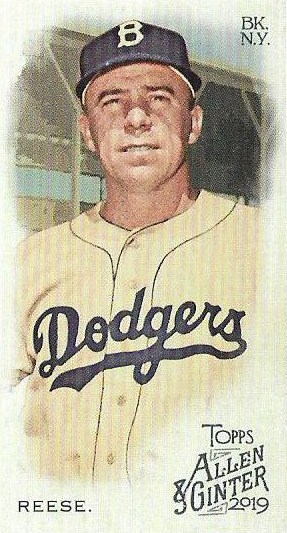 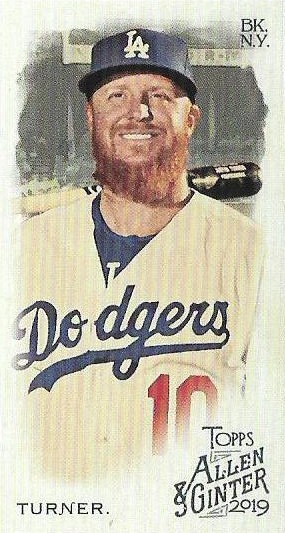 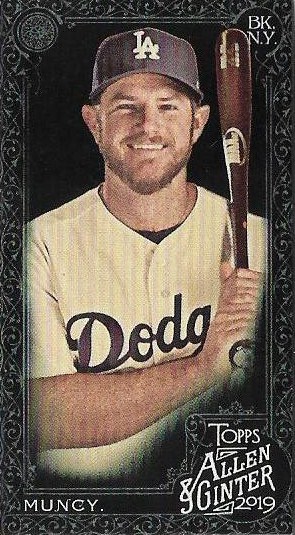 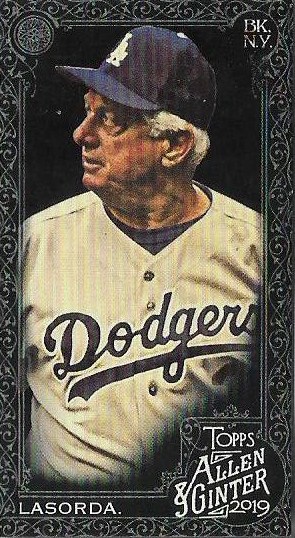 He always gets his hands on those Ginter X cards.

Thanks to these two packages I'm down to needing just one more card to finish the team set in short-printed Tommy Lasorda (EDIT: Never mind, just pulled it!) and I'm starting to make some good progress on the Dodgers minis.

Matt also sent some non-Dodger minis I assume in an attempt to crack my frankenset binder. It is an impressive foursome that held major promise: 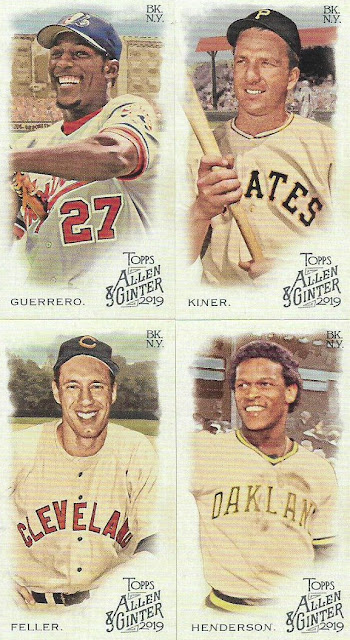 So, which ones are now in my A&G frankenset binder?

Yup. The 2019 Feller is already there, it cracked the binder last week. The Rickey Henderson and Vlad Guerrero weren't able to unseat the the card at their spots because I already have a Guerrero and Henderson in the frankenset. Meanwhile the Kiner lost a dogfight with the Stan Musial mini -- why oh why does Topps insist on putting legends at the same numbers?? I have two cards of Nate McLouth and Carlos Gomez in the frankenset! Come on, man!

So, you Henderson and Guerrero collectors I have a mini for you if you're interested.

Dennis said…
That's absolutely a super cool thing to be proud about. I remember all the fanfare with the '92-'96 run but don't remember hearing much about the four straight starting in '79 (not that I was alive at the time). Also, Jackie's win was big since it was the first of two years where there was one ROY for both leagues. And lastly, I can't help but point out that two of your ROY winners, Sizemore and Howe (plus Chris Sabo, who won in '88) came from my alma mater :)
September 15, 2019 at 8:25 PM

Brett Alan said…
Matt Vasgersian on the ESPN Sunday night game talking right now about how much of the Dodgers' success is homegrown. Great minds think alike, or did he read your post between innings? B^)
September 15, 2019 at 9:08 PM

EbeSPN said…
Wilton Guerrero was supposed to keep the 90s streak going in 1997, despite batting .291, a corked bat led to a suspension and he didn't receive any votes for ROY, which Scott Rolen won. His brother Vladimir would finish 6th for ROY and go on to have an ok career.
September 16, 2019 at 11:03 AM

Bubba said…
Dang. 0 for 4. Gotta get better. How do you like the X minis this year? Unfortunately, I don't have any base for you this year as I didn't get to open any boxes (those were leftovers from mini lot purchases). :(
September 16, 2019 at 7:40 PM

Fuji said…
Hey now. The Padres have one of the best farm systems right now. Well... that's what I've heard. Then again... it doesn't matter unless they are able to perform at the MLB level.
September 16, 2019 at 10:44 PM