August 28, 2018
(Late August is proving to be uglier than usual. The car repair payment I have to make probably means selling a few cards in my collection. That's not good. But neither is draining the savings. It's time for Cardboard Appreciation. This is the 272nd in a series): 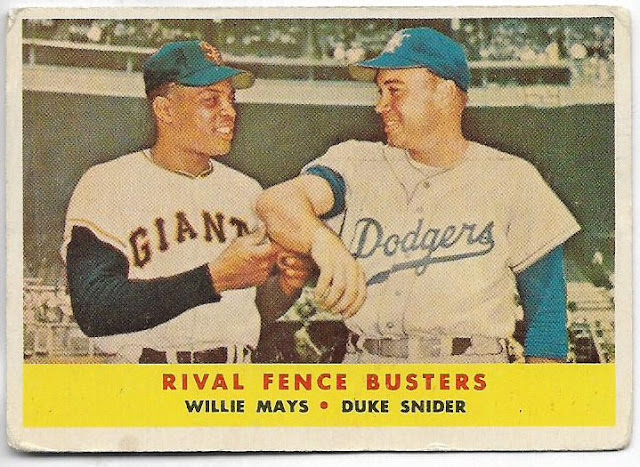 I'm hoping that this happens to some other team collectors besides me.

Those old standbys of the 1950s and 1960s, resurrected about 10-15 years ago in a much less friendly fashion, prove to be elusive when I'm trying to complete my Dodgers team sets, mostly because I forget about them all the time.

Take this wonderful item, which was sent to me by Jeff at Cardboard Catastrophes.

Not even a month ago, I was convinced that I had gotten down to a single Sandy Koufax card to complete my 1958 Topps Dodgers set. It was a semi-triumphant moment. All of that work was well worth it to get within a Koufax of completing the '58 set.

But I heard nothing. Because it's a combo card. They just don't register with me for some reason.

Anyway, that ugliness is over because I now own No. 436. It's a rather odd card. Willie Mays is supposed to be admiring Duke Snider's bicep, I guess? And what's that mess on Snider's cap? Topps is famous for scrawling in the "L.A." on the Dodgers' 1958 cards but that thing is a muddle.

Can't believe I forgot that card. 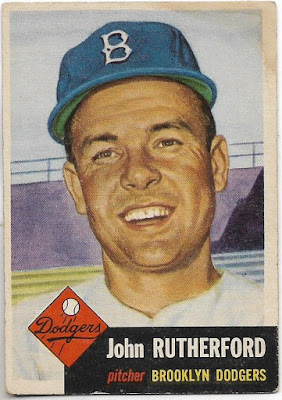 Jeff also pulled this card out of the discount box (I'm going to assume these were found at The National, as I know he went). It was a need from my 1953 Topps Dodgers list.

It's almost the last non-name player from that want list. It's all Robinsons and Podreseses from here on out.

These two cards are much appreciated and the perfect condition for the '50s cards I own. They'll be nice and neighborly with the other cards in that portion of the binder.

steelehere said…
Do you also have the "Dodgers' Boss & Power" (Alston/Snider) Combo Card from 1958 as well?

Mark Hoyle said…
When making my original lists for team sets I made a point of going back and adding all the combo cards. I also added any leader card that also had a guy from my team on it. A few sets even had checklists with guys on them.
August 29, 2018 at 4:41 AM

Fuji said…
Car repairs suck. Home repairs too. I dropped $2200 on my daily driver back in the spring... plus another $7000 on a new AC unit earlier in the year (although gotta say this purchase was totally worth it). Wish I had considered selling some cards to help cover the costs. Sayonara savings.

Congratulations on finally knocking off the '58 Dodgers team set. That Rival Fence Busters definitely deserves to be appreciated.
August 30, 2018 at 11:07 AM