Nine-year-old me is standing and applauding 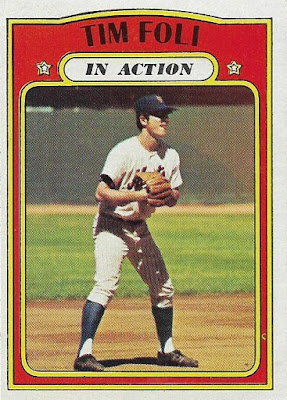 On Thursday, I completed the 1972 Topps baseball set.

This is tremendous news. It is tremendous news in particular for a 9-year-old kid from Upstate New York who had just wandered into a world of baseball and the picture cards that display that sport. He is awe-struck, astonished and, frankly, a blithering idiot. His mind has been blown.

The '72 set -- I've said it before -- is the one set that I think of when someone says "baseball cards". To someone younger, the cards may look rooted in the past, wild and crazy, and almost primitive. But that's only because they did not stumble into this hobby during one golden, sun-splashed day in the early 1970s.

I saw 1972 Topps cards only in the hands of older kids. And I probably first saw them before I even started collecting. To me, those cards -- that design -- said Baseball Cards. That's what trading cards were supposed to be. That has stayed with me for so long that now when I look at my binder of 1972 Topps, it will transport me to those days of gazing at '72 Topps and thinking "so, that's a baseball card."

That binder of 1972 Topps is now complete because I added the final card to its pages today. 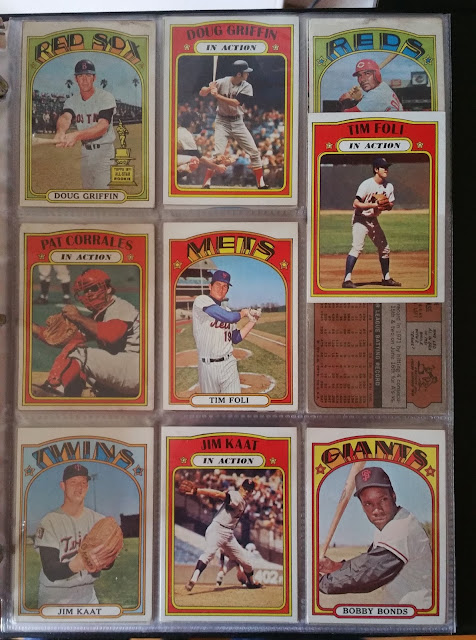 That final card -- the Tim Foli In Action card -- arrived in the mail Thursday twice. Two different envelopes each produced the elusive Foli.

The first one I opened came from Commish Bob at The Five Tool Collector. I wasn't expecting that. It arrived with a well-grooved crease through Foli's kneecaps and Bob said it would make a good space filler.

That it would ... if I didn't get another Foli In Action from Scott Crawford of I Need New Hobbies from that same trip to the mailbox.

I knew Scott was sending me the card. We arranged that he would mail me "The Last Card I Need To Complete My 1972 Topps Set" last week, and he graciously used some COMC credit to produce the card as part of trade we were wrapping up.

So, I had two Foli In Actions, except now I don't. Scott is also attempting to complete the '72 set and I just sent that creased Foli IA to him in the mail. See how it all works out? That's some righteous trading there if I do say so myself.

Before including Foli IA in my binder -- and announcing to the world that my 1972 Topps set was complete -- I did the gremlin check that is now required before a set is officially complete. Gremlins -- i.e. missing cards you thought you had -- have burned me in set completion tasks too many times. But I'm happy to say no gremlins were found. The complete set is intact.

In that post I said I had completed about one-third of the set and expected my attempt to complete it to last the rest of my lifetime. But I'm happy to say, unless my demise is scheduled for this evening, that '72 Topps is completed with plenty of time to spare!

Also in that post, I counted down 12 favorites from the '72 set based on the modest collection of cards I had at the time.

I'd like to do that for you again now, but with owning the entire set. I'm also going to attempt to show no cards that I've mentioned before in previous posts, nor the usual cards that everyone has seen before (the Clemente, Billy Cowan, Billy Martin, Hoyt Wilhelm, etc.). 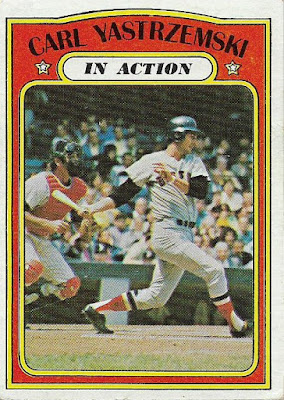 1. Carl Yastrzemski, In Action: Many of the 1972 In Action cards look amateurish compared with today's action photography. But this is one I'd put with at least what I saw in the 1980s. A nice, centered shot of Yaz at work. 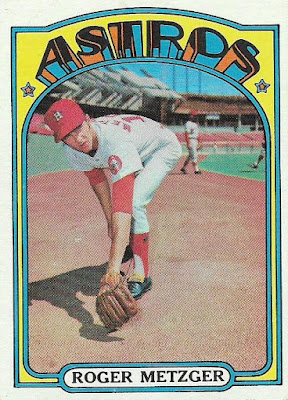 2. Roger Metzger: I have a love affair with the 1972 Topps Astros cards. I think the brightness of the Astros' uniforms of that time goes well with the the yellow-blue-and-orange theme chosen for their cards. Every color in the rainbow is displayed here, and Metzger's unique pose, along with the interesting crop, makes for a memorable card. 3. Mark Belanger: For many baseball hitters in the 1970s, this is how you held the bat. There was no need to squeeze the life out of the bat knob. Try to picture a player today holding a bat five inches off the end. 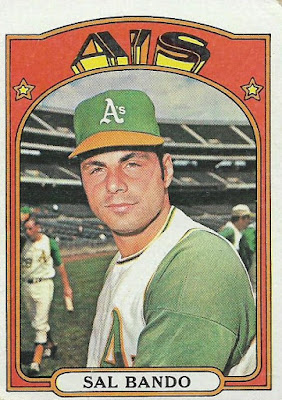 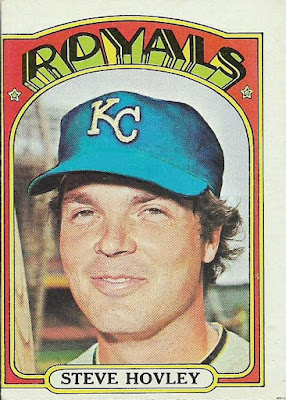 ... Steve's been traded to the Royals! 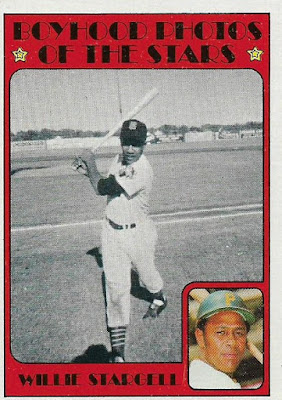 5. Willie Stargell, Boyhood Photos of the Stars: Is there a better example of a baseball card with a photo that illustrates the promise that awaits with one swing? 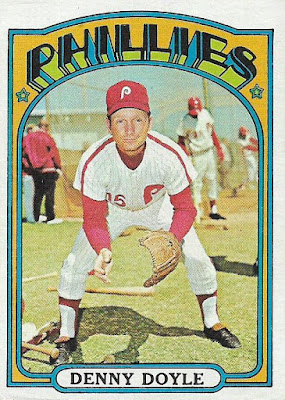 6. Denny Doyle: If you know the Phillies cards in the '72 set, you know that many of them are a disaster. Equipment strewn everywhere. People milling about. This one is probably the best example. My favorite part is that if this photo were to be extended to the right, you might see a series of Phillies players performing a baseball task to infinity. 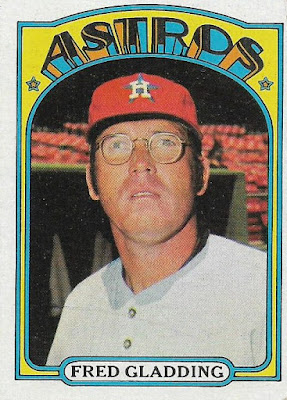 7. Fred Gladding: Remember those novelty glasses with the eyes on them? I'm sure Fred Gladding is wearing a pair. 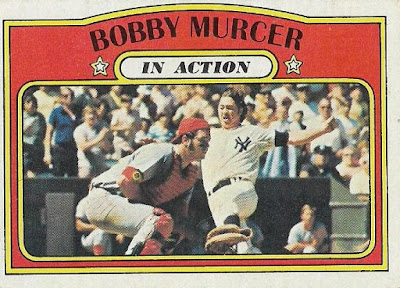 8. Bobby Murcer, In Action: The last couple of times that I've mentioned to my favorite vintage card show dealer that I needed only a handful of a cards to complete the set, he guesses the Bobby Murcer In Action card. I've begun to think that this is the scarcest card in the set. Or that the dealer is hoarding this card. 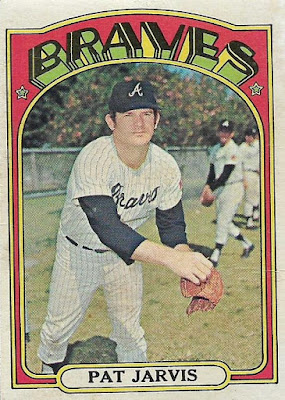 9. Pat Jarvis: I've lived in the Northeast all my life. I've never seen an orange tree in person. To me, they are exotic and spotting them on a baseball card is a trip. If that's not an orange tree behind the fence, I don't want to know. 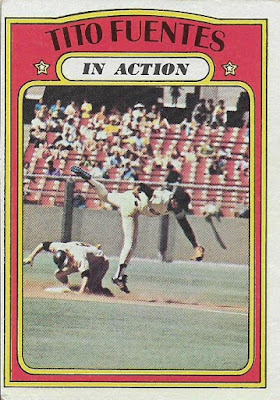 10. Tito Fuentes, In Action: If it weren't for the balletic moves illustrated by the runner and fielder, they would fade into the very busy background. 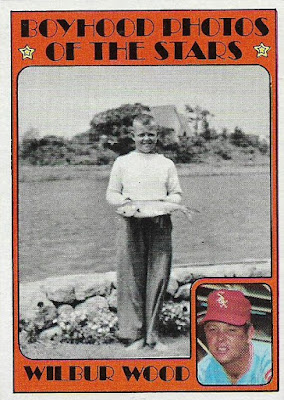 11. Wilbur Wood, Boyhood Photos of the Stars: You guys, I may have completed the 1972 Topps set, but young Wilbur Wood has caught himself a fish. And he's standing in the garden so he can tell you about it. 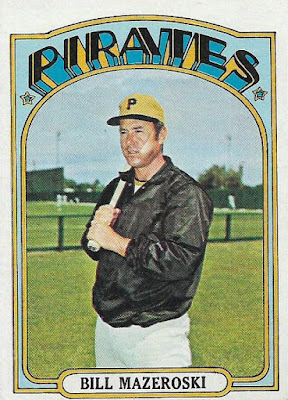 12. Bill Mazeroski: This is Mazeroski's final card. He'd show up in the 1973 Topps set as a Pirates coach on the manager card. This card speaks to me. There's Bill. He's ready to hang it up. His jacket is on. His job is done. It's time to go home.

And my job is done here. I will never have to moan about short-prints or look for the Bobby Bonds In Action card or count my cash to see whether I can afford a bleepin' team card ever again. The set is done and it was A Process.

Many thanks to Scott Crawford and anyone else who sent me cards for this set. Many thanks to Brian at Play at the Plate for holding a contest a few years ago that allowed me to land the Nolan Ryan card in this set.

I may upgrade some of the cards, but basically I'm done fretting over what I've always considered The Baseball Card Set.

That 9-year-old still can't believe it.

Mark Hoyle said…
Congrats on the completion. You are right this set definitely reminds me of my childhood
April 21, 2017 at 8:24 PM

Anonymous said…
Wow, congratulations! I am truly impressed by this accomplishment. I've got just over 100 cards to go myself, but it's all HOFers and high numbers.

I don't know if the Murcer IA is the hardest, but I know it was a pain to find an affordable one to complete my Mets team set (as there's a Seaver puzzle on the back).

This reference is probably wasted on... well, just about everybody, but give Fred Gladding a mustache and a zebra-print smoking jacket, and he'll be ready to play Percy Dovetonsils.
April 21, 2017 at 8:59 PM

David said…
In many ways, you and I have led a parallel baseball card collecting existence. I was on the other coast, and although I started in '73, the 1972 set always had that certain mystique. You captured it well. The beauty is not only in the unique 'psychedelic tombstone' design, but the Peter Maxx style WAS 1972.

Billy Kingsley said…
Congratulations. That's a high achievement. The colors and photos make me want to collect them and I am not even a baseball guy.
April 22, 2017 at 2:05 AM

carlsonjok said…
Congratulations! After a year working on this, I'm still 142 cards from finishing and, like most everyone else, it is mostly stars and high numbers. I expect it will be another year to complete it.
April 22, 2017 at 10:21 AM

Nick said…
Congrats! '72 houses many of my favorite cards of the '70s, and it's definitely a Top Five Topps set for me. I've been in love with the Fuentes IA in particular since my early collecting days.
April 22, 2017 at 12:43 PM

Commishbob said…
Proud to be the contributor of "The Shortest Reign'd Set Completing Card in Blogger History".....or something.

Fuji said…
Congratulations! It took me a few years of collecting, before this set popped up on my radar. By the late 80's, I knew I wanted to own it one day. It took three decades, but I finally added my birth year set to my collection. But I totally cheated and bought my set. Those high #'s scared me away from trying to build it.
April 22, 2017 at 10:59 PM

Fleerfan said…
Congratulations on completing one of the most beautiful sets of all time!
April 23, 2017 at 3:54 PM

mr haverkamp said…
Congrats on completing one challenging set. Can't wait to see how Heritage handles this in 2021. Sure hope the pictures are as clear as they are in series 5/6, when the photographer finally utilized a flash attachment!
April 23, 2017 at 4:42 PM