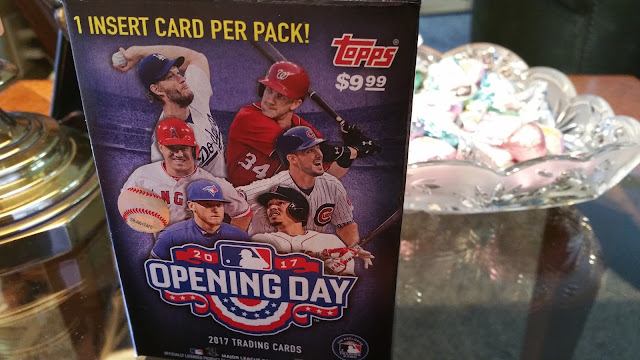 Anyone who follows sports is probably familiar with the various media outlets' fondness for something called "power rankings".

This is where CBS or USA Today or whatever fly-by-night online site ranks all of the teams in a league, from strongest to weakest, under some highly suspect criteria. Some of the rankings are based on a statistical formula but I believe many of them are not. They are based either on a voting panel or often-times strictly on the whim of whoever is writing the power rankings story.

In some ways this matches the process that is used to rank the top college football and basketball teams each year. The AP rankings/coaches rankings is one of my biggest of many pet peeves with college football. The whole ranking is based on virtually nothing -- just on the opinion of the people who watch the games -- and yet people babble about them constantly as if they have meaning.

I admit, looking at power rankings -- even if I know it's rated according to the "feelings" of the writer -- is interesting to me. It's sports mind-candy. There's nothing to absorb, but I'll always look because LISTS! RANKINGS! YAY!

With that in mind, I thought it would be fun to apply the power rankings tradition to the blaster of Opening Day I received for Easter. I don't buy a lot of blasters of current product anymore, but I think every time I do buy one, I'll perform my own power rankings, and then average them all up and figure out which team I'm pulling the most often in a given year.

That's how I will rate the power rankings for this blaster: by the number of cards I pull of each team. To break ties, I'll weight inserts as being more important than base cards (normally, I'd never do this, but let's face it, the only reason to buy Opening Day is for inserts). Parallels -- although they suck now that there are no borders -- will also be key. And, finally, there is no better insert than a mascot insert.

So those are the rules. It may not be much, but I'm willing to bet it's more criteria than is used for many of the power rankings you see. 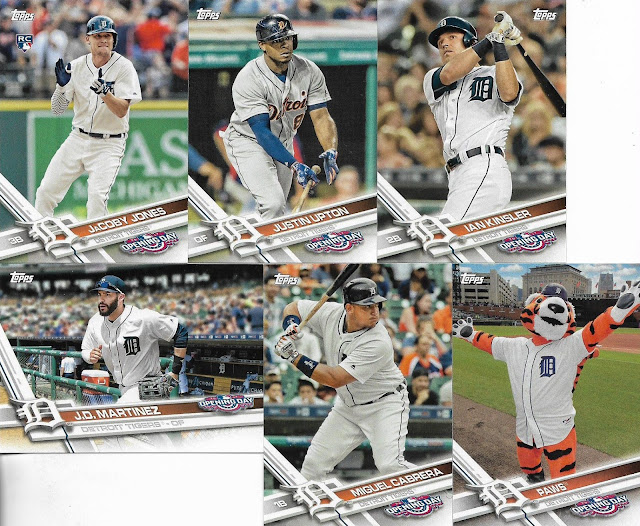 1. DETROIT TIGERS (6 cards): Tied for the most cards, including a mascot card. Cabrera, Upton and Kinsler all came out of the same seven-card pack. That's impressive. 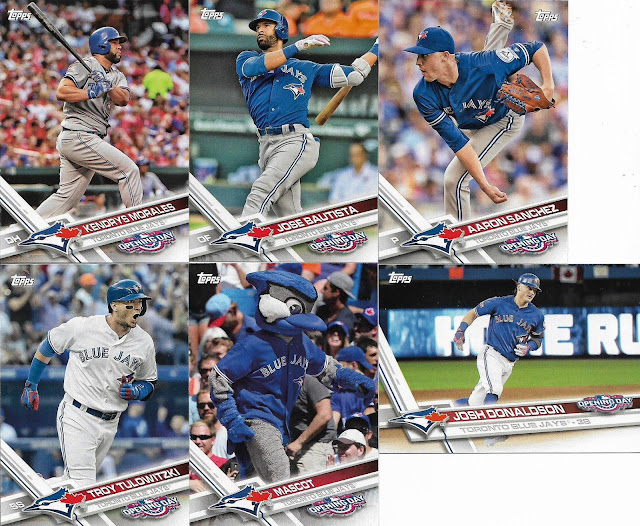 2. TORONTO BLUE JAYS (6 cards): Same number of cards as the Tigers and a mascot, too. The Tigers are rated higher based on that one three-Tiger pack. 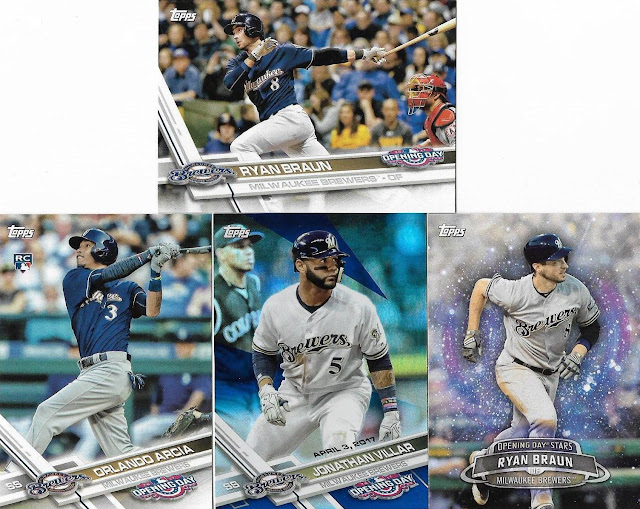 3. MILWAUKEE BREWERS (4 cards): I can picture the stunned look on Tony L.'s face. Yup, I pulled four Brewers from one blaster, including an insert and a parallel. Maybe he can ease up on Topps just this once. 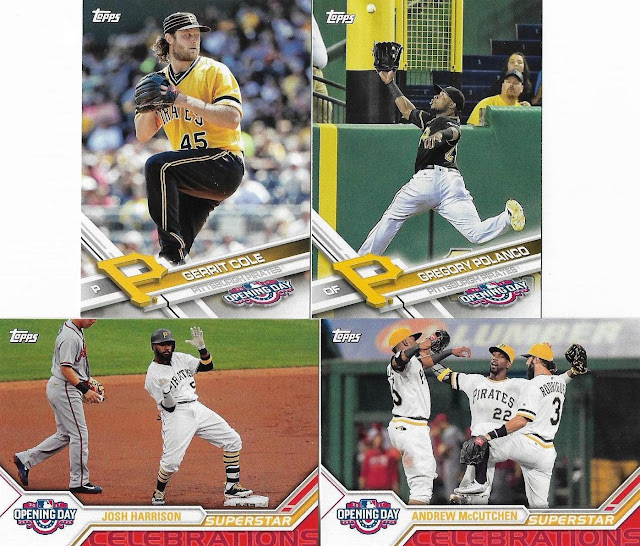 4. PITTSBURGH PIRATES (4 cards): Not one Superstar Celebration insert, but two of them! That is pretty impressive. Topps seems to be shying away from the mass team celebrations this year. 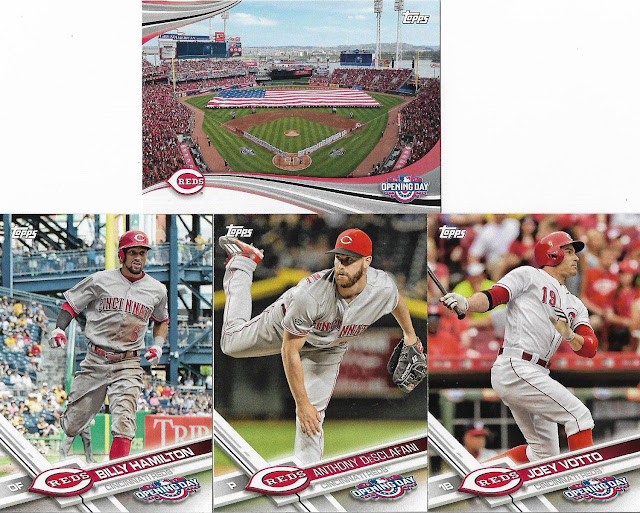 5. CINCINNATI REDS (4 cards): The small-market, Central Division teams fared very well in this blaster, just about the opposite of how they do in the usual media power rankings. 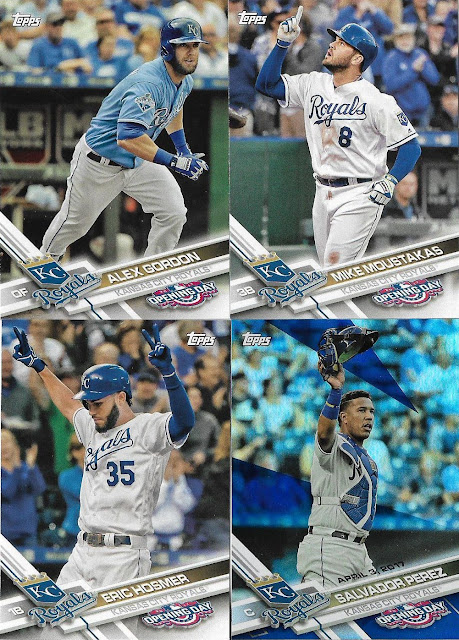 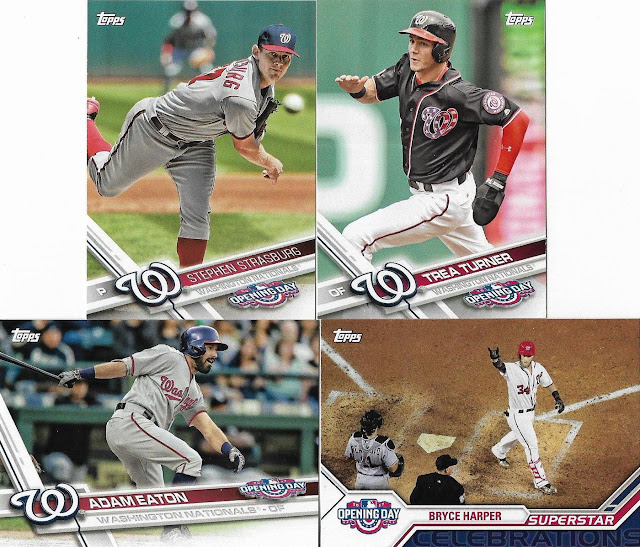 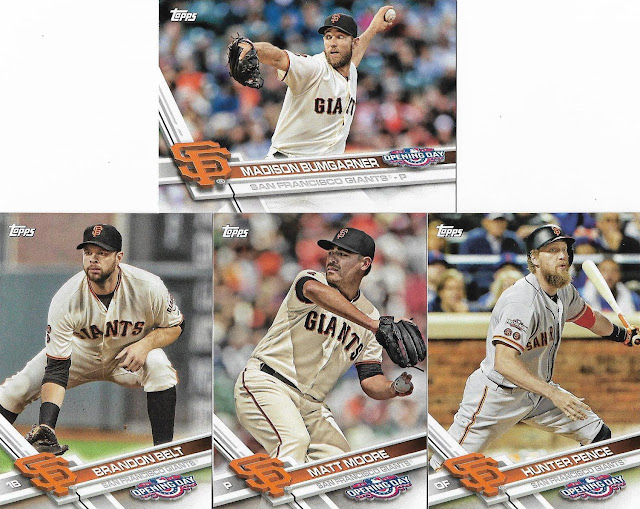 8. SAN FRANCISCO GIANTS (4 cards): I was watching the MLB Network yuck-yucks discuss Bumgarner's "unfriendliness" on the mound, discussing how he never smiles and always looks mad. But instead of coming out saying, "he's kind of a jerk," they said the reason for it is, "he's a true competitor". Yeah, that's it. 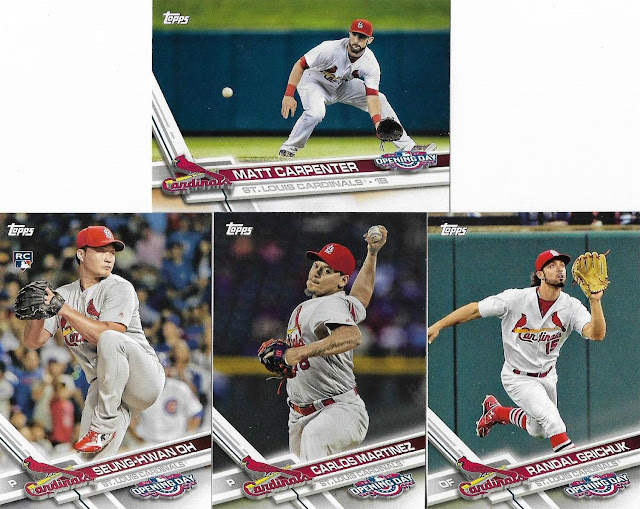 9. ST. LOUIS CARDINALS (4 cards): Being on vacation means you get to see stuff like Matt Carpenter's bloody hand after fielding a ball at first base LIVE. 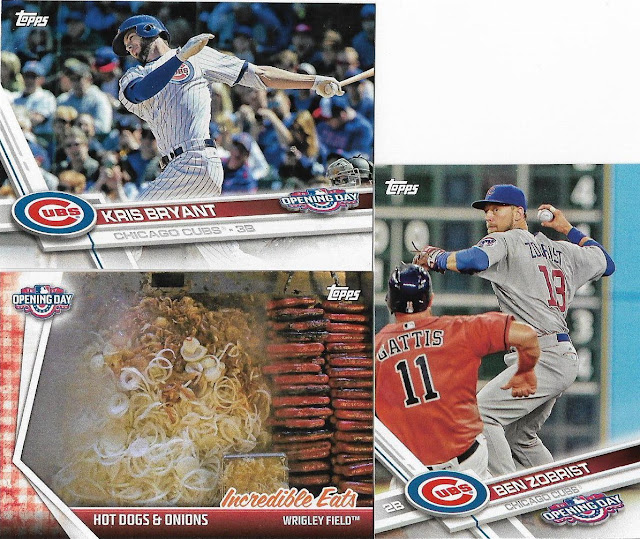 10. CHICAGO CUBS (3 cards): Seeing greasy food cooking gives me flashbacks to when I worked the hamburger joint in college. I smelled of grease at all times. It was not fun, girls didn't want to come near me, and I lasted three months. 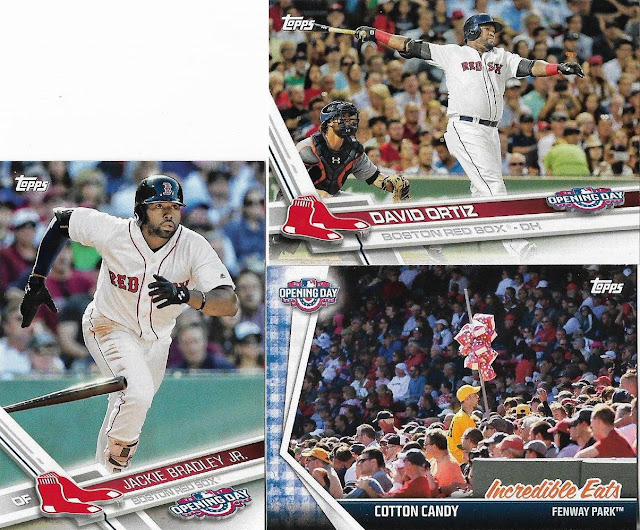 11. BOSTON RED SOX (3 cards): I'm told that what the vendor is selling in this photo is popcorn and not cotton candy. Not being a regular at Fenway Park, I can't tell the difference from the picture but I'll defer to the guy who lives in Section 36. 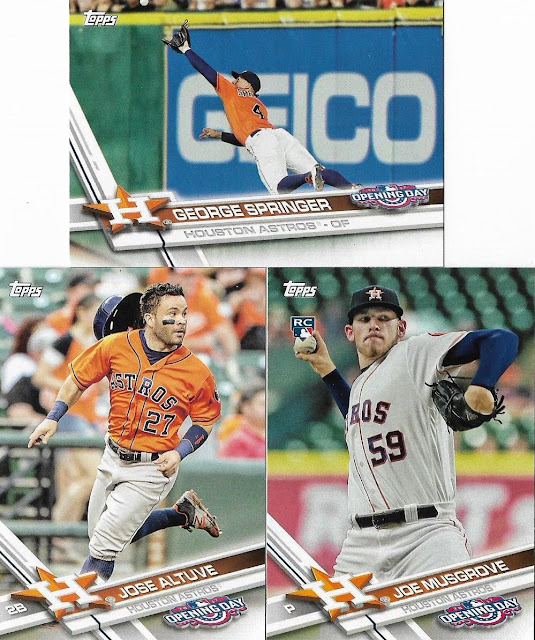 13. HOUSTON ASTROS (3 cards): The little rookie card logo is getting ready for a ride to home plate. 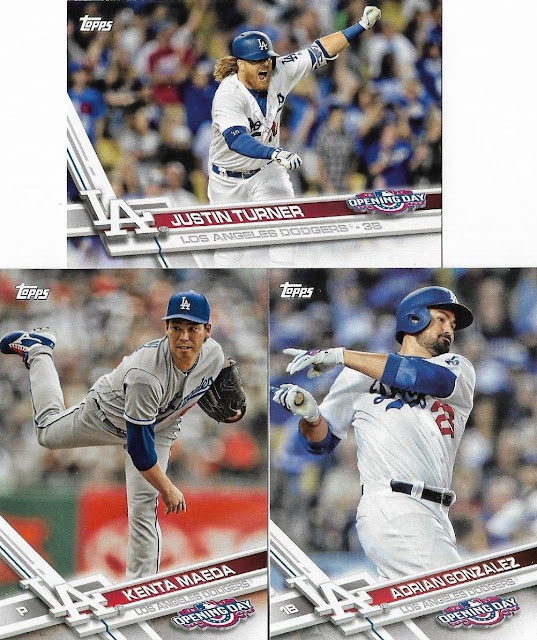 15. LOS ANGELES DODGERS (3 cards): The Dodgers are ranked lower than other three-card teams only because I have the Gonzalez already. 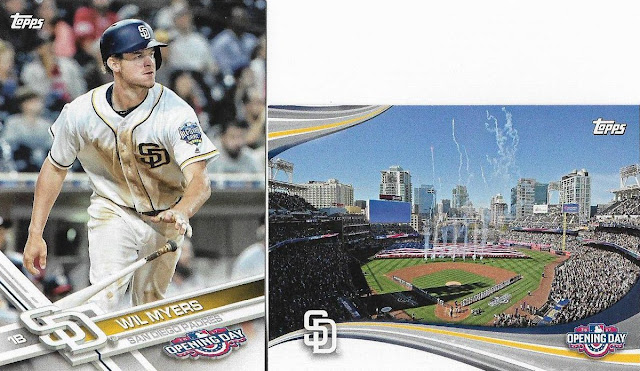 16. SAN DIEGO PADRES (2 cards): The Padres' Opening Day card my be my favorite card from 2017 Opening Day. It shows opening day festivities before the Padres' game against the Dodgers on April 6, 2016. The Dodgers proceeded to win 15-0, handing the Padres the worst opening day shutout defeat in major league history. I love this damn card. 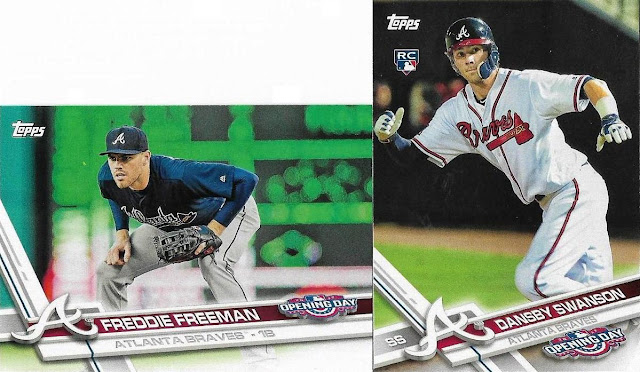 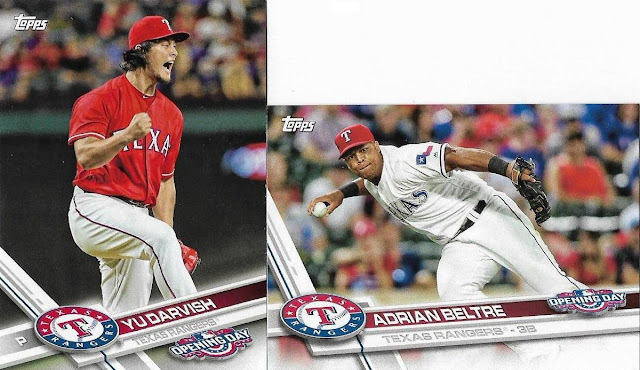 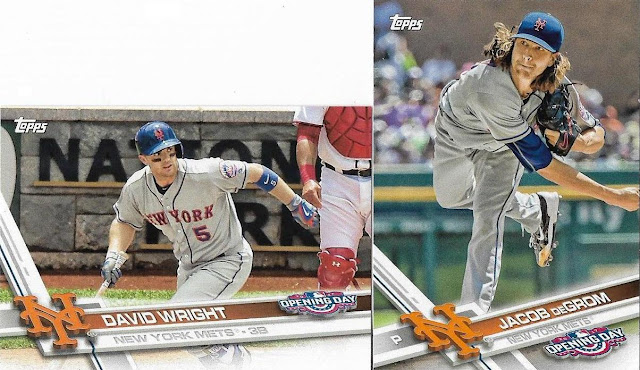 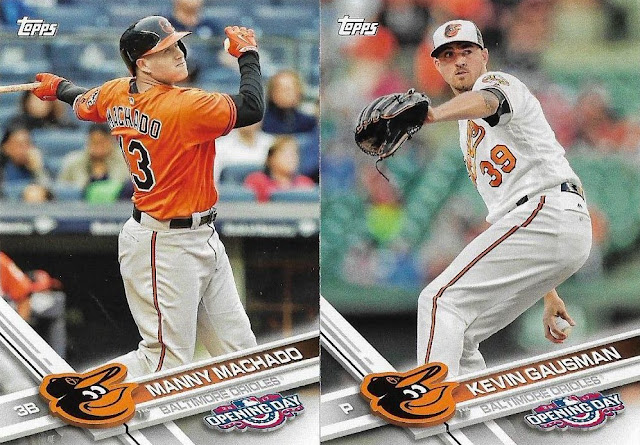 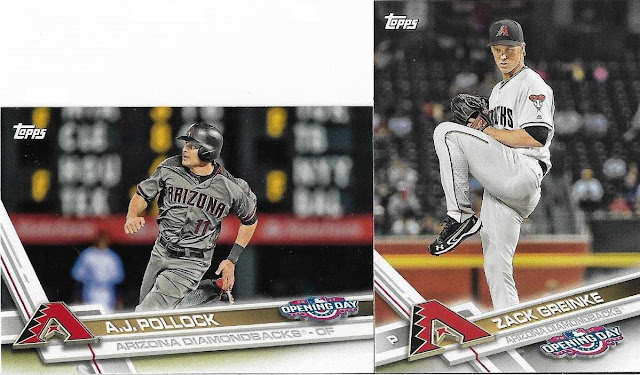 21. ARIZONA DIAMONDBACKS (2 cards): The gray uniforms with the blue lettering the Diamondbacks wore over the weekend may be the worst baseball uniforms I have ever seen. 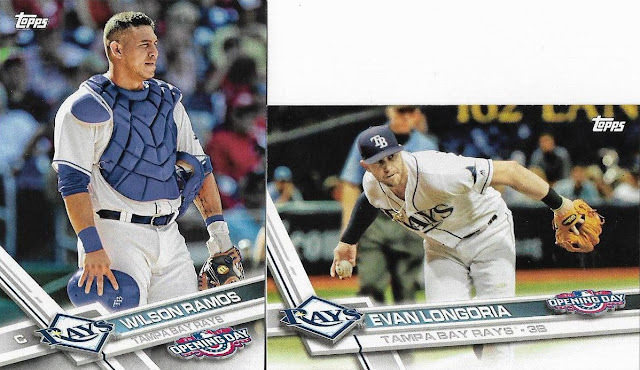 22. TAMPA BAY RAYS (2 cards): I don't envy any photographer who has to shoot in Tropicana Field. 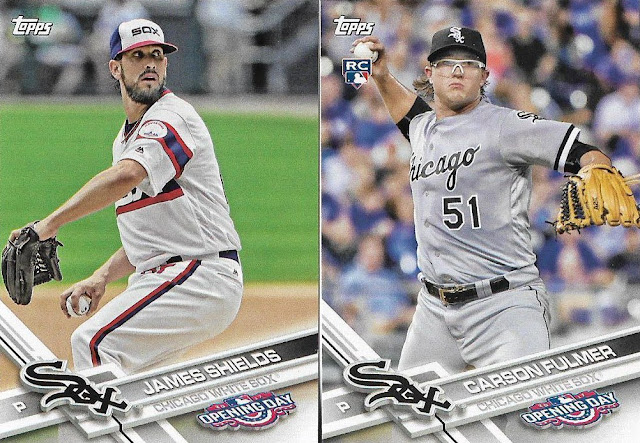 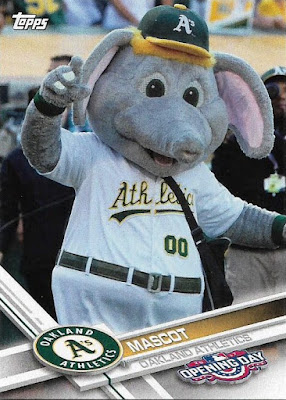 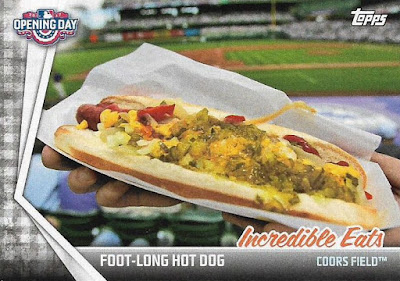 25. COLORADO ROCKIES (1 card): The one Rockies card is a hot dog, which means it's my all-time favorite Rockies card. 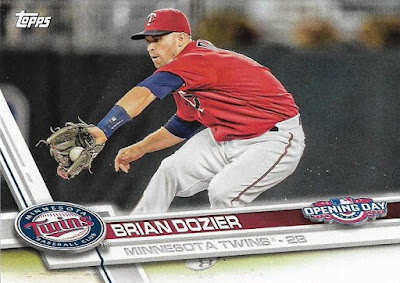 26. MINNESOTA TWINS (1 card): I pay more attention to Dozier since he wasn't traded to the Dodgers.

27. SEATTLE MARINERS (0 cards): Nor do I expect to get any Mariner cards.

28. PHILADELPHIA PHILLIES (0 cards): I watched them for the first time this season yesterday. They're sloppy.

That was a lot of scanning. I did that so my fellow traders could see the cards they were going to get. I don't plan to hang on to any of these besides the Dodgers (and probably that Padres Opening Day card).

So those are the Blaster Power Rankings to start it off. I know I'll be buying a Heritage blaster (ahem, "value box") soon, so that will probably be my next series of power rankings.

Power rankings may be mindless, but that only means it's ideal for a guy writing a card blog. I can't think of a more mindless pursuit than that.

Adam said…
I've been on the lookout for the card featuring GABP! Nice to see the Reds get a bit of love but boo for there not being one, single, solitary Tribe card in the box.
April 20, 2017 at 8:52 PM

CaptKirk42 said…
I try to look at the power rankings for the various leagues. I don't do it too often with the sites that just have to put each ranking on a separate webpage to click through their picture gallery to waste time and bait clicking. Yeah most of them are based on the likes of the person putting the list together. They tend to take the "safe route" by going with the traditionally competitive teams especially at the beginning of the season, no matter which teams started getting hot at the end of the season before or showed major improvements during the pre-season to set themselves up for an outstanding season, or if the traditionally competitive teams have sucked for the last 5-10 years.
April 21, 2017 at 12:52 AM

Anonymous said…
As a Mets fan, I'm happy that David Wright no longer represents the team in every single insert set, as was the case for a while. I love the guy, but it's nice to be able to pull someone else for a change.

The "competitor" comments are hardly anything new. I can think of a particular baseball "legend" who was described as "fiery" and "scrappy", to which I always responded "...or maybe he was just a putz?"
April 21, 2017 at 7:58 AM