March 25, 2017
(Greetings on "Waffle Day". A week or so ago I read about somebody putting brownie batter in their waffle maker and I haven't been able to think about anything else since. It's time for Cardboard Appreciation. This is the 253rd in a series): 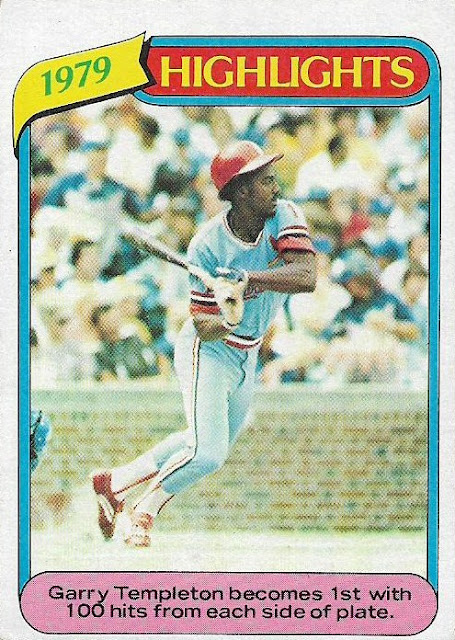 Yesterday was Garry Templeton's birthday. Ballplayers' birthdays are always a nice occasion to dig out the birthday boy's card and showcase it on social media.

I chose this particular card because everyone had already shown the rookie cup Templeton card and because who doesn't appreciate the very cool stat of one player getting 100 hits from each side of the plate in a single season?

I've known about Templeton's feat since it happened, it was kind of a big deal. And the record breaker card always helps hammer the achievement home in my memory.

I started to wonder what other switch-hitters had achieved 100 hits on both sides of the plate since Templeton. I had known that Willie Wilson had accomplished the feat the very next year but never heard about anyone else doing it.

So I did a little bit of online research and found out that Templeton wasn't really the first player with 100 hits on either side of the plate, because he never actually achieved it.

If you check out the splits on Templeton's baseball-reference page, you will see that he managed just 96 hits as a right-handed batter in 1979. 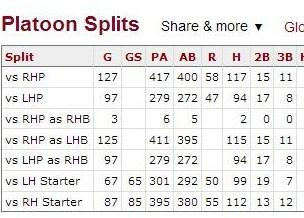 Why the discrepancy? Well, according to this thread, they didn't count the hits up so well in 1979. Someone informed Templeton that he had 93 hits as a right-handed batter when it was really 89. Templeton started batting right-handed every at-bat to achieve the mark (a move that didn't endear him to the next Cardinals manager, Whitey Herzog), and according to the back of his 1980 baseball card, he reached 100 hits as a right-hander with a bunt single. 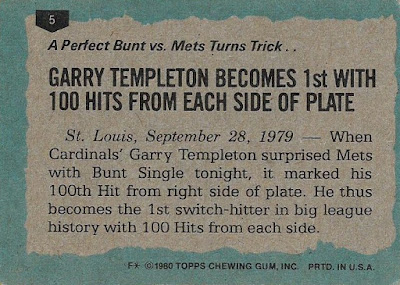 Except that he didn't. It was really his 96th hit from the right side of the plate.

I don't know what goes into the statistical gathering with baseball-reference and retrosheet.org, so I can't say that baseball-reference's stats are 100 percent accurate. But let's face facts. We are far more efficient and fanatical in gathering baseball stats than we ever were in 1979.

The thing that blows my mind is how this was considered absolute fact when it happened and for many years. And Templeton has been credited for the achievement on many a baseball card.

So, not only is the 1980 Highlights card incorrect, but so are the backs of many of Templeton's cards. 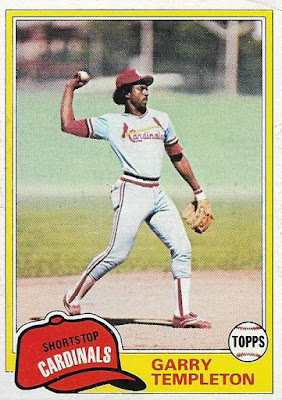 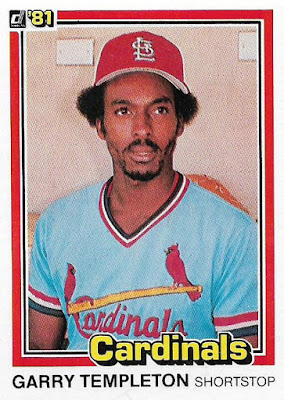 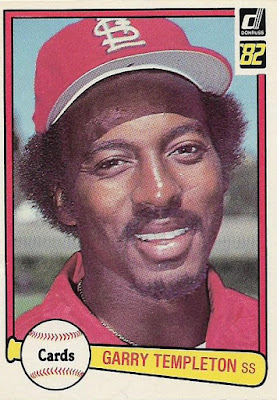 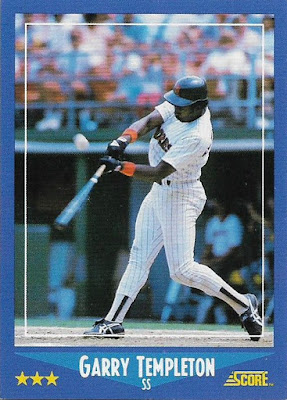 And there are many more. 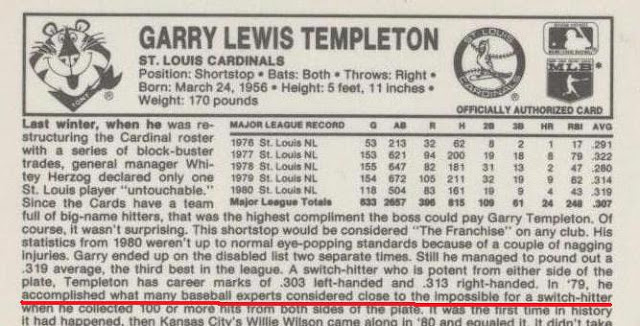 Damn right, it's close to the impossible, 1981 Kellogg's.

All of the above cards jumped the gun. Templeton never had 100 hits as a right-hander in a single year. 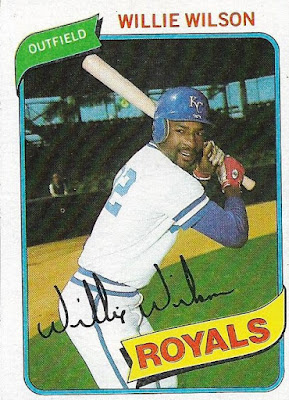 So that means Willie Wilson, who in 1980 was reported to have reached 100 hits from each side of the plate as part of the 230 he accumulated that year, is the first person to accomplish it, right?

According to his baseball-reference splits, Wilson came up a single hit short on the left side. 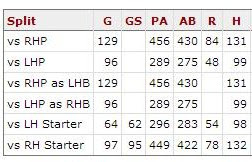 This is staggering to me. Not merely from the standpoint that I thought all these years that Templeton and Wilson had achieved this, but that it was discovered to be not true and nobody really said anything about it.

When Templeton achieved the feat, it was trumpeted in the newspapers and magazines and a baseball card was made. You can read mentions of it in published books, for crying out loud.

But virtually no mention of "never mind, that didn't happen." Shouldn't MLB or the media or someone have said something?

Looking online, I see virtually no mention of this feat never happening. And it's funny that among the more noted baseball sites and news publications, achieving 100 hits from both sides of the plate is barely mentioned. It's like nobody cares today.

I think that might be because nobody has achieved the mark. I can't find anyone else mentioned besides Templeton and Wilson.

It's funny how certain baseball stats can be so trumpeted and almost sacrosanct for years and then with the passage of time, they are ignored, not even to mention whether they're true or false. 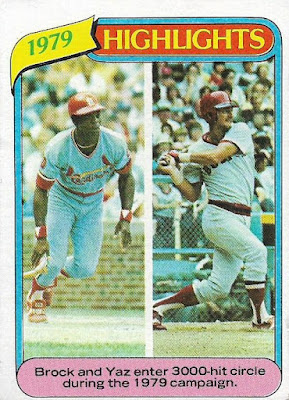 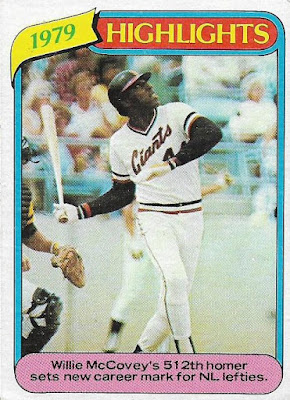 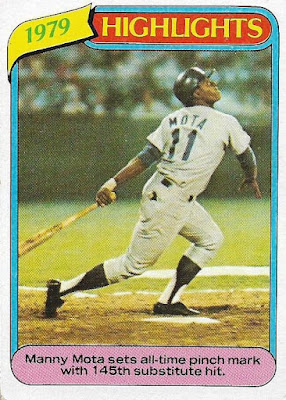 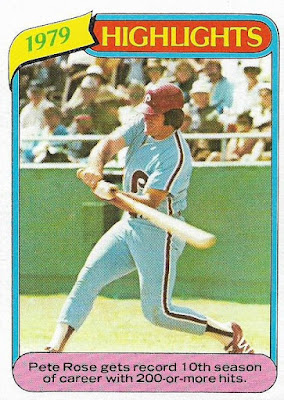 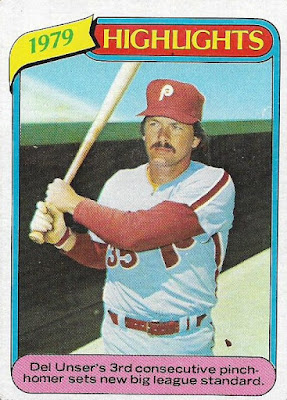 So what is it about these other 1980 Highlights card that isn't true (I'm already aware that Mota doesn't hold the all-time pinch-hit record anymore)?

I don't think I want to know.

steelehere said…
I'm surprised that Pete Rose never accomplished this feat considering how self-absorbed he was into his own achievements.
March 25, 2017 at 8:22 PM

Seems like someone in '79 would have done better research into this as Templeton approached the 100/100 Club threshold.

gcrl said…
I remember when cobb's 4191 hits became 4189 hits well after we all celebrated Pete Rose's 4192 and I thought for sure that Elias wild at some point discover that Lou gehrig missed a game somewhere early on in his streak.
March 26, 2017 at 12:57 AM

gcrl said…
Elias would at some point...

Stubby said…
Definitions keep changing. Base-on-balls, in olden days, were lumped in with hits in determining batting records. And, for example, there was no such thing as a "Save" prior to 1969, but Baseball-Reference includes the stat for pitchers whose careers were long done before 1969. How are we to know for sure that their retroactive computations are accurate? How do they know? Not only that, but the definition of a "Save" changed a few times between 1969 and 1975, but all the pre-69 pitchers' Save stats are based on the '69 rule (let's face it, the historians didn't want to go back and recalculate a second or third time; and I can relate). Even today, you'll occasionally see adjustments in stats after the fact. Someone inadvertently included a spring training hit or some such thing. But, when the season ends, whatever happened happened...even if it didn't. No one wants to go back (excepting, perhaps, a player negotiating a new contract) and declare that the guy who won the batting title actually didn't. So Gary Templeton DID get 100 hits from each side of the plate...even if he didn't. Because, at season's end, it was *believed* that he had done so. And baseball cards don't lie...even if they do.
March 26, 2017 at 5:11 PM

night owl said…
I think the part that intrigues me is that Templeton was mentioned as the FIRST to do it when in fact it actually has never been done. So when someone actually does get 100 hits from both sides of the plate, won't that be an interesting story?
March 26, 2017 at 8:37 PM

GCA said…
Well, I see where you can definitely say Templeton fell short. There are stats for him as right and left batter vs. right and left pitchers (of all types). All four combos are accounted for.
But that group of stats for Wilson is incomplete. He could have had more hits batting right against right-handers. That's not listed anywhere there. You can't necessarily assume that he always batted the opposite hand of the pitcher.
March 27, 2017 at 8:49 AM

night owl said…
I'm not sure I know what your saying. Wilson had 230 hits in 1980. All of his hits are accounted for in that left vs. right/right vs. left breakdown. Even if there's a category missing (and perhaps the category is missing because that matchup never happened), there would be no hits to account for in that category.
March 27, 2017 at 9:14 AM

Classon Ave said…
Is it possible that the Cardinals kept better internal stats than the kid in the press box, at least as far as what side of the plate he was batting from? W
March 27, 2017 at 11:36 AM

acrackedbat said…
brownie batter in a waffle maker? i saw nothing else after reading that. arghh!
March 28, 2017 at 3:31 PM