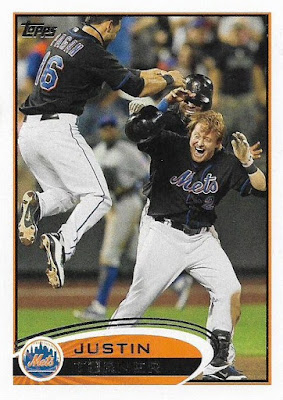 Here is a card featuring a couple of players celebrating (actually there are three, but for our purposes it's just two).

Little did we know at the time that this card was created that one player would go on to be used for good and one be used for evil. Justin Turner is now manning the hot corner for Dodger Blue, while Pagan has been his annoying, unsmiling self for the Giants for seemingly forever.

Neither of these players purposely chose to go directly to my favorite team and least favorite team, respectively. But it brings up something in sports that I often think about: the separation between the players playing the game and the fans watching the game.

We fans have all kinds of ideas, beliefs and perceptions about the teams we see play everyday. Each team has a personality, and that personality continues year after year for fans. Depending on your perception, the Cardinals are adorable and the best manifestation of "baseball done right" that's ever existed, or really irritating and full of themselves. And there are various levels of evil and good depending on your favorite team and division.

Players, meanwhile, don't see that. They may have seen it in the days when more players stayed with the same team throughout a career. Or before money became the deciding factor in where a player plied his talent. But, I think, overall, players don't get into the game the way fans do. For them, every team is essentially the same. There is no "evil empire" or "Cubbies" or "baseball's best fans." There are teams they want to play for and teams they don't. And those reasons are pretty much limited to team success, money, and the city where the team plays.

In a way, it's kind of sad that they don't see the conceptual stuff we do. To me and many others, that's what gives the game personality, what makes it fun. But I guess they have their own fun -- they play the game for a living.

Which is why I can't BELIEVE Turner is celebrating with Pagan on that card.

Night Card Binder candidate: Justin Turner, 2012 Topps, #163
Does it make the binder?: Yes. It boots out this card: 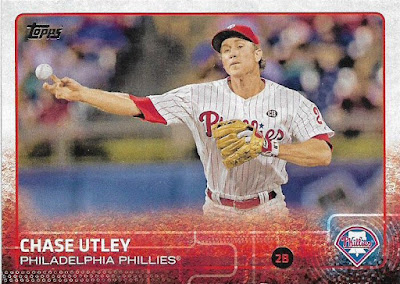 Big Tone said…
I see It a little differently.I think that guys go to teams that will pay them the most, but I also think they know that swagger comes with being a Yankee and Beards go hand In hand with being a Red Sock.I think they know, and then even take on that teams persona.It has alot to do with who's managing as well,imo.
March 14, 2016 at 2:52 PM

Unknown said…
I read a recent mailbag article from Cubs reporter Jesse Rogers that featured questions fielded to Jason Heyward. One of the questions was if he sees the rivalry between the Cubs and the Cards, or if it is all the fans, whereas he said that the team doesn't see it. They see a team that they need to beat to progress throughout the season, that's it. As seen with the Cubs signings this season, it also isn't always about the money, it's about the location or the team, as Heyward, Zobrist and Lackey all took less money to go to the northside (opt-outs and other contract details notwithstanding) for any mixture of staff (Zo worked with Maddon for years, Lackey worked with Maddon, Lester and Ross, Heyward saw a younger team and a chance for a ring, among other things).
March 14, 2016 at 3:12 PM