December 21, 2015
I'm sure you've seen many posts over the last few weeks from collectors featuring what they bought on COMC on Black Friday weekend.

COMC hosts its best deals of the year that weekend, from what I hear anyway. And lots of people -- who are very on top of the latest "thing to do" -- pounce. It's actually very smart, lots of money to save, free shipping, etc.

But I'm not nearly that together. I am never in any shape to buy cards on COMC on Black Friday. It's usually a day for some family activity or recuperation. Two years ago, I was in a bowling alley with lots of babbling nieces and nephews (OK, one of them was my own kid). Last year I was dealing with the final days of my mother-in-law. Today, I was driving home in a haze very desperate to get some sleep. The sales -- again -- passed me by.

However, I love cards and I love COMC. So about two weeks ago, I placed a small order with some money I had budgeted for Christmas purchases that it turns out I didn't need -- woo-hoo, cards!!!!

Here is what I grabbed. Prices weren't slashed. I paid the regular shipping amount. Yet, the cards are just as cool. 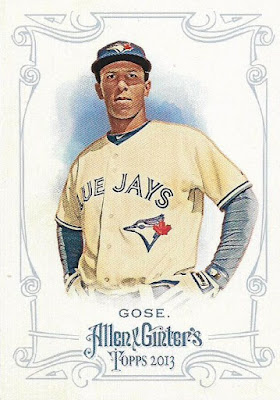 I'll start with the embarrassing first. This is the final card I needed to complete my 2013 Allen and Ginter set.

Yes, I said I had completed that set four months ago (with a collection of cards purchased that looks very similar to this one, by the way). I didn't know what I was talking about (a common theme in my life, almost as common as my use of parentheses). When I discovered that I was one card short of the set, and that card was a rather common card, number 24, I made the face that Anthony Gose is making right now. Then I put the card in my cart. This card was in the cart the longest -- laughing at me. But the set's complete. 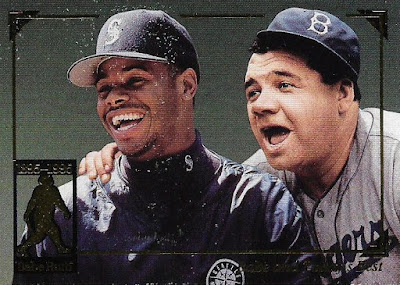 From the moment I saw this card on Junior Junkie's blog, it was a "must have" card. Babe Ruth in a Dodger uniform? With Griffey??? Why? Why?? Wh-wh-wh-why? Ruth's hand is on Griffey's shoulder???? Wuuut? Almost nothing about this card computes. Which is why I had to have it. That and Ruth looks all the way in the bag.

As you can see, I don't mind "snow" on my cards -- that will be very apparent later in this post. The most annoying thing about old '90s cards for me is how they feel clammy when you take them out of the sleeves. Ewwww. It's not quite as icky as my other weird hang-ups, but ewwwwwww. 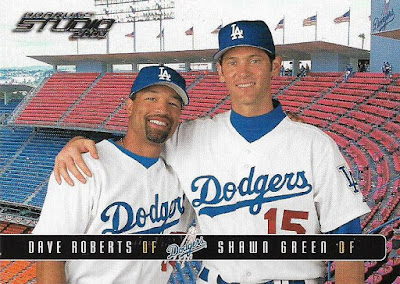 I told you I'd be getting this card of the current Dodgers manager. Studio thought so little of Dave Roberts that they made him share his card with Shawn Green, who of course had another card of his own in the set. This is typical of the "superstars" sets that plagued the previous decade. But at least it produced this very humorous item-- Green letting the new Dodgers manager onto his card. 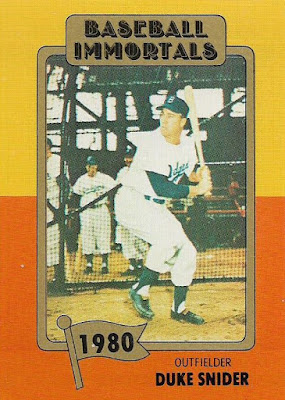 It's pretty terrible that I have so little money and so many wants that I nabbed just a single Baseball Immortals card in this purchase. I WANT ALL THESE CARDS. It could be a mission in the next year.

The back of the card mentions that Dodger greats Duke Snider and Gil Hodges wound up with the Mets. And now I'm sad. 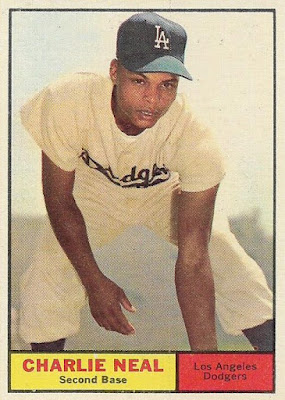 The next year is definitely a year reserved for devoting some cash to pricey early '60s Dodgers. I started a little early with a couple of 1961s. The final Dodger card of '59 World Series hero Charlie Neal was objective one. 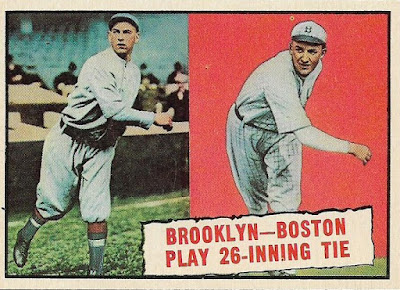 And before this card escaped from my consciousness forever, I grabbed it. This is from the '61 Topps Baseball Thrills subset, recalling the Dodgers' 26-inning game against the Braves. Where else are you going to find a card of Dodgers pitcher Leon Cadore? (OK, he's in the Target Dodgers set, a Famous Feats set, and on an American Caramel card from the '20s). 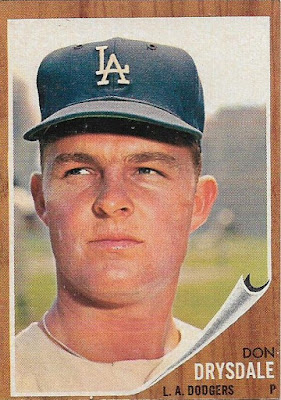 Had to get one from 1962 that was staring me down for awhile.

This very memorable card of Drysdale, the '62 Cy Young Award winner, is actually a repeat image as I'm sure many of you know. 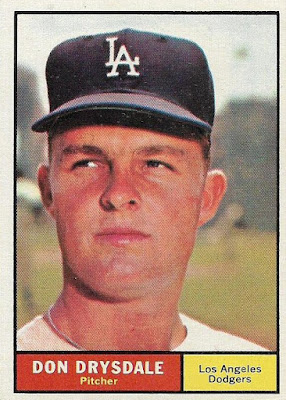 But this blog is for newbies, too. That's Drysdale's 1961 Topps card. Notice the sameness.

Interestingly, even though the '62 Drysdale had escaped my clutches for years upon years, not more than one week after it arrived in the mail, another one came in the mail from someone else (wait 'til you see that package). 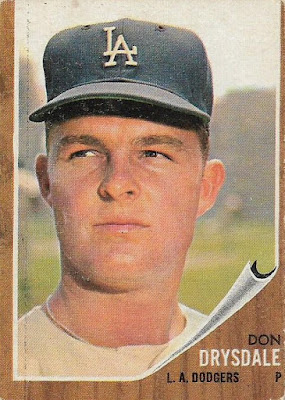 Here is '62 Drysdale with the top down. 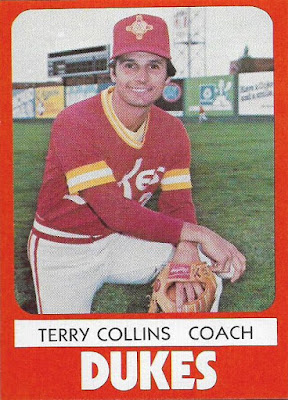 During the World Series, I suddenly remembered that Terry Collins had some cards back in his Albuquerque Dukes days. I quickly searched out my favorite version -- before cards of the Mets manager skyrocketed in value -- and grabbed it. Of course, I had to feature it on Twitter, just to amuse those very young people who discovered Collins the day before yesterday. 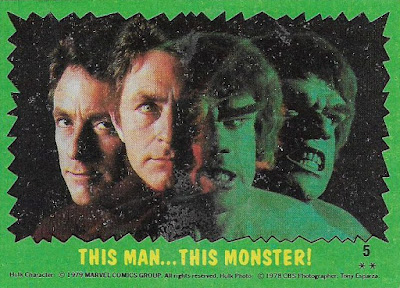 Last card. It's fantastic -- snow or no snow.

In my continuing quest to fill a page with cards from 1970s TV shows and movies, this Incredible Hulk card is my second choice. One of the best cards in the 1979 set.

Because it's a non-sports set from the '70s, there is a puzzle piece on the back: 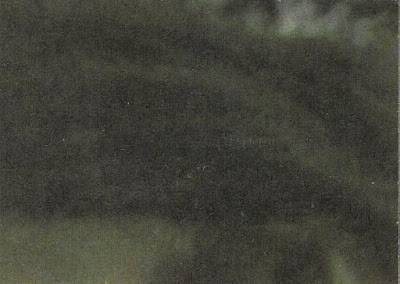 I'm not sure what that is, but I'm sure it's tremendously monstrous in a very '70s kind of way.

With the arrival of David Bruce Banner, this is what my '70s page looks like now: 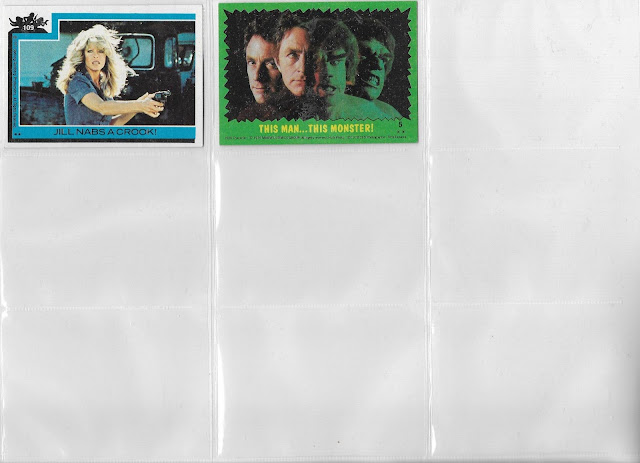 It's tilted on its side because both cards are horizontals. It probably won't stay that way and I'll shift the cards around as I see fit.

I'm not sure which card to add next, but I've already got my eyes on something from Close Encounters of the Third Kind.

Those purchases were all over the board, because that pretty much describes me, the night owl. Why buy the cards on Black Friday when you can buy them on Dec. 5th, right?

I'll get it together someday.

Tony L. said…
That Ruth/Griffey card legitimately freaks me out. The card needs a Rod Serling introduction.
December 21, 2015 at 8:18 PM

AdamE said…
My COMC purchases usually sit for months and months before they get shipped. Actually last time I got cards from them I waited so long the shipping was half off.
December 21, 2015 at 8:35 PM