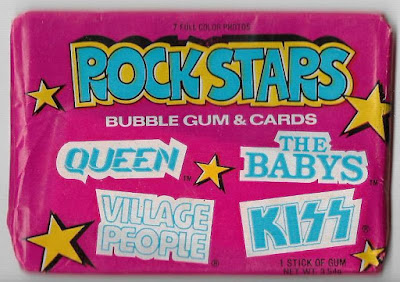 By '79, punk and disco had risen and fallen, given birth to new wave in the middle there, and was sharing the radio airwaves with what was left of arena rock. You can see what a confusing world it was by the four groups that pre-baseball Donruss included here. Queen was still rock, but branching out into a little bit of everything. The Babys, considered the next wave of rock at the time, was actually pop rock. The Village People was a dance club novelty act. And by '79 your parents had stopped hating Kiss because the band was so mainstream it was on the verge of selling cereal on TV. In fact, Kiss put out a disco record that year.

I know all this because I was 13 in 1979. This is what I grew up with. If Donruss wanted to be more accurate and relevant to the time period, it could have chosen a quartet of Led Zeppelin, Van Halen, Dire Straits and the Cars. But we all know the deal with licensing and entertainment acts, right Panini Americana? You get what you get and you'll like it.

I received this pack from Brian of Highly Subjective and Completely Arbitrary. I imagine he came across it at the National. Since I've professed my interest for anything musical on cardboard, this is what happens.

I'm opening this. I'm not expecting anything comfortable. If we can please get through this with one card of Freddie Mercury, it will be a success. 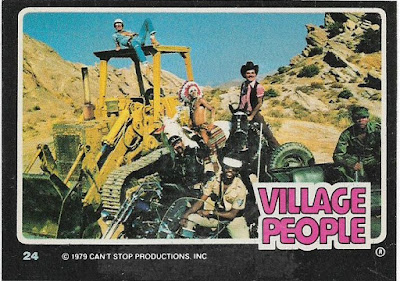 I don't remember that many village people in the Village People. I also need the construction worker to sit up straight. 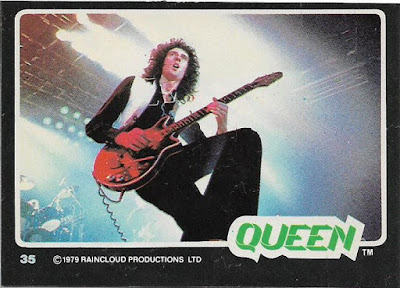 Brian May playing his homemade guitar. OK, Donruss, you rock at least this once. 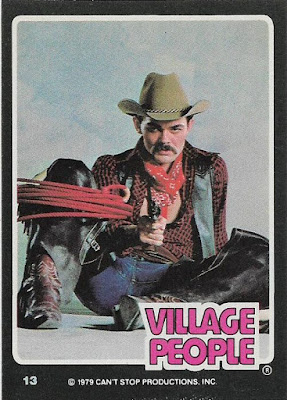 Ummm ... I'm quite disconcerted about where Randy is aiming that gun so let's turn it over to the back: 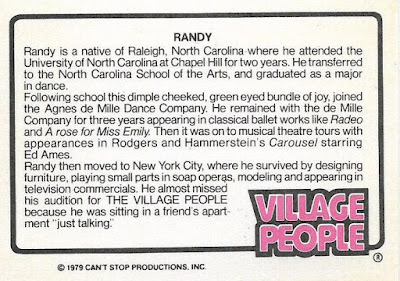 I don't know if Donruss wrote these things, but if so they are to be commended for getting into the spirit of the thing. 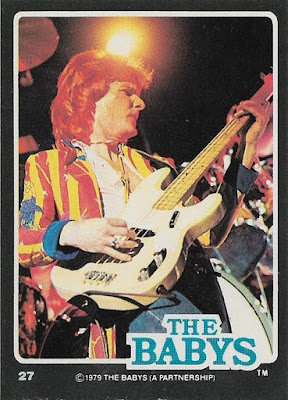 This is bass player Ricky Phillips. I only know that because I read the back. He apparently joined The Babys late in their success. 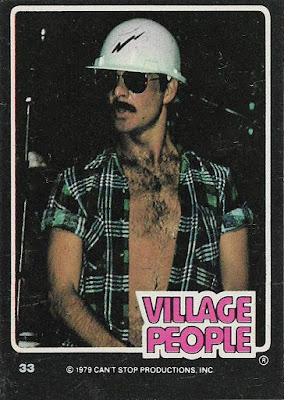 Three of seven cards are the Village People. Great set. So I guess the construction worker, judging by his helmet, works on power lines? 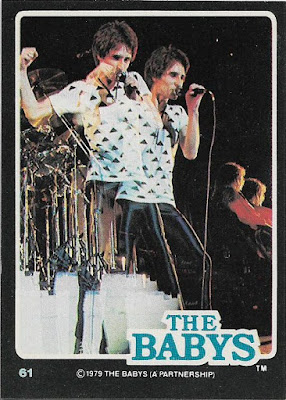 That's lead singer John Waite, who would go on to take MTV hostage in 1984 and force them to play nothing but "Missing You" for an entire year. 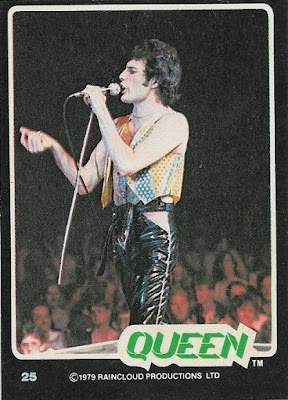 Freddie! (These cards are woefully miscut, and therefore so very '70s)

At least four of the cards in this set feature people who didn't like girls in that way. It's interesting that Donruss was marketing a product with so many gay singers in 1979. Not that anybody buying these cards (did anyone buy these cards?) knew it at the time. 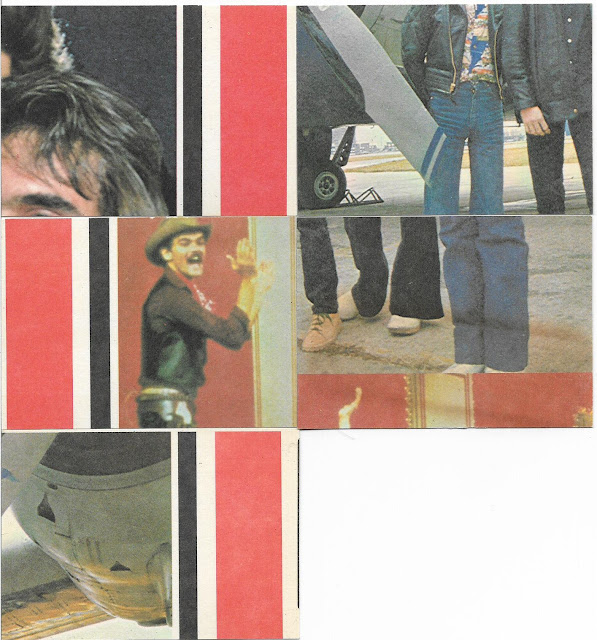 A prerequisite for being a 1970s non-sports set was to feature puzzle pieces on the back. Those are them.

You'll notice that I didn't get a single Kiss card. (I'm thinking this pack was searched and resealed before Brian got to it).

But I did get gum that doesn't look that bad for being 36 years old.

Jamie Meyers said…
Not all the Village People were/are gay, despite the group being basically poster children for that segment of the population in the late 70's. That Brian May card is awesome. Of all the rock bands out there at that time, the Babys seem like an odd choice. Maybe they were like a rookie band that didn't necessarily pan out, though as you mentioned John Waite had a monster smash and actually keyboardist Jonathan Cain wound up playing on many monster smashes later on as part of Journey.

RAZ said…
This is a cool pack to watch someone else open. Weird mix of bands in this product; reading this post made me feel a little out-of-sorts and disoriented.
August 21, 2015 at 11:45 AM