August 16, 2015
(We are in the midst of home renovations right now. I've been living without a TV for the last few days and finding -- as I suspected -- that I don't need it, which brings me to tonight's Cardboard Appreciation. This is the 229th in a series): 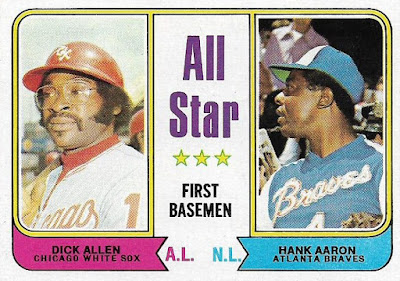 The last few nights after coming home from work, I've been watching the 1974 All-Star Game on youtube.

As you might suspect, if you are my age, it was fascinating. I switched it on because I wanted to see the players that I've known from the 1975 Topps All-Star cards in action, the players I watched as a kid. But I saw so much more than that, from the players I never saw play live -- like Dick Allen and Hank Aaron here -- to so many elements of that time that I've forgotten or never knew.

Here is what I took away from that game, won 7-2 by the National League, by the way:


Anyway, it was a great time waster and a little more enjoyable than watching past World Series games, which seem to be wrapped up in too much angst.

And for indulging me with a bunch of reminiscing, here is the puzzle on the back of the 1974 All-Star cards: 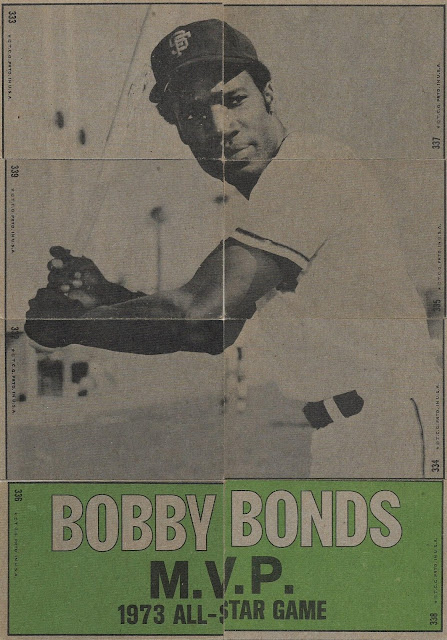 Don said…
I watched the 71 all star game on mlb network a few years ago. The announcer's reaction when Reggie hit his Homer was priceless. I enjoyed seeing Clemente and Marichal play as I had only seen them in highlights before.
August 17, 2015 at 12:20 AM

AthleticGigantes said…
When I'm playing the role of a "night owl" at work during the off season, I listen (not watch) to a full game from the 60's, preferably the 70's. There are many such games on Youtube and it keeps me from missing the game during the winter

I do enjoy listening to those games because I don't know the outcome, even though I could certainly look it up in the record books.

I especially enjoy the games from the 7p's era as this was the.time I collected the cards and it's just fun to hear the players name brought.to ME by Murt, Joe and Tony. I miss their voices and commentary.

Try listening/watching the World Series games. My favorites: 1972-1974, but those late 70's and the Series.with the Big Red Machine are great. Take a listen to the playoff games too. There are many great moment to relive.

AthleticGigantes said…
Apologies to Kurt, not Murt, Gowdy fans out there. Still don't have the ease in using this small keyboard that a12 year old has on an iphone.
August 17, 2015 at 1:28 AM

MJ said…
I remember watching this All-Star game live in '74! I was only six, but I remember sitting with my Dad and him telling me to listen to the crowd go crazy when any Pittsburgh players were introduced at the beginning of the game. I remember being disappointed that there was only one: Ken Brett, and the cheers didn't seem any louder than for the other players. I'm pretty sure I let my Dad know I knew that Brett was a former Red Sox player, a fact I picked up from the back of his cards.
August 17, 2015 at 9:51 AM

Commishbob said…
The Curt Gowdy/Joe Garagiola/ Tony Kubek team meant baseball to me for many years. I was particularly a fan of Gowdy. I was pretty upset when NBC squeezed him out of the booth and was happy to hear him do radio with Ernie Harwell for awhile.
August 17, 2015 at 2:01 PM