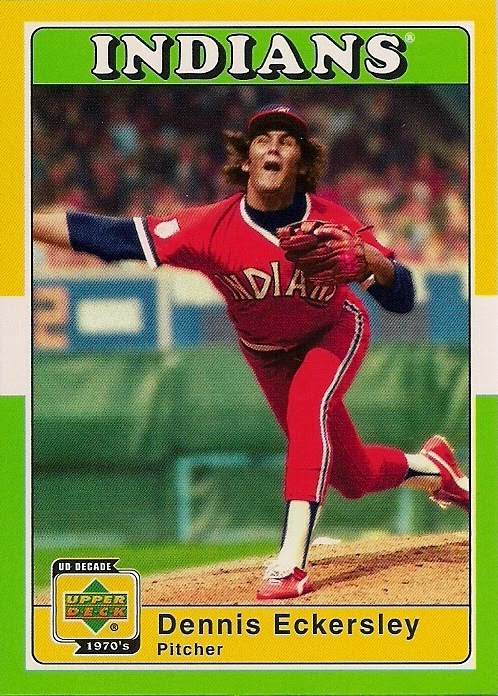 It's the end of March. Every year at this time I look around, do a quick inventory, check myself in the mirror, and celebrate that, yes, I am still alive. The month didn't kill me.

This year I had resolved at the start of the month that I would not let it get to me. And then a different firecracker went off in my face for the next 31 days.

But that's over now. Here we are -- as this fiendish month draws its final breaths -- still going. I recognize that fact each year by acquiring a few celebratory cards. Just a few, because who has time to scope out a palette of cards in March?

The cards arrived the other day and you'll see them in several different posts, but right now I want to show the ones that most make me smile. Because March is dying, dammit, and I'm ready to smile.

I decided to make an effort in my quest to complete the 2001 Upper Deck Decade '70s set. But except for the above absolutely amazing Dennis Eckersley card, I didn't end up picking up any base set needs.

No, instead I went for the brightest and loudest cards -- and headed straight to the inserts.

There are several different insert sets in UD Decade '70s, because of course this isn't really the '70s, it's the 21st century and, oh, yes, THERE WILL BE INSERTS. 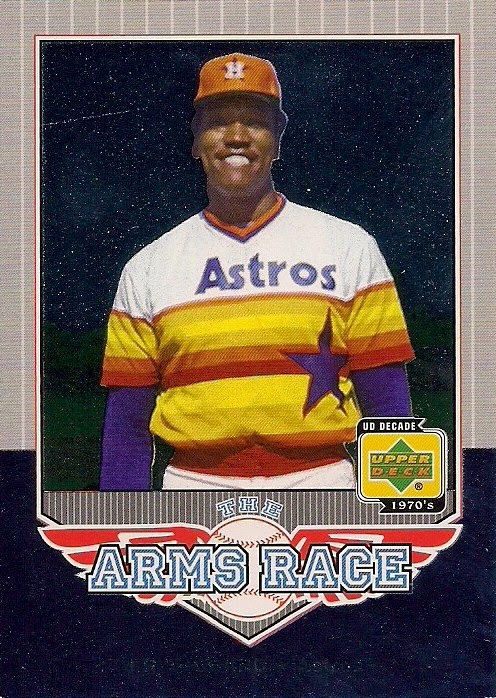 This is from the insert "Arms Race". I grabbed just one card from that set, only because I wanted the J.R. Richard card. These don't scan that well, because the background is shiny -- another clue that this set has just as much to do with 2001 as the '70s.

The two inserts sets that I like the best are the two most colorful. And I decided to complete each of them. 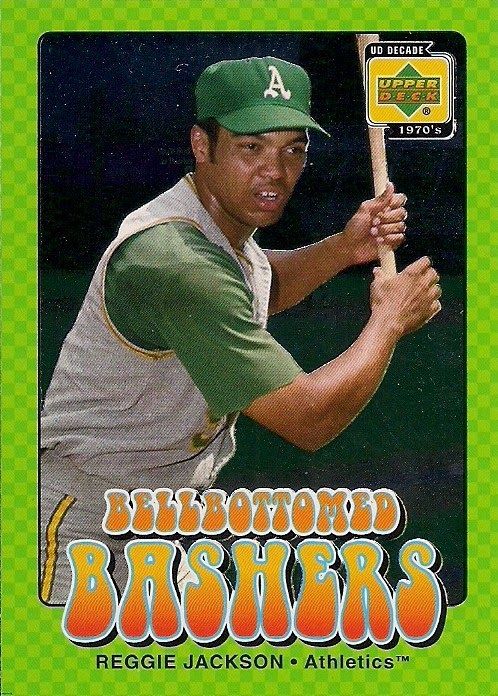 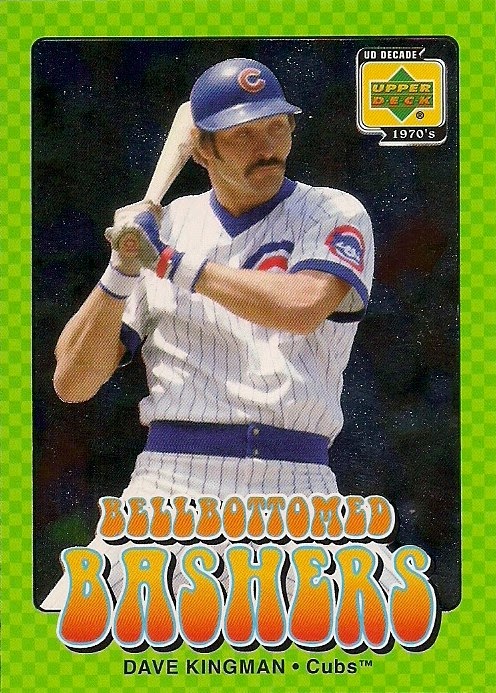 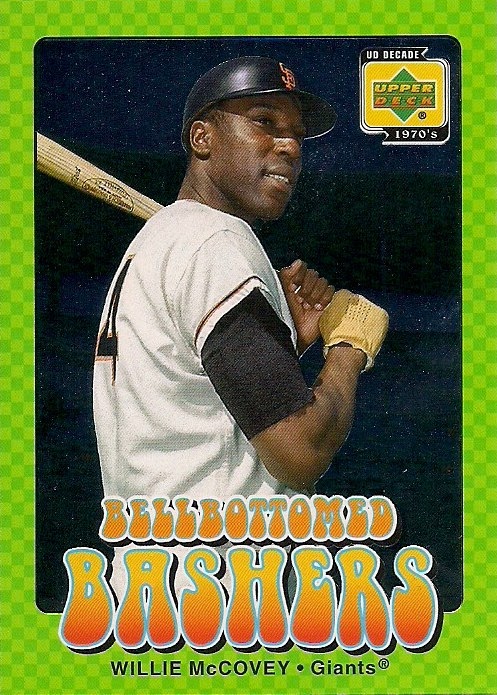 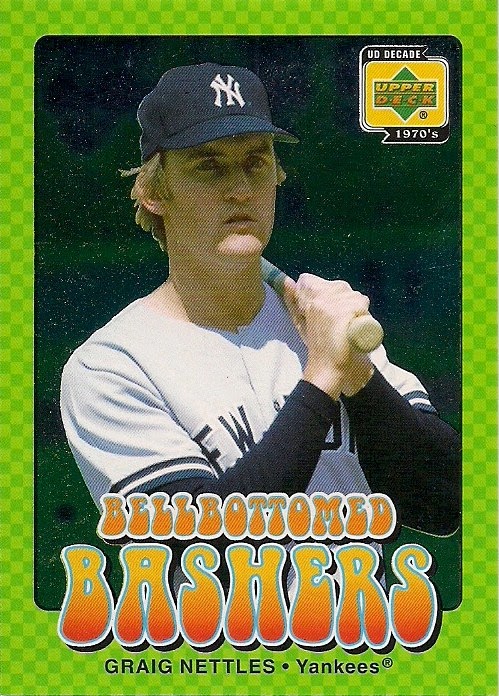 Those four cards allowed me to complete the set. Here it is: 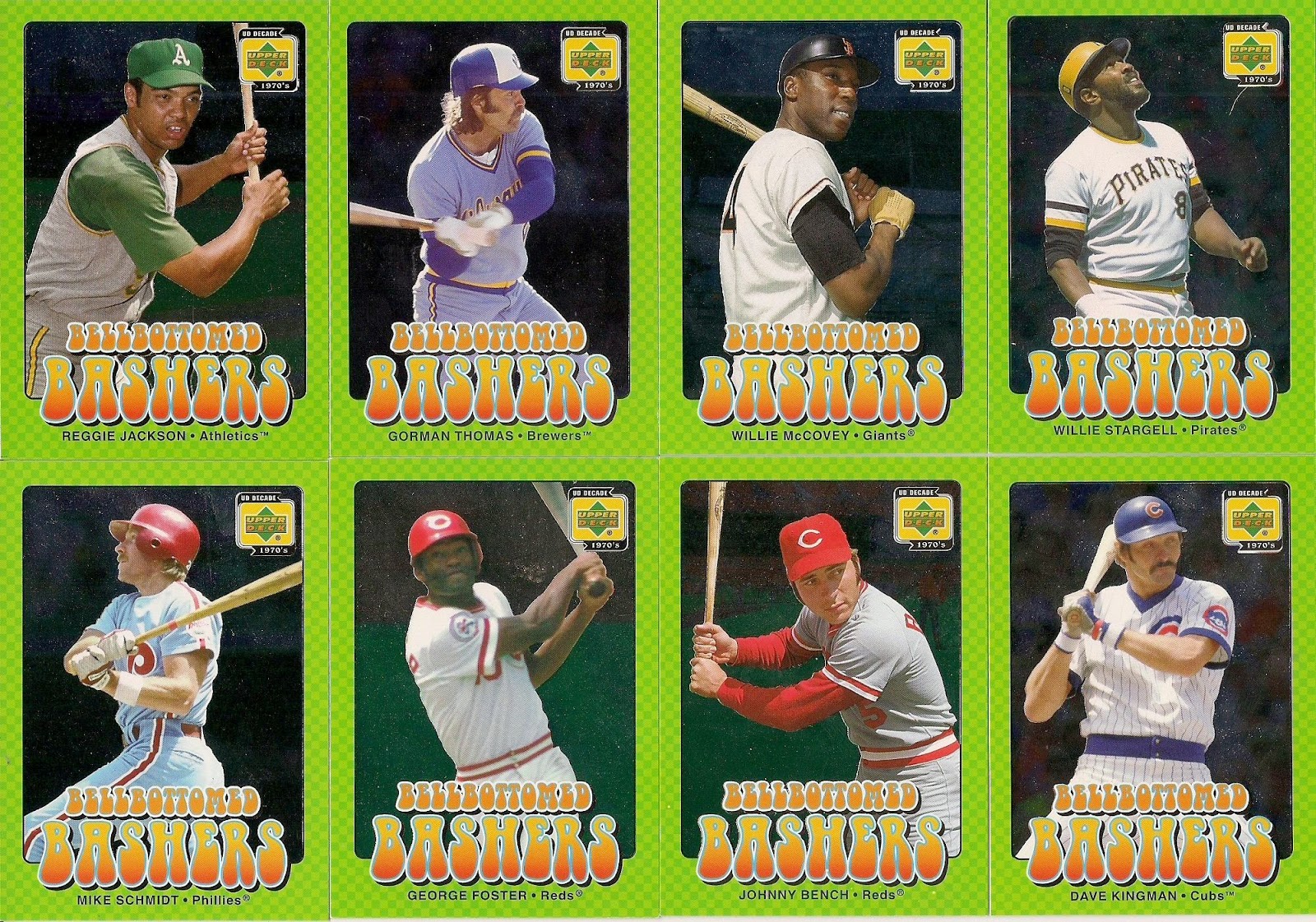 That covers the entire slugging spectrum of the '70s, from the early years (McCovey and a very young Jackson) to the end of the decade (Thomas and Foster).

But my favorite insert from this set is one of the brightest sets of all-time. And I landed three of those cards: 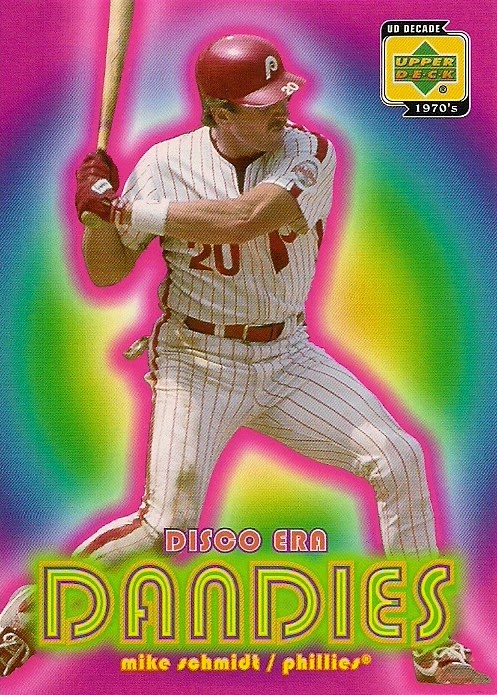 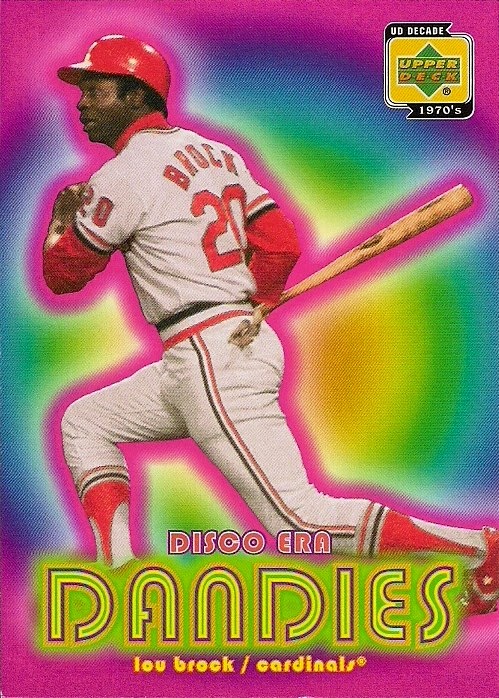 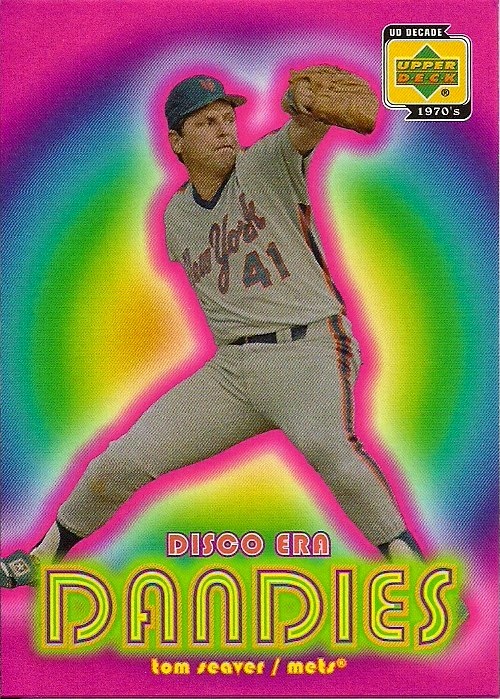 Those three cards allowed me to complete that set. Here it is: 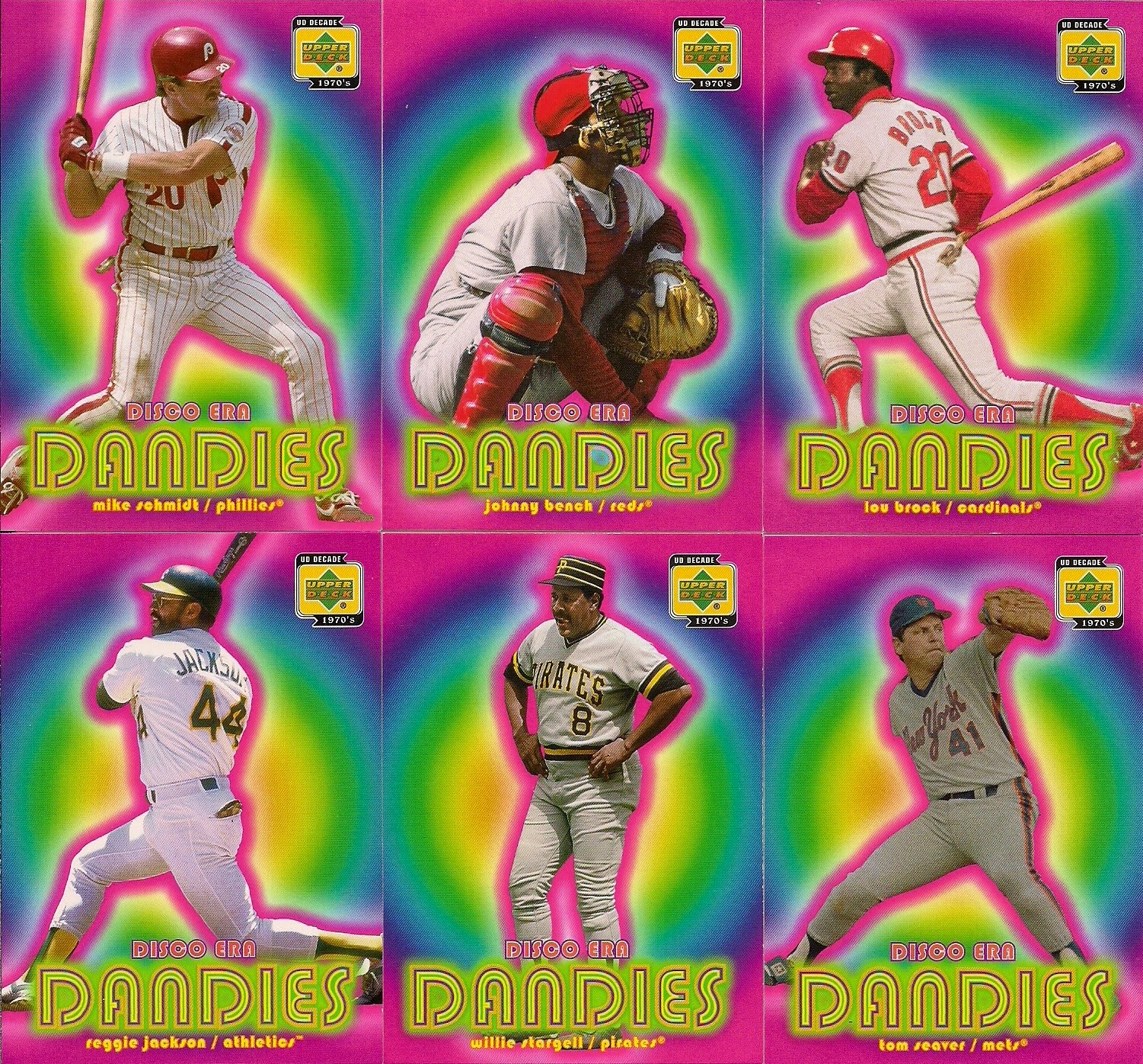 That makes me all giddy. I thought it'd be forever before I finished that.

Truthfully, I don't know if all of these players are right for a set titled "Disco Era Dandies". If I was doing this set, I would have filled it with 1979 Pirates, with one extra card of Sister Sledge. Then there's the fact that Jackson's photo is definitely not from the '70s (nor Schmidt's).

And just to get even pickier, the names for these sets are painful. Nobody played with Bell Bottomed uniforms in the '70s, and "dandies" is some term from the 1940s.

But forget all that because LOOK AT ALL THE COLORS!!!!

And two insert sets are complete!

And it's the end of March!

And baseball is five days away!

Nick said…
I still think this is one of the best sets of all-time. The LCS I used to frequent had packs of UD Decade in his $1 box all the time, and I just about cleaned him out. The Eck is probably my favorite base single in the set (both because of his painful face and the gloriously ugly '70s Indians jerseys), and the Disco Era Dandies have to be the grooviest cards in history.
March 31, 2015 at 8:08 PM

acrackedbat said…
Decade 70's - one of my favorites sets. I'm also on the groovy bandstand with the Disco D's! The 70's were one of the most colorful decades IMO, and this insert set celebrates it in style! That ain't no jive!
March 31, 2015 at 8:24 PM

GCA said…
I would never buy boxes of products I've already completed, but if I did, this would be one of the first....Decade 70's is just such a celebration of all those guys we know so well. Had to get second copies of half the inserts and base for all the player collection guys included in it...
April 1, 2015 at 10:09 AM