Hello, Halloween fans. Tonight we explore the spookiest number to ever grace a baseball card.

The No. 666, the so-called "Mark of the Beast," is often associated with the devil. And for years, it was too scary of a number to appear on the back of a baseball card unless some player was unfortunate enough to compile exactly 666 career hits, runs, RBIs, etc. 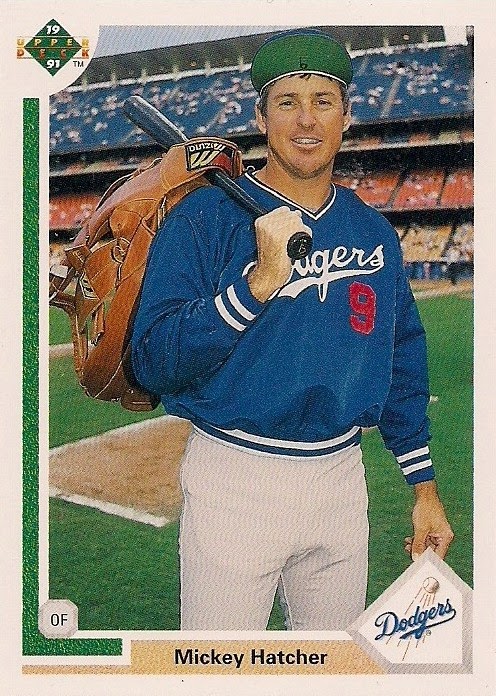 We're all aware of the Upper Deck employee who as a Giants fan thought it would be amusing to make sure that a Dodger player received card #666. And for a few years in the early days of Upper Deck's history, that's exactly what happened. Of course, Upper Deck eventually lost its MLB license and fell out of favor with a lot of collectors, and I'll bet that it can be traced to this particular prank. You don't fool with No. 666. 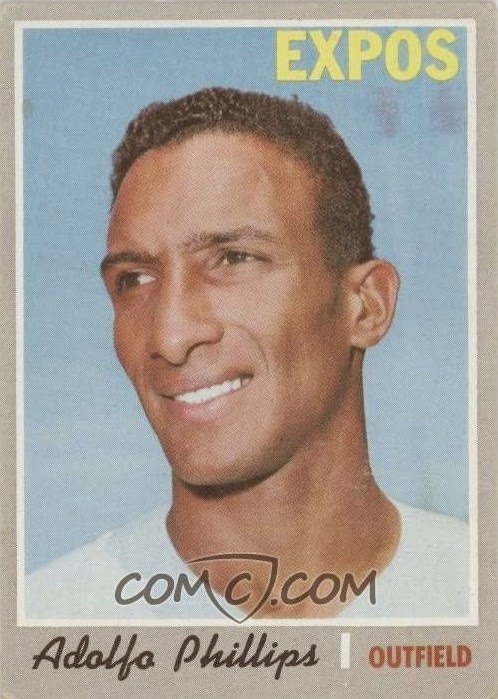 That someone was Adolfo Phillips. A former Cub who was unlucky enough to be traded to the expansion Expos in 1969 (although considering what happened to the '69 Cubs, maybe he was fortunate).

Phillips made it through being number #666 relatively unscathed, but it's interesting to note that he spent the entire 1971 season in the minor leagues after seven years in the majors. Hmmm. 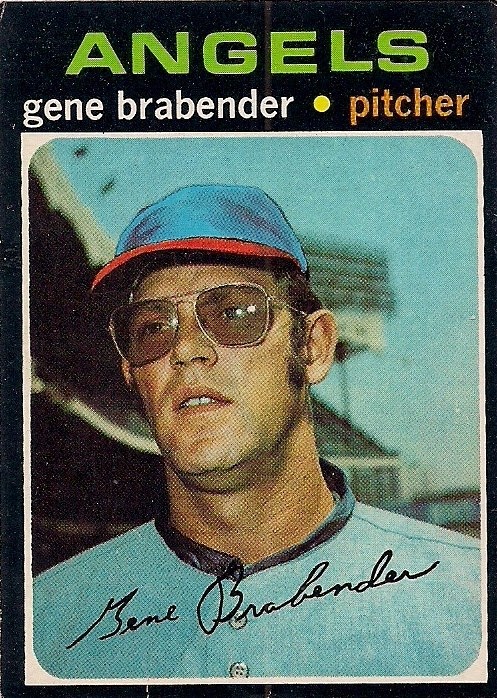 Card #666 in the 1971 set was Gene Brabender. Brabender was also recently transacted, traded from the Brewers to the Angels in 1971. Brabender would not play another major league game after receiving card #666. And his nickname was "Lurch". Hmmmm. 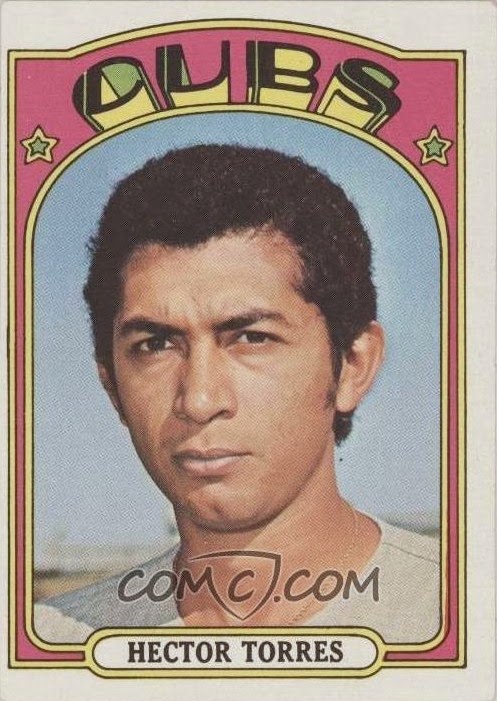 Hector Torres, a backup infielder during the 1970s, received #666 in the 1972 set. He doesn't seem too happy about it. Torres would play until 1977, but always with lousy teams, the Expos, the Padres, the expansion Blue Jays. Hmmmm.

Then in 1973, Topps scaled back its set, to 660 cards. There would be no #666. Maybe Topps got freaked out by "The Exorcist," which was released around then (although in December 1973). But whatever the reason, Topps stuck with 660 cards for the next five years.

These are the sets that I knew when I first started collecting. A 660-card made sense to me. 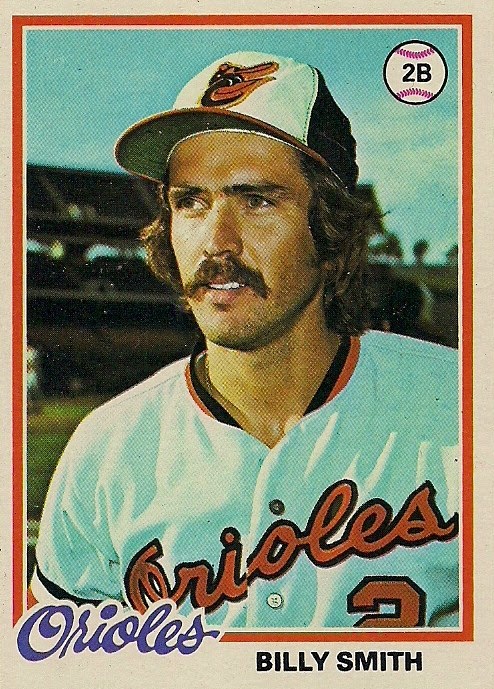 It was Billy Smith. A weak-hitting infielder for the Orioles. I could tell he was sinister just looking at him.

I kept my eye on that Billy Smith card.

A year later, Topps' set was still 726 cards and I warily waited for the man who would wear #666. 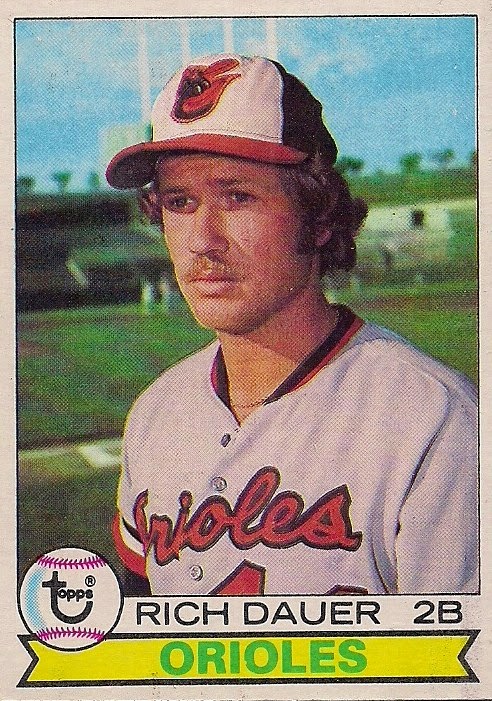 Another mediocre-hitting, middle infielder from the Orioles.

Sure, Dauer could hit better than Smith, but the similarity of the two cards gave me the willies.

Here, look at them together: 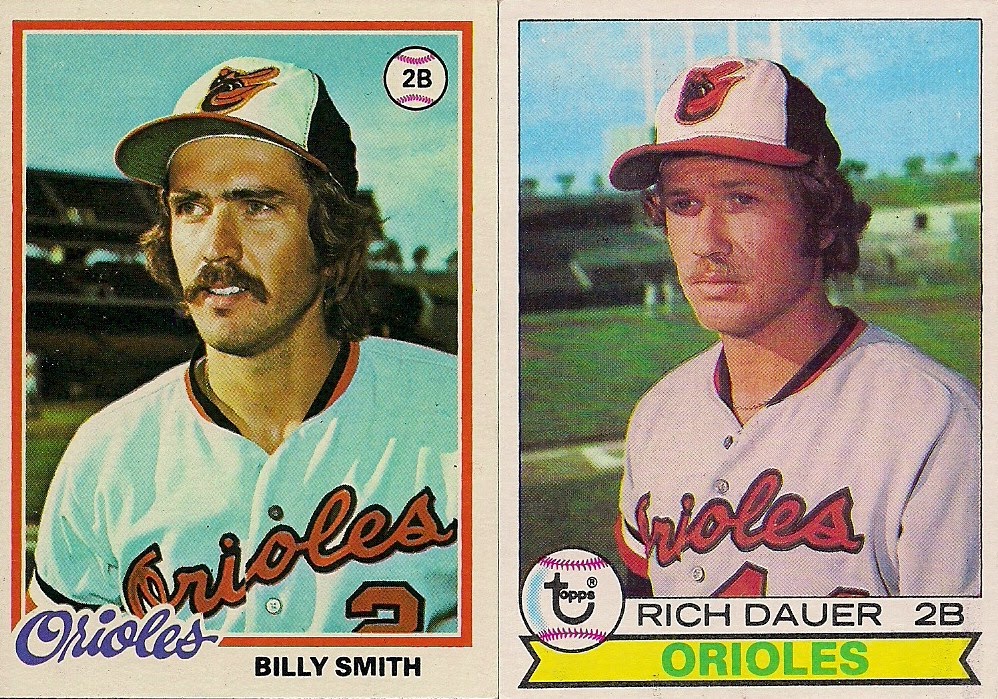 No, I'm not playing with either of you! 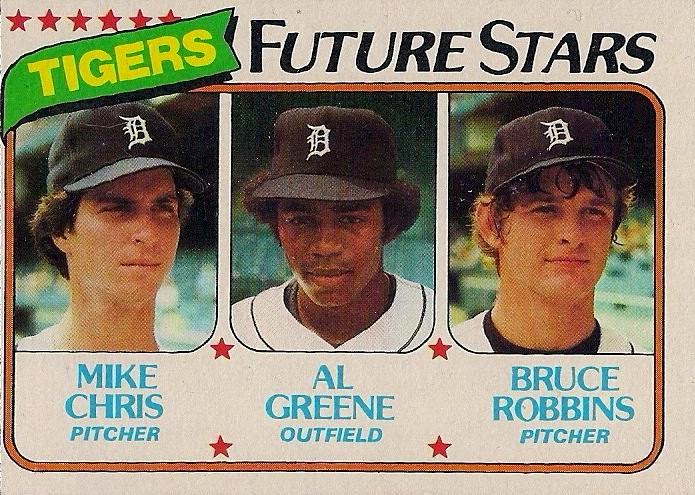 Card #666 was a bunch of Tigers future stars. That's a heck of a curse to place on some fresh-faced ball players. None of these players ended up being future stars, or even played all that long in the majors. I'm blaming #666.

Then I began to notice something: 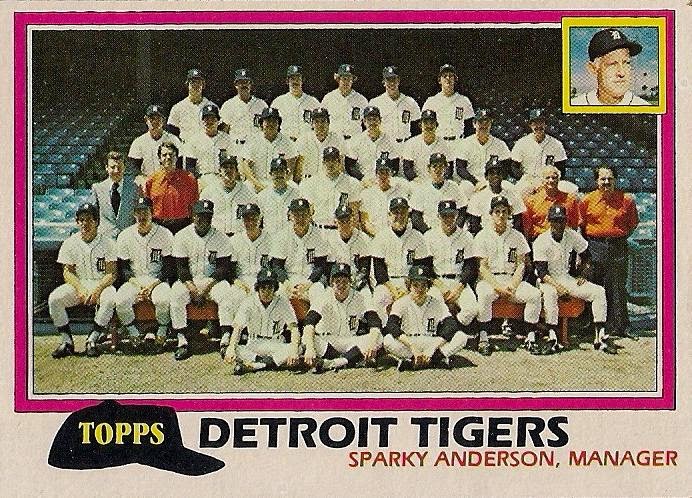 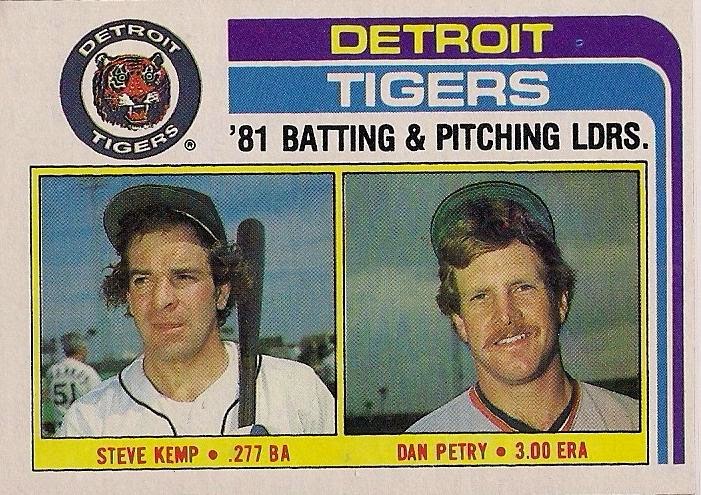 In 1982, it was the Tigers leaders, with their hats placed atop their head as if to ward off demons. 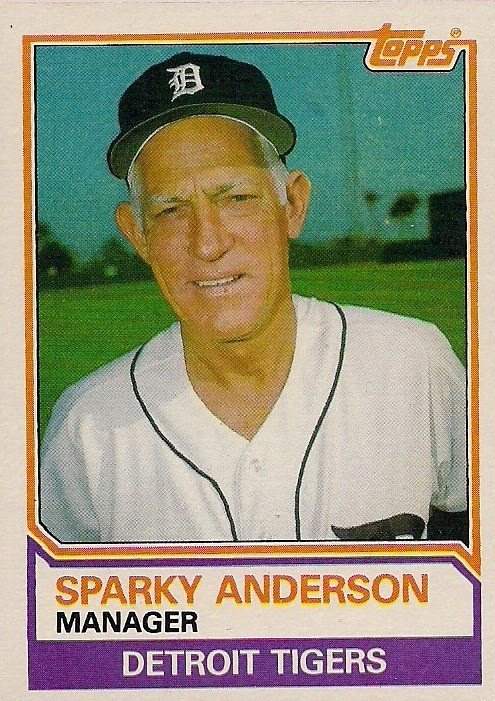 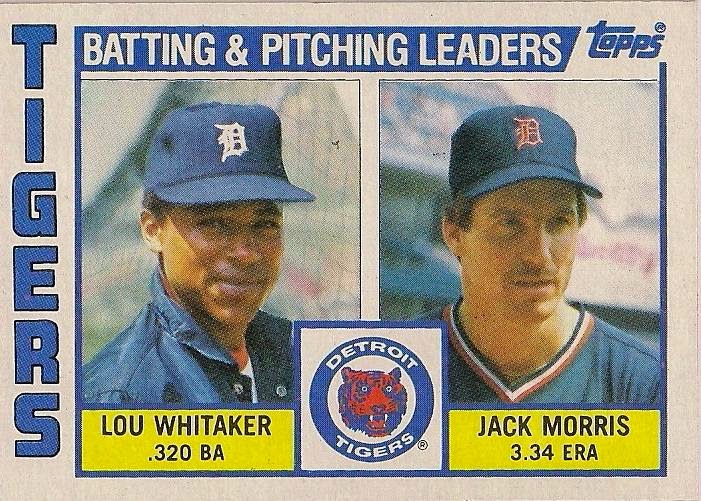 And in 1984, it was the Tigers' leaders again. (The Tiger logo looks particularly devilish here).

It was practically decided in April.

Then it dawned on me: did the Tigers make a pact with the devil and Topps?

Did the Tigers agree to be featured as the #666 card all those years in exchange for a World Series title? 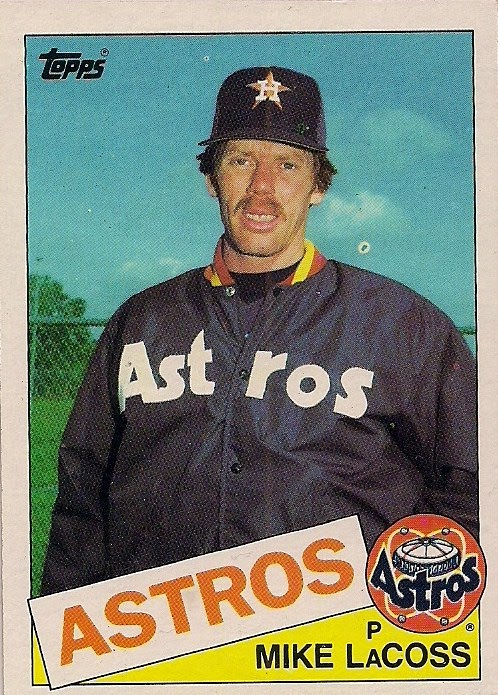 A pact with the devil I'm telling ya! The Tigers got their World Series so now they didn't need to be on card #666 anymore!

After that, there didn't seem to be any pattern to who received the #666 card. 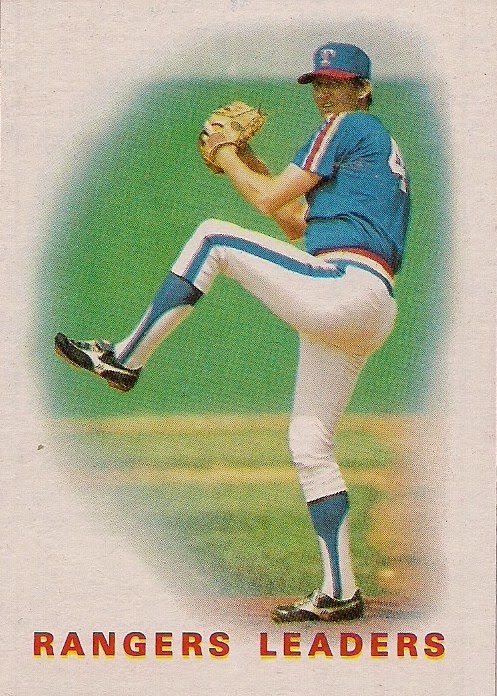 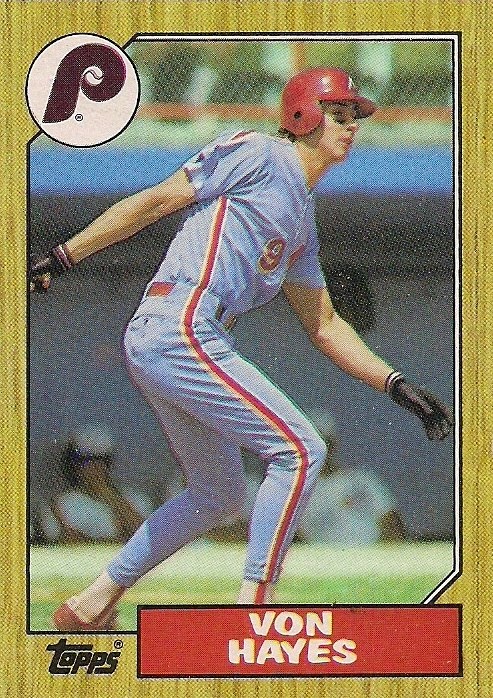 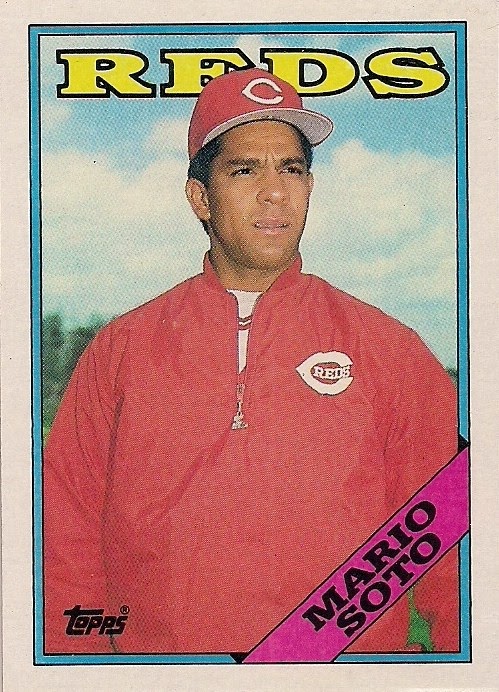 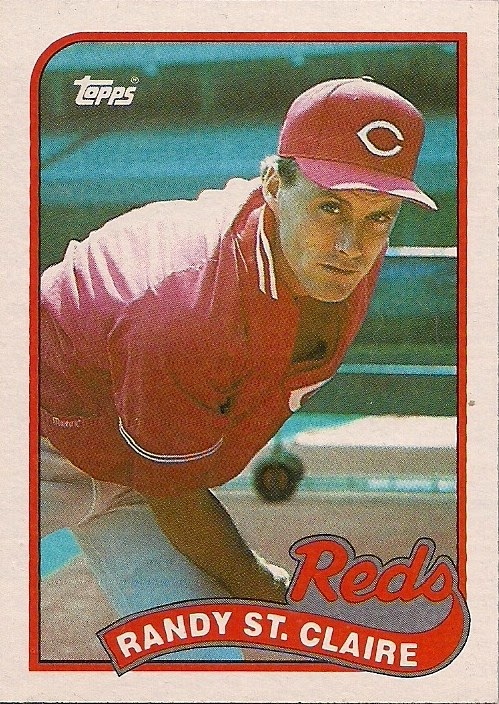 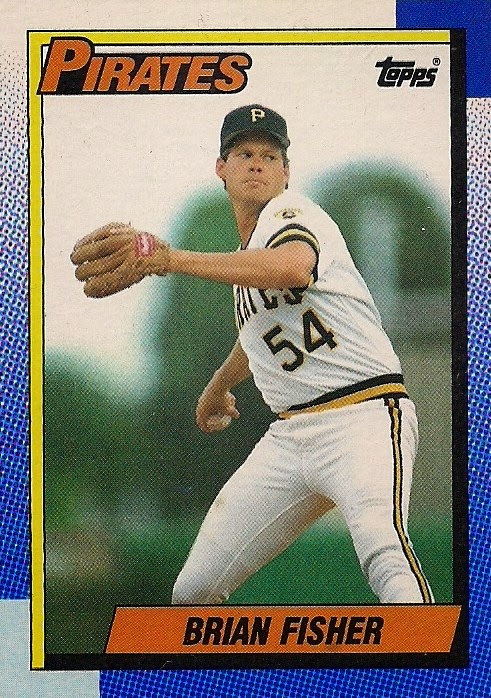 So maybe all of this #666 card nonsense is just a coincidence.

Except for those early Upper Deck #666 cards.

Those weren't a coincidence.

That was just someone being creepy.

Play at the Plate said…
Great Shining reference. That was the first movie that truly scared me.
October 31, 2014 at 7:24 PM

cynicalbuddha said…
Dammit, this was literally on my to blog about list! We done sir. I guess I'll work something up on sock height or something or maybe a trade post.
October 31, 2014 at 7:45 PM

mr haverkamp said…
Happy belated Halloween, N.O., checking closer on the 78/79 Smith/Dauer cards am pretty sure they were both photographed in the stadium of my youth, the Oakland-Alameda County Coliseum. That's some spooky stuff.
November 1, 2014 at 6:08 PM

AthleticGigantes said…
What a diabolical mind and humor to come up with the 666 analyses. Perhaps the Tiger series of the #666 card was an Omen of things to come in 1984. Also, the 78/79 cards were taken in Oakland were I too spent part of my youth. Finally, happy - post Halloween but on the west coast we still have a few hours left to celebrate the dia de los.muertos.
November 2, 2014 at 1:30 AM

Stack22 said…
"We were talking about what to call Brabender when he gets here. He looks rather like Lurch of the 'Addams Family,' so we thought we might call him that, or Monster, or Animal, which is what they called him in Baltimore last year. Then Larry Haney told us how Brabender used to take those thick metal spikes that are used to hold the bases down and bend them in his bare hands. 'In that case,' said Gary Bell, 'we better call him Sir.'" -Ball Four
November 3, 2014 at 1:28 PM

musicfan87 said…
You're going to write a post about the number 666, without referencing the great Christmas Eve bipping of 2013???