Burying my disappointment in an avalanche of cardboard 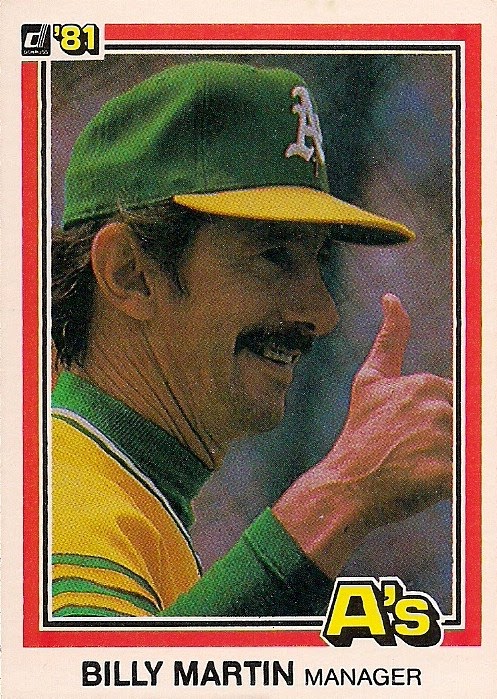 Perhaps you've heard that 1.8 percent of major league baseball fans are happy because the Giants won the World Series again. As you can imagine, I'm part of the 98.2 percent that is not happy. In the least. I can't bring myself to say it was a great postseason or Series or any of that 'yay, baseball!' stuff because I'm too INVESTED.

Also, I'll never get used to the fact that a team that ended the season six games behind gets a World Series trophy. That's regardless of whether it's the Giants or not ... OK, it annoys me more that it's the Giants ... but, really, baseball what are you doing to yourself? I know it's irreparable and most fans have moved on and the other sports have been dealing with this for a long time since way back when I was a child, but six games behind, man. Six. Games. Behind.

Anyway, it's another lost postseason and to add to that joy I've worked 15 days straight and there's no real certainty about my next day off. October has not been friendly other than the pretty colors outside, so it's time to immerse myself in something that is friendly.

I recently received a glorious package from Dave, who has sent me so many goodies that I really need to be linking him. He doesn't have a blog, so I think I'll just throw his name down in the labels as a proper tribute.

As usual, Dave covered just about all the bases when sending me a package, forcing me into a top 10 countdown (sorry, Lost Collector) of the most fantastic items. They're pretty cool. 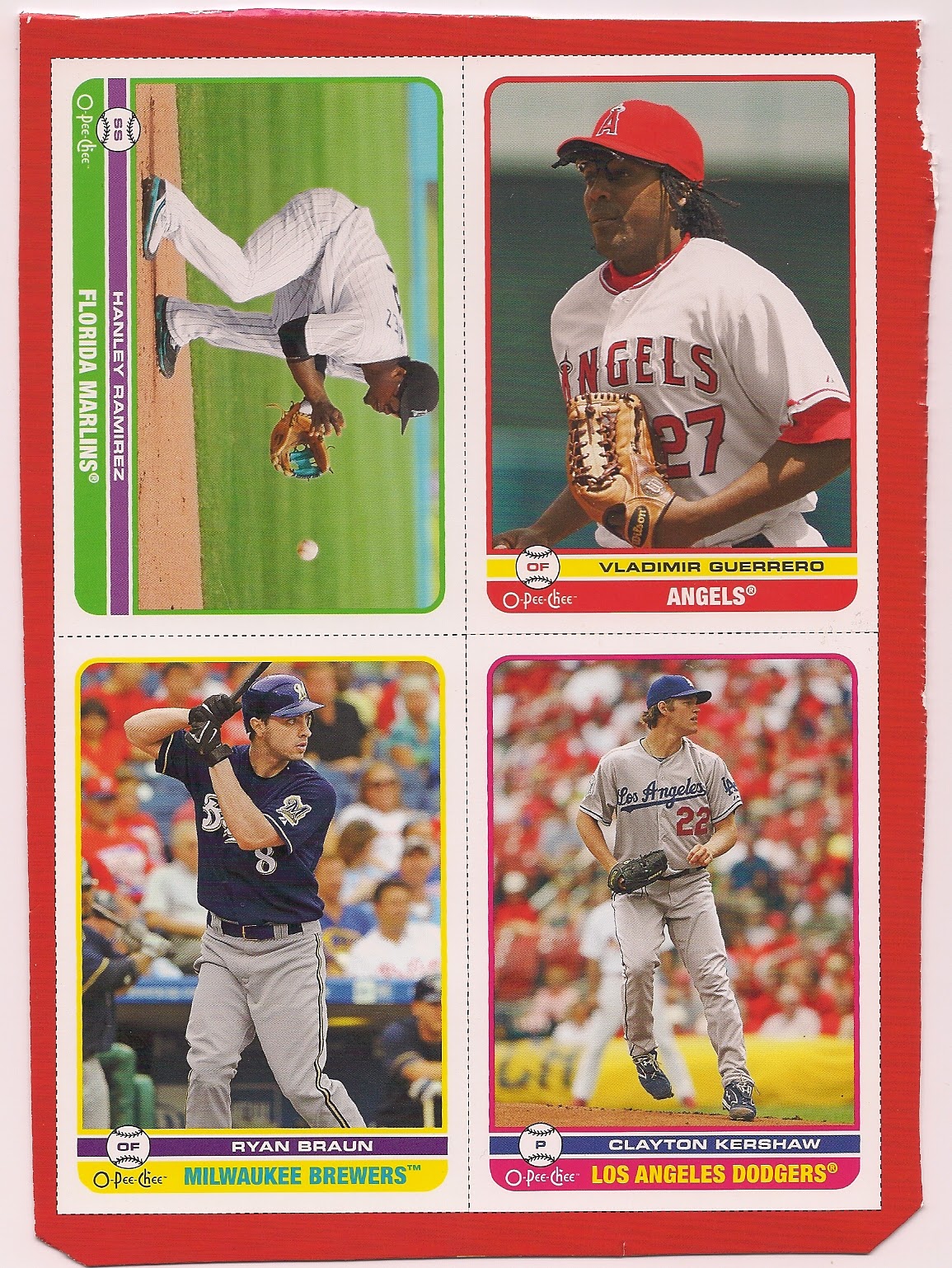 Dave has sent one of these before, and it's still intact. But I think I'll be cutting this up so I can add the Kershaw blank back in my collection. He can't be hanging out next to Ryan Braun anyway. 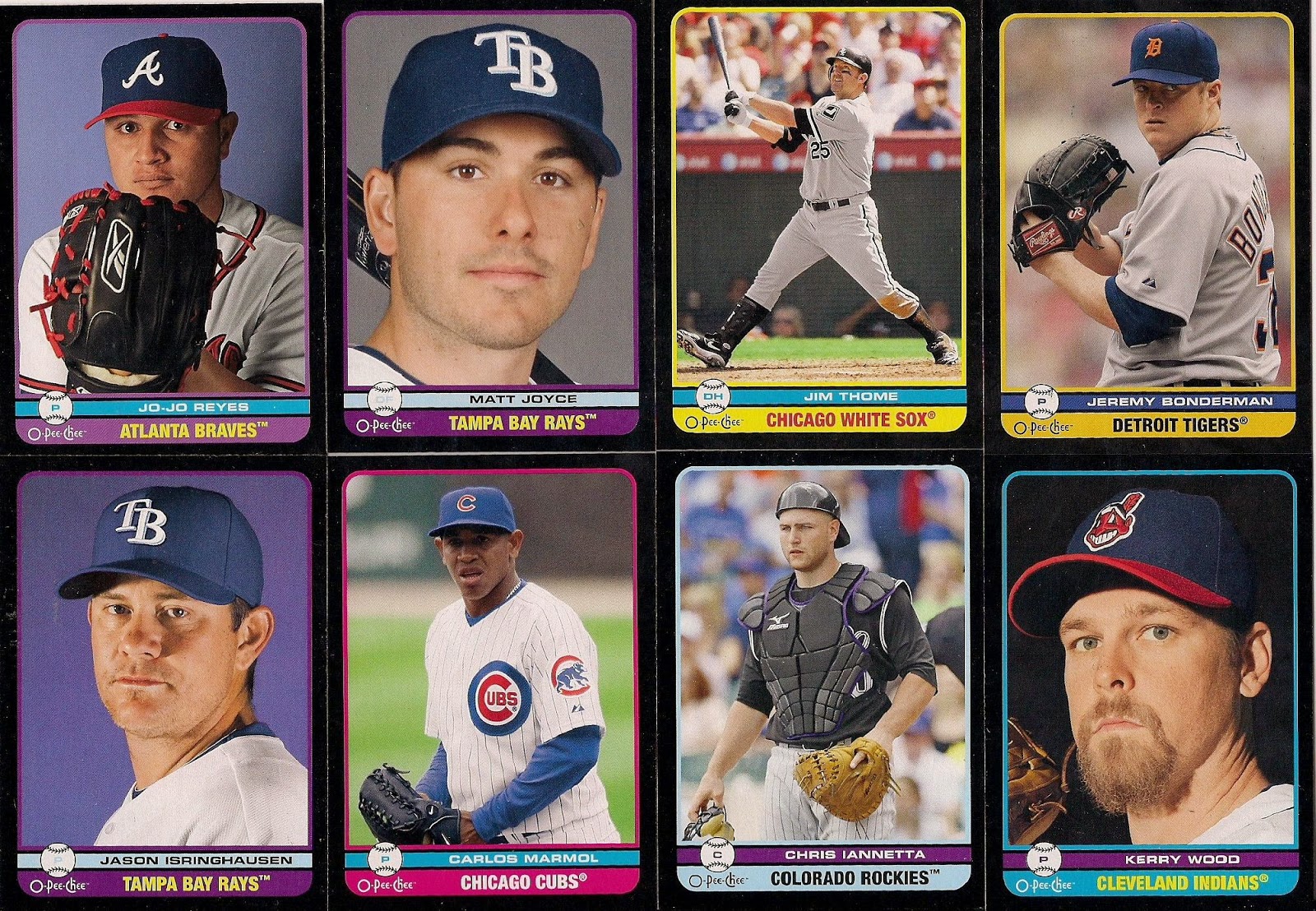 Wow, there were a lot of these. 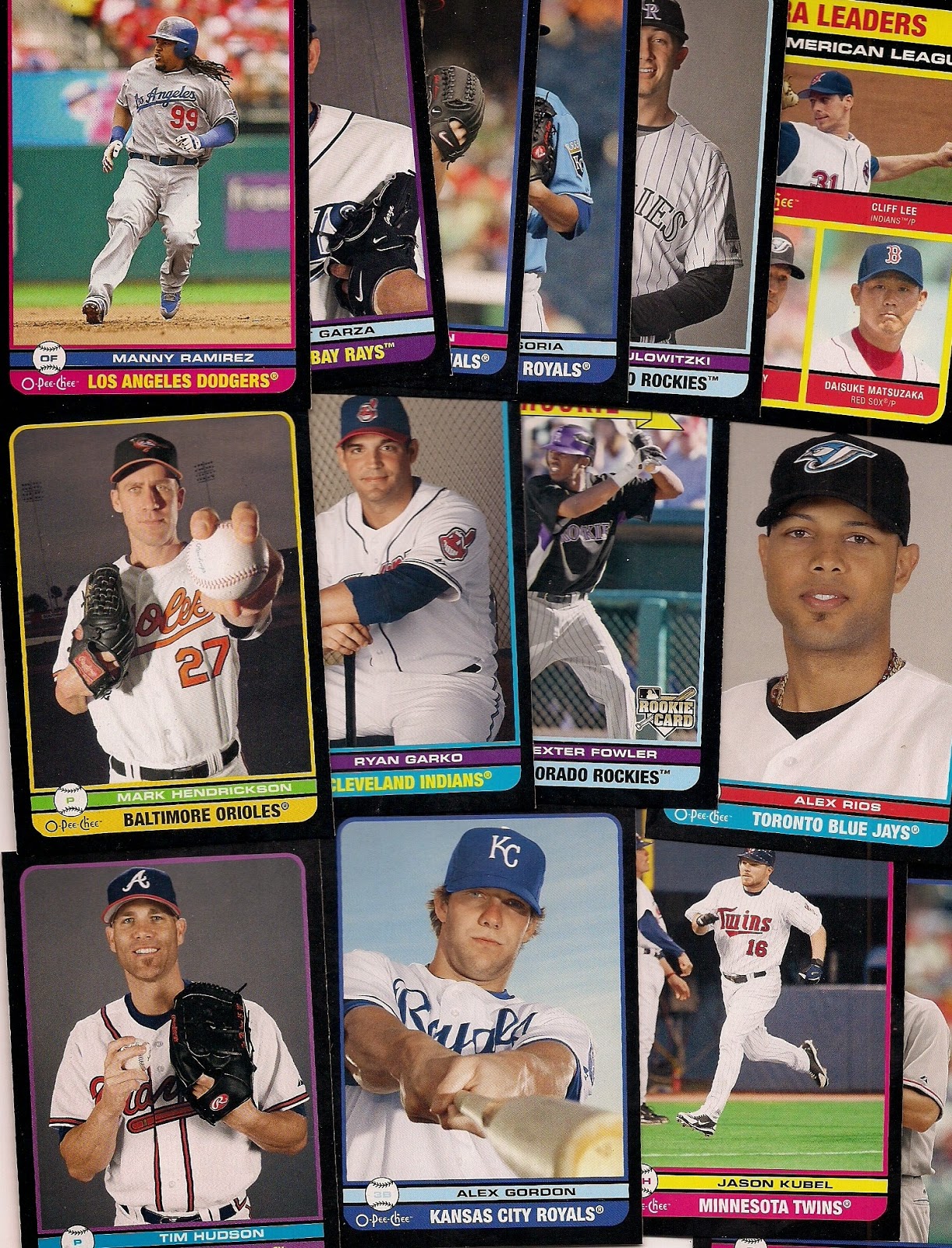 A lot of these. 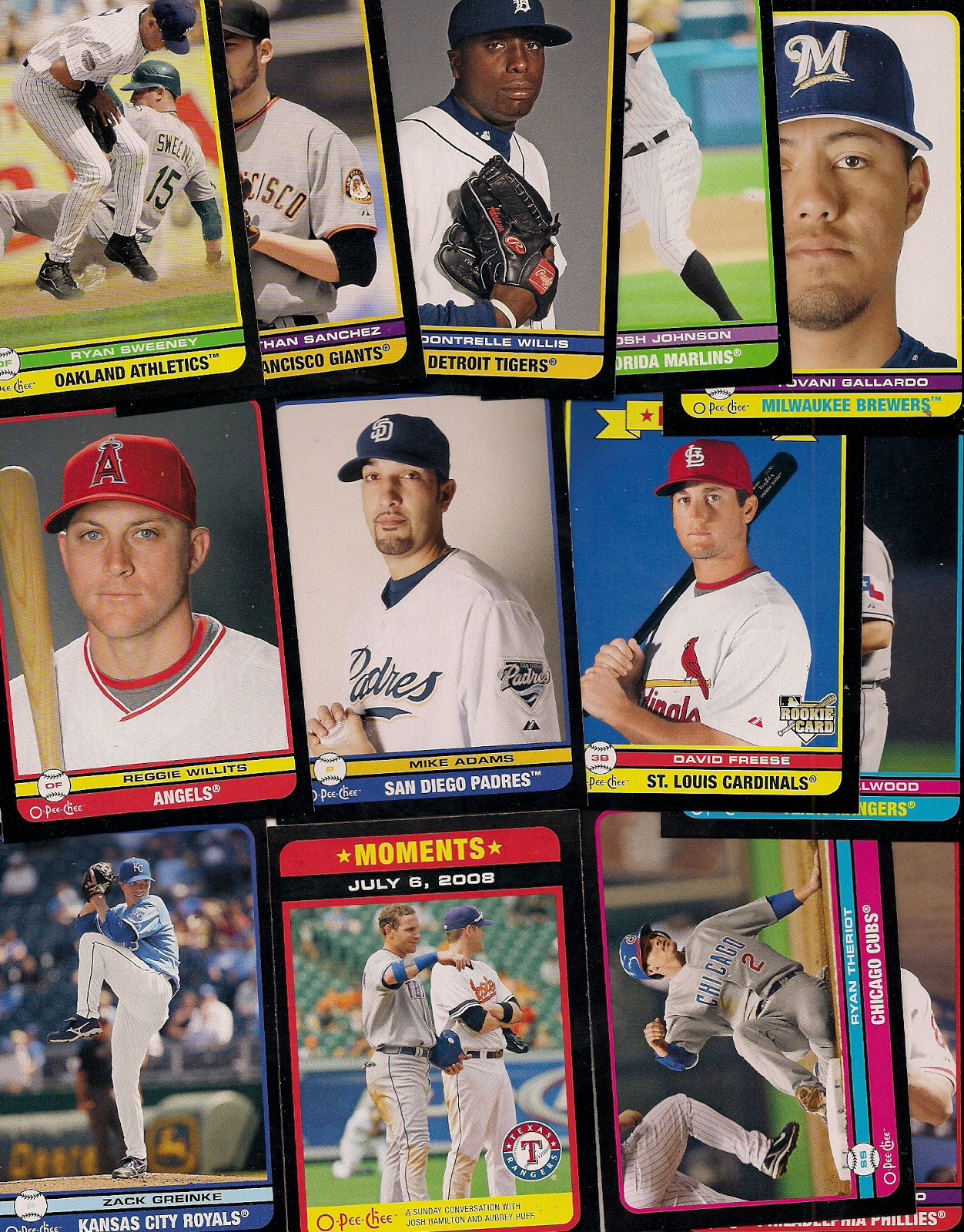 A LOT OF THESE.

That's not all of them either. 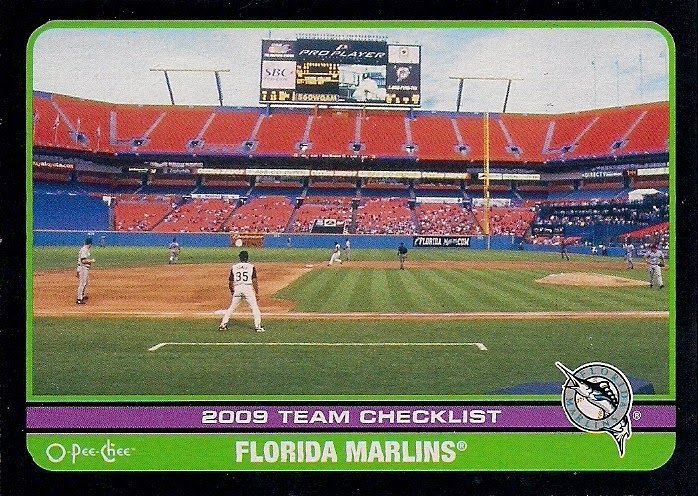 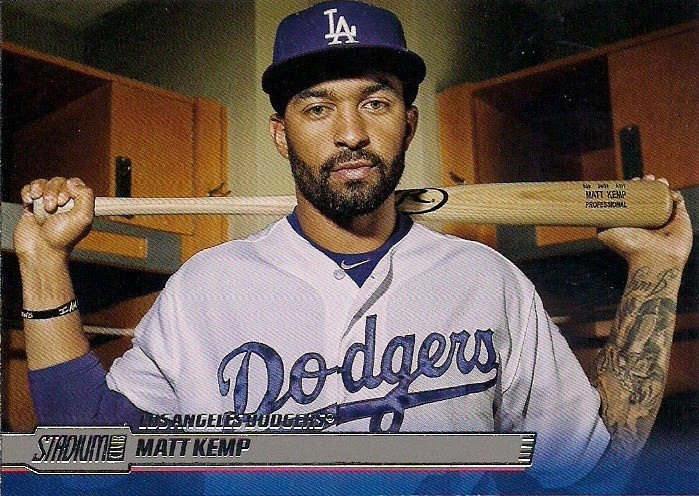 I'm not ranking these higher because they're mostly modern guys and I don't want to think about modern baseball right now. 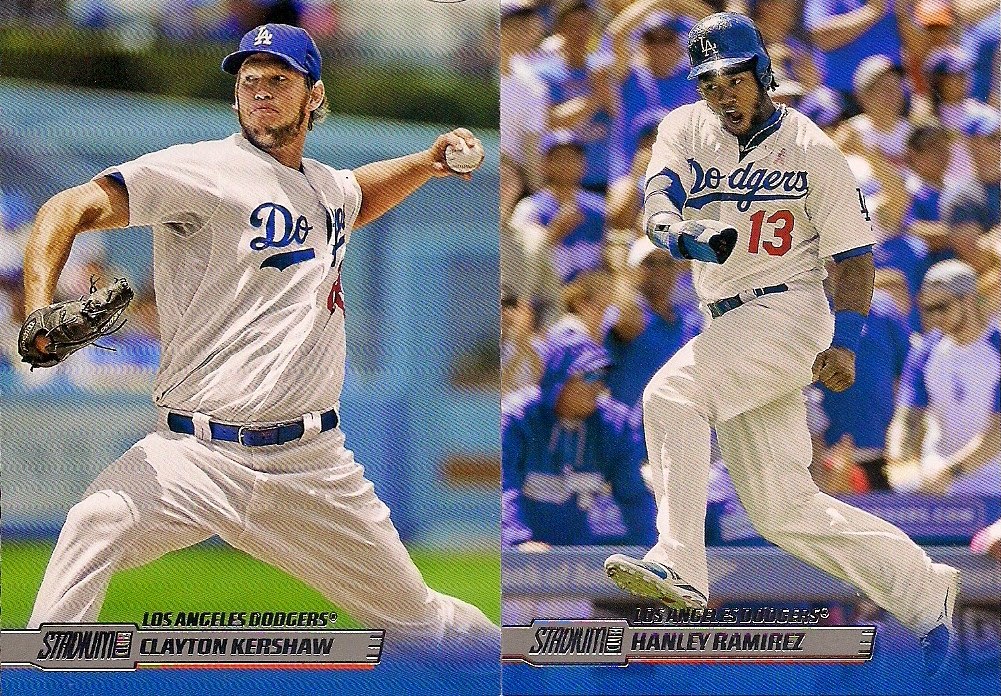 These did give me my first look at Stadium Club, and I like them a lot. I'll never collect the full set because I learned from 2008 Stadium Club that Topps can't leave SC alone with out screwing up the collation or other nonsense. But the cards themselves look terrific. 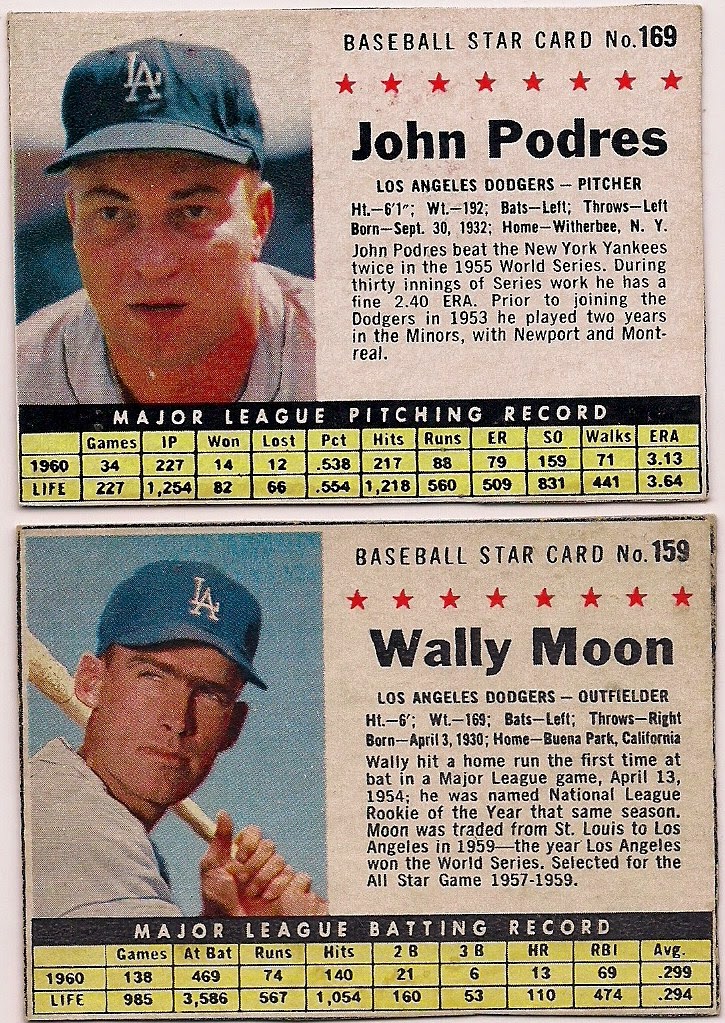 That's better. Here are some Dodgers who were able to win their division and ... here's a thought, then play in the World Series! They won some, too. 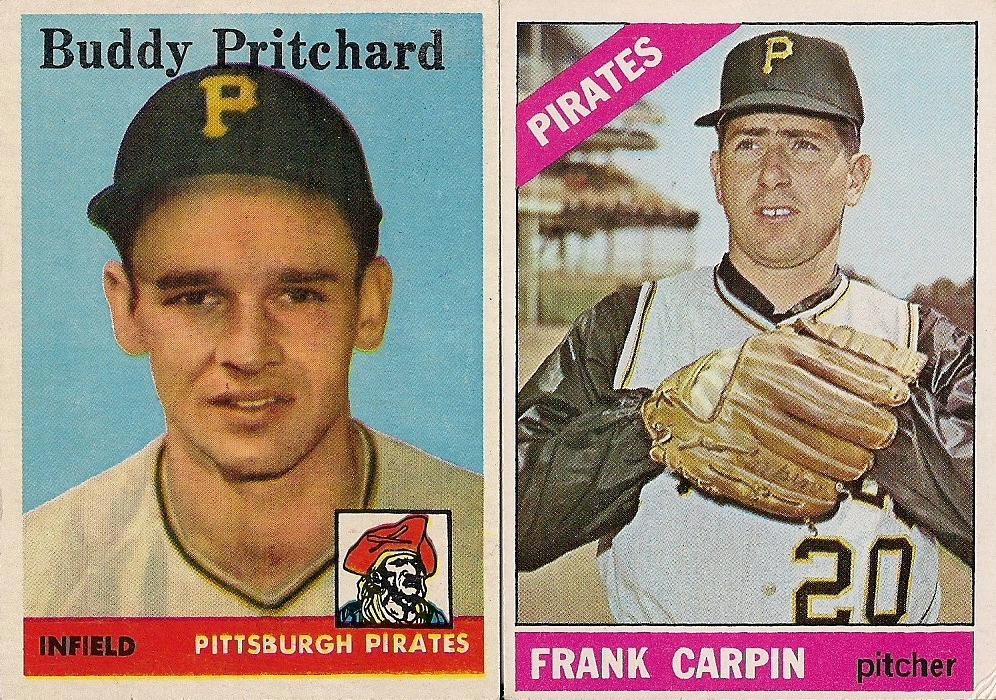 That Dave is always thinking ... and coming up with cards. I like the One-and-Done Series that I do where I find players who had just one card in a major set for their whole career. But I've never made a collection out of it.

Thanks to Dave, I now have a collection. A nice vintage collection, too! 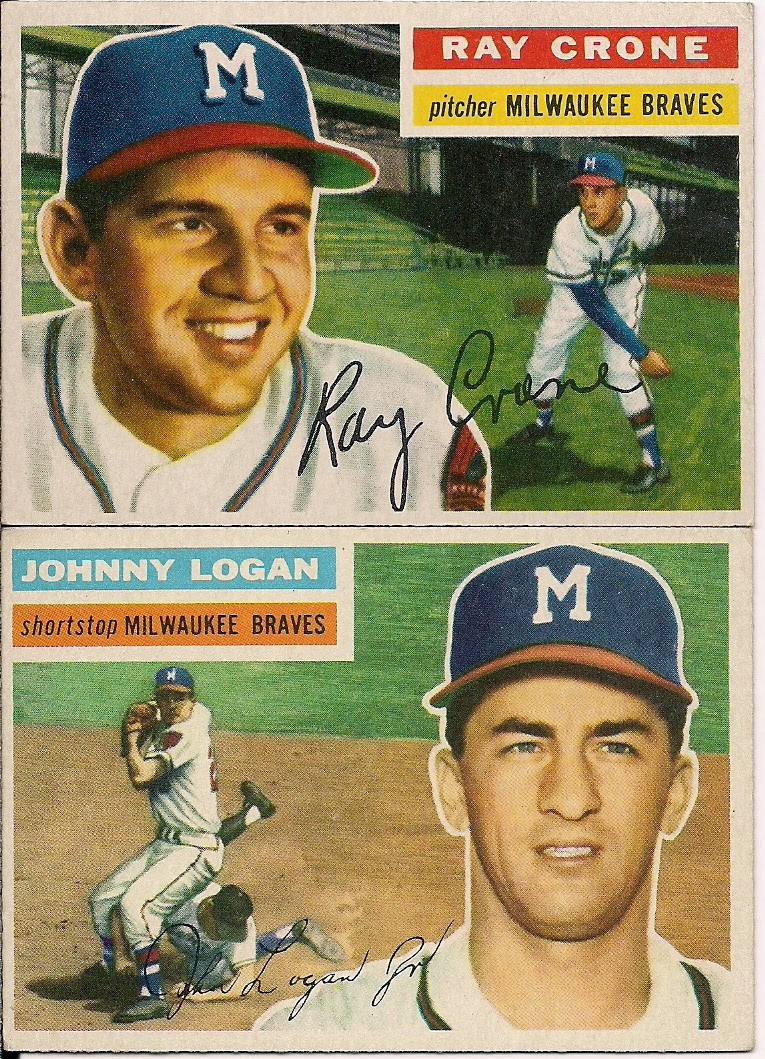 I'd love to rank these higher, but, you know, they were all Braves. One's from my hometown though (Logan), so I'll be nice to that one. 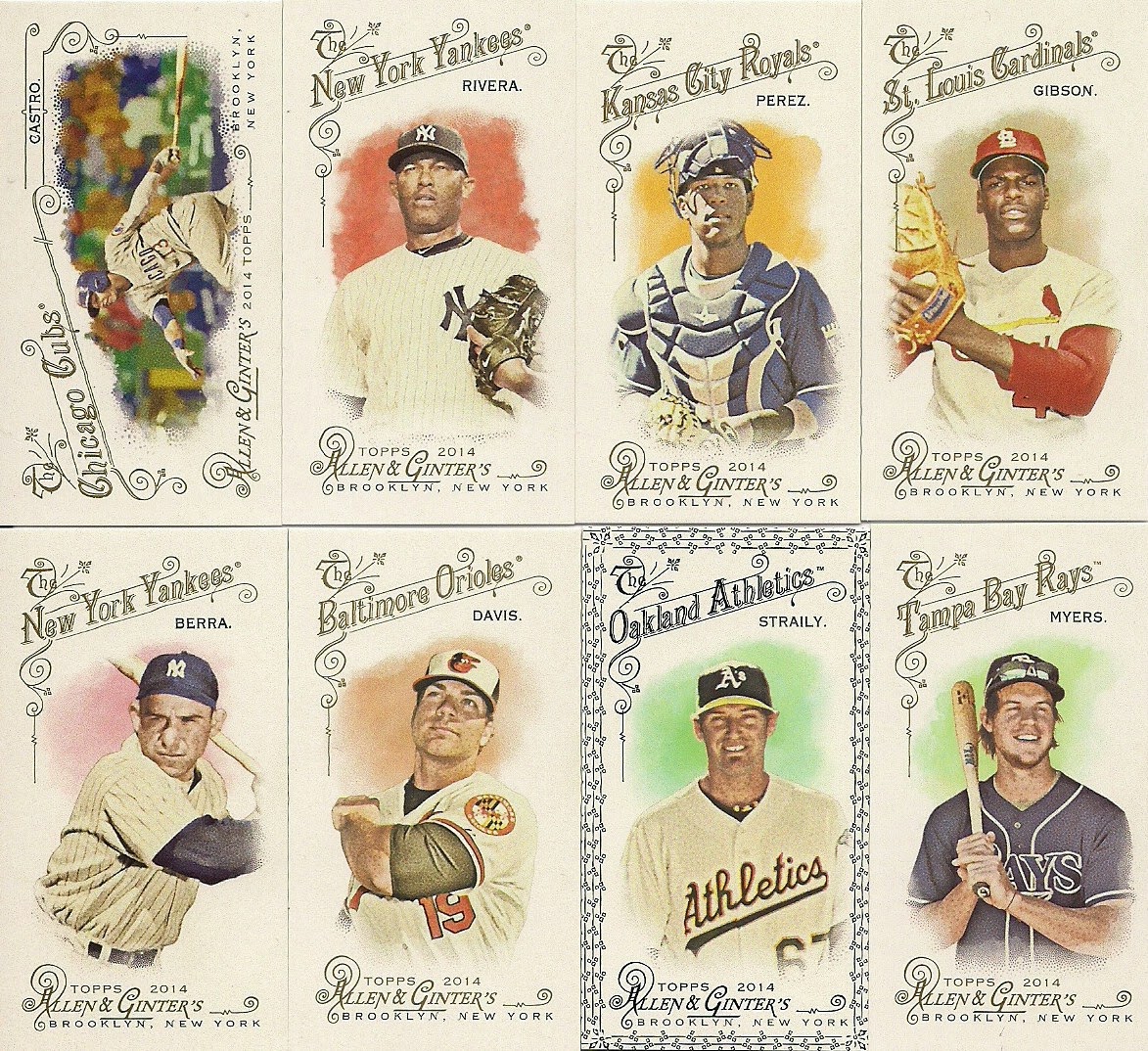 The majority of these have already qualified for the frankenset binder. Some very, very nice ones there. 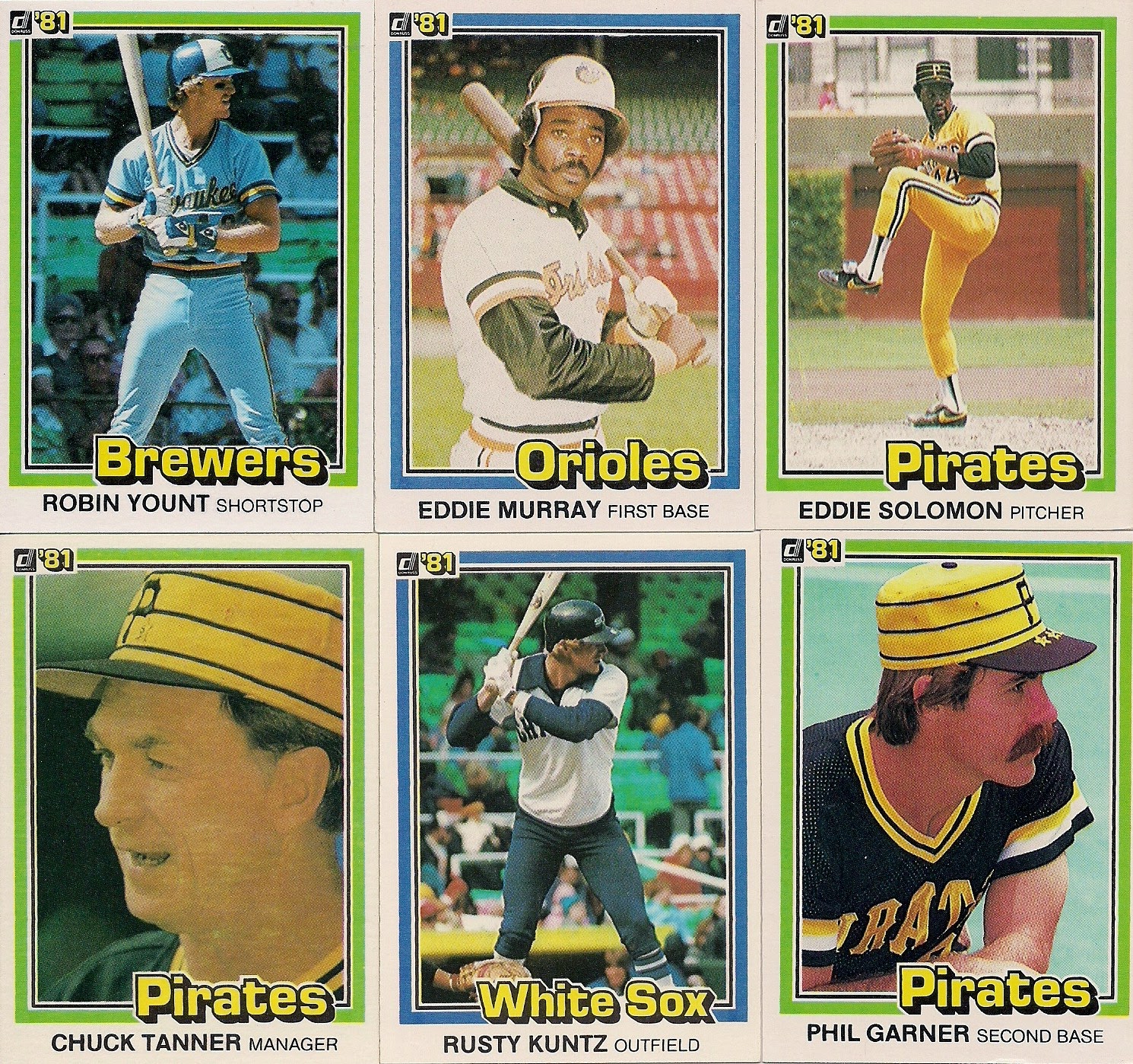 I was so excited to get these that they were the first items I crossed off the want list. This group is abundant with Pirates ... and Rusty Kuntz. 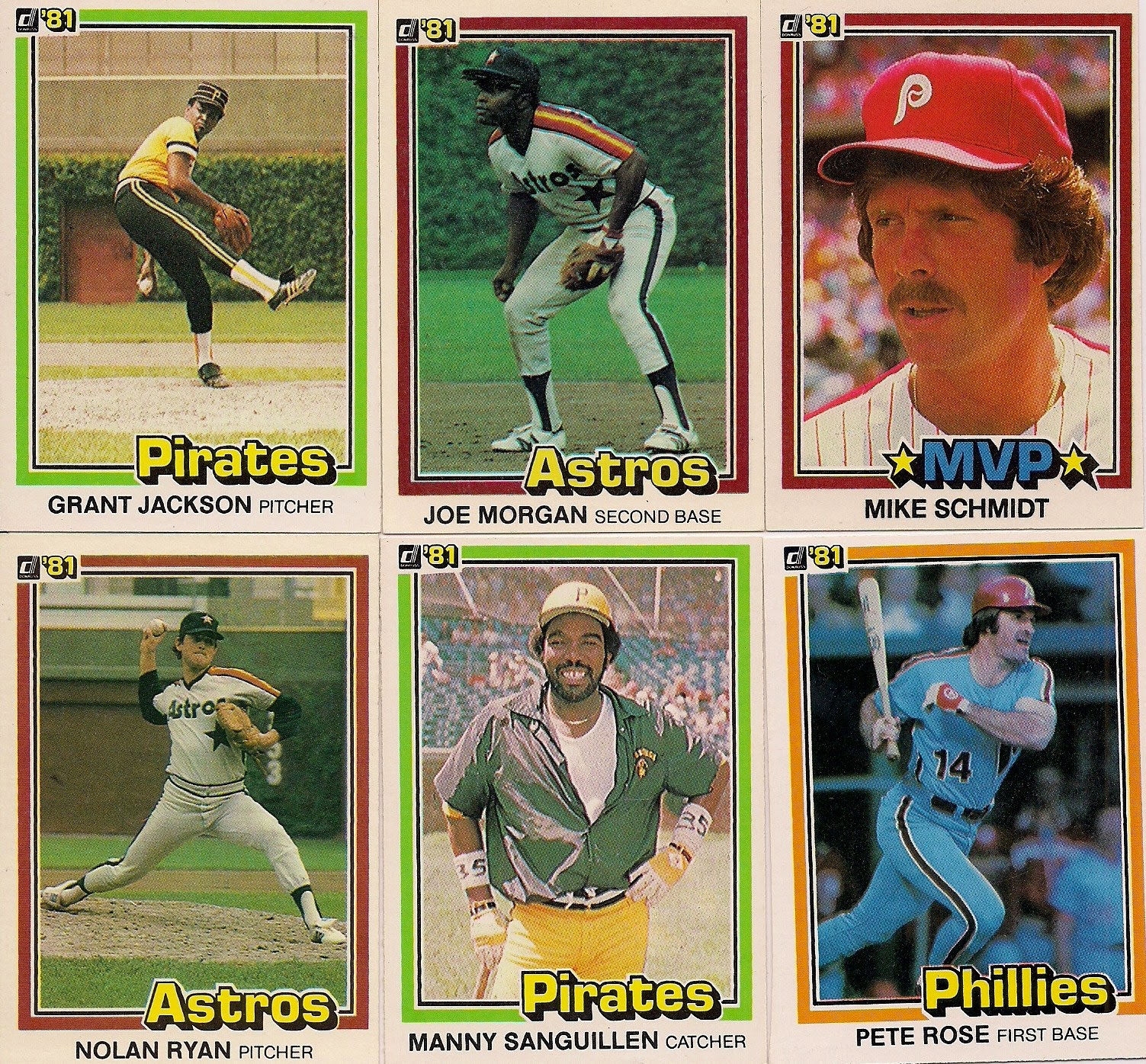 I'm starting to get a new appreciation for '81 Donruss with this project. I love the Sanguillen card. Is that a wife-beater he's wearing? 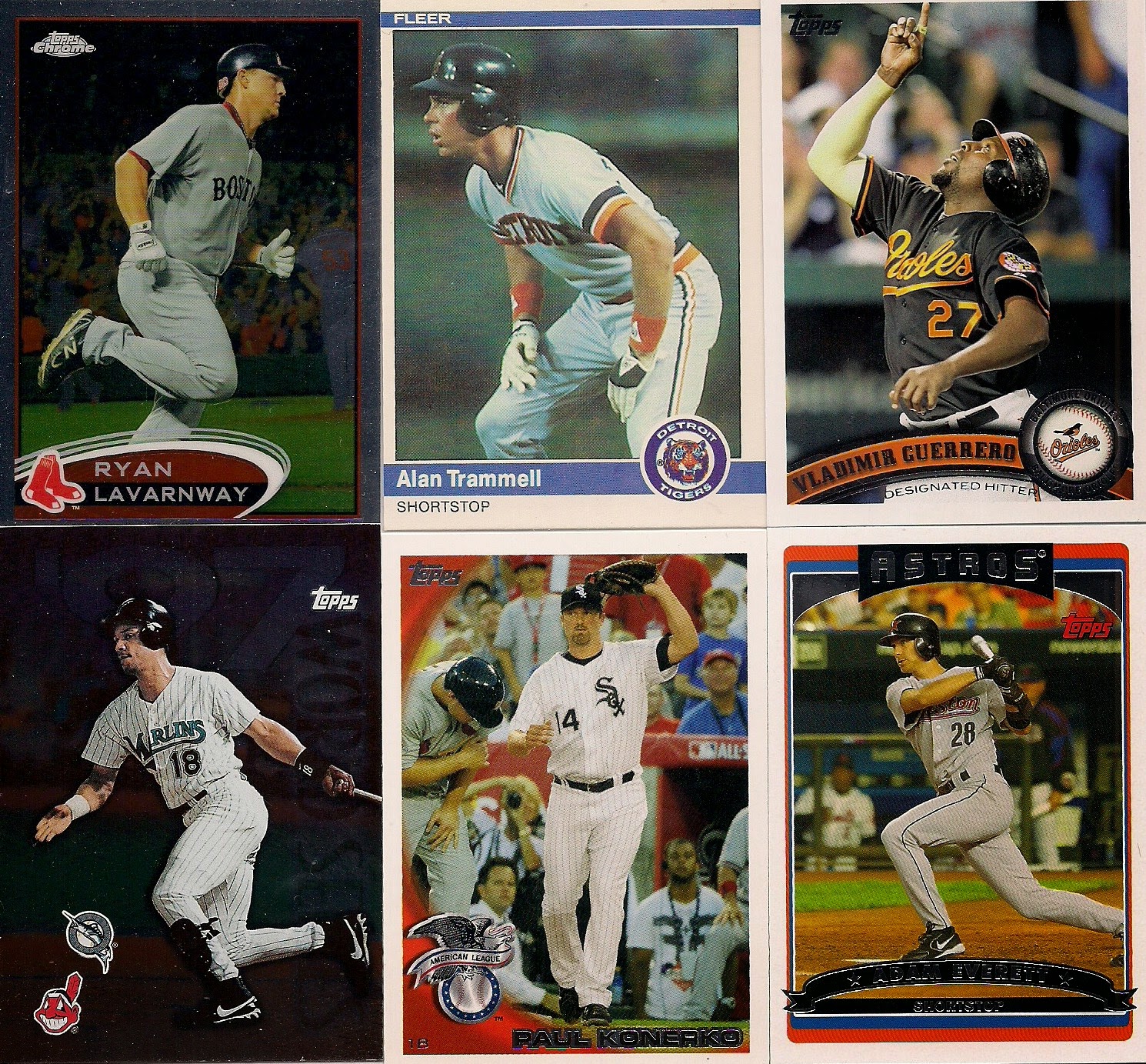 Lots and lots of night cards, too. Many of them looked like above.

I've never been happier to receive Yankees cards. I also never knew that there were so many night cards in early 1960s Post sets. I have several of them now! 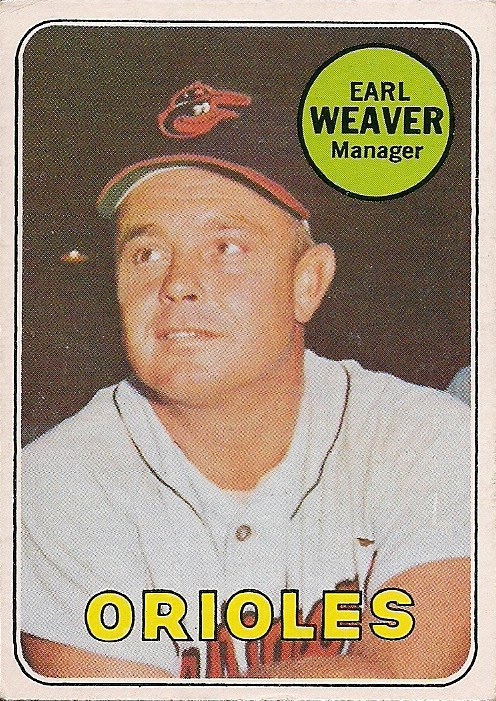 But I don't think it's actually a night card. I think it's an "in the dugout" card or maybe an "in the clubhouse" card. I can't even tell you if that item Weaver is staring at is a light. Maybe it IS a UFO. 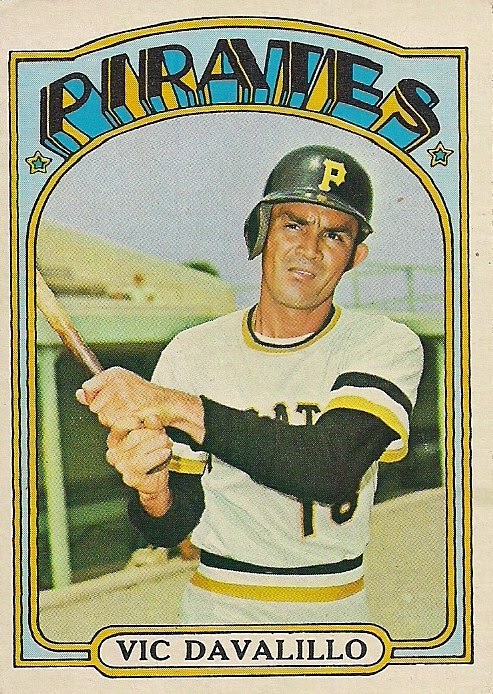 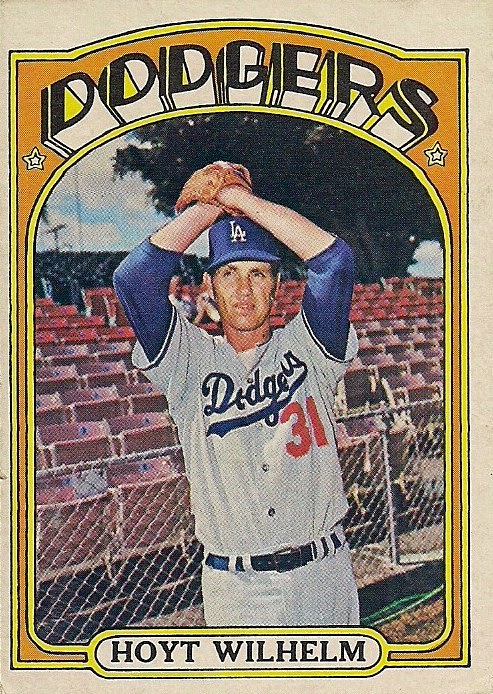 Then there's one of the greatest Hoyt Wilhelm cards of all-time. 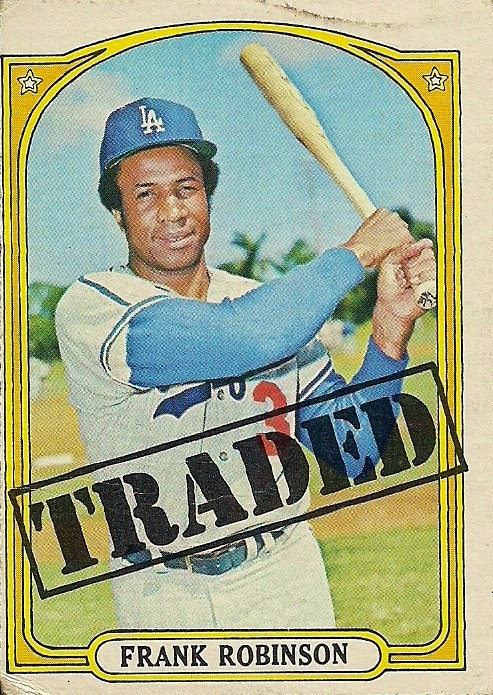 Then there's this miscut beauty, which happens to be on the Best Dodgers Cards Ever Made top 100. It's No. 20 on that list, but I really need to do another update of that list. 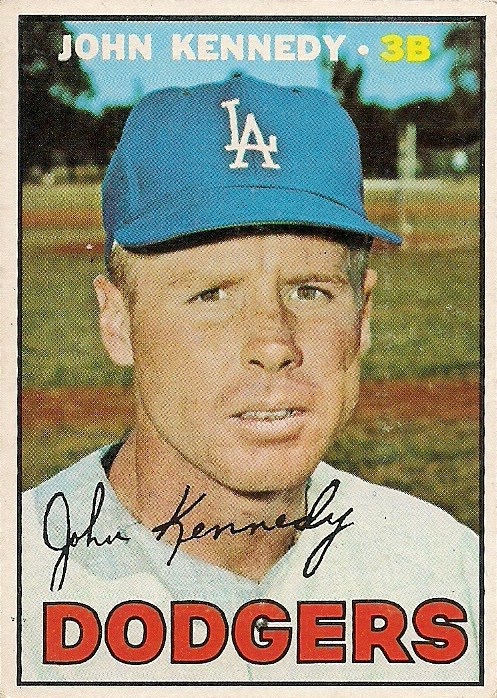 Is there a better kind of vintage?

This Dodgers card of John Kennedy isn't quite random because I'm a Dodger fan, but how about this one? ...

Every collector must have a Colt .45s card in which the uniform features a gun on the front of the jersey. Different times, man.

But the foursome that put Random Vintage squarely at the top is even better: 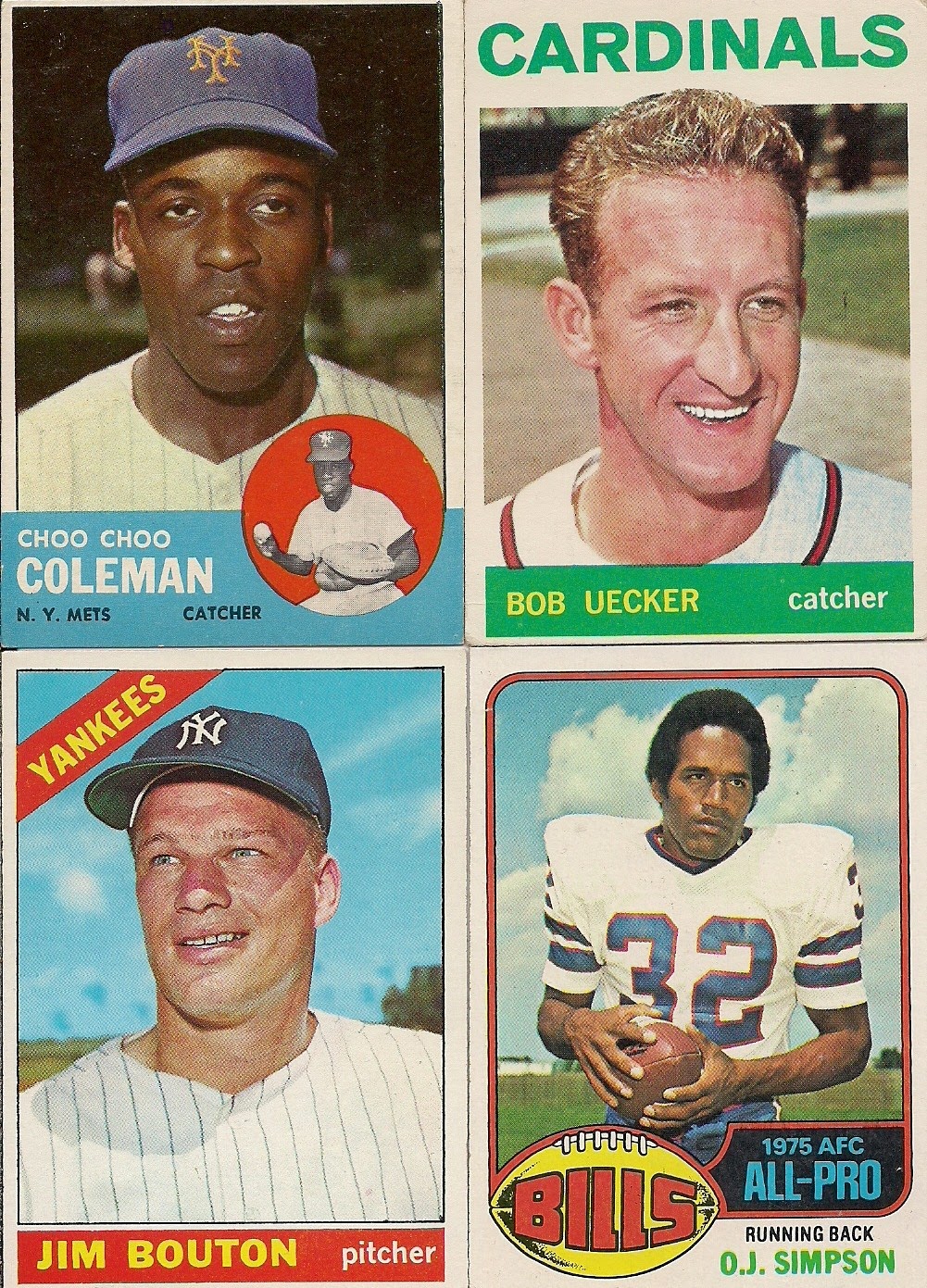 You're looking at my first cards of all four of those individuals (I probably had an O.J. Simpson card back when I was a kid but all those football cards disappeared long ago).

Sure there's some controversy there, but as a Bills fan, I should have a Simpson card. And as a writer, I should have a Jim Bouton card (actually, come to think of it, I do). And as a fan of 1970s beer commercials, I should have a Bob Uecker card. And, finally, if you put "Choo Choo" as someone's name on a baseball card, that should be in my collection, too.

I feel more complete than I did before I got these cards.

So that was some kind of haul!

I'm so buried in cardboard greatness that I don't even remember who won the World Series.

Robert said…
That Uecker is still on my '64 want list. I can't even recall having seen that card live....

GCA said…
Put that Uecker in the front roooowwww!