Yes, another Bowman post. But there's a REALLY good reason for it 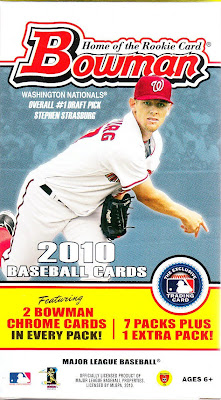 I hope this makes sense. I don't have much time, and I am literally giddy with excitement right now.
You know that thing I said about there not being any Bowman or Topps Series 2 in my area? Forget it. They were the babblings of a crazy man. I was at Wal-Mart today. Both Bowman and Topps Series 2 were there. In relatively plentiful supply.
So I nabbed a cereal box of Series 2 (haven't opened it yet) and a blaster of Bowman (I most definitely have opened that -- and uttered something really loud in the parking lot when I opened it).
I won't go into the details because no one cares, including me at the moment.
Here is the last card of the last pack in the blaster: 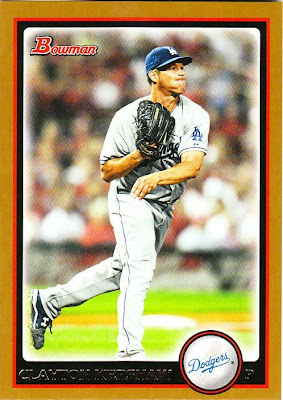 Yay for me! I love pulling a parallel of my favorite player.

OK, nobody cares about that except for me.

So, on we go with something everyone seems to care about.

Here is the sixth card of the second pack of the blaster: 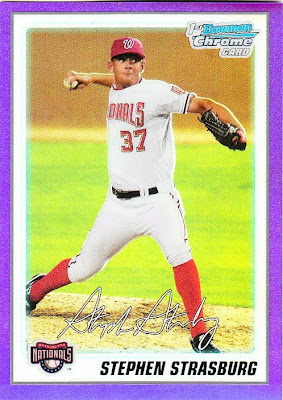 The man himself. Numbered to 999. All purpley.

I know I just advised anyone who pulls a card of this guy to SELL IT, SELL IT, SELL IT! But now that I am in the crazy afterglow of pulling this card, I literally don't know what to do. I do not have an ebay account. I don't sell cards. But I'd love to know how much this could go for.

So, I'm willing to change the rules. I'll take any advice -- the good kind anyway.

I'll be back again when I'm coherent.

Sell it and buy some of those difficult 71 Topps you need!

This should clear $100 for you easily. Your options for selling include: 1. get an eBay account,
2. trade the card for some thing(s) you really want
3. sell the card via a card trading forum of some sort,
4. find someone you know with an eBay account to sell it for you.

Look inside yourself. In your heart, you don't really care about SS, you're just caught up in the hype like the rest of us. I recommend selling now and having the money to treat yourself to something you really want later.
June 16, 2010 at 1:54 PM

Sooz said…
Nice pull ... I'm with everyone else. Sell that sucker.

The Notorious B.U.D. said…
Wow! Nice pull Night Owl. That card has some of the best centering I've seen on a Strasburg refractor. Sell that post haste and pick up some sweet Dodgers or a couple of boxes of A & G.

AdamE said…
My card collecting friend that lives here in my town just sold one with a BIN of 120. evidently it was way to low though because it sold about 2 hours after he listed it.

dogfacedgremlin said…
Listen to all the craziness. The voices wouldn't lead you astray. You have to sell. I put mine up and they are only regular chrome.
June 16, 2010 at 2:50 PM

dayf said…
Great googely moogely.
I guess I need to remove the gold Kershaw from your stack now.
Actually golds are useless, maybe I'll put it in grcl's stack. He never gets any love.
Methinks I'll have to take a Target Run on my lunch break.
June 16, 2010 at 2:53 PM

flywheels said…
Gotta agree with everyone else. Sell the sucker. I'm glad I let my Chrome Strasburg go...it bought me a few boxes of junk wax! Seriously though, if you want to try eBay and don't want to open an account hit me up. I'll do it for no charge to you. I'm a power seller and have 3000+ positive feedback. flywheels@yahoo.com
June 16, 2010 at 3:46 PM

And if flywheels doesn't out, I'd love to sell it for you too. I have way less feedback though. But as everyone's saying, the money this card is going for is worth a lot more to your collection than one SS card.
June 16, 2010 at 3:58 PM

gcrl said…
you could put it in my stack like dayf is doing (thanks dayf). but you should really sell it. unless you realize that you collect cards to have a card like this in your collection. but even then, you should probably sell it. nice pull.
June 16, 2010 at 8:35 PM

Jim from Downingtown said…
Sell now before it's too late! He's a ballplayer employed by a major-league baseball team in Washington DC. (Do you need any other reasons?)
June 16, 2010 at 11:36 PM

Play at the Plate said…
I'm going against the crowd and saying you should...who am I kidding, I would have that thing on Ebay as quick as I could scan it. Nice pull!
June 17, 2010 at 1:08 AM