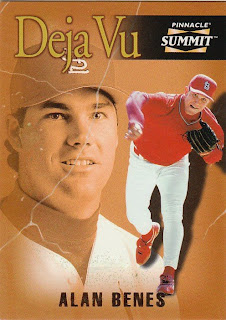 I recently picked up this card, which was very key because I believe I now have at least one card of every major league baseball player that I have interviewed. And I wasn't going to do one of these BWG posts if I didn't have the player's card.

A lot of people probably haven't heard of or don't remember Alan Benes. He's the younger brother of Andy Benes, the former Padres pitcher, who is featured in the large mug shot on the card. Both Alan and Andy pitched together with the Cardinals in the late 1990s, and that's when I talked to Alan, up in Montreal.

Alan was well-spoken, as a lot of pitchers are, and was happy to sit down at his locker and talk to me. But what I want to write about here, concerning Alan, is a brief comment on "prospecting."

I am not a prospector at all. I've said that before. I have no interest in "who might be a star." And I've already mentioned how much I despise "speculation." I believe it may be responsible for a wide variety of society's ills. It's killed ESPN. And it's at least responsible for giving birth to one huge black mark on this country, something otherwise known as talk radio.

But another reason that I am not a prospector, and why the vast majority of card bloggers aren't prospectors, is because it is so freaking hard to be successful at it. Predicting who is going to be the next great thing is brutal.

Have you looked at the players who have gone No. 1 in the major league draft each year? Sure, there are some no-brainers like Ken Griffey Jr., Chipper Jones and Alex Rodriguez. But there are picks like Steve Chilcott, Al Chambers, Shawn Abner, Brien Taylor and Paul Wilson, too.

So if major league baseball teams, who have put untold sums of money, time and resources into scouting, can come up with a sure thing barely half the time, then what chance does a card collector with no connections have?

Take the Benes example. I talked to the late, great George Kissell about Benes. Kissell was the longtime, legendary Cardinals coach who I've written about before. He was considered one of the smartest, if not the smartest, man in baseball by loads of players and coaches over the years. Kissell knew talent, shaping careers of players like Joe Torre and Terry Pendleton.

So, when Benes came up in my talk with Kissell, he said this: "Alan Benes, he's going to be a star."

If the man who advised Stan Musial and taught fundamentals to just about every Cardinal player to come to the majors in the last 60 years can't get the prospecting thing right, then what chance do we have?

Yeah, I know, some select people are really good at prospecting. And it wouldn't be any fun if you didn't have to guess whether someone was going to be good or not. But for me, the whole prospecting thing is just riddled with failure. I have enough of that in my life. I'll stick with the part of the hobby that makes me happy.

And here's the part that makes me happy: Hey! I found an Alan Benes card! I talked to him once, you know.

Johngy said…
I liked the Benes Bros., all 3 of them, although Adam never made it to the bigs. Alan did spend time in Chicago though.
Oh and I have cards of every player I ever interviewed...all 5 of them! I have a long way to catch up with you.
May 14, 2009 at 9:37 PM