Here's to a long life 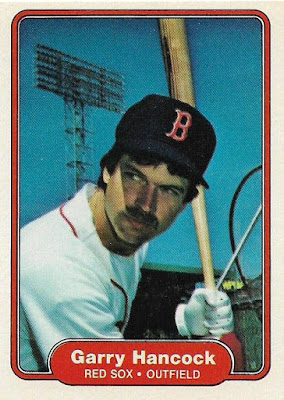 I stumbled across the death of Garry Hancock today. His passing more than 20 days ago didn't make a peep on the usual places I frequent, which is why I'm just hearing about it now.

Hancock's career was brief, and his death is notable only to those who knew him, and kids like me who grew up in the late 1970s and followed the Red Sox. Hancock, who hit .303 at Pawtucket in 1978 before the Red Sox were prompted to call him up, was one of those hopeful prospects from that period who my brother and I clung to in our continuing quest to ward off the Yankee ugliness of that time.

Hancock didn't end up making the impact we had wanted. He was just another in a line of Boston prospects during that time -- between Fred Lynn/Jim Rice and Wade Boggs -- that disappointed.

But his death at a too young 61 still struck me, and was made all the more stunning when I remembered this card: 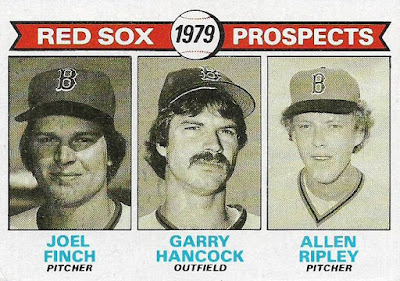 Allen Ripley died at this time last year. That's two guys on a card from 1979 that are no longer with us. (Only Joel Finch, the one guy here who never got his own Topps card, is still around).

That is way too freaky, you guys. I still remember many parts of 1979.

But instead of getting depressed about it -- my mortality and all of that -- I ended up going in the opposite direction.

In the course of reading about Hancock, I happened upon a list of the 100 oldest living former major leaguers. Why not, right? Instead lamenting players who died too young, why not look at some former players who have cheated death?

It turns out I don't. The oldest living former major leaguer at this moment is Mike Sandlock, a former catcher who just celebrated his 100th birthday a couple of weeks ago. He has a handful of cards. It looks like he was signing for Topps a mere 12 years ago, which is cool. But I don't have any of the cards.

The oldest living former player for which I have a card is Hall of Famer Bobby Doerr, who is fourth on the "oldest living" list at 97 years old. 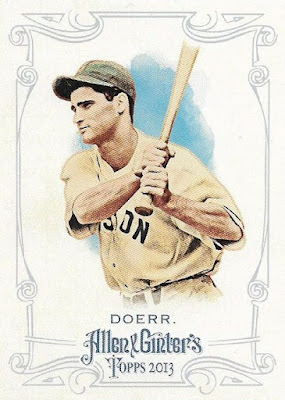 But that's kind of cheating, because this is a 2013 Allen and Ginter card, not exactly issued during the time when Doerr was playing. 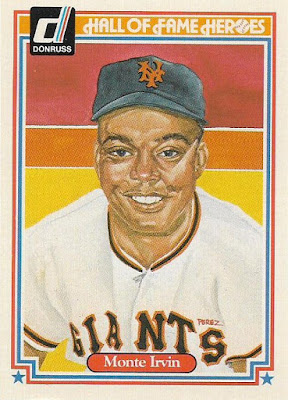 This card, too, of the eighth-oldest living former player, Monte Irvin, was issued long after Irvin's Hall of Fame career. While retro issues like this 1983 Donruss set come in mighty handy for thrifty collectors like me, it's not really what I was going for.

I want a card that was issued of the player while he was playing to illustrate exactly how long ago it was.

So I went down the list, and I did come across several old cards of old players that I do have. The one that is highest on the list is 20th. 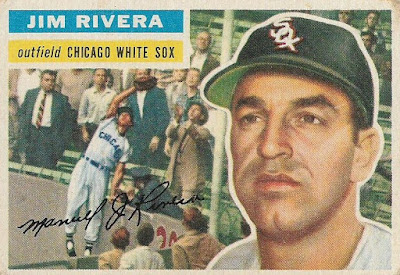 "Jungle Jim" Rivera turned 94 in July. Known for his hustle, speed and diving catches, Rivera started his career in 1952 at age 31 and retired at age 40 in 1961. He retired from the restaurant business in 1990, and is now the oldest living former major leaguer for which I have a card from when he was playing.

After going through that list, I felt better. So, I highly recommend doing the same for your collection.

Yes, baseball players die too soon. But why not toast the ones who have lived a long life, too?

Jim from Downingtown said…
I found that same list on Baseball-Almanac about a year ago. The oldest living players I have cards for are Sam Mele and Red Schoendienst, though what I have are their 1967 manager cards.
November 2, 2015 at 10:40 PM

gcrl said…
god bless red adams (number 23 on that list), even though he doesn't have any cards from his playing days (a few appearances for the cubs in the '40's). we've got cards of him as the dodger pitching coach, however.
November 2, 2015 at 11:17 PM

Hackenbush said…
My oldest on a playing days card is Wayne Terwilliger,
http://canthavetoomanycards.blogspot.com/2014/04/holy-terwilliger-batman.html
November 2, 2015 at 11:37 PM

Commishbob said…
Like Mark my collection has career contemporary cards of Irvin and Doerr. I have cards of #16 Wally Westlake and Rivera #20. I also have a game used Eddie Robinson (#17) first baseman's mitt.
November 3, 2015 at 8:47 AM

Anonymous said…
Interesting ideas. I met Doerr's godson in Cooperstown in 2009 - he (Doerr's godson) goes every year and stayed at the B&B we went to. I think Doerr went that year, but doesn't make it to the HOF induction any more.
November 3, 2015 at 11:35 AM

Brett Alan said…
I've got a '56 Topps Schoendienst. Most of the guys above him aren't well known, so maybe if I went through my 50s commons (not that there's that many) I might find one higher, but as far as I know he'd be the oldest.
November 3, 2015 at 5:14 PM

Fuji said…
Whoa. 100 years old. That's awesome. I'm almost certain I have a vintage cards of Irvin and Schoendienst. And might have an autograph of Doerr. Very motivated to find out now. Great post.
November 4, 2015 at 3:17 PM