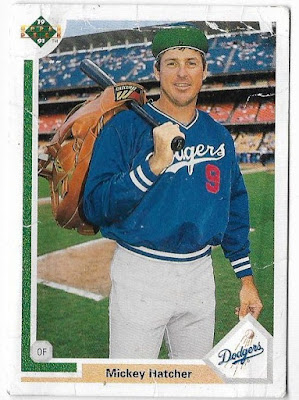 This is one of my wallet cards. If you look very closely, you can see Mickey Hatcher blinking as his eyes adjust to the daylight. He's been kept in a dark place for a long time.

That dark place is my wallet. This card and my other wallet card just sit there as I sit there, with no place to go. When the wallet card game started, I was filled with enthusiasm, but it soon became obvious that I'm not equipped for this game. My wallet card doesn't go anywhere so I can't photograph him in interesting places, because I don't go anywhere.

I don't travel for my job anymore and I certainly don't travel for the heck of it because there's no time/money. And when I do go to a restaurant or a movie or the park, I never think to take out wallet card and snap his picture.

So what am I doing playing this game?

Wallet card hides in deepest darkest corner of the spacious (re: empty) billfold when I page through what Junior Junkie is doing with his Griffey wallet card. Griffey parties on Bourbon Street and travels to the northernmost regions of the world. My wallet card hasn't been out of the state. Oh, the shame.

Here is some more shame: Junior Junkie sent me some cards recently and most of them I don't know what they are. 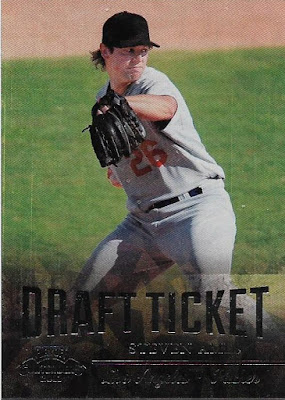 This is 2011 Panini Playoff Contenders card of someone named Steven Ames. It's called "Draft Ticket" -- I don't know why -- and it's numbered to /299 on the back -- I don't know why. The cap is also demonstrating some 1969-era blacked-out action.

OK, I think I just got the numbered part. If you tilt it, it sort of sparkles in a shattered glass sort of way. Oh, Panini, you card. 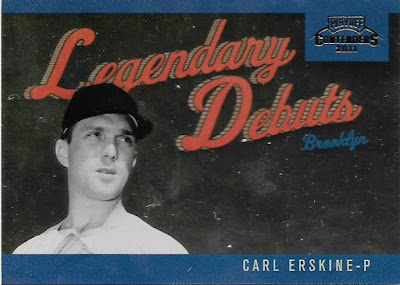 Here's another 2011 Panini Playoff Contenders card. Phew, I've heard of this guy. No shame here. I'm a bit disturbed by a blacked-out cap of Carl Erskine, like he might have been traded and I didn't hear about it. But the big red letters and shiny background calm my nerves. The back mentions his first three starts -- complete-game victories all. As usual for Panini, the type on the back is almost too tiny to read. Font size is your friend, card makers. 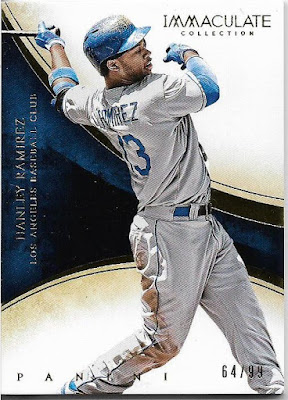 More Panini. Junior Junkie knows they're my favorite card company. This is a card from last year's Immaculate Collection. I believe that's a set you couldn't find in stores, so there's no chance for me. Shame, shame. This card is serial-numbered and will wreck a binder page because it's so thick. Panini also got lucky because Ramirez uses so much pine tar goop that he blotted out the Dodger logo for them. 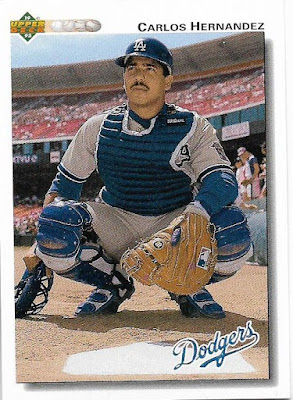 Hey, a card I know! This is a '92 Upper Deck card of Cardboard Legend Carlos Hernandez. But before I throw it in the dupes box, Junior Junkie made sure I noted that it wasn't just any '92 UD Hernandez card. 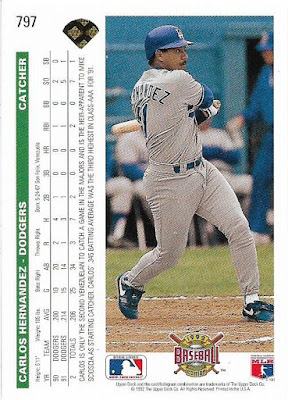 OK, there's no way that you can see that the hologram is gold foil. And I would have driven myself insane if I tried to collect stuff like this back in the day. And, yes, this makes me want to look through all my early '90s UD dupes for gold foil parallels. And hate myself afterward. And have an argument with myself about whether to include any I find in the Dodger binders. And hate myself for getting in an argument with myself over something so stupid. The shame, the shame.

Heh ... I just saw the gold foil twinkle in the sunlight. Kinda fun. 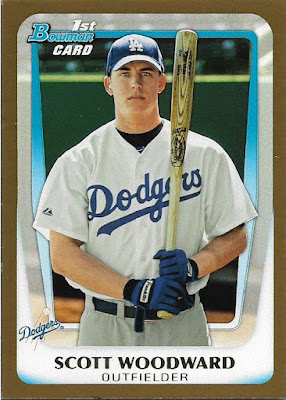 Ah, Bowman. A set filled with players I don't know. Shame washes over me with every pack. First, the not knowing, and then the "what'd I buy this for?"

Let's look him up.

Woodward played one year of rookie ball and hit .219. Then he played a couple years of independent ball and never hit above .230.

We make cards of these players now.

Still, I will happily add all of these to binders and look through them with glee while my wallet cards snooze in their darkened home.

I can't say I'm ashamed of where I live or regret not having the ability to travel the globe. I probably could find enough places around here that were interesting enough to show wallet card, and all this blog's readers. But for a true wallet card travel-log style experience, I think you need someone with more means and a little different personality than ol' night owl here.

I'm just a quiet dude in the middle of nowhere who collects cards.

No shame in that.

Zippy Zappy said…
"We make cards of these players now.

If you go to games and meet the players, it becomes a lot less shameful ;). Although it does set you up for inevitable heartbreak...
September 11, 2015 at 7:29 PM