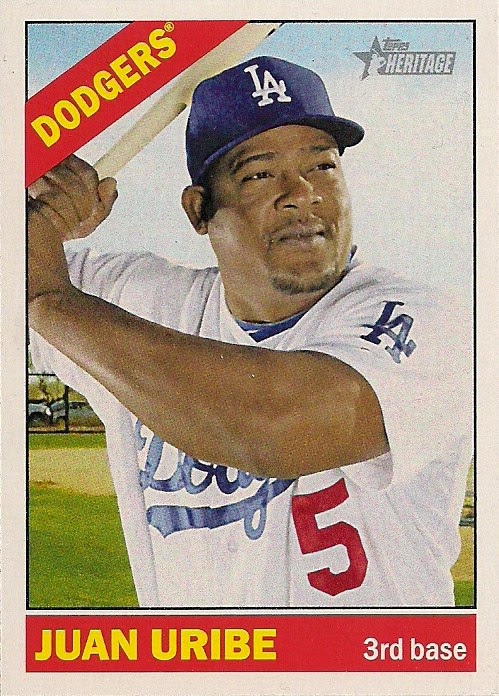 This post was basically written already by high-roller garveyceyrusselllopes, but I've already had the cards scanned for some time and the premise in my head for a few weeks, so there's no going back now. The brain wants what it wants.

I received some Dodger cards from Max of The Starting Nine earlier this month and the star of the package -- no respect to Juan Uribe here -- was the legendary Sandy Koufax.

He is all over Topps Heritage this year: 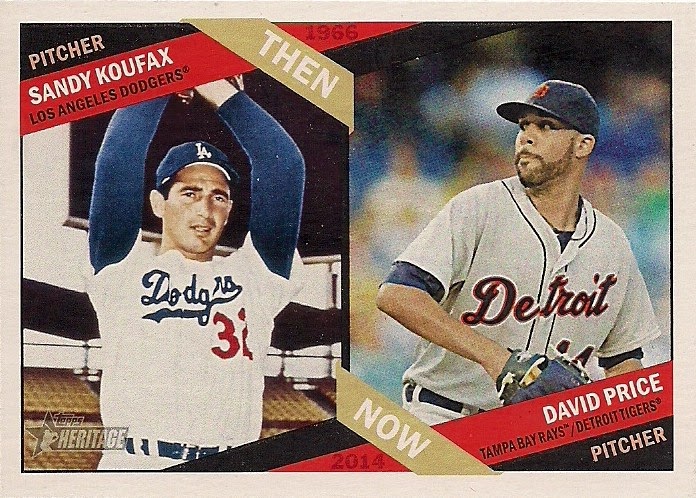 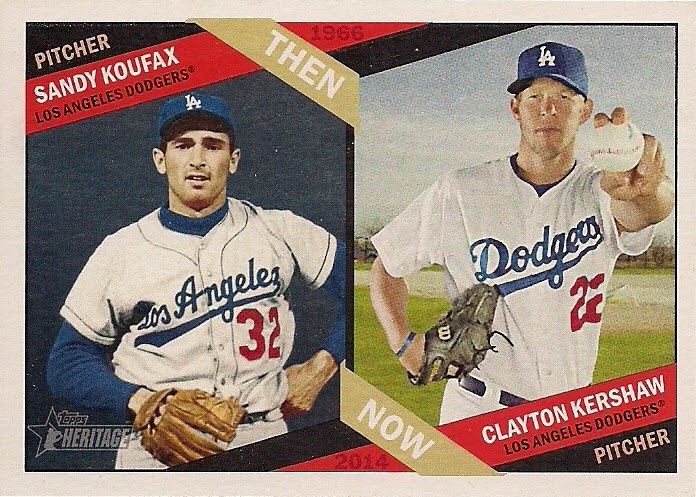 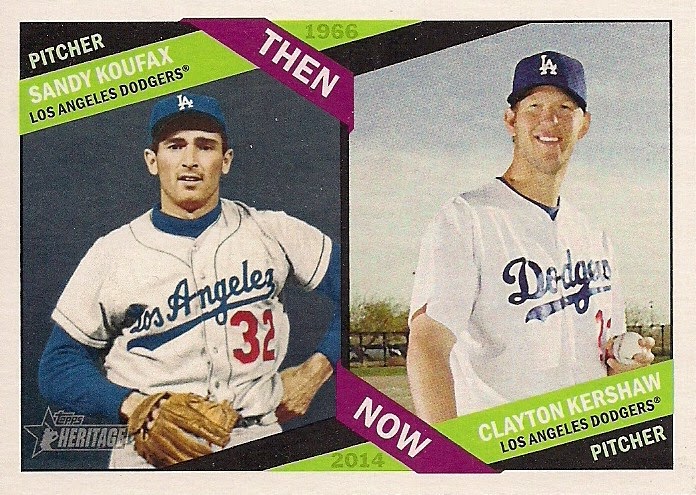 Add those to the one Then & Now card I had already ... 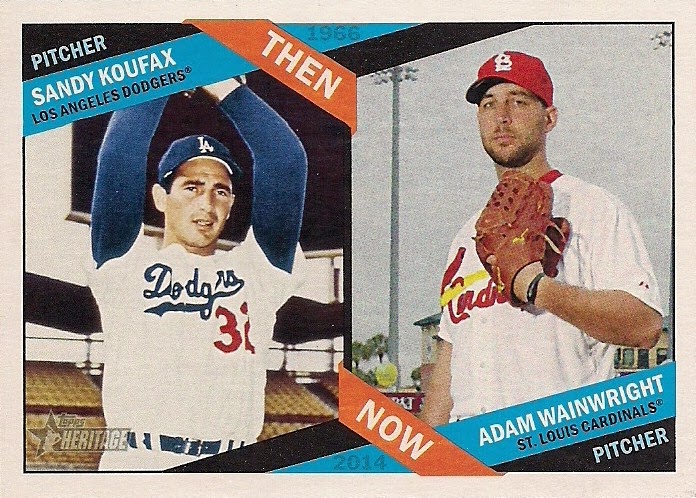 ... and then add a FIFTH Koufax Then & Now card that I don't own yet (it's another Koufax-Price combination), and that's a lot of Koufax. It's also a lot of collection-enhanced cardboard.

Here's what I mean by that.

You've all heard of "performance-enhancing drugs" -- those frowned-upon chemical aids that some players obtain in an effort to artificially inflate their stats, right?

Well, I say these cards here are along the same lines. They're artificially inflating my collection.

Pretend you don't know how much Koufax has infiltrated Topps products over the last four years. What would you say to me if I told you I have more than 130 cards of Sandy Koufax?

You'd probably bow to my awesome ability to collect one of the most sought-after players of all-time.

But only 19 of those cards are from when Koufax was playing. And only 19 more are from between 1975-2000. The other 92 are from this century, including 81 that are from the last four years.

I don't consider any of those 81, with the exception of maybe three or four, as crown jewels of my Koufax collection. The vast majority are insert filler and I wouldn't look twice if one of them disappeared. They are merely performance-enhancers for my Koufax player collection. It is as if my Koufax player collection received an injection of Koufax cards right in the gluteus cardboardius. My total of Koufax cards should actually be somewhere around 50 cards, not 130.

So what are you going to do -- you're asking -- toss a bunch of Koufax cards, limit it to only Koufaxes from the 20th century, can't you just enjoy the Topps Koufax love?

No, I'm not going to ostracize Koufax cards. Koufax is one of my favorite players ever, I need to have his cards, no matter how insignificant and hollow some of the cards seem.

But if anyone ever asks to see some of my Koufax cards, I'm going to show the ones that have some purpose behind them. Those are the sign of real collecting effort, no collection-enhancing involved.

Koufax probably won't appear in Heritage sets from next year forward -- since 2015 Heritage recognizes his last year in the majors -- unless Heritage dedicates a card to his Hall of Fame induction. And Topps has scaled back on Koufax in its other sets, focusing on other Dodgers like Fernando Valenzuela.

I have to admit, I won't miss all those new Koufax cards. And it's time to stop concerning myself with the latest Koufax insert, roll up my sleeves and display the collecting talent that I know I have. I'll be saving some pennies to find some of those Koufax cards from 1957, 1958, 1959, 1963 and 1964, as well as a few others.

When I land those, I'll know my mission was completed through old-fashioned collecting effort and ability. No enhancement necessary.

JediJeff said…
I don't mean this in a bad way: too much Koufax in Topps sets the past few years. With the glut of him on cardboard, it takes away from the power he has, in my opinion. I think the same about Frank Thomas. Give these guys you show year after year after year a few years off to make them feel new again when they show up.

gcrl said…
agreed. i was so stoked in 2000 when koufax appeared on legitimate cards (thanks upper deck) for the first time in a long time. now, i am pretty much unimpressed.
April 29, 2015 at 11:47 PM

Fuji said…
The good news is... it's Topps who's flooding the market with Koufax cardboard. Could be a bunch of logo-less Panini Koufax cards.
April 30, 2015 at 1:15 AM

Mark Hoyle said…
In regards to the player collections I try to keep mine to their playing career. I don't turn down any of the present day cards. I just don't drive myself crazy trying to track every last one down.
April 30, 2015 at 7:41 AM

BobWalkthePlank said…
Thankfully I don't have any player collection. I'm pretty sure it would drive me insane. Look at Clemente, he is in every set. I'm a casual team collector which is a lot less stressful. I can just cherry pick my favorite cards and leave the rest.
April 30, 2015 at 7:51 AM

Brian said…
I'm feeling that same feeling with Killebrew cards. On the flipside, I do really appreciate when Topps has rolled out various "Fan-favorites" subsets. Especially if it is a rarely used photo of those players that were not all-stars of Hall of Famers (but are probably never buying a drink in their team's hometown again).
April 30, 2015 at 8:31 AM

Tony L. said…
Totally agree with you on this. Having player collections of Eddie Mathews, Warren Spahn, Robin Yount, *and* Paul Molitor is like asking to be flogged.

Stubby said…
My understanding is that Topps (or Panini, for that matter), when it comes to retired players, has to deal with individuals and their estates to purchase the rights to use their likenesses on cardboard (as opposed to a more or less blanket deal with the Players Association for current players). That's why the Mickey Mantle train ended in recent years and everybody's flagship set is missing #7. The deal with the Mantle estate ended in 2012. So, if you're Topps, and you have a deal with the Koufax estate--let's say through 2015--you're going to pump out as many cards of Koufax as you can during that deal. And its silly to even suggest that collectors don't still get a little bit of a kick pulling a card of one of the game's greatest (Koufax, Mantle, Aaron, Mays, Seaver, Ryan, Reggie, Ripken Jr., etc.) from a pack...even a fairly worthless insert. And its one of the things I enjoy about Archives (or Hometown Heroes) that you can pull a "fresh" card of lesser heroes (like Teddy Higuera or John Olerud--who likely DON'T command a lot for the use of their images--though its also silly to suggest that those vintage names can carry a product or give a similar jolt to as many collectors as the acknowledged legends. Its also perfectly acceptable to be ambivalent about such cards as a team or player collector. As a Mets collector, I feel that I "must" add every base Topps flagship Mets card to my collection. That's the meat and potatoes. Anything else is gravy. I like gravy....but I don't need it.
April 30, 2015 at 7:06 PM